Illinois voters will decide on Nov. 8 whether revenue from the state’s transportation-related fees and taxes will be locked away for transportation spending only.

The proposed amendment to the state’s constitution is the only one to make it through the General Assembly and onto the Illinois ballot this year.

Voters will be asked whether money raised from sources like the use of highways and mass transit or vehicle licensing and registration fees should be devoted solely to transportation-related efforts, including the construction and maintenance of roadways and the cost of enforcing traffic laws.

Some critics of the proposal argue it lacks a fiscal safety net to divert money from transportation funds in emergency scenarios.

Supporters, which have dubbed the measure “the Safe Roads Amendment,” contend it would hold politicians accountable for using money within specific funds for costs unrelated to those funds.

Joining us to discuss the amendment are State Rep. Laura Fine (D-Glenview), who was one of only four state legislators to vote against the proposal; and Michael Sturino, president and CEO of the Illinois Road and Transportation Builders Association. He is a supporter of the amendment.

Below, Q&As with each guest.

Chicago Tonight: Why are you in favor of the proposed amendment?

Michael Sturino: For too long, Springfield has not demonstrated the type of accountability that’s required in order to create a more honest budget. When consumers pay a user fee for transportation projects through such means as taxes at the gas pump, registration fees and license renewals, there’s an expectation that those funds will pay back into improving the infrastructure that they’re using.

That, unfortunately, is not the case and the only way to ensure that the state legislator cannot continue to divert and raid those monies is through a constitutional amendment.

CT: Critics say your trade association has a vested interest in this amendment. What’s your response to them saying this is a way for contractors and construction companies to set guarantee themselves revenue for future projects?

MS: I would say, look, the vested interest here are the people of the state of Illinois. If we allow our primary asset, our transportation network, to deteriorate and to make us less economically competitive than we already are, we’re already being short-changed. We’re joined by a broad coalition of other advocates for transportation and frankly it’s a bipartisan one. This has broad appeal.

CT: Critics also argue that excess money sitting in these funds could be used towards education or social services, especially considering the state’s constant budget woes. Is walling off this money specifically for transportation going to negatively impact the state?

MS: I truly believe it’s going to improve the situation in Springfield. There’s no discipline, there’s no accountability, there’s a view by some in the General Assembly that specific funds can be raided willy-nilly because they do not have the resolve to make some of the tough budget decisions, like increasing revenues or making cuts.

We’re not suggesting at all that the other programs are not worthy. I’m a strong believer of a great public education system as well as several social service programs. But this will focus the General Assembly and make them understand that there are no shortcuts, there are no piggy banks to go to. You have to make some tough choices, that’s what you’re elected to do.

Chicago Tonight: Why are you against this proposed amendment?

State Rep. Laura Fine: I have a lot of concerns about the amendment. In our constitution it says that we need to provide for the health, safety and welfare of the citizens in Illinois. This includes education funding. To me, to lock up certain money puts transportation on the priority list. Don’t get me wrong – transportation is a priority in our state; however, I think it’s setting a bad precedent and opening up Pandora’s box to require funding to be set for a certain situation.

There’s a lot other concerns. With this amendment, it ties up all the funds. Let’s say Illinois is doing perfectly fine and then we have a disaster and our schools can’t open and there’s extra money set aside in this fund. We can’t use that money to resolve the emergency because they’d have to sit there in that fund. There are other states that have a lockbox but those states put an emergency relief valve in place. So in case there’s an emergency, if the majority of the legislature said we need this money for something else, they can’t use it. The Illinois legislation does not have that. Even in an emergency situation we can’t touch the funds.

CT: Would you have voted for a proposal that included an emergency exception like that?

LF: I would definitely feel more comfortable supporting it. But I feel like we’re almost putting the cart before the horse here. We’ve had a lot of talk about revenue in the state of Illinois and by putting this in place now, it’s not allowing us to continue the conversation about revenue. It puts us in a difficult situation down the line. I think it’s well-intentioned and we should focus on transportation because we’re a hub. But when they were writing the constitution in the 1970s, they thought a flat tax was a good idea and now we’ve been having a lot of conversations about changing the taxing system and it’s very difficult because of the way our constitution is in lockstep with the flat tax.

CT: A coalition advocating for the proposal claims about $6.8 billion was diverted from Illinois transportation funds for non-transportation-related costs. The Civic Federation said that number is closer to nearly $520 million. Regardless of the discrepancy, is the issue of diverting money from these funds a serious problem? We may need this funding, after all – according to a 2013 report by the American Society of Civil Engineers, Illinois is tied with Connecticut for having the highest percentage of roads in poor or mediocre condition.

LF: To me, this is a conversation about the fact that we have a revenue problem in the state of Illinois and we need to fix our budget and revenue system. We need to fix transportation. This is part of the reason businesses come to our state: we’re planes, trains and automobiles. That’s no question. That’s a priority. But it would be very difficult for me to tell my constituents that our school is not going to get any money from the state this year but we do have extra money sitting in this fund.

CT: This is the only proposed constitutional amendment to make it through the General Assembly and onto the Illinois ballot. It had plenty of bipartisan support. Why do you think that is so?

LF: I think part of it could have been, when they proposed this, we were concerned that our road projects wouldn’t be funded this year and many projects were midway through. I can’t speak for my colleagues, but I think that helped instigate it because we thought it could be devastating if these projects were not complete. This was a way to say, “Hey, no matter what, we’re going to have the funding for those projects.”

CT: What would be your hypothetical proposal to improve the state’s infrastructure?

LF: In a perfect world, we’d fix the revenue and tax system to make sure that we could fund everything that we need to fund properly and we wouldn’t have to rob Peter to pay Paul. Everyone sees where the state is fiscally right now and we are not in a good situation but we need to make sure that we improve that situation so these important projects, like human services, education, higher education and our roads especially, can be properly funded. 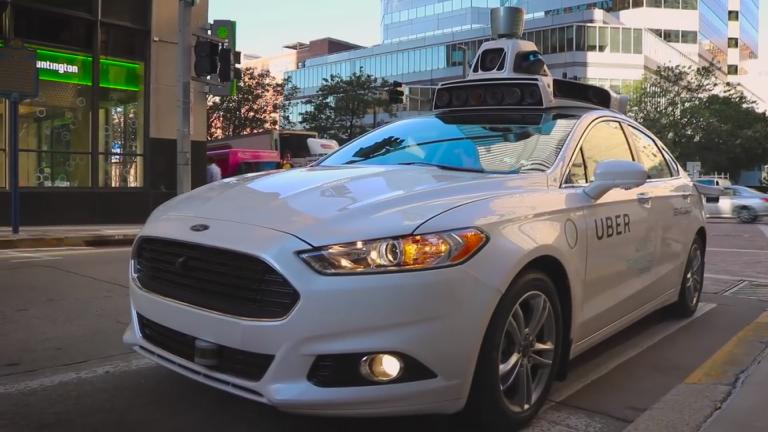 Sept. 26: The arrival of driverless cars is shifting into high gear. They've already pulled into Pittsburgh–should Chicago give them the green light? A transportation engineer tells us about the future of autonomous automobiles.