Chicago Public School teachers are back in the classroom to start the new school year–but for how long?

Teachers have been working without a contract since the summer of 2015, and some members of the union are calling for an October strike if the district and the union can't reach a deal.

Chicago Teachers Union President Karen Lewis says negotiations are cordial, and there are some places where negotiators from both sides can come to an agreement.

But after that it gets tricky.

The district would like to phase out the 7-percent pension pick-up. Tuesday, Lewis said she's not interested in a phase-out at all.

The district says the average raise would be more than 13.5 percent over four years–that includes cuts to health care. The union argues that the pay schedule for the district's proposed contract would mean a net loss of over 3 percent at the end of the four-year contract. The big difference there is how you count pay increases for seniority and education level.

Lewis repeated the union's call for more revenue sources, including the TIF fund, which they believe has around $500 million. It's another point of contention between the two sides.

“Getting them to understand the nature of our economic issues, we are concerned that we’ve had no raises for a year, so we had no raises, no cost of living, no steps and lanes, and we’re not going to go through that again for a year,” Lewis said. “So we want to make sure they understand that those are part of our demands … but also that we don’t want to have our pay cut, by losing 7 percent of our pension pick-up, which has always been compensation.”

Beyond the financials, there are concerns about staffing for non-teachers like counselors, nurses, social workers and librarians.

And the union says it has a hard time trusting the district when it makes promises, since there have been so many cuts to the classroom in the past four years.

“We’ve got 116 librarians in 550 public schools in the city of Chicago. It’s down from 500, four years ago,” Sharkey said. “We’ve seen nurses slashed, we’ve seen hundreds of positions cut out of special education, we’ve seen schools close–we know they’re planning to close more schools. … We’ve seen them continue to build privately operated charter schools that are politically connected to the mayor, even as they close public schools.”

The union is still being a bit coy about the likelihood of a strike. Lewis says anything is possible and that she's making no predictions, but says her members are ready to fight for a fair contract.

The union’s House of Delegates is scheduled to meet Wednesday, and sources are telling us they'll be voting on a strike date–some members are pushing for an October strike if there's no deal by then.

For its part, the district points to the fact finder’s report released in April, which is similar to that contract offer in January. But CPS says it’s open to hearing other ideas from CTU's leadership.

In a statement Tuesday, the district said it's hopeful that a strike can be averted, and its objective is to give teachers a fair raise within CPS' budget constraints.

“One of the most pivotal elements of that deal was the fact that we reached scores of individual agreements to make teachers' lives better, including paperwork, grading, evaluations and community schools.

“Since these issues have been CTU priorities for years, we are hopeful we can preserve as much of that framework as possible going forward.”

The last time the district made an offer, the union's big bargaining unit rejected it. There’s no word Tuesday on how close they are to a new offer. Lewis says they are slated to meet again Thursday.

Ray Salazar, who teaches writing at Hancock College Prep High School on the Southwest Side and blogs about education, is asking the union that if it does receive another contract offer from the district, that this time, leadership present that offer to the elected House of Delegates, instead of passing it through the big bargaining unit.

“The bargaining team is in a difficult position, because they have to represent so many of us, but they haven’t been elected into that position,” said Salazar. “Again, we have to go back to transparency: We don’t all know who they are, so it’s hard to communicate with them and get our perspective out there. I think if we want our movement to get an elected school board, to have credibility, we have to practice what we preach, essentially.”

In response to that, Lewis invited Salazar to be a member of the unit, but he's declined.

Lewis says as soon as they get an offer, the big bargaining unit will look at it. She feels if it doesn't pass muster with that group of educators, it wouldn't likely pass a bigger body or the full membership. 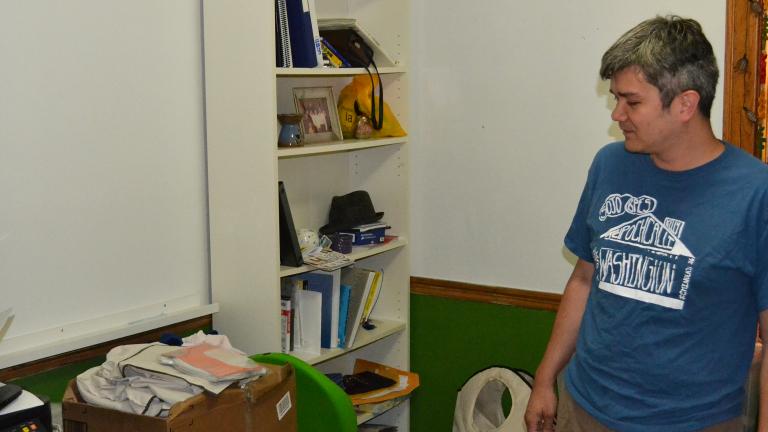 Laid Off CPS Teacher: ‘I’m Not as Optimistic This Time’

Sept. 6: Classes resumed Tuesday for students across Chicago, but many of the 500-plus teachers laid off in August could be left outside the classroom this school year.

Aug. 26: For the seventh straight year, children and teens will be guided along their daily commute by Safe Passage workers as they walk to school in the morning and back home in the afternoon.