Ask Geoffrey: What Happened to the SS Aquarama?

Why was the S.S. Aquarama at Navy Pier and what happened to it? What’s the history behind Navy Pier’s Grand Ballroom? And what is Groverland Park exactly? Geoffrey Baer dives into viewer questions in this week’s edition.

In the 1950's, I remember visiting the S.S. Aquarama at Navy Pier, but I can’t find anything about her time in Chicago. Can you? 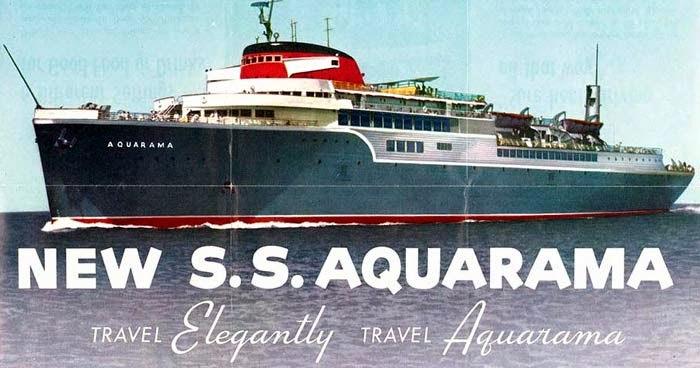 The S.S. Aquarama’s summer at Navy Pier as a floating entertainment palace in 1955 was just one stop in the Aquarama’s somewhat troubled history. She was built in 1945 as a troop transport ship for the Navy during World War II. She was originally named the S.S. Marine Star, and made only one trip across the Atlantic before combat ended.

In 1952 she was bought by a Michigan company whose owner wanted to convert the Marine Star into a luxury liner that would cruise the Great Lakes. At 520 feet long and 12,000 tons, the S.S. Aquarama was the largest passenger ship to operate on the Great Lakes. She could carry 2,500 passengers and 160 automobiles, with a maximum cruising speed of 22 miles per hour.

The Maritime Museum sent us a souvenir program from the Aquarama’s inaugural cruise – you can page through the entire program. 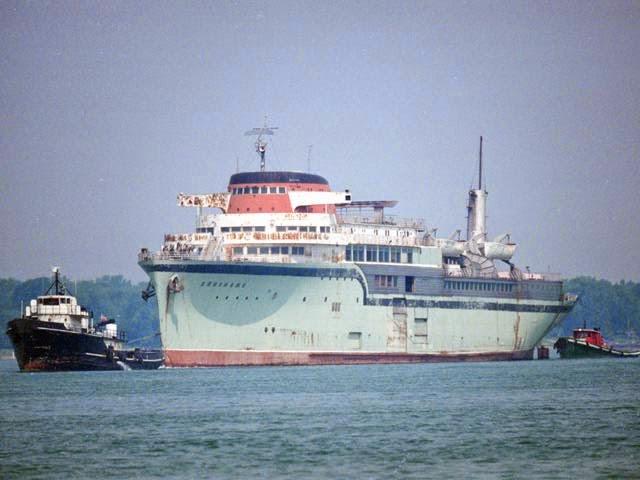 Passengers aboard the ship could enjoy numerous entertainment options – movie and television theaters, two dance floors with a stage large enough for an orchestra, bars and restaurants, even a game room, and the decks were connected by escalators. There was fun to be had outside the ship too -- the famous Tommy Bartlett water ski show at the Wisconsin Dells actually started in Chicago, and during the summer of 1955, ski jumpers and high divers put on a spectacle for Aquarama passengers.

After spending a summer in Chicago, the Aquarama went on to operate as a luxury cruise liner between Cleveland and Detroit from 1957 to 1962. But all that size and luxury came at a price as they found the ship’s size, operating costs, and the fact that there were no overnight accommodations onboard made her tough to run profitably. And, several accidents due to poor maneuverability gave her a reputation as an accident-prone ship unflatteringly nicknamed “Aquarammer” or “Crusherama.” She rammed a seawall in Windsor, Ontario. On her maiden voyage out of Muskegon, she dragged along the dock’s steel sheet-piling. And in another incident, she bumped into a docked U.S. warship, the U.S.S. Macon, in Cleveland.

The ship changed hands a few times, each time with big plans to revitalize and refurbish her that never quite panned out. In Buffalo, she sat for more than a decade to be turned into a casino. The S.S. Aquarama ultimately met her end in Turkey, where she was scrapped in 2007.

I attended an event recently in the Grand Ballroom at the very end of Navy Pier. Could you tell me more about the ballroom’s architecture and uses?
–Kevin Saunders, Edgewater

Navy Pier’s Grand Ballroom at the eastern end of the pier is truly a grand sight, with soaring steel arches accented by twinkling lights over a vast, open dance floor facing an enormous stage. At the time of its construction in 1914, the ballroom – which was initially called the Auditorium – was something of a technological feat according to Richard Fawell at VOA Associates, who helped restore it in the early ‘90s. The wide ceiling sweeping 80 feet above a column-free space was created by sets of three-hinged arches. This is a type of arch that allows for slight movement caused by the natural expansion and contraction of the building in hot and cool weather. The trusses supporting the vaulted space had to be assembled from small pieces because of the limitations in fabricating technology when construction was begun, according to Fawell.

The engineering mastermind behind the framework was E.C. Shankland, who had been the in-house engineer for architect Daniel Burnham’s firm. Burnham envisioned the Pier as part of the 1909 Plan of Chicago, but it was designed by a different architect, Charles Sumner Frost.  In addition to Shankland’s work on Navy Pier, which was originally called Municipal Pier, he devised the framework for Burnham’s famous early skyscrapers, the Reliance and Fisher buildings, and he oversaw the technical aspects of the 1893 World’s Fair.

The ballroom was restored in the 1970s to prepare for the country’s bicentennial celebration. During that renovation, the second floor exterior terrace was enclosed to make it part of the ballroom interior. For the most part, though, it looks the way it looked in 1916 when the pier was completed. 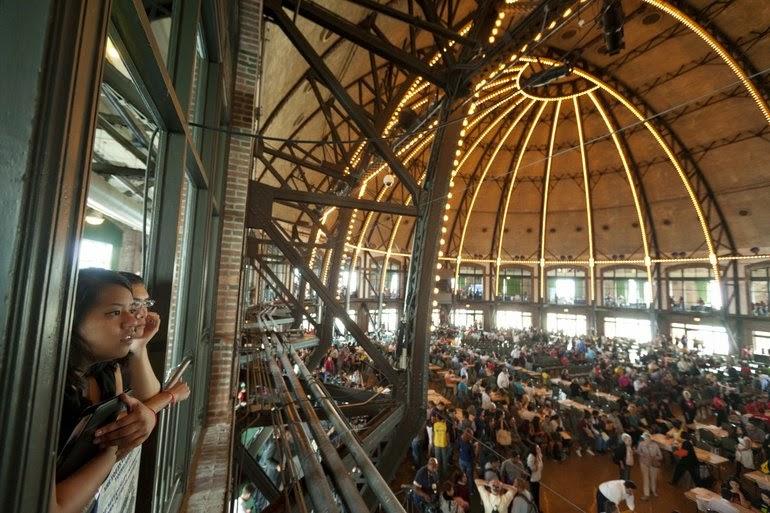 The Grand Ballroom has been used in a number of ways in its nearly 100 years in service. During the two world wars, it was a temporary home for military, Red Cross, and Home Defense personnel. Following World War II, the University of Illinois created a temporary, two-year branch campus on Navy Pier to accommodate returning veterans studying under the G.I. Bill. Classes, theater and dance performances, social mixers and pep rallies were held in the auditorium from 1946 until 1964 when UIC became a four-year university and moved to the West Loop. A photo from UIC shows the football legend Red Grange, the “Galloping Ghost,” at one of those pep rallies.

These days, the Grand Ballroom is the site of a wide variety of events public and private.  In April 2011, President Obama hosted a re-election fundraiser there. New Americans take their oath of citizenship in the Navy Pier Grand Ballroom, and in 2012 it was the site of an application event for young immigrants eligible for deferred deportation under the Deferred Action for Childhood Arrivals policy, which will sound familiar to anyone following the news of the recent child immigrant crisis. New Chicago police officers also take their oaths in the Grand Ballroom.

What can you tell us about Groveland Park? Is it considered a Chicago neighborhood or an early housing development?
–Mitch Gawlik, Homer Glen 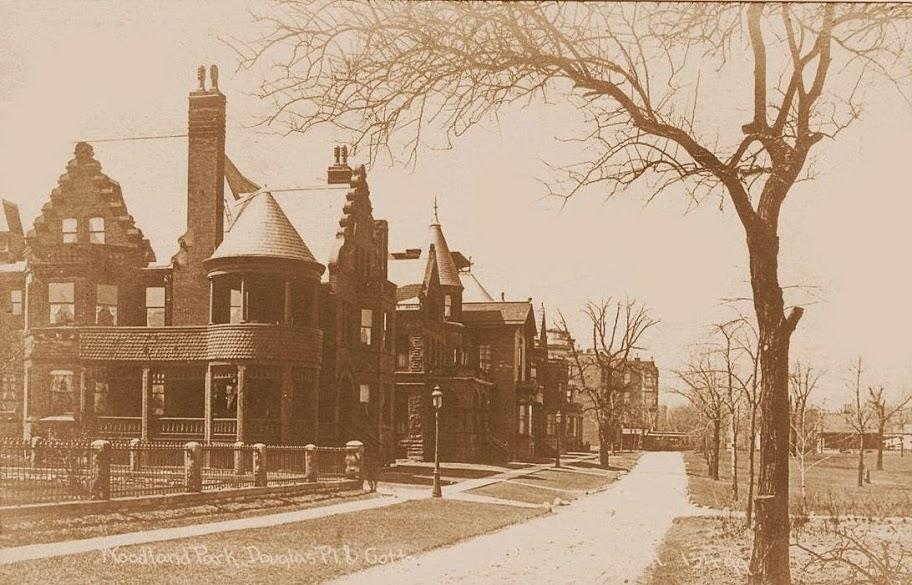 Groveland Park is a tiny Civil War-era enclave on the South Side that predates the Chicago Fire. It is in fact a very early housing development and a private community within the larger Bronzeville neighborhood. The Groveland Park Neighborhood Association’s vice president Phil Hague told me the association dates back at least to the 1870s.

The neighborhood borders the Illinois Central railroad tracks along Lake Shore Drive between 33rd and 35th streets. A gardener’s cottage greets visitors at the western end of the development and actual gardeners lived in it until just a few years ago. The old row homes along the meandering oval road, also named Groveland Park, surround a gently rolling, tree-lined central lawn. According to Hague, this park is actually state owned land, but the plat specifies that it is for the perpetual use of the residents as long as they maintain it. Homeowners pay an assessment per foot of frontage on the park.

Groveland Park is the only surviving testament to Stephen A. Douglas’s ambitious plans as a land speculator. The lawyer and politician is more famous for his fiery debates with Abraham Lincoln over slavery, but he also helped shape a large part of the South Side in the late 19th century. In 1852, then-Sen. Douglas helped arrange for a federal land grant allowing the Illinois Central railroad to enter Chicago via the lakeshore. Of course, the canny Douglas had already bought 70 plus acres of property along the route three years earlier in 1849. The railroad purchased a piece of Douglas’ property for almost twice what he had paid for the entire 70-acre site. On his remaining land Douglas started building his own estate called Oakenwald, and he set aside tracts for two residential developments: Groveland Park and the adjacent Woodland Park which was demolished in the 1950s. Douglas also donated some of the land to churches and schools, including for the first University of Chicago which opened in 1860.  It was short-lived and not related to the current U of C.

Douglas died of typhoid just as the Civil War was starting. The Union Army took over his land between 31st and 33rd streets to train Illinois soldiers, but the land soon became a camp for prisoners of war known as Camp Douglas, which was infamous for its poor living conditions. It’s since been the site of many archaeological digs. 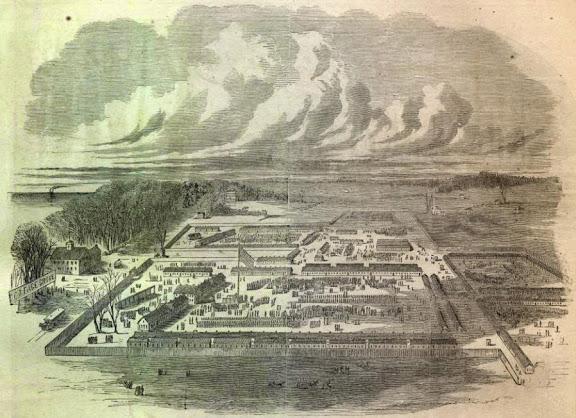 Once the war ended in 1865 and the POW camp cleared out, development resumed in the area, and Groveland Park became home to a number of wealthy Chicagoans, including Joy Morton, founder of the Morton Salt Company, who lived at No. 15 Groveland Park. Morton also created Morton Arboretum in the southwest suburbs and was a famous tree hugger. Hague told me he thinks the trees in the park are a legacy of Morton.

Hague also said Groveland Park has many long-term families and homes are often passed from one generation to another and rarely go on the market. The strong association fought hard to preserve Groveland Park during the era of urban renewal that saw so much of the surrounding area demolished and replaced with high rise housing.

A bronze likeness of Douglas still looks over what he helped create from atop the Stephen A. Douglas monument. The Little Giant himself is entombed at the base.

And it turns out Douglas’s wife Adele was a pretty good wheeler and dealer herself. The State of Illinois paid her $25,000 for the small piece of Oakenwald land his tomb sits upon in order to keep him in Illinois, after she suggested that he should be interred in Washington, D.C. instead.