Gov. Bruce Rauner today said the 30-year-old Thompson Center, once called the State of Illinois building, could bring in a hefty amount for the cash-strapped state.

The controversial building–right across the street from City Hall–has had its shares of admirers and detractors, but Helmut Jahn, the renowned Chicago architect who designed it, had some tough words about how Illinois has failed to care for his creation.

The governor says that the state has already gotten appraisals but he would not divulge what sort of value appraisers have put on the building and on that entire square block of property.

The only cost the governor did talk about was the estimated $100 million in repairs and upgrades that the building is badly in need of. You can see weeds growing on the exterior of the building; the conditions are even worse on the interior, from duct tape holding together old carpeting to reports of cockroaches throughout the structure.

There are currently more than 2,000 state employees there and another 280 who work in the retail and food businesses. The governor says the state workers would be moved to more cost-effective, state-owned offices around Chicago and even Springfield.

“The building has not been maintained or repaired, the retail lacks style and attraction.”

This isn't the first time a governor has wanted to ditch that property to help with state finances. Twelve years ago at the beginning of his first term, Gov. Rod Blagojevich proposed selling it, but that plan obviously fell through.

But now Gov. Rauner says it needs to happen and he wants it offered at public auction for cash within the next year.

"This is a compelling financial gain for the people of Illinois and the city of Chicago," Rauner said. "It takes a building, a structure, that is in significant disrepair, is very ineffective and very inefficient for taxpayers–I won't comment on the aesthetics, you're entitled to your own opinion–but from a pure financial point of view, this is a compelling opportunity for the people of the state.

"This building is ineffective for the people who work here, all of whom are eager to move somewhere else: It's noisy, it's hard to meet with your colleagues, it's hard to move through the building. ... Very hard to conduct effective work in this building."

The governor says he has "personally discussed" this with House Speaker Michael Madigan and Senate President John Cullerton. He says he's also talked about it with Mayor Rahm Emanuel and he describes all of them as being "forward-leaning and positive," although they still want more details.

He also said Attorney General Lisa Madigan and Secretary of State Jesse White–who have offices in that building–are open and positive. And he says his staff made courtesy calls to former Gov. Jim Thompson–after whom the building is named–and the world-renowned architect of the building, Helmut Jahn. The governor could only say that they appreciated the phone call.

But here is what Helmut Jahn said in a statement today:

"The original vision of Governor Jim Thompson and the architect Helmut Jahn to make the building a symbol for the openness and transparency of the state government, an active urban center in the city, and a lively urban and public place has not been upheld by the administrations that followed. The building has not been maintained or repaired, the retail lacks style and attraction. Governor Rauner has announced the state will sell and vacate it.

The best way to save the building, and to improve it, is to repurpose it. This requires upgrades to the retail and foodservice, marketing the large floor plates to innovative tech-companies, adding parking. For the unused FAR of close to 1 million square feet adding 24 hour uses, a hotel, apartments or condominiums, in short, making it the most exciting place in the city, with around the clock activity.

The architectural history is full of examples where such repurposing has brought new life to structures like this. This will require some changes be made. The building will only survive this way, and will become a landmark for the 21st Century."

The governor is of the opinion that no buyer or developer will likely want to keep the building and will probably tear it down. Rauner says for the city and state it's all for the best.

"The good news for the taxpayers in the city of Chicago is this should generate, depending on the size of the new building put in here, something like $20 million per year in new city and school taxes, for the benefit of local taxpayers. A lot of money," Rauner said. "Right now as a government building, it is not on the city tax rolls; this does not generate tax revenue for the people of Chicago. It's very unfortunate, because this is one of the most valuable, nicest blocks in the entire state."

One commercial real estate broker says the current commercial market is unlike anything she's seen in the last 20 years and she believes the plot of real estate will sell quickly, but none of the brokers we spoke with were willing to go out on a limb and speculate how much it might go for.

Here's a statement the Chicago Association of Realtors sent us:

“This is a very complex transaction given that not only are you looking at having to tear down an aging building, but it is unclear what the ultimate use for that property would be. Factor into that, the likelihood that there would be potential zoning issues which also could have an impact on valuation. There could be unknown issues with either the building or the property on which the Thompson Center sits which would only become apparent after thorough review.

While the Chicago market right now is experiencing a robust period of growth, it is important to note that conditions may be different in the perhaps 4 to 5 years it would take to complete a project of this magnitude. All of this said, it is clear that this property would have great value no matter which use it is put to. It has several attributes any developer would look for, including a large space to which to work, access to transportation and a prime downtown Chicago location.”

The governor also had something to say about the increase in the property tax exemption Emanuel needs from Springfield to protect low-income homeowners as a massive property tax increase seems to be on the way for Chicago. 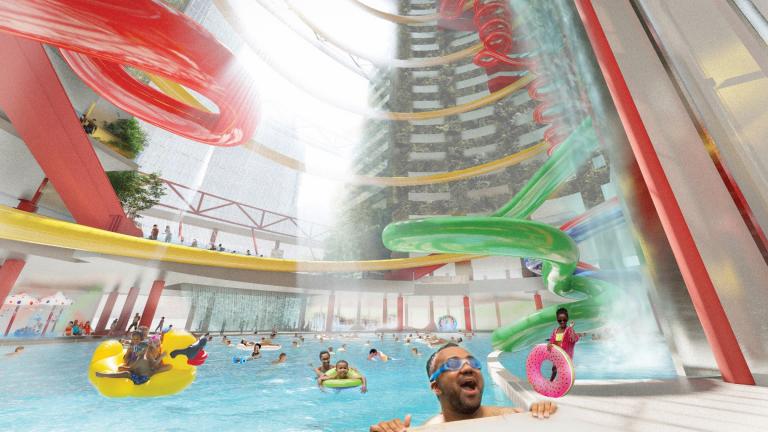 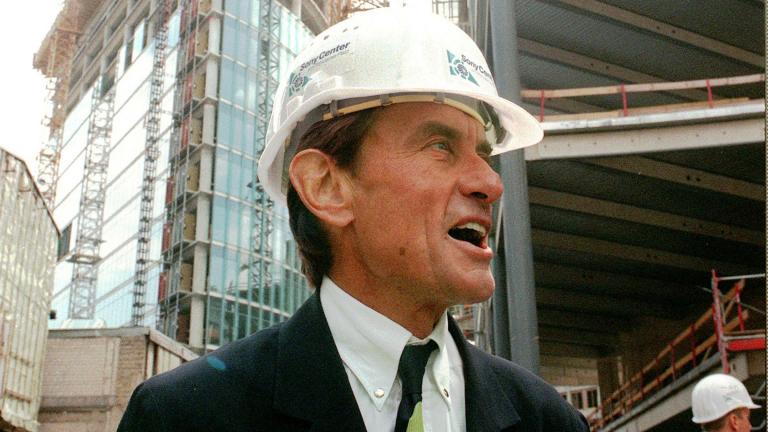