Geoffrey Baer tells a sweet South Side success story, tests the waters at an unusual car wash, and finds the facts behind a fascist monument in this encore edition of Ask Geoffrey, which originally aired on Chicago Tonight on Feb. 11, 2015.

Watch it again on July 29 on Chicago Tonight, or watch the video below right now.

I saw a photo showing something called the Auto Wash Bowl on a history Twitter feed. What was it? -- Lisa Tipton, WTTW 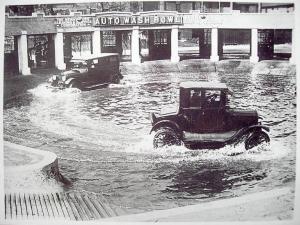 The photo in question is on the right. It’s from 1924 and shows a newfangled type of car wash that stood at the northwest corner of 42nd Street and South Michigan Avenue. There was at least one other auto wash bowl in Chicago–the concept actually originated in St. Paul, Minn. It was patented in 1921 by inventor C.P. Bohland, who opened two locations in St. Paul. He devised the bowl as an easy way to clean mud off of the underside of cars. Back in this early age of motoring, roads were often unpaved and muddy, and that mud would get caked on the underside of the car and the wheels–lbut a spin in the nifty Auto Wash Bowl took care of that.

The nearly 80-foot-wide, ridged concrete bowl was about 16 inches at its deepest point in the center. Customers paid 25 cents to an attendant who strapped a protective rubber cover over the radiator. Patrons would then enter the bowl via a ramp and drive their cars around and around the bowl at a speed of about 10 miles per hour. The ridges in the concrete would vibrate the car and the water, creating a sloshing action that helped wash away all the mud from the chassis and wheels. The process took about three or four minutes. The car would then exit the bowl where patrons who wanted a complete car wash could enter one of the bays where the rest of the car would be cleaned. On a busy Saturday, about 75 cars per hour would go for a spin in the wash bowl.

Once the idea had proved successful in St. Paul, the patent holder began advertising in other cities to franchise the operation. The first Auto Wash Bowl in Chicago was built by a Chicagoan named C.G. Burkhartsmeier on the southeast corner of Diversey and Elston on the city’s North Side. Burkhartsmeier bought the rights in 1924 and built his bowl and service station at a cost of $20,000. A fun note: The architect on the job, William C. Presto, was a former employee of Louis Sullivan’s who later gained fame for giving the destitute Sullivan his last commission, designing the façade of the Krause Music Store in Lincoln Square and the lavishly decorated Art Deco building at 6424 N. Western.

There is an old column on a tall base located between Soldier Field and the lake. I would love to learn more about its origins and what it is still doing here in Chicago. -- Tim, Oriole Park

The column is known as the Balbo Column and the reason our viewer asks why it’s still standing there might be that it was donated to Chicago by the Italian Fascist dictator Benito Mussolini! It’s a 2,000-year-old Roman column atop an engraved stone pedestal, as our viewer said, just east of Soldier Field. The column was originally one of eight on an ancient portico overlooking the sea at Ostia, Italy. Mussolini had it shipped to Chicago to commemorate the 1933 transatlantic flight of General Italo Balbo, Italy’s Marshal of the Air Force and heir apparent to Mussolini.

Balbo led a squadron of 24 seaplanes on a 16-day journey from Rome to Chicago in what at the time was the greatest feat of Italian aviation. The squadron flew over the Century of Progress World’s Fair at Northerly Island and landed in Lake Michigan near Navy Pier, where the dashing Balbo blew kisses to ladies who watched the landing. For the following three days, Balbo and his fellow pilots were feted at balls and dinners where they charmed Chicago society families like the McCormicks and the Wrigleys.

The next year, 1934, the World’s Fair re-opened and Mussolini sent the column to be placed in front of the Italian Pavilion in August of that year. It has remained on that spot ever since, though the pavilion is long gone. In addition to the column, the city had also renamed 7th Street as Balbo Drive a few weeks earlier.

It might seem strange that Chicago agreed to install what could be viewed as a monument to fascism, but in 1933-34, the world hadn’t yet fully seen where fascism, or for that matter Nazism, were going to go.

Chicago’s 70,000 Italian Americans were fiercely proud of their heritage and excited to see Italy glorified at the fair. A cigarette girl working at the Italian Pavilion recalled that everyone wore fascist buttons and learned a fascist song because they “were real proud of being a fascist, but we didn’t know what it meant.” Forty thousand people turned out for the unveiling of the monument. Balbo did not attend personally, but he spoke to the adoring crowd via shortwave radio from Italy.

Balbo died under unusual circumstances in 1940 when his plane was shot down over Libya by friendly fire.

In the years since the column was installed, there have been a handful of campaigns to remove reminders of Balbo from the city, but most were focused on changing the street name. Julia Bachrach at the Chicago Park District said that there haven’t been any serious proposals to remove the column. She also made the point that if we started removing monuments because of political controversies, we would have a very small collection remaining in the parks. And, she thinks that keeping monuments such as the Balbo column provoke thoughtful discussion and study.

One more note: Though one might expect it to be made of marble, the column is not. It’s made of breccia, which is kind of nature’s own concrete. It’s a naturally occurring rock made up of broken fragments of other rocks. The marble Corinthian capital seems to be a modern addition, put on top when the column came to Chicago. 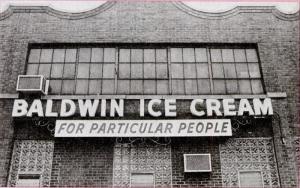 At one point, Baldwin ice cream was a fixture in major grocery chains throughout the Midwest. Although they don’t make ice cream anymore, the company still exists, and it’s a nearly century-long success story of an African-American and women-owned enterprise.

It started in 1921 as a single ice cream parlor in the “Black Belt” on Chicago’s South Side. The founders were seven postal workers who called the shop Seven Links Ice Cream, because they saw themselves as links in the chain of their business. One newspaper account said that people would line up around the block, in part because the clerks never weighed the ice cream they put in the cones. They just packed in as much as possible.

By the 1940s, the company had opened seven locations throughout the South Side and had renamed itself Service Links Ice Cream Company. In 1946, one of the founders, Tuskegee Institute alumnus Kit Baldwin, bought out his partners, renamed it the Baldwin Ice Cream Company, and began selling his ice cream through South Side grocers helping Baldwin become a household name in African-American Chicago (although store sales at that point were secondary to the parlors). He also opened shops at O’Hare Airport, which gave the company an even higher profile.

Kit Baldwin died in 1961, and within 10 years the company saw three presidents pass away. Though she had no experience running a business, the widow of the third president, Jolyn Robichaux, took over as president, saying, “Why should I waste my time? I’ll just do it myself.”

Right away, she had a problem to confront. Her eight parlors on the South Side were losing customers as African-Americans moved to other parts of the city and suburbs. So she put almost all of the company’s energy into distributing packaged ice cream through grocery chains – and it paid off. In her 20 years leading the company, Robichaux increased sales 12 times over, and got her product into major grocery chains like Jewel, Dominick’s, Omni and Cub Foods throughout the Midwest.

Robichaux retired to Paris in 1992 and sold the company to Eric Johnson, son of Johnson Products Founder George Johnson. The company is now called Baldwin Richardson Foods and headquartered in Frankfort, Ill. in 2000. They stopped making Baldwin ice cream last year, but they still make dessert toppings and condiments at two factories in New York State.