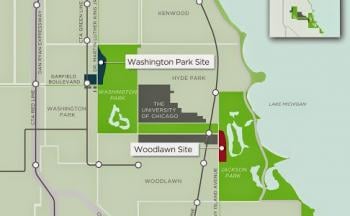 There is new evidence that The University of Chicago is once again the far and away favorite to land the Obama Presidential Library. A poll conducted by the Obama Foundation purports to show a majority of residents in the neighborhood supporting the proposal to locate it in a park. But that hasn't changed the minds of some park supporters who are threatening legal action.

The poll of 600 residents surrounding Washington and Jackson Parks shows a clear majority supporting the proposal to locate the museum within park space. It was commissioned by the Obama Foundation and leaked to the press, which could signal that The University of Chicago’s proposal is the likeliest to land the bid, and assuage concerns the Obamas may have that the sites are controversial.

But there is the threat of a lawsuit from the park advocacy group Friends of the Parks, who we’ve learned will meet with the Obama Foundation and its chair Martin Nesbitt next Wednesday, ostensibly to mitigate talks of a potential lawsuit.

The land has been given over to the city from the Park District and now needs City Council approval. A Park District official said today the foundation asked for these sites – which led to contentious debate with Friends of Parks’ Cassandra Francis, who says other vacant lots should’ve been considered instead.

“Why are we not talking about the 11-acre site across the street,” said Francis. “Why is it only in a park?”

“We are not in a position to say to the foundation, ‘yes we want you to come here, but no, you can’t have the sites that you asked for,” said Park District Board Member Avis LaVelle.

“You can certainly try to persuade them what’s best for the city and try and protect the parkland for future generations,” Francis responded.

“We can say no, and then watch them go elsewhere,” LaVelle said.

LaVelle also says talks have begun to identify other city land that could be restored as parkland, to reciprocate for the lost land. She says land swaps between the city and the Park District happen regularly.

“We will do a one-for-one or better swap of land,” LaVelle said. “We are the beneficiaries of the city’s largesse when it comes to land. We’ve given the city 45 acres in the last several years. The city has given us more than 1,200 acres for increased park space. And there are other parcels of land we can be given. There are no opportunities to position a facility like a Presidential Library in a residential community without taking the homes of the people who live there.”

Meanwhile, we shouldn’t forget that there is another Chicago proposal out there – the bid from UIC to locate it in North Lawndale.

“It’s important for people in Chicago to know that it’s not just south side versus New York,” said UIC bid spokesman Marcus Betts. “There’s a very strong west side bid that’s ready; 23 acres were cleared and prepared to receive a major project like the Obama Library. So, we’re here. All is not lost if they chose not to locate on the south side.”

The two Chicago bids join ones from Columbia University in New York and Hawaii. A decision is expected from the Obamas in the coming weeks – before the runoff election.