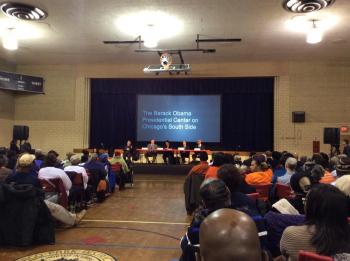 Chicago residents got another chance today to sound off on whether or not they support an Obama Presidential Library on protected parkland. The plan put forth by the University of Chicago to lure the library here has caused controversy, with one group even threatening legal action if it’s built in a park.

An overflow crowd filled the field house in Washington Park today, one of the final sites selected for consideration by the Obama Foundation.

Members from the Park District and The University of Chicago heard from both supporters and detractors of the plan to locate the library there or in Jackson Park.

The U of C said the Obama Foundation had singled out those two sites as finalists – and that only a park could offer the kind of acreage they’re looking for. They, and supporters of the plan worried that they would have to go with these sites or lose the library altogether to New York.

“How many of you would be happy if New York City won?” said Robert Blackwell, president of the nearby DuSable Museum. “If nobody is going to be happy, my view is we need to get to it.”

“A south side location, and specifically a Washington Park site, is the best option,” said Ald. Pat Dowell (4th).

Once the hearings conclude, the Park District would vote to relinquish 20-acre parcels of land in Washington and Jackson Parks to the city, and then the city would vote to give it to the Obama Foundation.

The process was quickly put together by the mayor after the Obama Foundation expressed concern that U of C didn’t own the land it was pitching.

Opponents to this plan say parks are sacred and should not be built on. 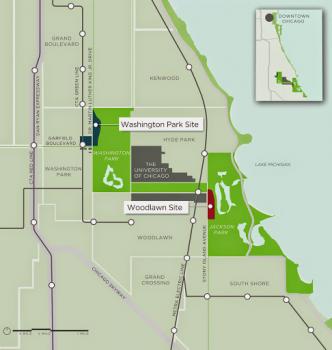 Other opponents noted the University owns an 11-acre slot of land across the street from Washington Park on King Drive that would be a more suitable choice for the museum.

“That’s plenty of space for the building,” said local resident Robin Kaufman. “If they want a garden in the park, they’re welcome to do that. University of Chicago is on a massive land grab. They want to remake the south side.”

But Susan Sher, who is former Chief of Staff to First Lady Michelle Obama and currently leading The University of Chicago’s efforts to land the library, says that site is not optimal.

“That has challenges, but that’s possible, but it would be a more vertical library,” she said. “It wouldn’t have the spread-out beauty that is typical of a presidential library.”

The group Friends of the Parks has threatened to challenge this process of turning over the land to a private entity.

Sher said she doesn’t believe that that climate of uncertainty would scare away the Obamas – mentioning that George W. Bush’s library faced a lawsuit as well – so legal action is sometimes par for the course.

Also, UIC has pitched two sites: one in Lawndale and one near the Circle Interchange. They are still in the running, as is Columbia University in New York and The University of Hawaii.

The city says that if the Obamas choose Washington Park over Jackson Park or vice versa, the unchosen swath of parkland immediately gets turned back over to the Park District. A decision is expected in the next few months.

Local resident Robin Kaufman shouts "U of C is in midst of massive land grab!" Begs for museum not to locate in park