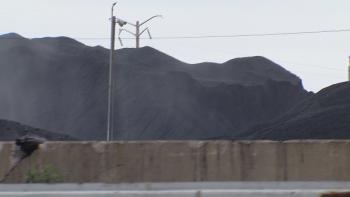 The company that stores most of the petcoke on the city's southeast side is trying to get the city to relax its regulations.

Petcoke is a petroleum byproduct, and most of it along the Calumet River comes from the BP oil refinery in Whiting, Ind. Southeast side residents were galvanized more than a year ago when a violent wind storm blew a dark cloud of petcoke dust into their neighborhood

The piles of petcoke on the 80-acre site owned by the Koch Brothers’ KCBX company are smaller now. Last year, they were twice as high. The mountains of petcoke brought a storm of protest from community groups concerned about dirty black dust blowing off the piles into their neighborhoods. 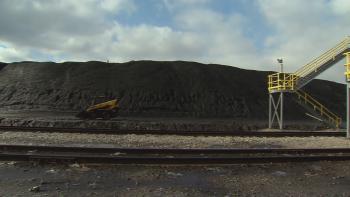 “Historically, our pile heights have been about 60 feet, but there is a requirement to have them at 30 feet which is where they are now,” said KCBX spokesperson Jake Reint.

The piles are at 30 feet because community groups pushed the city to enact new regulations requiring smaller piles. KCBX also installed nine air monitors on their two sites at the request of the U.S. EPA.

Peggy Salazar from the Southeast Environmental Task Force said none of it would have happened if frustrated neighborhood residents hadn't organized.

The EPA now requires KCBX to provide hourly reports on air quality, seven days a week. The monitors measure the amount of particulate matter or dust in the air. KCBX claims that the results from the air monitors show that the $10 million dust suppression system, which includes 42 water cannons, has worked.

“We have over 200 days, almost 250 days now, of air monitoring results, that show the air quality around our facility is well within national air standards,” said Reint.

But, on June 3, 2014, KCBX was hit with a notice of violation from the EPA. The EPA found that on two dates, April 12 and May 8, KCBX was in violation of national air quality standards.

The notice also stated that excessive emissions of particulate matter or dust could cause serious health problems, such as: 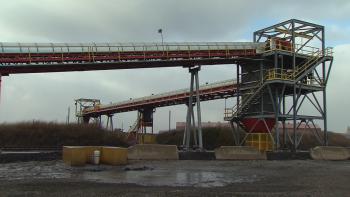 But KCBX disagrees with the EPA's analysis of the air monitor results. The company maintains that on the two days it was cited for air quality violations, the dust did not come from its facility.

“Everything is coming back showing that our system is working,” said Reint. “Petcoke dust, coal dust, is not leaving this facility in a way that would adversely affect air quality.”

The EPA says the violations continue to be under investigation. Josh Mogerman, spokesman for the environmental advocacy group, the Natural Resources Defense Council, is skeptical of KCBX’s position.

“I think we'll wait and hear what the EPA has to say about it,” said Mogerman. “I'll take their word over KCBX's on this issue. But, it is clear again that there has been petcoke blowing out of this facility.”

Peggy Salazar has her own method of testing for petcoke.

“We're going to wipe this resident’s car that's parked here, and we're going to find out if those water cannons are working and making a difference,” said Salazar.

After using a clean yellow sponge to wipe the car, Salazar points out the black dust on the sponge. 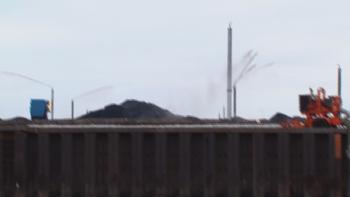 Salazar is also concerned that KCBX is asking the city to make exceptions to the city’s new petcoke regulations.

The piles have been brought down in size. They were 60 feet before the new city regulations kicked in; they're now down to 30 feet. But KCBX says they’d like to have them back up to 45 feet.

The city has not yet ruled on the request to raise the piles up to 45 feet. KCBX calls the variance request essential.

“Our ability to stay in business and continue to meet our customer commitments depends on having a little more flexibility with our pile height,” said Reint. “Our hope is we're going to be able to operate more in a 45 pile height limit range.”

The new regulations also call for KCBX to fully enclose the petcoke piles within the next two years. KCBX says it will take at least four.

“It’s more than a giant shed; it's a very big complex,” said Reint. “A lot of engineering is required to develop a complex that can enclose the product, but then also be flexible in order to accommodate our customers’ needs.”

But residents like Salazar worry if piles are allowed to go to 45 feet and they are not enclosed for four more years, petcoke dust will cause more problems.

“With their money, I don't think it takes four years. I mean, they were able to put in their $10 million, according to what they told us anyway, water suppression system, their new conveyor belts, a new track, and that was all done I think within a year and a half,” said Salazar. “So, if they were able to do that in order to get the business up and running, I'm sure they can enclose it sooner than four years.” 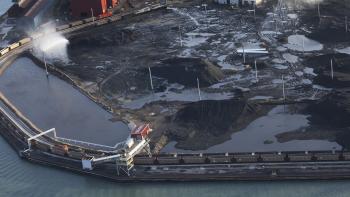 Aerial photographs show another growing concern. Long lines of railroad cars carrying petcoke sit uncovered in the area. Rail cars are five deep off the corner of KCBX's north terminal facility. Since the cars are uncovered and out of reach of the water cannons, petcoke dust could be blown into the neighborhood.

“Questions regarding rail should be addressed by the railroad. But, as you can see, the trucks that come in and out of our facility are covered. That's what our responsibility is,” said Reint.

“Ultimately, this stuff is coming to their facilities and we would hope they would take action to secure it,” said Mogerman.

KCBX insists it's doing everything it can to coexist with its neighbors.

“We respect our neighbors; we want to work with this community. We've been here for more than 20 years. We have over 40 jobs and families who depend on those jobs. We're going to follow the law and we're going to work hard to continue to earn the respect of our neighbors,” said Reint.

But Salazar says it’s a tall order to gain the respect of a community that has been the dumping ground for industry for decades.

“We would really like to see them out of here because this is not a pleasant community to live in as long as we have industries like this operating here,” said Salazar. “And everyone has a right to a decent, livable community.”

While the city and the EPA have both clamped down on KCBX, there is no indication that the company is planning on leaving the southeast side.

While KCBX has asked for variances that would allow for higher piles of petcoke and four years to enclose them, the city has not yet responded to the request.