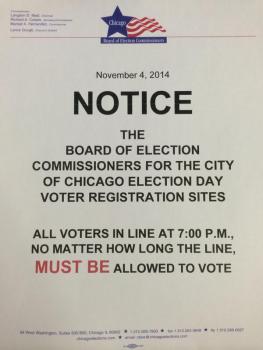 Chicago voters turned out in monumental numbers for same-day registration and voting today causing long lines at all five sites. The Chicago Elections Board reported that it had moved additional equipment and judges to those locations to help move lines along. Notices have also been posted indicating that all voters in line at 7:00 pm, MUST BE allowed to vote.

Despite the massive lines, voter turnout in Chicago is projected to be "nowhere near" the 53 percent turnout of the last governor's election, according to Chicago Board of Elections spokesman Jim Allen.

"It was a rocky start in a number of polling places where we had insufficient judges and/or equipment issues with electronic poll books taking too long to boot up," said Allen. "In most locations, the judges were on hand and able to start administering ballots."

Allen says that they are asking the court to extend voting hours by one hour at six locations for various reasons. The following precincts and wards affected are below:

View a map of the locations staying open until 8:00 pm.

"We will do a thorough examination. We are concerned about the robo-calls and the allegations that people were told they had another training session to attend or that they had to vote a certain way," said Allen.

In response to reports that some voters had to wait in line for more than two hours for same day registration and voting at the downtown precinct, Allen says “we’ve had grace period registration going on since October 8th. This is a program that’s for procrastinators who blew the standard registration deadline. We've seen this happen in a presidential election. It's a very time-consuming process."

Check out the top issues in Illinois that are being tweeted about today.