Thirty years after his first column for the Chicago Tribune, two-time Pulitzer Prize winning columnist Clarence Page reflects on race, politics, and social change in his new book Culture Worrier. Page joins us to discuss the book and the changes in America and the media that he has observed since first joining the Tribune in 1969.

Read an excerpt from Culture Worrier. 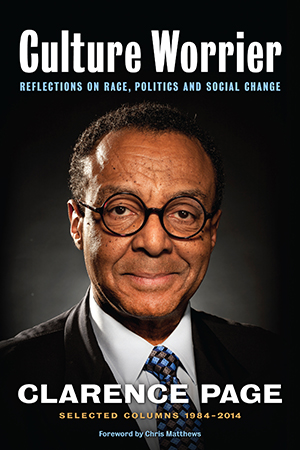 When the pioneer media guru Marshall McLuhan visited my university during my student days, he said something that has stuck with me. A student asked what he thought of the “black power” movement that was simmering at the time. “White America is detribalizing,” he observed in his characteristically prophetic fashion, “and black America is re-tribalizing.”

He said more, but the elegant imagery and symmetry of that statement has stayed on my mind ever since. McLuhan used the term “tribe” a lot. He spoke and wrote about “tribal man” versus “technological man,” for whom modern media are extensions of the self. In these and in other ways, he was far more often quoted than understood. But what he was saying made clear sense to me. It was the civil rights era. White America was relaxing its historic customs, institutions and traditions of white privilege. Black America, particularly my young generation—presenting cool but feeling very cautious—was turning inward, rejecting the melting-pot assimilationist values of our elders and reaching back to discover our roots in a place to which we never had been, a romanticized Eden called “Africa”—or in some super-righteous circles, “Afrika.”

Fast forward. Were McLuhan around today in the new media age of Twitter, Facebook, Google, Instagram and the cloud—and once he got through with his I-told-you-so’s—I believe he would observe something quite the opposite of what he said about racial tribes in the 1960s. He might well observe that African-Americans in the age of Barack Obama have been detribalizing while white Americans in the age of tea party politics are re-tribalizing.

Or maybe he, like the world, would be more complicated than that. In McLuhanesque terms, I have seen all Americans re-tribalize—as in, rearrange ourselves less strictly along lines of race or ethnicity than along lines of shared culture, values, interests and attitudes. Today’s tribes are less distinctly racial and ethnic than cultural and political. Such is the new neotribalism that has defined my career as a reporter and my past three decades as a columnist, from which the works in this book were selected. I’ve written a lot about race and ethnicity, but race only has been the most obvious marker of far more significant cultural and tribal relations in our society. Ambrose Bierce got the point with his dour Industrial Age definition of “the Conservative” as “a statesman who is enamored of existing evils, as distinguished from the Liberal, who wishes to replace them with others.”

It is with a similarly fascinated evenhandedness that I have tried as a columnist to track and navigate the vast, tricky terrains of our nation’s diverse tribal homelands. Reporting on the streets of Chicago taught me that African-Americans are just one of many ethnic tribes in our American quilt and, on closer examination, hardly a single tribe at that. Chicago taught me a lot about diversity. Southern Ohio, where I grew up and learned journalism, taught me about life in the so-called heartland. Thanks to both aspects of my background, I feel comfortable whether I am covering Al Sharpton or Sarah Palin, Reagan Democrats or Ralph Nader “raiders,” Pat Robertson or the Rev. Jeremiah Wright, the MTV generation or the “Greatest Generation,” millennials or centenarians.

But I am most thankful to have come up in the world of newspapers before mass media lost their mission to at least try to offer all things to all people. Reaching for a broad audience conditions you to be broadminded. In the age of target marketing, I struggle against the narrow confines of narrowcasting. Don’t fence me in.

McLuhan, who died in 1980 at age 69, had an idea of what was ahead. “The tribalizing power of the new electronic media, the way in which they return us to the unified fields of the old oral cultures, to tribal cohesion and pre-individualist patterns of thought, is little understood,” he wrote. “Tribalism is the sense of the deep bond of family, the closed society as the norm of community.” Had he stuck around long enough to have seen increasingly vast and diverse new political media and vast audiences tuning in not only to their own favorite opinion but also their own favorite version of facts, I suspect he once again would have said, “I told you so.”