Neuroscientist Daniel Levitin joins us to discuss his new book "The Organized Mind." Levitin argues that while evolution did not equip our brains to handle today's multimedia world, if we understand how the brain works we can develop strategies that will make us more efficient.

Read an excerpt below: 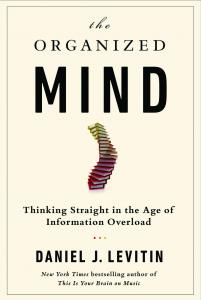 We humans have a long history of pursuing neural enhancement—ways to improve the brains that evolution gave us. We train them to become more dependable and efficient allies in helping us to achieve our goals. Law schools, business schools, and medical schools, music conservatories and athletic programs, all strive to harness the latent power of the human brain to deliver ever higher levels of achievement, to provide an edge in a world that is increasingly competitive. Through the sheer force of human ingenuity, we have devised systems to free our brains of clutter, to help us keep track of details that we can’t trust ourselves to remember. All of these and other innovations are designed either to improve the brain we have, or to off-load some of its functions to external sources.

One of the biggest advances in neural enhancement occurred only 5,000 years ago, when humans discovered a game-changing way to increase the capacity of the brain’s memory and indexing system. The invention of written language has long been celebrated as a breakthrough, but relatively little has been made of what exactly were the first things humans wrote— simple recipes, sales receipts, and business inventories mostly. It was around 3000 BCE that our ancestors began to trade nomadic lifestyles for urban ones, setting up increasingly large cities and centers of commerce. The increased trade in these cities put a strain on individual merchants’ memories and so early writing became an important component of recording business transactions. Poetry, histories, war tactics, and instructions for building complex construction projects came later.

Prior to the invention of writing, our ancestors had to rely on memory, sketches, or music to encode and preserve important information. Memory is fallible, of course, but not because of storage limitations so much as retrieval limitations. Some neuroscientists believe that nearly every conscious experience is stored somewhere in your brain; the hard part is finding it and pulling it out again. Sometimes the information that comes out is incomplete, distorted, or misleading. Vivid stories that address a very limited and unlikely set of circumstances often pop to mind and overwhelm statistical information based on a large number of observations that would be far more accurate in helping us to make sound decisions about medical treatments, investments, or the trustworthiness of people in our social world. This fondness for stories is just one of many artifacts, side effects of the way our brains work.

Excerpted from The Organized Mind by Daniel Levitin. Reprinted with permission of publisher.