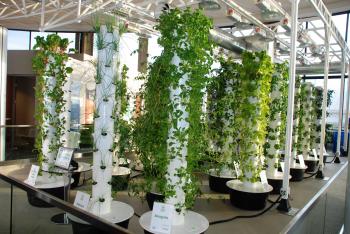 The future of farming is indoors and vertical, according to Jolanta Hardej who founded the company called FarmedHere. She says it's more efficient than outdoor, horizontal farming because the farmer can control the environment and utilize a lot more space.

Her giant food production facility is located in a warehouse near Midway in suburban Bedford Park. She calls her company the nation's largest vertical farm.

“We started out growing basil as well as leafy greens, like arugula, kale, and now we're doing R&D on tomatoes, peppers, strawberries...essentially, you can grow a lot of different things.”

And Hardej says the Chicago area is the perfect environment for a boom in vertical farming.

“There's a huge food revolution in Chicago. People want to know what they eat; people want to eat locally. They buy in farmers markets. We have phenomenal stores. Whole Foods and Mariano's - they pay attention to food that's sourced locally.” 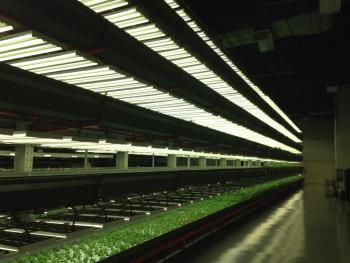 He says a changing climate is leading to more uncertainty for traditional farmers, so they are increasingly taking their production inside. And he says that means food can be grown year-round, even during Chicago's harsh winters.

“We live in a climate that only supports growth a few months out of the year,” Davis says. “Indoors, the weather is immaterial so you can grow food year-round and have production year-round. Therefore, people can buy fresh food year-round.”

Many architects and some IIT students have dreamed up an urban landscape with high-rise vertical farms, but Davis says that's not financially feasible quite yet.

A vertical farm is the perfect reuse of a lot of empty industrial or warehouse buildings, according to Hardej.

“This was just [a] warehouse sitting here doing nothing. All of a sudden, we're creating jobs, paying taxes and putting the building to work,” she said.

Most vertical farms employ a soilless method of farming, where plant roots grow in nutrient-rich water. That means they can grow free of the insects or diseases that sometimes foment in soil. 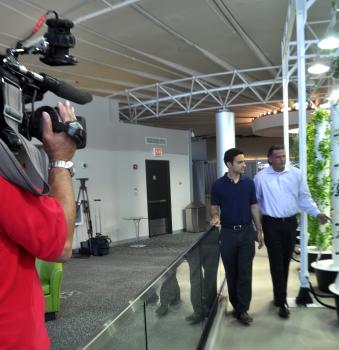 “Our greens are grown without any chemicals, without any pesticides or herbicides. So you can eat them right out of the box. They consist of much more nutrients than any other plants,” Hardej said.

FarmedHere uses a growing method called aquaponics. It combines fish and plant farming into one interdependent system. Water with broken down fish waste is pumped over to fertilize the plants. The plants clean the water and send it back into the fish tanks. That means an aquaponic farm reuses nearly all of its water.

In the Back of the Yards neighborhood, a non-profit cooperative called The Plant houses aquaponic indoor farms on several floors of the building, and personifies Chicago's transition from hog butcher to potential vegetable grower of the world.

He says he plans to power his farm with a $3 million piece of machinery that creates energy from burning food waste.

“Mostly we'll use leftover scraps from grocery stores, some excess fat from the fat burning plant next door, and even some of the waste produced at the plant,” Edel said.

When it’s finished, he says it will provide enough energy to heat and cool the entire building, with enough left over to sell back to the power grid. He says the heavy overhead costs are not the only challenge faced by vertical farmers. The city has been slow to catch on to what they do. 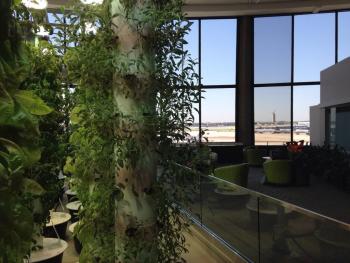 “Establishing what an indoor farm is, how it should be regulated, licensed, and how it is different from an outdoor farm, that's the biggest challenge,” he said.

But the city has encouraged farming in a building millions of people pass through every year. O'Hare Airport may no longer be the world's busiest airport, but city officials say it is the only one with an indoor farm. And it seems fitting that, at a place that's all about aerodynamics, the method of farming is called aeroponics, where vegetables are planted in vertical towers.

“Every half hour, a pump turns on to shoot water to the top of the tower and it trickles down,” said Brad Maher, who runs the farm for O’Hare concessionaire HMSHost. “The plants' roots are in the tower.”

And he says the food is used at O’Hare’s various restaurants.

“We have Swiss chard, habanero peppers, edible flowers, chives, cherry tomatoes, different types of lettuce as well. It's a great. Setting up here, it's a peaceful getaway from the hustle and bustle of the airport.”

Maher says it takes about four to six weeks to grow vegetables at O'Hare's garden.

Hardej says it often takes longer than that to grow greens outside. Inside, she says she can harvest greens, like kale in 10 days. The quick cycle and a lack of heavy distribution costs keep her prices down in the face of expensive overhead, she said.

“That's the whole concept of growing local,” she said. “We harvest one day, deliver the next day.”

As utopian as vertical farming sounds, however, Davis admits you can't grow everything inside.

“There are a lot of cheap commodities, like potatoes and onions where it'd be difficult to figure out a way to grow indoors. Let the people in Kansas grow the wheat, and let the people in Idaho grow the potatoes. On the other hand, if you're looking for the freshest produce in the city, grow that next to the restaurant or down the street.”