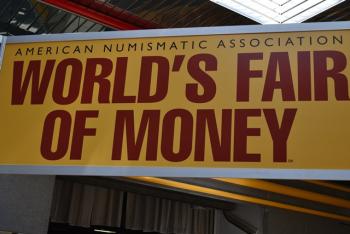 It's the season for county and state fairs but if you're not into livestock shows, pie bake-offs and political grandstanding, you may want to visit a different kind of fair taking place in Rosemont. There's no fried dough, but rather lots and lots of dough, as in money -- both very old and brand new, and from all around the world. It's the World's Fair of Money, and we went to check out just how much money was involved.

Money as far as the eye can see: an alleged $1 billion worth of currency. But it's not a bank or a huge ATM. Hall A of the Donald E. Stephens Convention Center in Rosemont has been taken over by numismatists of every level, and this is heaven for those connoisseurs of currency.

Take, for example, the kiosk of the U.S. Mint where a long line of collectors formed to snap up a newly minted gold coin commemorating the 100th anniversary of the buffalo nickel.

“The demand is unbelievable. It's a beautiful coin, one of the most beautiful coins, I think, personally, the U.S. mint's ever put out,” said Wayne Maynard, a numismatist from Dallas, Texas.

The face value of the sold gold coin is relatively low, but its sale price is not.

By contrast, Fort Lauderdale dealer John Markis has some money with an almost unbelievable face value that you can get for cheap.

“I have a one hundred trillion dollar bill,” he said. “It is the largest denomination printed in the world. In 2008, inflation was run away in Zimbabwe, and this bill was printed to keep up with the inflationary times of that day.” 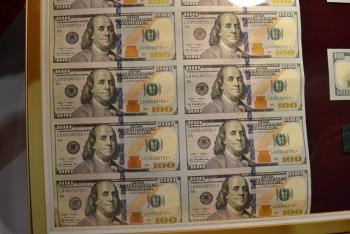 You can become a Zimbabwean trillionaire for just $50. And if you wait another month or so, you can pay for it with the newly redesigned $100 bill. The U.S. Bureau of Engraving and Printing is giving a sneak preview of the new note that hits banks in October. To make sure he's not illegally duplicated, Ben Franklin will now be green and blue.

“The Treasury Department, Federal Reserve, Secret Service and the Bureau of Engraving and Printing are working to redesign currency to stay ahead of counterfeiting,” said Kevin Brown. “To the right of the portrait, you'll see a blue 3-D security ribbon that's woven into the paper, and that particular security feature, if you tilt the note from side to side, there's images of the Liberty Bell and the 100 that will move.”

Near the new $100 is the old $100,000 bill issued in the early 1930s, at the height of the Depression no less. It was only ever meant for banks to use amongst themselves.

For the non-collector, there's plenty to see and do. You can learn how money was printed during the Lincoln administration on a 150-year-old printing press. As one might imagine, the process was labor-intensive and time-consuming.

It began with a metal plate on which an artist hand-engraved an image. Ink was then rolled onto the plate to fill in the lines, but then much of the ink had to be removed so you wouldn't end up with a Rorschach test.

To make sure only the engraving was printed, you dusted your hand with some sort of powder and spread it on the plate, which was then taken to the press where wet paper was waiting. The paper had to be wet to fully absorb the ink. The two were carefully aligned, then put into the press, and after a few turns of the massive wheel, everything emerged on the other end. The result was both legal tender and a magnificent work of art. 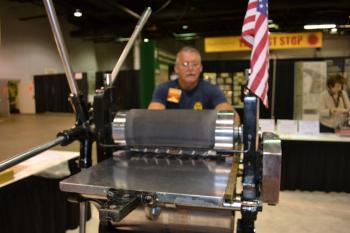 Discerning collectors know that Stack’s Bowers is one of the elite numismatic houses in the world. Elite, meaning rare and pricey items, such as this U.S. silver dollar.

“This is the first silver dollar issue of the United States. This is the first coin in basically a complete set of silver dollars that goes from 1794 to 1803 with all the minor variations that one collector put together,” said Vicken Yegparian, vice president of Stack’s Bowers. “This one is worth many hundreds of thousands of dollars.”

But that's chump change compared to what a nearly identical coin, considered to be the finest specimen of a 1792 silver dollar, brought at auction earlier this year. A collector paid over $10 million for it.

And then there's an exceedingly rare half disme, or 5-cent piece, authorized by President George Washington in 1792. It's up for auction in Rosemont tonight.

“This, we expect to sell at auction in excess of $1 million,” said Yegparian.

True to its name, the World's Fair of Money is a global event with currencies from around the world. Australia, for one, is trying to get collectors to buy their globed and very colorful $5 coin. It is legal tender down under, but how the cup shaped coin works in vending machines is anyone's guess.

For those wondering where to start as a numismatist, there are various clubs at the fair ready to give you advice. The bottom line is that collecting currency can take any form you want.

“My husband and I have collected a birth year set; one coin of every denomination of every country in the world the year we were born,” said Fran Lockwood, member of Central States Numismatic Society.

Or you can start by checking under the sofa cushions or finally breaking open the piggy bank.

The World's Fair of Money runs through this Saturday at the Donald E. Stephens Convention Center in Rosemont.

View a slideshow of some of the other curious and rare currency being exhibited -- and sold -- at the fair.

Photos and captions by Crystin Immel.