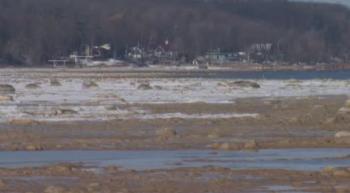 Lake Michigan water levels are now at historic lows. In Grand Traverse Bay in northern Michigan, docks jut out over dry land. Rocks and boulders, long under water, sit on the dry lake bed. In Chicago, docks in Monroe Harbor sit high above the lake. The water has dropped over two feet below average levels and six feet from the all-time high. Even more critical, there have been days this winter when the water in Lake Michigan has been lower than the water in the Chicago River.

“The concern is with the river being higher than the lake, and the water moving out through the lock,” said Roy Deda from the U.S. Army Corps of Engineers.

The Chicago River has flowed away from Lake Michigan for over a century. Engineers performed what was dubbed an “engineering miracle” by reversing the river to prevent sewage from flowing into the lake and threatening the city’s drinking water supply.

“Water flows downhill. What we have now is a situation where the water in the Chicago River depends on the lake being higher, so the lake goes into the river, and takes it down to the Gulf of Mexico,” said Henderson. “If the lake goes below the river, then the river will go downhill, i.e., into Lake Michigan.”

On the day we shot this story, there was less than a quarter of an inch difference between the water level in the river and in the lake. 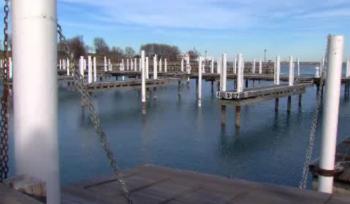 And when the Chicago locks were opened, the surface water was clearly flowing out towards the lake. But does that mean the river has reversed?

“Absolutely not. We have control structures that are closed off. The only way water gets through it all is that small quantity when the locks are open on that side, but then they’re immediately closed off. So there isn’t a river flowing at any time into Lake Michigan,” said David St. Pierre, Executive Director of the Metropolitan Water Reclamation District of Greater Chicago.

But the district has been concerned enough about river water getting into the lake that it has asked the Army Corps of Engineers to control the flow with the locks.

“We did have some days where the river levels were higher than the lake, and we did modify our lock operations during that time frame, to deal with that,” said Deda. “We still locked vessels, but we did not lock as often.”

The river may not reverse, but without water flowing in from Lake Michigan, there is a problem.

“Currently, we use gravity to bring water in. So if we don’t have that differential on the lake side, then we’re going to have to figure another way to keep that fresh,” St. Pierre said. “That’s a dead-end river. In hot weather, you’re going to lose oxygen in the water. Oxygen in water is needed for life in the water to thrive. If the oxygen is depleted, that life can’t live; and if things die in water, then you have a problem.” 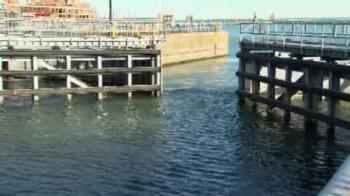 But Henderson says there's trouble whenever any river water gets into the lake.

“It’s 70 percent sewage. A large part of it is untreated. A lot of human sewage is in that, and what would be happening is the Great Lakes would start to be filling up with human sewage from the Chicago region. That’s a problem,” said Henderson.

“It is not contaminated, dirty water. We like to think that we are the clean water industry. We take dirty water and we make clean water, and that’s what we’re discharging into the local area waterways,” St. Pierre said.

Seventy percent of the river is effluent: wastewater that has gone through two stages of treatment at the district’s treatment plants. And, after lawsuits from the U.S. Environmental Protection Agency (EPA), the NRDC and other environmental groups, the district will go to a third level of treatment and begin disinfecting its effluent in 2016. But even then, both Henderson and St. Pierre agree, the river water would not be clean enough to flow back in to the lake. 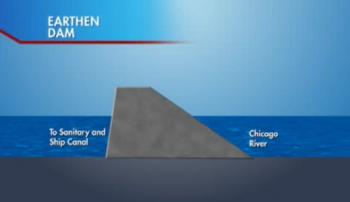 “Well, this is a very, very large system. You can’t simply divert water into it and transform it,” said Henderson. “What we need to do is start expediting the studies that need to be done to change our sewage system, to change how the river works, so that it’s consistent with the violent changes we’re seeing, in terms of the ferocity of storms, and the grip of drought that we have within this region,” said Henderson. “It can’t be done overnight. It needs to be started overnight in order to get where we need to be.”

There are proposals now that would completely reengineer the area's river and waste treatment system. Some include closing the connection between the Great Lakes Basin and the Mississippi River Basin, and allowing a portion of the river to flow back into Lake Michigan. The lake’s dropping water levels add a new urgency to those proposals.