How the Shedd Aquarium is Teaching Aquatic Inhabitants to Follow Directions 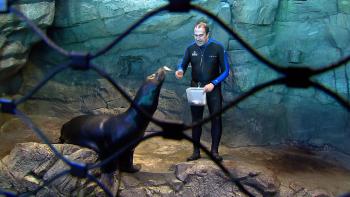 Sit, roll over, fetch. Those are commands you may be familiar with when it comes to training the family pet. But trainers at the Shedd Aquarium have been using targeted training techniques with more unusual animals for years. And, it’s for more than just tricks.

A California sea lion named Tyler that lives at the Shedd Aquarium gave me a flipper shake; just a sampling of a few of the amazing things Tyler has been taught to do through the Shedd’s pioneering training program.

“It’s also a great way for us to simply allow the public to see him, so we do some things that are fun, like, can you wave hello to everybody? Good!” said Ken Ramirez, Executive Vice President of Animal Care and Training at the Shedd Aquarium. “The easy part is that the rules of training are the same, whether you’re working with an earthworm or a Harvard graduate, we all learn the same way. But the challenge is, every species is different, and consequently, you have to know the biology. You have to know the natural history. You have to know what motivates an animal.”

Generally speaking, trainers say the best motivator for these exotic animals is food.

Guinness, a 20-year-old Alligator Snapping Turtle needs all the help he can get to keep his shapely hundred-pound figure. So, trainers used targeted training and positive reinforcement to begin the process of conditioning Guinness to respond to their directives.

“So the very first thing that we trained him to do was to learn what a target pole meant.  We taught him that every time he touched the target pole, he got a piece of food. Once he learned that game, we were able to teach him to follow a target and follow it all around his habitat,” said Kelly Schaaf, Manager of Animal Care and Training.

Schaaf says Guinness primarily responds to visual cues because little is known about the hearing of these turtles. 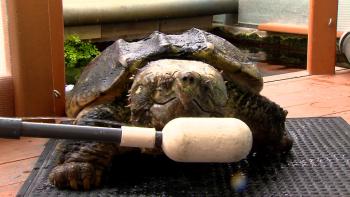 But, in the wild shark collection, senior aquarist and trainer Heather Thomas uses a combination of audible cues and visual signs to indicate when it’s time for these sharks to arrive for dinner.

“We try to have different sounds, like we have clickers, we have triangles, we have wooden sticks that we band together. So, we try to have a pretty big variety of noises so they sound different to them, so it’s easy for them to differentiate,” said Thomas.

Because there are so many different species of underwater inhabitants in the tank, Thomas says it’s important to have different signs to visually cue each species when it’s their turn to feed.

It also ensures that dominant species don’t get overfed while the more docile fish get hungry. 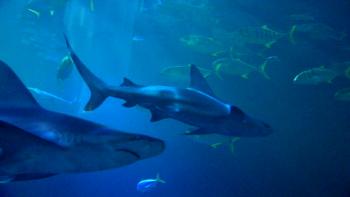 The training is obviously important in helping to teach these animals how to feed in a zoological environment, but trainers say it also conditions them in a way that is critical for their long-term health care.

Ramirez says at its most basic level training is useful for simple things like teaching an animal to move from one enclosure to another, or to be fed by hand.

“The target is just a focus, and by focusing on the target, they learn that it’s something that’s going to earn them some kind of a treat,” he said.

Sometimes those treats can be used to hide vitamins or medications to supplement a diet or when an animal becomes ill.

“But, even more importantly, by gaining an animal’s trust, you can do things like teach them to give you their tail so that you can take a blood sample, roll over for an ultrasound exam, open their mouths so you can brush their teeth; things that you wouldn’t be able to do with an exotic animal,” Ramirez said. “But with that relationship, it allows you to do things that help us take care of them better.”

As trust grows between animal and trainer, the animal becomes more comfortable being cared for, and it becomes easier for them to live in captivity.

“I think the most important thing about training here at Shedd is that it is a critical part of good animal care,” said Ramirez. “It’s not about doing cute tricks. It’s really about providing a more enhancing life for them; being able to provide them the ability to help us with their own care. And that’s why training is such a valuable component to what we do every day here at the aquarium.”