The End of Legislative Scholarships

Today, Quinn signed a new law that gets rid of the legislative scholarship program in Illinois. The tuition waiver program was plagued by abuse, and Quinn abolished the program as one of his ethics reform goals. 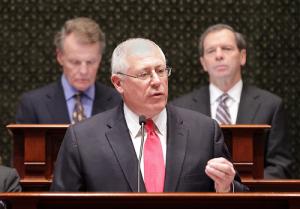 “There is no place for political scholarships in Illinois,” Quinn said. “I believe in the power of education, the importance of ethics and integrity, and the idea that you can get ahead in life with a little hard work. That’s why today I enact this long-overdue reform and redouble our efforts to increase scholarships for deserving college students.”

The House Bill is also sponsored by Representative Fred Crespo (D-Hoffman Estates) and Senate President John Cullerton (D-Chicago.) Members of the General Assembly will no longer be able to award higher education scholarships after September 1, 2012. Recipients that have already been nominated for the 2012-2013 school year will still be awarded their scholarship.

The General Assembly Scholarship program allowed legislators to annually award eligible persons from their district with scholarships waiving tuition fees at state universities. Legislators were found to have abused the program, awarding scholarships to relatives, political insiders and to people living outside their district. During the 2010-2011 school year, the program cost 11 of 12 public state universities a combined $13.4 million in waived tuition fees.

“While legislative scholarships help a small number of students, the program’s abuse comes at an incredibly high cost in terms of trust in government and absorbed tuition at colleges and universities," said Lt. Governor Sheila Simon.

The bill also creates a task force that will review all tuition and fee waivers offered by state universities, and will report its findings on or before April 15, 2013.

“It is unfortunate that the legislative scholarship program was misused by legislators, taking away what for some students was their only way of attending college,” said Cullerton. “This new law will allow us to take a comprehensive look at all tuition waivers and how we can make higher education more accessible for those who need the most help.”

The new law is supported by the Better Government Association and is effective immediately.

Listen to an audio clip about reforming the program below.