Metals such as copper and aluminum bring in high prices in today's market, which is good for people in the recycling business. But residents on Chicago's West Side claim that recyclers there are profiting at the expense of the neighborhood.

The material comes in on trucks, rolled in on shopping carts and city garbage cans, or just hand-carried through the gates of Gomez Recycling in the 4700 block of West Chicago Avenue. Gomez recyclers got their recycling license in February 2011. Neighbors and business owners in the area claim that much of the material being brought in has been stolen from the neighborhood. And area crime statistics show that robbery complaints have jumped by 52 percent from June of last year.

“This is a crime haven,” said neighborhood resident Nicole Harvey. “Most of the things that they accept in here, I believe, truly are stolen.”

As we were shooting this story, two men carried in an auto transmission that was still dripping oil. Neighborhood activist Rev. Edwin Perry watched as a truck with an air-conditioning unit waited to get through the gate.

“We're trying to make sure that we can slow down or stop this ravaging of material from homes and businesses,” said Perry. “There was a church not too far from me, they cut the service from the street, tore all the copper wiring out Sunday morning when they came to church. They couldn't turn the lights on our anything. It's 90 degrees out and you're baking inside the church in the dark because you don't have any electricity.”

Advance Equipment company sits just across the street from Gomez Recycling. The family-owned business has been at the West Chicago Avenue location for 90 years. Owner John Wedekind says crime has shot up since Gomez moved in.

“We work six days a week, and we came in Saturday morning to start up production, and I opened the door and came across, and all our power was cut off from the building and taken away,” said Wedekind. “They took the aluminum boxes and all the wiring for scrap. It’s all copper and aluminum. That’s expensive for scrap. It cost us around $5,000 for an electrician to come out and replace it, and they stole it. For scrap, they probably got about $100 for it, what they took.”

“You got people scouring up telephone poles, ripping out copper. You got people taking away electrical conduits so that their businesses are shut down for two or three days, and you willingly accept it," she said to Gomez.

But Gomez claims that he does not accept any stolen goods, and says he keeps all records required by the city for recyclers.

"No. I got IDs for everything from my customers," Gomez said.

He says he does not buy or accept anything from customers without an ID.

The Department of Public Health regulates recyclers. Its records show that Gomez Recycling is operating under a valid license and has passed all recent inspections. A company renting space from Gomez, S Transmissions, was given a cease and desist order on June 7 for operating without a license, and is shut down.

“It’s a new crime wave. We got to tighten up the regulation for recycling since it’s a new way of creating opportunities as they call them,” said Mitts. “And I know recycling is good for the environment, but not this type of recycling. Not this type.”

“They need to be shut down, closed, run out,” said Mitts. “We don’t need them. We don’t need business like that, we can do better without it. We want good business.”

Ald. Mitts and Ald. James Balcer (11th) have drafted an ordinance to tighten up regulations for recyclers. The ordinance would prohibit recyclers from accepting material delivered in a city-owned garbage can or retail store shopping carts, among other things.

Balcer hopes to have the ordinance introduced into the full City Council in July. 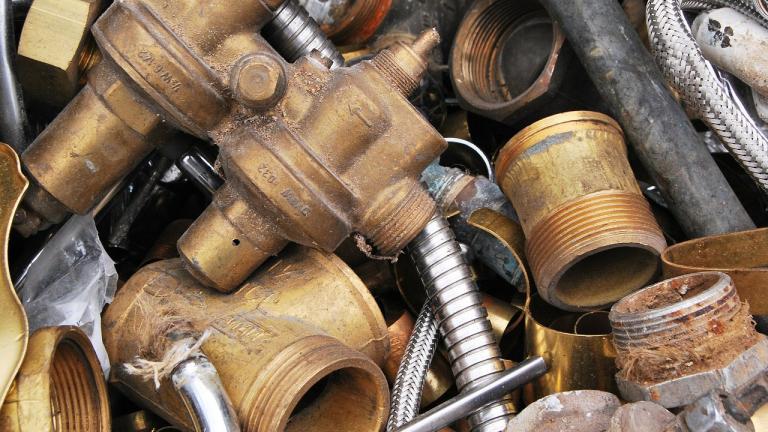