It is one of the most abundant elements in the world, and of course, critical to human life. It has historically been used to treat deep sea divers who got the bends. But now, more medical care facilities are using it to treat everyone, from cancer patients to diabetics. And many professional football players have turned to the treatment for their injuries.

Some Chicago area doctors think the key to a speedy recovery might be as simple as the air we breathe, while others aren't quite holding their breath. 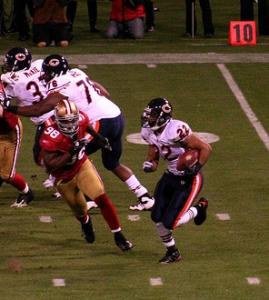 On December 6, Chicago Bears fans feared the worst. Star running back, Matt Forte, suffered what looked to be a devastating knee injury. But the prognosis was that he could be back on the field before season’s end. He reportedly sought out vast quantities of a certain substance in hopes of expediting his recovery: oxygen.

To treat wounds and injuries, professional football players have increasingly turned to hyperbaric oxygen tanks, like the ones at Gottlieb. A small percentage of other area hospitals use the expensive therapy for a range of patients.

“Hyperbaric treatment is a treatment where pressurized oxygen is piped into a closed system, whereby the effects of the treatment are positive depending on what illness they have,” said Dr. Viglione.

Carmen Colao has a form of brain cancer. He undergoes two hours of hyperbaric oxygen therapy every day, to offset the effects of radiation treatment.

“If I had a headache, it shrinks the headache down,” said Colao. “If I had some kind of pain, it shrinks it down. It makes you tired, but I think it’s working good.”

But, the vast majority of patients at Gottlieb are diabetics who suffer from leg and foot wounds that could lead to the amputation of a limb.

Shirley Krueger says that if the sore on her foot doesn't heal, she could lose her foot.

“They have me down for 40 treatments. The wound is getting smaller,” said Krueger.

Dr. Viglione calls the tomb-like chamber that the patient enters a “dive.” That's because the environment inside is pressurized to the equivalent of being 33 to 45 feet below sea level.

It is only under the increased pressure that oxygen -- when piped into the tube -- infiltrates the plasma of the blood. The highly oxygenated blood is thought to be the key to speeding the healing process. 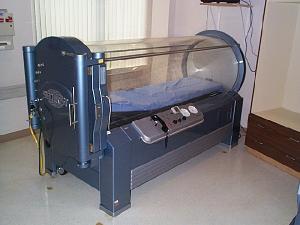 Gottlieb is one of a handful of area hospitals that use hyperbaric oxygen treatment. Most are smaller, community hospitals, like Swedish Covenant on the North Side and Loretto on the West Side.

Major research hospitals, like Rush and Northwestern, do not provide the therapy.

The University of Chicago Medical Center experimented with it. Dr. Lawrence Gottlieb is the head of wound care at the U of C. He found that any positive results were due to the placebo effect, not the oxygen.

“If you go with good, standardized care, most people can get these wounds healed without it. Does it speed up the process? It’s really hard to prove that,” Dr. Gottlieb said.

Gottlieb says the benefits are not widely agreed upon in the medical community, although the risks are thought to be minimal.

I decided to take a “dive” myself. You initially feel a warming sensation. You can also feel your ears pop with the increase in pressure. And, if you're claustrophobic, of course, you may get a little anxiety, which is where the entertainment comes in.

The treatment is passive for most patients, involving a few hours of TV watching -- because there really is nothing else to do in a pressurized oxygen chamber.

The U of C’s Dr. Gottlieb believes the treatment makes more business sense for the hospital, especially once it’s invested in the equipment, than therapeutic sense for the patient.

But Dr. Viglione says it has become an essential component to treating his patients' diabetic wounds.

“There are varying opinions on the fact as to whether hyperbaric does make a difference,” Dr. Viglione said. “We, here at Gottlieb, have seen the effects and gone ahead and saved multiple limbs with the oxygen therapy.”

The tanks cost $250,000 each. Dr. Viglione says the treatment is covered for certain diseases, like diabetes, by most insurance, including Medicare and Medicaid.

Though Matt Forte reportedly used the treatment, he did not play again during the season. Although that may have been because there was little to play for by season's end.

Do you believe oxygen can help heal wounds and injuries? Post your comments below or sound off on our discussion board!

For more on hyperbaric chambers and to see a list of Illinois locations, please visit the links below.