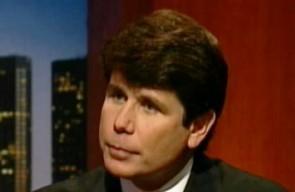 The sentencing hearing of former Illinois governor Rod Blagojevich began on Tuesday. Elizabeth Brackett was in court and has the details on Chicago Tonight at 7:00 pm.

So what can we expect from the hearing? Chicago Tonight spoke with Steven Miller, former Chief, Special Prosecutions Division of the U.S. Attorneys Office in Chicago. One of his responsibilities was heading the public corruption program of the U.S. Attorneys Office. Miller is currently a partner at Reed Smith, LLP. Check out what he thinks will happen during the hearing in the Q&A below.

What can we expect from the Blagojevich sentencing hearing?

"Both sides will present their respective positions on the Sentencing Guidelines and the factors under 18 USC 3553. The 3553 factors govern imposition of sentence. Among other factors, the judge is required to consider the nature and circumstances of the offense, the history and characteristics of the defendant, the seriousness of the offense and the need to promote respect for the law. The judge has virtually unfettered discretion in weighing these factors after considering the Sentencing Guidelines, which are merely advisory."

The Feds have recommended 15-20 years in prison for the former governor. What are your thoughts about this length of time for his prison sentence? And will Tony Rezko’s recent sentence of 10 years have an impact?

"Yes. The Rezko sentence likely established the floor for Blagojevich because he, as the Governor, was higher up in the food chain of criminal culpability. I don't expect Wednesday, which is when sentence is imposed, to be the best day of the former governor's life."

"Highly negatively. It is appropriate to fight aggressively within the courtroom - that is expected and respected.  But showing a multi-year contempt for the judicial process is a highly dangerous strategy. If you don't win the courtroom battle after behaving that way, watch out for the payback."

Will the judge consider the fact that Blagojevich has two young daughters when sentencing him?

"A minimal consideration, if any. If parenthood conferred immunity from punishment, no one would ever go to prison. This doesn't work for so called street criminals. Why should it work for corrupt politicians?"

Will the fact that Blagojevich didn’t receive any monetary gain for his actions affect the length of his prison sentence?

"Unlikely. The law punishes actual and intended loss. The only reason why Blagojevich didn't “pocket” the money is two-fold. First, much of what he was seeking was campaign contributions, which would not directly be his. As importantly, the FBI and U.S. Attorneys Office were carrying out their investigation as the crimes were unfolding. They stepped in before certain of the schemes (e.g. the Senate seat sale) could be finalized. It was not for lack of effort by Blagojevich that he didn't realize the fruits of his illicit behavior. "

"Probably adversely. If a 6 ½-year sentence did not deter Blagojevich, there is a good chance that Judge Zagel will decide that the price must be raised for corrupt politicians to see if that stops them in the future."

Blagojevich is expected to address Judge Zagel in court on Tuesday. Can he say anything to the judge to help his case at this point?

"Too little, too late. He has typecast himself as the John Gotti of crooked politicians."

What do you think is a fair sentence for Blagojevich? Post your comments below or sound off on our discussion board!