Framework for Gaming in Illinois 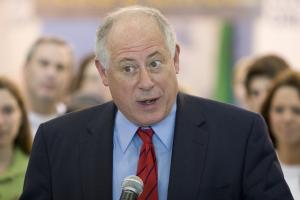 Gov. Pat Quinn says he will veto a gaming bill passed in May, in favor of a gambling plan of his own. Carol Marin talks with the governor about that and other pressing Illinois issues on Chicago Tonight at 7:00 pm.

Quinn released the following statement on Monday, regarding Senate Bill 744.

“Over the past several months, my administration has conducted a thorough review of Senate Bill 744. After decades of fiscal mismanagement and ethical problems, a quick fix with significant and long-lasting consequences for our state is not the answer. My office has spent months examining the proposed bill’s potential economic, ethical, revenue and regulatory impacts. We studied the effects of gaming here and in other states. And I have met – at length – with both the bill’s supporters and opponents.

“Following this comprehensive review, I have determined this bill falls well short of the best interest of the people of Illinois. I will not sign SB 744 as it is currently proposed.

“To promote and protect the interests of the people of Illinois, I can only support a smaller, more moderate expansion that prevents corruption and provides adequate revenue for education.

“Illinois cannot expand gambling at all without ensuring proper oversight and full integrity. The Illinois Gaming Board must be equipped with ultimate oversight authority and the necessary tools to continue its exemplary record of keeping corruption out of our gaming industry.

“To prevent conflicts of interest, I also ask the legislature to take the additional step of banning campaign contributions to elected officials by gaming licensees and casino managers, as lawmakers in other states have done. If we allow any gambling expansion in Illinois, we should do so in good conscience, without the excessive influence of those that may benefit from such an expansion.

“Second, as I have said repeatedly, I believe the current bill is top-heavy with too many new gambling locations. I will only support a smaller, more balanced and modest expansion. As long as I’m Governor, Illinois will not become the Las Vegas of the Midwest.

“The attached framework represents a way forward on this issue, and I look forward to working with members of the General Assembly.”

Watch today's complete press conference with Gov. Quinn about gaming in Illinois in the video below.

Do you think gambling in Illinois should be expanded? If so, how? Post your comments below or sound off on our discussion board!

For more on Gov. Quinn’s Framework for Gaming in Illinois, visit the PDFs, audio attachment and links below.