Laura Caldwell is a former civil trial attorney, and published author of several novels and one nonfiction book. While researching her sixth novel, Caldwell was led to the criminal case of Jovan Mosley, a young man charged with murder, sitting in a Cook County holding cell for nearly six years with no trial date. After hearing about his case, Caldwell joined a renowned criminal defense attorney to defend him, ultimately proving his innocence and inspiring her first nonfiction book, Long Way Home: A Young Man Lost in the System and the Two Women Who Found Him. Caldwell joins us on Chicago Tonight at 7:00 pm to discuss the book.

The following excerpt is the Prologue from Long Way Home.

Behind Courtroom 600, behind the majestic ceilings, the mahogany
woodwork, and the judge’s high pedestal desk, there is a cage. Also
called a “bullpen,” the cage is about twelve feet wide by twenty feet long.
Its cement floor has been painted so many times it’s now a jaundiced ivory
color. In the far corner is an exposed urinal. Along the left wall, a bench is
bolted to the floor. And sitting on that bench is Jovan Mosley.

When he sees me he looks startled. He stands. He tugs the bottom of
his gray suit jacket and adjusts his tie. He walks to the bars of the cage and
grasps them. He has light black skin, gentle brown eyes and long lashes.
He looks like a handsome young lawyer. He does not look like a kid awaiting
a verdict for first-degree murder.

It’s against the rules to touch prisoners in the bullpen, but I’m past caring.
I put my hands on his. They are big and soft because Jovan’s home for
almost six years—SuperMax, as the inmates call it—is a holding cell for
those awaiting trial where there is nothing to do but wait and try to stay
alive.

SuperMax is one of the toughest county jails in the state, possibly the
country. And yet, if Jovan gets a guilty verdict, he faces a future in a state
penitentiary. I look into his eyes, and I know that if the jury finds him
guilty, if he has to go to that state pen, we will lose him. Jovan, or at least
the Jovan I have come to know, will vanish if the legal system he believes in
so strongly does not come through for him.

The question he is referring to is one we received from the jury—Can
we convict him of something less than first-degree murder? The judge told
them they had all the information they needed, and they should keep
deliberating.

“Cathy says . . .” My voice drifts as I search for the rest of my answer.
This has been my mantra for months now.

Cathy is Catharine O’Daniel, Jovan’s lead attorney, and the person who
somehow pulled me into this case. Cathy also happens to be one of the
best criminal lawyers in the city. And since I’m a civil litigator—a former
civil litigator, really—with no criminal law experience, I defer to Cathy on
all things important. It turns out that during a murder trial, what’s important
is each and every thing.

“Cathy says we just have to wait and see.”

“What do you think about that question?” he asks.

His body sways for a second. His hands cling to the bars, and I squeeze
them tight. Shooting a glance down the hallway, I wonder if a deputy will
come if I call for help.

But then Jovan stands upright again, and I glance the other way, thinking
that down that hallway in a stuffy room are twelve people—the only
people who can help Jovan now.

I turn my eyes back to Jovan, then to the white paper plate on the bench
behind him. On the plate is a bologna sandwich—two pieces of brittle
wheat bread on either side of stale, pinkish bologna.

“You should eat something,” I say. I know Jovan has eaten little in the
ten days since his trial started.

He looks at the plate too and grimaces. We both know he won’t touch
it. He has eaten a bologna sandwich, the only lunch offered by SuperMax,
every single day for the last five years and nine months. Meanwhile, his
suit hangs loose on him, his shirt collar is too big, as if he is slowly disappearing.
When that jury comes back, we’ll find out if he’s about to disappear
for good.

I feel a surge of grief.

“Seriously, eat something.” I squeeze his hands again. “Cathy and I will
get lunch too, and we’ll be back.”

He nods. He takes his hands away. I hesitate.

When I turn to go a moment later, Jovan Mosley is sitting on the bench,
his arms on his knees, staring straight ahead at nothing.

In the courtroom, Cathy is finishing a discussion with one of the state’s
attorneys. Her blond hair is perfectly styled, and she’s wearing a red suit—
the perfect closing argument outfit. But when she turns to me, I see the
strain on her face. Her hazel eyes are exhausted.

I give her a helpless shrug. I can’t seem to find words.

“I swear,” she says, “if he gets tagged I’m giving up my goddamned
ticket.” She means her law license.

“Any more questions from the jury?” I ask.

Cathy shakes her head, looks on the verge of tears. “Jesus. I can’t just sit
here.”

She picks up her bag and slings it over her shoulder. “Let’s get some lunch.”

At a dumpy Mexican place a block away from the courthouse, Cathy
and I order food, which sits congealing on the table, and margaritas. I’m
not sure how it works in other legal systems, but in Chicago, in Cook
County, which happens to be the nation’s largest and busiest court system,
it’s standard protocol for attorneys to cocktail during jury deliberations.
The drinks had never been more welcome.

An hour or so later, after we’ve blown off steam and continued to ignore
the food, the cell phone, sitting in the center of the table, rings. We both
look at it for a moment. She answers and listens, then snaps the phone shut.

“There’s been yelling from the jury room. They’ve got another question.”

Cathy and I race back to the courthouse, chewing breath mints, trying
not to think of what might happen.

In the courtroom, Judge Michael Brown, a tall, stoic black man, reads
the question: Can we see the police records?

The judge informs the jury again that they have all the information
they need and tells them to keep deliberating.

Cathy and I huddle together.

“What does that question mean?” I ask.

A deputy enters the courtroom and hands the judge another note from
the jury.

The judge puts on his glasses, reads the note. He takes off the glasses
and lays them on his desk. He looks at the state’s attorneys, then at Cathy,
then at me. “We have a verdict.”

Cathy and I turn to each other, eyes big. “I think I’m going to be sick,”
she says.

“Should I get Jovan?”

This time, a deputy escorts me back to the cage.

His expression turns to terror. Sweat beads on his upper lip.

Back in the courtroom, it’s deadly silent. The three male state’s attorneys
stand at their counsel table, hands clasped behind their backs.

The deputy walks us to our table, and Cathy and I arrange Jovan so he
stands between us. I can feel him trembling.

He shakes his head and swallows. It seems a real possibility he might
pass out.

“Bring the jury in,” calls the judge from the bench.

Jovan takes an openmouthed intake of air, like someone just coming to
the surface after being underwater.

The jury files silently into the jury box. We study their faces, as if we can
divine, by only a twitch or a blink, which way they are going to go.

One of the jurors, Alfonzo Lewis, acknowledges Jovan with a glance
and a barely perceptible jut of his head, a movement entirely unreadable.
He takes his place by his jury seat and looks down. Cathy and I look at
each other: What was that?

We keep studying the jurors.

“Uh-oh,” I hear Cathy say under her breath.

And then I see what she sees. One of the jurors, Andrea Schultz, a suburban
brunette with short, styled hair and glasses, is holding the verdict
forms. Which means Andrea Schultz is the foreperson.

Andrea had been attentive and pleasant during the trial. But while
many of the jurors had cried throughout closing arguments, Andrea had
been near sobbing, something that threw the attorneys on both sides of the
case. Was she weeping for Howard Thomas, the victim, and the horrible
loss his family had suffered? Was she crying for Jovan and his innocence?
After Cathy’s closing argument to a packed courtroom, Cathy had written
me a note on my yellow pad: Did the crier cry for us? I wrote her back,
Yes, but not as much. She makes me nervous. . . . If crier is foreperson, we’re in
trouble.

“Has the jury reached a verdict?” the judge asks.

“Please give me the verdict,” the judge says.

Hand to hand, the verdict forms are passed down the row of jurors.
Jovan’s trembling increases until he is shaking violently, his torso bobbing
back and forth.

I put my arm around his back and take hold of one of his arms. Cathy
does the same from the other side. “It’ll be all right,” she whispers to him.

She looks across Jovan to me. And I know we are both wondering
whether she is telling the truth. Or whether this is the end for Jovan
Mosley.

In the following video, Laura Caldwell and Jovan Mosley tell the story behind Long Way Home.

Inspired by Mosley’s case and his challenges of rejoining society, Caldwell founded Loyola’s Life After Innocence that assists wrongfully convicted individuals or other innocent persons affected by the criminal justice system in order to help them re-enter society and reclaim their lives.

For more information on Laura Caldwell and her book, visit the links below. 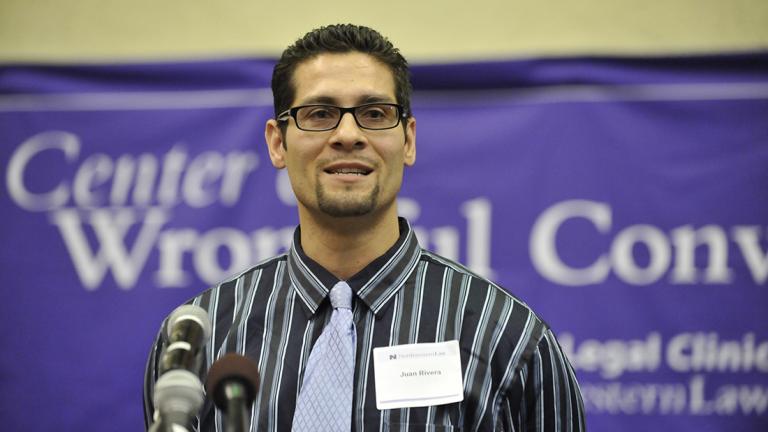