Alongside fentanyl, fatal overdose cases involving a veterinary drug almost unheard of in the area five years ago have quietly ballooned.

Data from the Cook County Medical Examiner’s Office shows 146 opioid-related deaths last year where xylazine was listed as a primary cause, marking a 16.8% increase from 2021. The current numbers are preliminary and will likely increase as there are 564 pending toxicology tests from last year as of Tuesday.

Testing for xylazine is standard when a drug overdose is suspected, according to the Cook County Medical Examiner’s Office and other area coroners. Cook County recently estimated the total number of opioid-related deaths last year will surpass the total in 2021.

Xylazine accompanied 8.4% of all opioid-related deaths in Cook County in 2022, up two percentage points from 2021.

First discovered in 1962, xylazine is used in veterinary medicine as a sedative and pain reliever. It was connected to “speedballs” (a combination of heroin and cocaine) in Puerto Rico in the early 2000s and is now most commonly called tranq or tranq dope.

Users are not always aware of its presence. Some seek it out while others avoid it.

Not approved for human use, the drug is “frequently found mixed with deadly opioids, like fentanyl, and has been detected in mixtures containing cocaine, heroin, and a variety of other illicit drugs,” according to a statement from the Drug Enforcement Administration Chicago Field Division.

The use of xylazine can cause severe problems including necrotic skin ulcers, changes in heart rate and low blood pressure, according to reports from the Food and Drug Administration and National Institutes of Health. Wounds from injecting the drug can lead to amputations.

Adding to the danger of the drug, Naloxone, which is often used to reverse opioid overdoses, doesn't respond in the same way to xylazine. Despite that, clinicians still recommend its use.

While xylazine's growing presence is reflected in the number of fatal overdoses, local harm reduction organizations say its rising presence in the area’s drug supply is noticeable in other ways.

Organizations like the Chicago Recovery Alliance are working with users of xylazine to minimize its potentially fatal consequences. The group provides clean syringes and other supplies to people who use drugs, as well as counseling services and HIV and Hepatitis C testing.

Taylor Wood, the Chicago Recovery Alliance’s lead technician and drug checking program manager, has been in contact with distributors, individual users and even a bar wanting to test bags that were confiscated or found on the floor.

It’s sometimes hard to identify xylazine fast enough in the Chicago drug supply, Wood said, estimating that it makes up between 4 to 6% per bag tested. Wood said the substance has increased in Chicago’s drug supply since mid- to late-2021, and that about 20% of the opioid samples tested locally by the organization contain xylazine.

Wood has seen the wounds that lead to amputations, and said peer outreach and public health workers commonly see addiction and other injuries.

“Even drug treatment programs, they don’t know how to deal with it yet,” Wood said. “A lot of people who fall victim to it don’t have many options in terms of assistance.”

Chicago Recovery Alliance offers services at its warehouses and vans. It has drop-in drug testing services at the warehouse on West Taylor Street on Mondays from 5 to 7 p.m., Wednesdays from 4 to 6 p.m. and Saturdays from noon to 2 p.m. There are also anonymous drop boxes at Community Outreach Intervention Projects' West Side location, 4756 W. Madison St., during open hours, Wood said.

The Night Ministry, which provides housing support, social services and health care to the homeless community in Chicago and those experiencing poverty, is also seeing the effects of the drug. The organization's mobile medical program includes care for overdoses and xylazine wounds.

Stephan Koruba, a senior nurse practitioner for the Night Ministry, says some of these clients, worn down by years on the street, wait for care until the last minute because of previous negative experiences with the health system. Hesitation can lead to serious consequences including blood clots, amputations or even death.

“We see all that stuff. And xylazine just makes the worst outcomes happen faster and more intense,” Koruba said. “It is a big deal.”

The Night Ministry receives reports every two weeks from the city based on 911 data about where overdoses are most common so that harm reduction services including education and testing can concentrate on that area, Koruba said.

“You know, if folks could imagine, ‘Hey, I got to make sure I have my Narcan today before I go to work,’ it's a different reality, and it drives it home,” Koruba said.

Three Republican members of the House of Representatives recently wrote a letter to the DEA and Customs and Border Protection looking for an update on their response to xylazine, and suggested they would introduce legislation if the DEA does not schedule the drug, according to media reports.

Researchers have also found a strong connection between fentanyl and xylazine in fatal overdoses.

He published a report last year about fatal overdose cases in Cook County and the spike in xylazine-associated deaths in 2021. More than 99% of these cases involved fentanyl or fentanyl analogs, the report said.

“I think the overarching umbrella we need to combat this problem is through a harm reduction lens, recognizing that there are people who use drugs and that they deserve treatment to prevent a fatal overdose,” Chhabra said. “Those include things like expanded access and easier access to naloxone, and low-barrier access to medications for opioid use disorder. Those are things like buprenorphine, suboxone, methadone, as well as the decrease in the stigma for people who use drugs when they do come to the health care system.”

Naloxone, commonly administered to reverse opioid overdoses, does not work the same way with xylazine. However, Chhabra still encouraged its use in overdose cases.

“The vast majority of these deaths involving xylazine also involve fentanyl,” Chhabra said. “So naloxone should absolutely still be given in those circumstances, just with an understanding that it may be less effective.”

Most fatal overdoses in Cook County involving xylazine involve Chicago residents, though since 2020, there have been more than five cases each involving residents of Cicero, Chicago Heights and Schaumburg.

A recent ABC-7 Chicago/League of Women Voters mayoral debate featured candidates answering a question about opioid addiction and fatal overdoses. Safe injection sites, where users can be supervised while using drugs, were one proposed solution by Roderick Sawyer and Ja’Mal Green.

All of the candidates discussed mental health care and harm reduction. Both Brandon Johnson and Paul Vallas mentioned a family connection to addiction.

Spreading Across the Area

Public data from the Will County coroner showed 9 of 135 overdose cases in 2022 identified xylazine as a cause of death. All of those cases also involved fentanyl. The total grew to five cases in 2021 from two in 2020.

Kane County Coroner Robert Russell said his office handled 78 opioid-related deaths in 2021, and estimated the final total in 2022 would be similar. He identified one case in 2021 with a positive test for xylazine, and five in 2022.

Russell said he had seen at least one case involving xylazine, which he described as “flesh disintegration.”

Lake County identified four overdose cases where xylazine was present in 2021, and seven cases so far in 2022, according to a toxicologist with the Coroner’s Office. McHenry County increased from one xylazine death in 2021 to two in 2022. The 2022 figures for both are preliminary.

The coroner in DuPage County did not respond to questions about xylazine and overdose cases.

Testing identified xylazine in a sample from Springfield this year, showing its reach may not be limited to the Chicago area.

Though opioid use affects all racial and ethnic groups, the legal and health consequences fall disproportionately on communities of color. Drug arrests and fatal overdoses cluster geographically in West Side neighborhoods in Chicago including Garfield Park and Humboldt Park.

About 55% of fatal opioid overdoses in Cook County involved Black residents last year. The figure is similar for xylazine cases, despite representing 22.3% of the population, according to the latest census figures.

A lower percentage of overdose deaths in Chicago involve xylazine than in Philadelphia, where use of the drug was first documented in 2006. The drug has moved across the country from the Northeast. The Philadelphia medical examiner reported that 90% of street drugs sampled there contained xylazine.

A recent DEA report stated xylazine can be purchased cheaply by traffickers on the internet from international suppliers, and it has been found in raids where drugs are sold and stored.

Labs identified an increase in xylazine showing up in tests conducted by DEA labs every year since 2015. It appeared in nearly 9,000 items tested by labs in 2021, according to the DEA.

The local DEA lab also registered a spike in exhibits seized throughout Illinois that tested positive for xylazine. The figure increased by 50% in fiscal year 2022 with a total of 39 seizures. 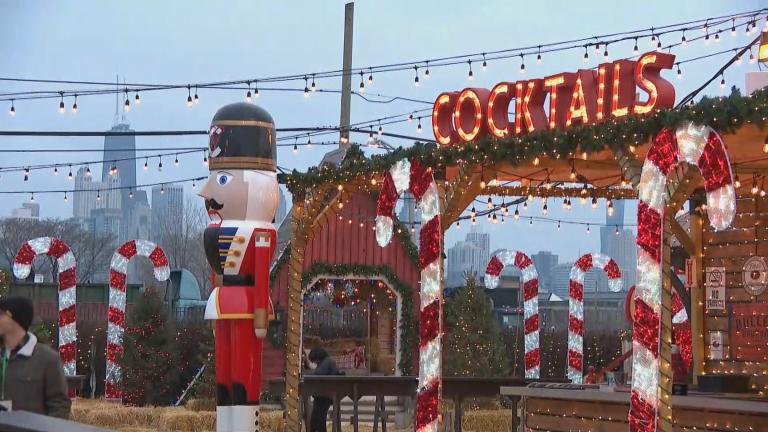 Maintaining Sobriety During the Holidays, Overcoming Stigma Within Latino Communities

Drug and Alcohol Deaths Increasing Among US Adults 65 and Older, CDC Data Shows