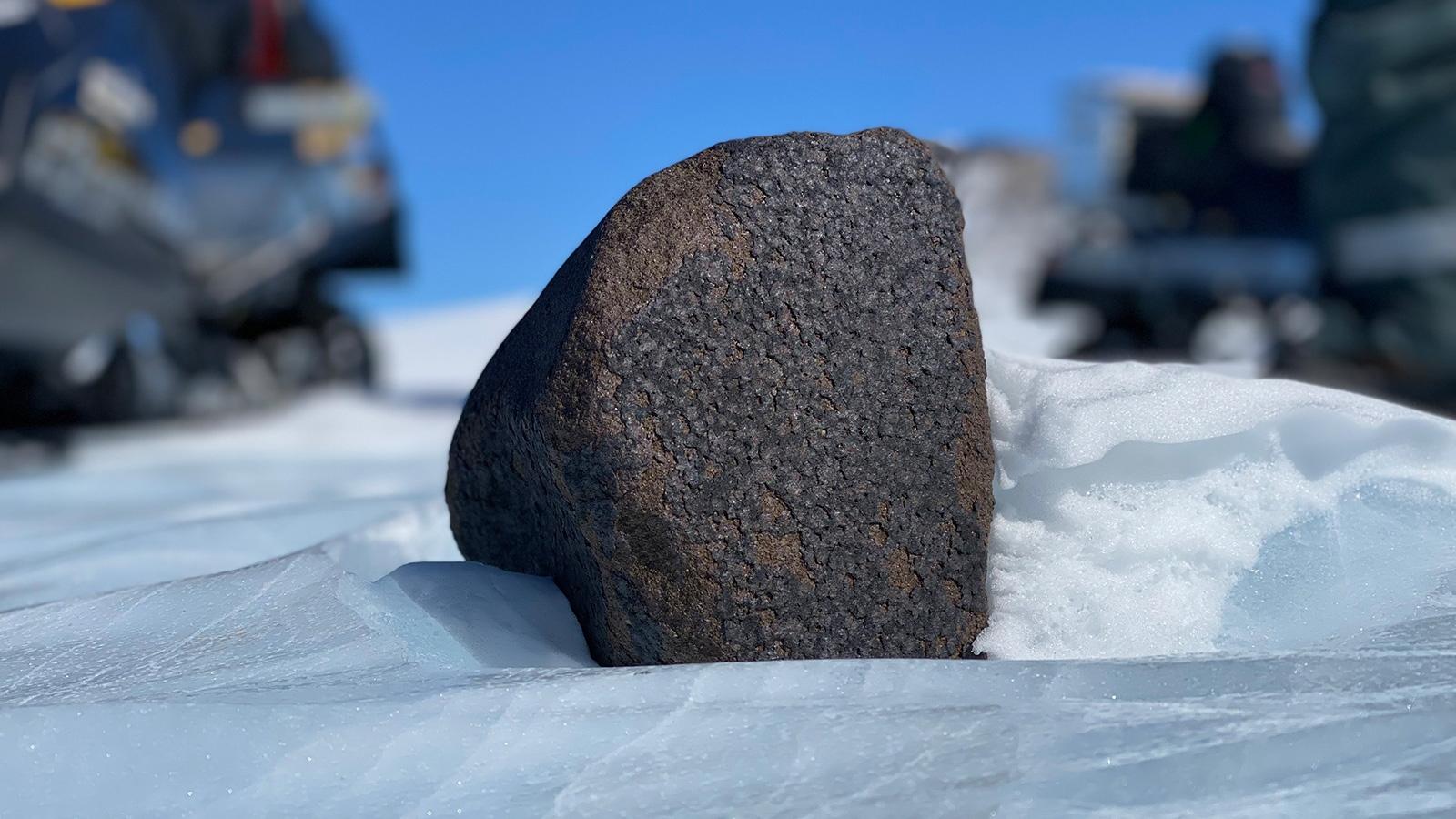 During an expedition to Antarctica that concluded Jan. 16, 2023, researchers found five meteorites, including one of the largest specimens recovered from the continent. (Credit: Maria Valdes)

(CNN) — During a recent excursion to the icy plains of Antarctica, an international team of researchers discovered five new meteorites — including one of the largest ever found on the continent.

The rare meteorite is about the size of a cantaloupe but weighs a hefty 17 pounds. The specimen is one of only about 100 that size or larger discovered in Antarctica, a prime meteorite-hunting location where more than 45,000 space rocks have been tracked down.

Now, the exceptional find is heading to the Royal Belgian Institute of Natural Sciences in Brussels, where it will be studied. And Maria Valdes, a research scientist at Chicago’s Field Museum of Natural History and the University of Chicago who was part of the expedition team, has kept some of the material for her own analysis.

Valdes’ area of focus is cosmochemistry. That “broadly means that we use meteorites to study the origin and evolution of the solar system through chemical methods,” she told CNN. She’ll take her samples and use strong acids to dissolve them before using a process called calibrated chemistry to isolate various elements that make up the rock.

“Then I can start to think about the origin of this rock, how it evolved over time, what kind of parent body it came from, and where in the solar system that parent body formed,” Valdes said. “Those are kind of the big questions that we try to address.”

Meteorites strike Earth evenly across its surface, so Antarctica is not home to a disproportionately large concentration of them, Valdes noted. But the pure white ice is an ideal backdrop for spotting the jet black rocks.

Hunting for meteoroids is “really low tech and less complicated than people might think,” Valdes said. “We’re either walking around or driving on a snowmobile, looking on the surface.”

But the team did have an idea of where to look. A January 2022 study used satellite data to help narrow down locations where meteorites were most likely to be found.

“Meteorites themselves are too small to detect from space with satellites,” Valdes explained. “But this study used satellite measurements of surface temperature, surface slope, surface velocity, ice thickness — things like this. And it plugged (the data) into a machine learning algorithm to tell us where the highest probabilities of finding meteorite accumulation zones are.”

Distinguishing a meteorite from other rocks can be a tricky process, Valdes said. Researchers look for fusion crust, a glassy coating that forms as the cosmic object plummets through the Earth’s atmosphere.

“A lot of rocks can seem like they’re meteorites, but they’re not,” she said. “We call these meteor-wrongs.”

Another distinguishing characteristic is the potential specimen’s weight. A meteorite will be much heavier for its size than a typical Earth rock because it’s packed with dense metals.

The conditions the researchers endured were grueling. Though Valdes and three other scientists carried out their mission during the continent’s “summer,” which offered 24 hours of daylight, temperatures still hovered around 14 degrees Fahrenheit, according to a news release from the Field Museum.

The research team spent about a week and a half with a polar field guide, living in tents pitched on the icy terrain. However, Valdes said she and her colleagues also spent time at a Belgian research station near Antarctica’s coast, where they enjoyed warm, cheesy foods, such as fondue.

When it comes to future research, the good news, Valdes added, is that the five meteorites she and her colleagues discovered on this expedition are just the tip of the iceberg.

“I’m eager to go back there, for sure,” she said. “Based on the satellite study, there are 300,000 meteorites, at least, waiting to still be collected in Antarctica. And the larger the (number of) samples that we have, the better we can understand our solar system.”