Thanks to their irresistible tree-climbing, rope-swinging antics, the white-cheeked gibbons are some of Lincoln Park Zoo’s most popular residents, and the crowd-pleasers’ outdoor enclosure is a favorite destination of visitors.

What most people don’t realize is that every time they’ve stopped to watch the gibbons’ acrobatics, they’ve stood in the shadow of the zoo’s oldest inhabitant.

A bur oak (Quercus macrocarpa) has towered over the zoo’s south lawn, opposite the primate house, since before there even was a zoo. At an estimated 250 to 300 years old, the tree predates not only the founding of the zoo, but the founding of the United States of America.

“Millions of people have passed the tree and maybe not even understood what they were walking next to, which is amazing,” said Katrina Quint, director of horticulture at the zoo. “Just think if the tree could talk what it would tell us. I would like to know.”

Bur oaks, with their furrowed trunks, outstretched canopies and massive, mossy-capped acorns, would have been among the dominant tree species in the region’s savannas before Europeans began settling in the area.

Renowned ecologist Aldo Leopold said of the species: “He who owns a veteran bur oak owns more than a tree. He owns a historical library, and a reserved seat in the theater of evolution.”

Today, oak savannas are considered a globally imperiled ecosystem, and how the zoo’s tree, which staff has dubbed the “legacy oak,” survived Chicago’s explosive growth is a mystery.

Time is running short to become acquainted with the bur oak, and then bid it goodbye. The tree is reaching the end of its life and will be removed sometime in 2023.

“If you want to come see a beautiful structure, a majestic bur oak tree, please do it,” Quint said. “Please come out to the zoo and see it.” 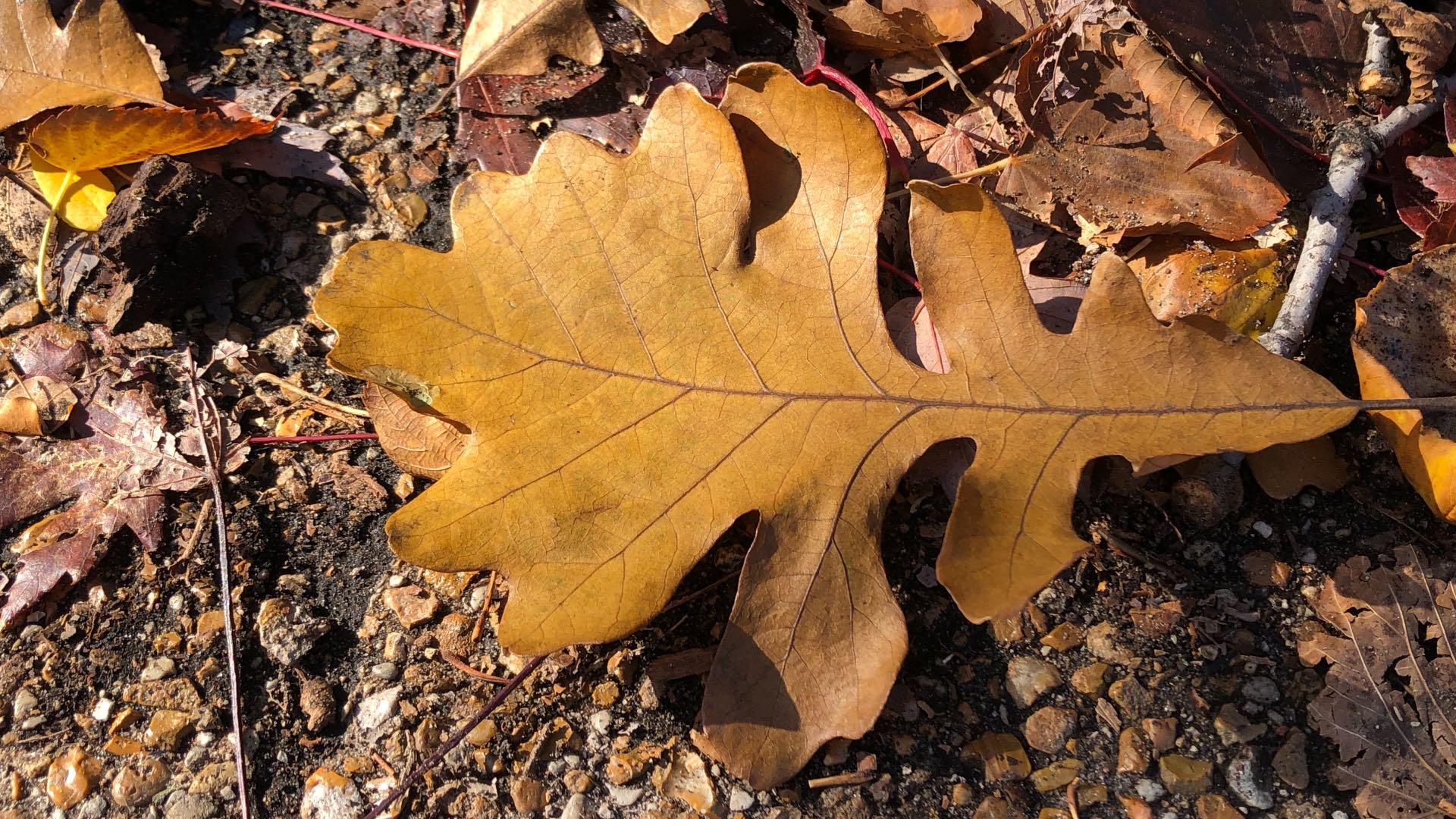 Though it seems obvious once the point is made, Lincoln Park Zoo is as much a home for plants as it is for animals.

The zoo’s 50 acres, including the Nature Boardwalk, are an accredited arboretum. Between indoor and outdoor vegetation, there are some 300 species, Quint said, ranging from natives like the bur oak to tropical exotics used in exhibits to imports like the katsura tree, which smells like cotton candy in the fall.

But it’s only been within the last decade that the zoo created its own in-house horticulture department, having formerly contracted out care of the grounds.

“That really switched the focus from maintaining a specific landscape to building out bigger, better gardens,” said Quint, who joined the zoo three years ago, coming over from Morton Arboretum.

Her team wears multiple hats, one of which is to work in consultation with the veterinary staff to understand how an animal might react to a plant, which plants might be toxic to certain animals, and what kind of vegetation might serve as enrichment for an animal.

“Like Japanese macaques — we planted some willows in there recently and they just used them for fun. They’re completely destroyed,” she said of the plants, “but that’s part of it, that’s how we give them enrichment.”

The horticulture staff also oversees the zoo’s formal gardens, which are a mix of annuals (some 15,000) and perennials, and the informal park-like plantings that double as habitat for squirrels, birds and other non-captive creatures.

“You have the whole natural environment, which you have a lot less conrtol over,” Quint said. “That might mean you have a rabbit chomping on your witch hazel bush and you’re worried about it getting eaten.”

Where other gardens might view rabbits as a pest and attempt to eradicate the population, the zoo will opt for solutions like fencing to protect the plant. “We strive to coexist with wildlife here,” Quint said.

And let’s not beat around the witch hazel bush, plenty of that fencing also is in place to minimize the damage caused by the animal the zoo welcomes inside its gates every day — humans.

“Yeah, so one of the challenges is people,” said Quint. 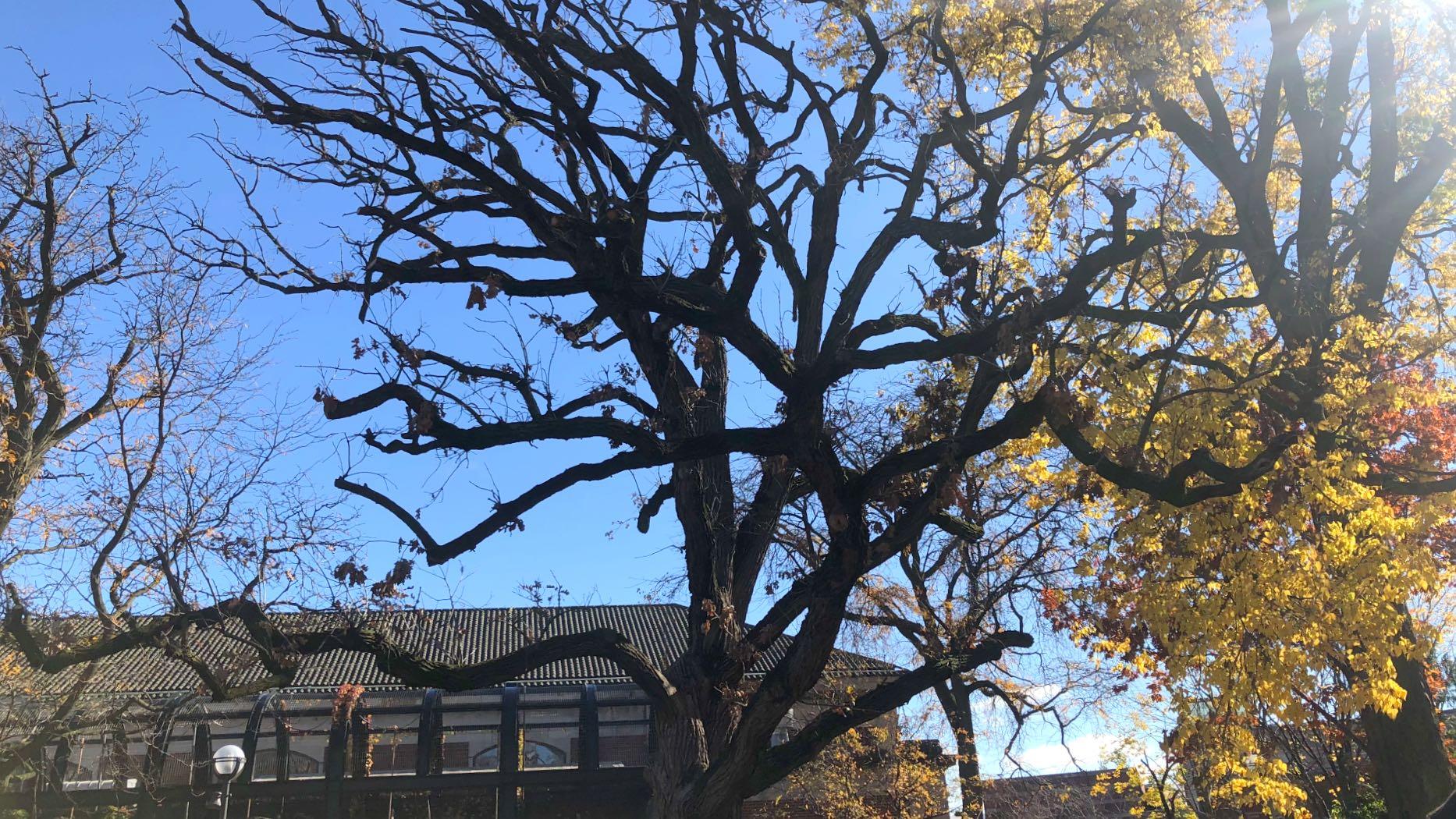 "I love looking at old trees and just kind of reveling that it's something completely out of control and has grown completely on its own," said Katrina Quint, director of horticulture at Lincoln Park Zoo. Pictured: The zoo's "legacy" bur oak. (Patty Wetli / WTTW News)

There are obvious issues like trash and pollution, but perhaps the most detrimental impact humans have on trees is one that, at the zoo at least, is also unavoidable: foot traffic.

Every step we take compacts the soil on the zoo’s grounds and ultimately harms the root systems of trees, which are closer to the surface than people might think, Quint said.

Most roots are found in the top 18 to 24 inches of soil, where they collect the water and nutrients that are transported to the leaf canopy. Compacted soils hold less water and when it does rain their density acts more like pavement, actually increasing runoff instead of absorption. Add in climate change, specifically periods of drought, and trees start to decline, Quint explained.

“Not having consistent water is a big problem,” she said. “The weather events we’ve been having, we’ll have an entire spring of rain and then no rain for several weeks, which is very detrimental for the the root zone.”

By the time Quint arrived at Lincoln Park Zoo, the legacy bur oak had already suffered a damaging blow during a storm, losing a sizable limb five years ago. At the time, staff was concerned about underlying decay but an exam showed the tree to be sturdy.

Then, two years ago, the oak dropped all of its leaves in August.

“That sparked my attention,” Quint said. “I was like, ‘OK, something’s not right with this tree.’”

The perimeter of fencing around the tree was widened to keep people off its roots — a tree’s roots typically fan out as far out as its canopy, and likely two to three times as far — and Quint brought in arborists to invigorate the roots using a technique known as air spading, in which compressed air is used to loosen the soil around roots.

“Unfortunately in this case it was too late for this tree. The damage had been done,” she said. “But also the tree is 250 to 300 years old. So it was reaching the end of its life, it was nearing the natural end of living in an urban setting.” 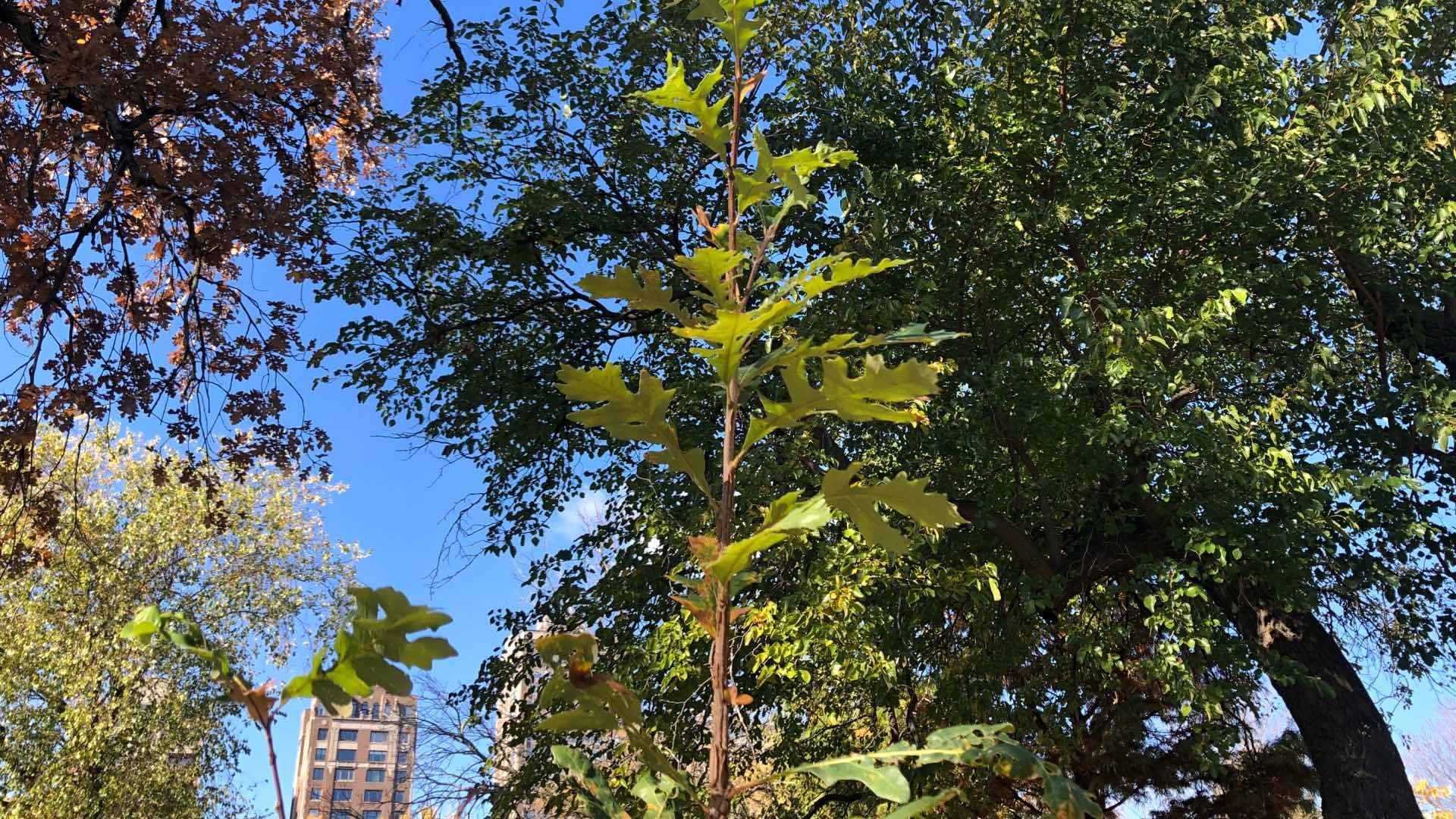 A baby bur oak has sprung up on its own at Lincoln Park Zoo. Slow-growing oaks are said to be trees "to plant for future generations." (Patty Wetli / WTTW News)

In the near term, she wants to make sure the legacy bur oak receives a proper sendoff.

“We were slightly joking the other day that the horticulture team might need the day off when the tree comes down because it’s very sad for us to see something so beautiful removed,” she said. “It’s a big deal for us.”

Along with encouraging visitors to come pay their respects and honor the tree’s significance, staff at the zoo is brainstorming ways to preserve and re-use parts of the tree’s wood.

Some could find its way to the Nature Boardwalk, or a nature play space, or wind up as perches in animal enclosures, Quint said. There’s also the potential for an interpretive exhibit, showing the age of the tree and different historical events that took place during its lifespan.

“It’s a long process,” Quint said. “Tree care experts are working with our own staff to really understand the health of the trees that we have now.”

That includes things like pruning, particularly when trees are young so they build a strong infrastructure, and making sure there’s a diversity of species in order to guard against a lone pest or disease wiping out huge swaths of the zoo’s canopy (think Dutch elm disease or emerald ash borer). Diversity of age is another key consideration.

Lincoln Park Zoo isn’t alone in this approach. Across the region, land managers are responding to a 2020 tree census led by Morton Arboretum, which showed a potentially troublesome dominance of silver and Norway maples, along with invasive buckthorn. Chicago Botanic Garden has developed a list of the 40 best trees to plant going forward, accounting for climate change.

An equally concerning finding of the census: Only 5% of the region’s trees and shrubs could be labeled large — more than 18 inches in diameter — indicating a lack of older trees and, consequently, the environmental benefits they provide, including shade and carbon storage.

It’s important to continually plant new trees — known as succession planting — so that when older trees age out, there isn’t a huge gap in mature trees, Quint said.

“A regenerative forest would be doing just that, producing its own young essentially,” she said. “We’re trying to essentially mimic that here in a more controlled setting at our arboretum.”

The trick, at the zoo, is finding the right place for a new tree.

“We don’t have a lot of space. We want our trees to be able to mature and if they can’t, if there’s not enough space for them to mature, then that’s also not a service to the tree or the canopy,” said Quint, “So it’s kind of a give or take.”

While the legacy bur oak is in many ways irreplaceable, staff did manage to gather six acorns off the tree this year and has hopes they’ll be viable. But the oak itself may have done a little succession planting of its own.

“We do have a lot of oak seedlings coming up around the area that could very well be from this tree or one of its cousins right next to it,” Quint said. “We’re working at making sure we mark which of those seedlings we want to save. Sometimes we’ll go ahead and dig them and repot them ... other times if they’re in an OK spot, we just leave them and let them start growing.”