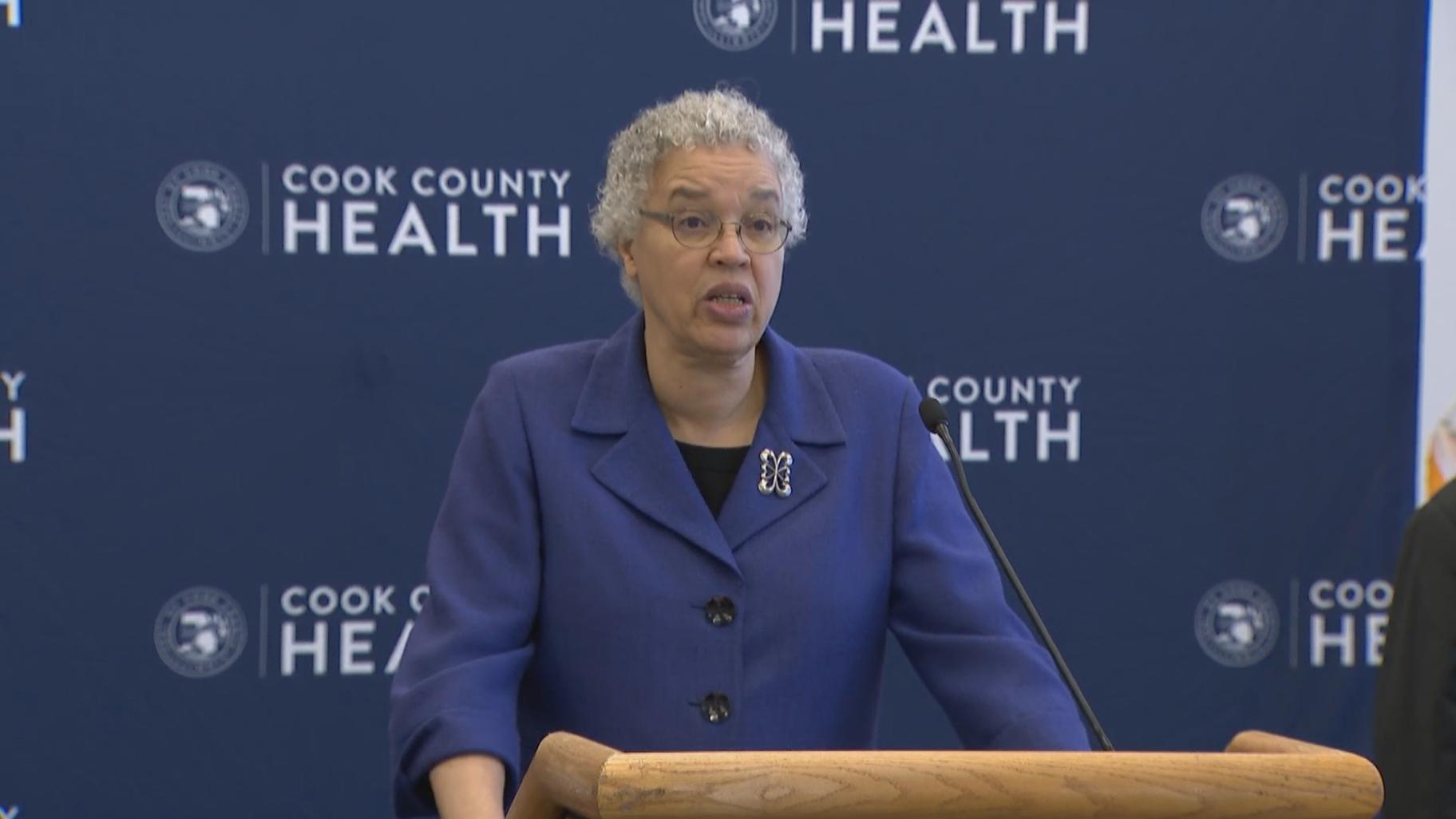 Cook County Board President Toni Preckwinkle declared victory in her bid for a fourth term in office, thanking Cook County voters for their support.

“I’m grateful they have entrusted me to run the nation’s second-largest county in the country for the past twelve years, and look forward to all the good work that lies ahead,” Preckwinkle said in a statement.

With more than 98% of precincts reporting, Cook County Board President Toni Preckwinkle has a commanding 67% of the vote in her bid for a fourth term in office, according to unofficial vote totals.

Republican challenger Bob Fioretti has 29% and Libertarian hopeful Thea Tsatsos has 3%. They did not immediately respond to requests for comment.

Preckwinkle, who’s vying for a fourth term in office, and her fellow Democrats are looking to maintain the party’s control on all countywide seats. But they appear to have failed in their second attempt to beat the only incumbent Republican on the Cook County Board running for reelection, Cook County GOP Chair Sean Morrison.

With 100% of precincts reporting, Morrison holds a lead with 52% of votes over challenger Daniel Calandriello in the southwest suburban 17th District, who is at 48%.

WBEZ reports that Morrison told his election night party he’s “proud of the race that we ran,” but disappointed that Democrats will still control most of the Cook County Board.

In the 9th District, currently held by retiring Republican commissioner Peter Silvestri, GOP candidate Matt Podgorski leads Democratic candidate Maggie Trevor 48.8% to 47.7% with 100% of precincts reporting, according to unofficial totals. Neither campaign immediately responded to a request for comment.

Preckwinkle had previously said her current term, to which she was elected in 2018, would be her last. But after losing the 2019 race for mayor of Chicago to Lori Lightfoot, Preckwinkle reversed that stance.

Preckwinkle’s popularity as a mostly low-drama leader in Cook County is being aided this year by a largely smooth budgeting process, with tax revenue and COVID stimulus funds adding to county coffers.

“The last two years have been a test unlike any other, but I’m proud of how Cook County guided our 5.2 million residents through the COVID-19 pandemic and provided response and recovery resources every step of the way,” Preckwinkle told WTTW’s Voter Guide. “This campaign is particularly important to me because it is an opportunity to share with residents the once-in-a-lifetime investments Cook County will make using the $1 billion in American Rescue Plan Act funding over the next five years.”

In her re-election bid, Preckwinkle is re-matched against attorney and former Chicago alderman Bob Fioretti. Fioretti lost his bid against Preckwinkle in the 2018 Democratic primary and is now running as a Republican. He’s made anxiety about crime and violence a centerpiece of his campaign.

“Crime has surged throughout Cook County and Cook County Board President Toni Preckwinkle is the chief architect of the failed policies causing this crime surge,” Fioretti told WTTW. “Preckwinkle, along with her protégé and hand-picked State’s Attorney Kim Foxx, have repeatedly failed Cook County residents by enacting harmful, dangerous policies and have been ineffective at providing public safety. Preckwinkle led the vote to defund police, continues to minimize law enforcement, and treats violent offenders as victims, while disregarding the well-being of law-abiding Cook County residents.”

Fioretti faces an uphill battle in his bid as a GOP candidate. The Cook County Board has not had a Republican president since Richard Ogilvie served from 1966 to 1969 before becoming the governor of Illinois.

“My campaign serves to spread the Libertarian ideas of personal freedom and individual responsibility, and to help further establish the LP as a force in Cook County,” Tsatsos said.

Democrats have long dominated Cook County politics. On the 17-seat county board, only two Republicans serve as commissioners: Cook County Republican Party Chair Sean Morrison, who’s running for reelection, and Peter Silvestri, who opted not to run again after nearly three decades on the board.

In the 2018 election, Democrats successfully ousted two of the the four Republicans on the board, but Morrison narrowly held on to his seat. He’s served on the board since being appointed in 2015 and has made inflation, taxes, and concerns about crime the centerpiece of his campaign.

“Much of the crime problem stems from not properly charging and sentencing criminals. These ‘soft on crime’ policies have emboldened criminals and this must change,” Morrison told WTTW. “As commissioner, I will continue to advocate for stronger policies that strengthen the prosecution and sentencing of criminals.”

Aiming to knock Morrison off the board is attorney and former Orland Park trustee Daniel Calandriello. He’s also nodded toward constituent worries about crime rates, saying public safety would be his top priority if elected.

“If elected, I will be the only former prosecutor on the board, that experience provides me with invaluable knowledge about our criminal justice system to protect our families. We need to make better investments in public safety technology, training, and staffing,” Calandriello told WTTW.

In the 9th District, currently held by retiring Republican commissioner Peter Silvestri, GOP candidate Matt Podgorski leads Democratic candidate Maggie Trevor 48.8 to 47.8% with 95.5% of precincts reporting, according to unofficial totals. Neither campaign immediately responded to a request for comment.

Across all Cook County-wide offices up for election on Tuesday – Assessor, Clerk, Sheriff, Treasurer, and commissioners of the Metropolitan Water Reclamation District – Democrats currently hold all the seats and are broadly expected to maintain that dominance.

With 98% of precincts reporting, Kaegi leads Tsatsoulis 82 to 18%, according to unofficial totals.

Yarbrough currently has 70% of the vote to Peraica’s 27% and Schreiner’s 2%, with 98% of precincts reporting in.

At present, Dart has 73% of the vote, with Aguirre netting 24% and Sandefur at 3%, with 98% of precincts reporting, according to unofficial totals.

With 98% of precincts reporting, Pappas leads with 74% of the vote to Kopsaftis’ 23% and Murphy’s 2%, according to unofficial totals.