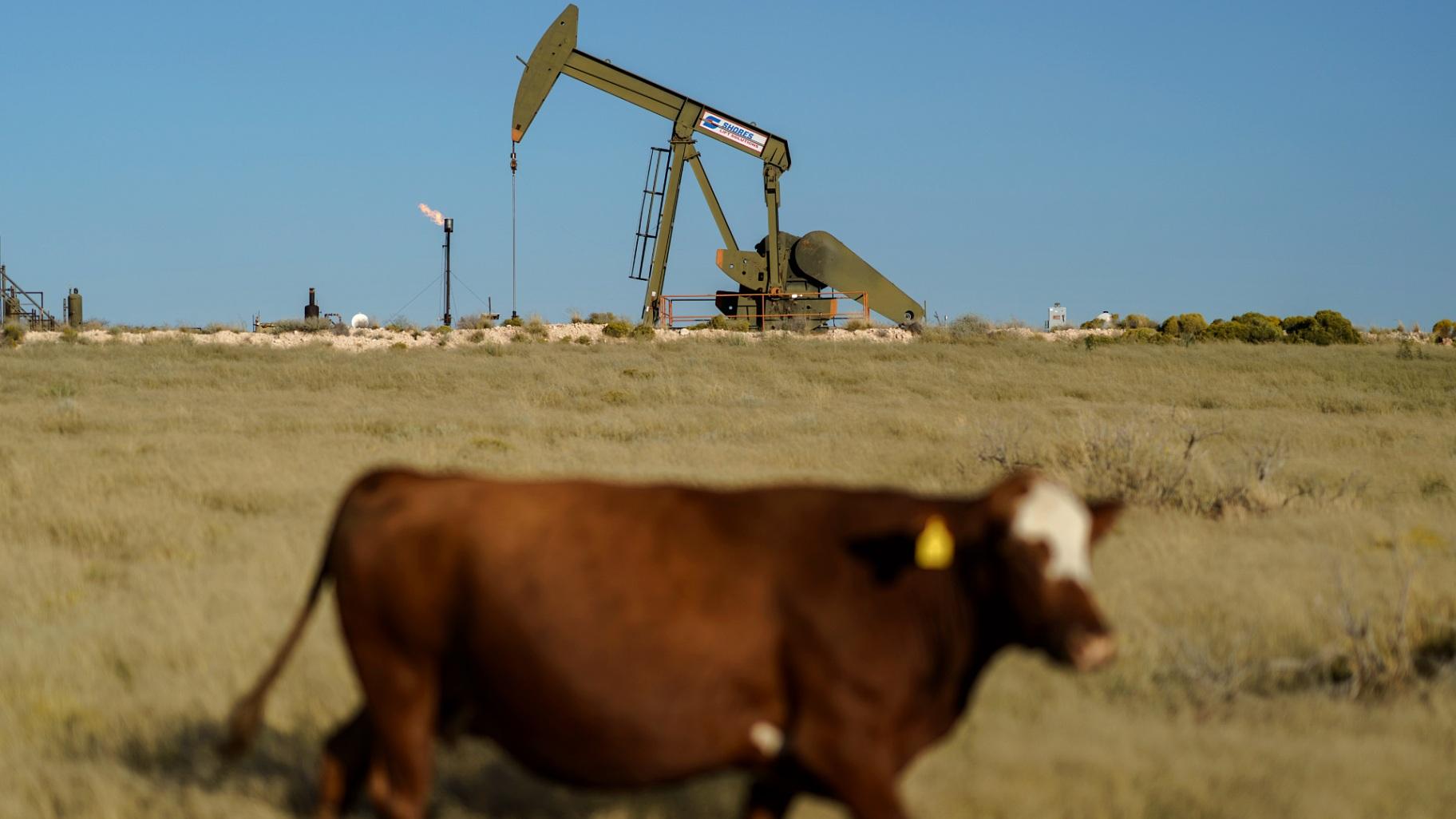 A cow walks through a field as an oil pumpjack and a flare burning off methane and other hydrocarbons stand in the background in the Permian Basin in Jal, N.M., Oct. 14, 2021. (AP Photo / David Goldman, File)

GENEVA (AP) — The three main greenhouse gases hit record high levels in the atmosphere last year, the U.N. weather agency said Wednesday, calling it an “ominous” sign as war in Ukraine, rising costs of food and fuel, and other worries have elbowed in on longtime concerns about global warming in recent months.

“More bad news for the planet,” the World Meteorological Organization said in a statement along with its latest annual Greenhouse Gas Bulletin. It’s one of several reports released in recent days looking at several aspects of humanity’s struggle with climate change in the run up to the U.N.’s latest climate conference, in Sharm el-Sheikh in Egypt.

Of the three main types of heat-trapping greenhouse gases — carbon dioxide, methane and nitrous oxide — the biggest jump from 2020 to 2021 was in methane, whose concentrations in the air came in with the biggest year-on-year increase since regular measurements began four decades ago, WMO said.

“The continuing rise in concentrations of the main heat-trapping gases, including the record acceleration in methane levels, shows that we are heading in the wrong direction,” said WMO Secretary-General Petteri Taalas.

Since pre-industrial times, which WMO sets at around the year 1750, CO2 concentrations in the air have increased by nearly 50% to 415.7 parts per million, with the U.S., China and Europe responsible for the bulk of emissions. Methane is up 162% to 1,908 parts per billion, and nitrous oxide — whose human-made sources are things like biomass burning, industrial processes and fertilizer use — is up about one-quarter to 334.5 parts per million.

Earlier on Wednesday the U.N’s climate office said current pledges to cut greenhouse gas emissions put the planet on course to blow past the limit for global warming countries agreed to in the 2015 Paris climate accord.

It said its latest estimate based on 193 national emissions targets would see temperatures rise to 2.5 degrees Celsius (4.5 Fahrenheit) above pre-industrial averages by the end of the century, a full degree higher than the ambitious goal set in the Paris pact to limit warming by 1.5 C (2.7 F).

“We are still nowhere near the scale and pace of emission reductions required to put us on track toward a 1.5 degrees Celsius world,” the head of the U.N. climate office, Simon Stiell, said in a statement. “To keep this goal alive, national governments need to strengthen their climate action plans now and implement them in the next eight years.”

A report published Wednesday by Climate Action Tracker who track nations’ pledges to reduce warming found that of 40 indicators for reducing emissions — like weaning off coal, ramping up electric vehicles or reducing deforestation — the world wasn’t on track for any of them to match the levels of emissions reductions scientists say are needed to limit warming to 1.5C. Over half of the indicators showed the world is “well off track” to cutting emissions but added that promising progress has been made.

Climatologists and environmental advocates have been raising their voices for years about the impact of climate change, by pointing to vast changes in the weather in recent decades like forest fires in China and western United States, drought in the horn of Africa and unprecedented flooding in Pakistan – to name only a few.

CO2 remains the single most important greenhouse gas generated by human activity — mainly from burning of fossil fuels and cement production — amounting to about two-thirds of the warming effect on the climate, known as radiative forcing. Over the last decade, carbon dioxide has been responsible for about four-fifths of that warming effect.

Methane accounts for about more than one-sixth of the warming effect, said WMO. Three-fifths of methane reaches the atmosphere through the burps and farts of livestock, rice farming, use of fossil fuels, biomass burning and landfills; the rest comes from natural sources like wetlands and termites.

Rob Jackson, who heads the Global Carbon Project, suggested that the spikes in methane over the last two years were “mysterious” — either blips related to the coronavirus pandemic, which temporary dented emissions, or a sign of “a dangerous acceleration in methane emissions from wetlands and other systems we’ve been worrying about for decades.”

“Concentrations of methane and nitrous oxide are not just rising, they’re rising faster than ever. While not losing our focus on carbon dioxide, we need to pay more attention to the ‘other’ greenhouse gases,” he added. “Fortunately, methane is beginning to get the attention it deserves” through initiatives like the Global Methane Pledge, a capping effort supported by the U.S. and European Union, among others.

Taalas, who has been repeating warnings about global warming for years, says the focus should remain on CO2.

“As the top and most urgent priority, we have to slash carbon dioxide emissions which are the main driver of climate change and associated extreme weather, and which will affect climate for thousands of years through polar ice loss, ocean warming and sea level rise,” he said.

NASA announced that an instrument on the International Space Station designed to look at mineral dust turned out to be a useful tool to find “super emitters” of methane from orbit. NASA shared three images showing plumes several miles long that are spewing methane.

A group of a dozen leaks from pipeline and other gas infrastructure in Turkmenistan is leaking 55 tons of methane per hour, about the same as the infamous 2015 Aliso Canyon leak, drilling in New Mexico that’s spewing 18 tons per hour and a landfill in Iran that’s emitting 8 tons per hour.

“We’re looking in places where no one is planning to look for methane,” said NASA instrument scientist Robert Green. “If it’s there we’ll see it.”