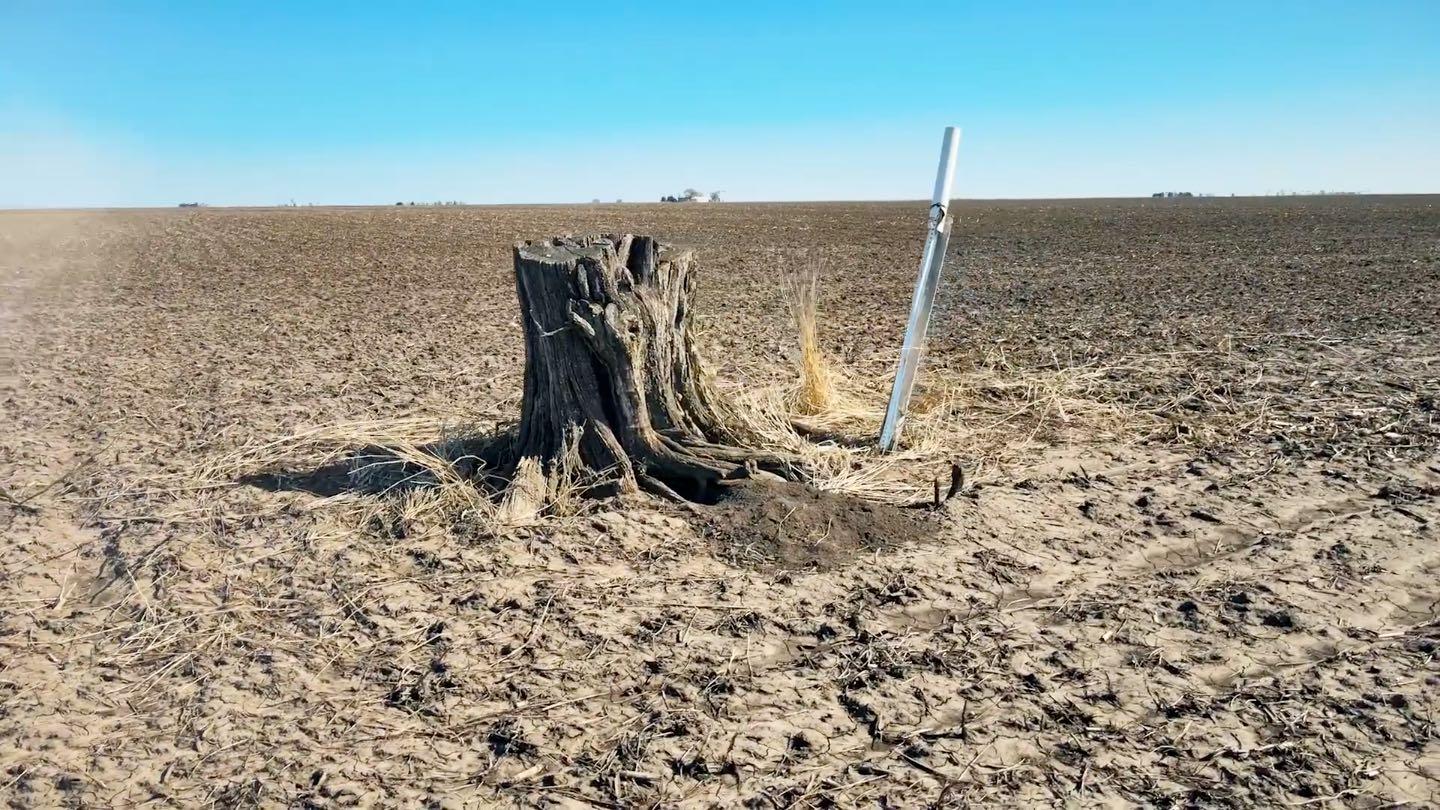 Driving south from Chicago on Interstate 57, the sameness of mile after endless mile of farmland has a way of lulling the senses to sleep.

Wake up. There's magic in those fields.

Some 50 miles south of Champaign-Urbana, a tree stump in the middle of otherwise tilled acreage has become the stuff of legends. And now it's the subject of a short documentary, "The Magic Stump."

Back in 2010, word of an unusual sighting began circulating among Illinois birders.

Tyler Funk had spotted a prairie falcon — a raptor rarely found east of the Mississippi River — in Coles County.

The prospect of this sort of chance encounter is the kind of thrill that gets birders up in the pre-dawn hours. Here was a species typically found soaring over the sagebrush steppes of the American West, taking a shine to central Illinois.

Funk, who lives in Charleston, Ill., kept his eyes peeled for the remainder of the winter, scanning for the falcon's telltale markings — a dark triangle of “armpit” feathers on the wing's underside — but the initial glimpse appeared to be a one-off.

It wasn't until November 2012 that Funk's vigilance was rewarded. "I bumped into a prairie falcon on a utility pole. I thought, 'This is just too crazy,'" Funk recounted during a 2021 episode of the Allerton Park Bird Club's podcast.

He mapped out a grid and began methodically driving in search of the falcon, joined in the quest by David Mott and Ron Bradley. It was Mott who spied the falcon perched on a solitary stump, jutting out from a farm field, the only topographical feature for a mile. Adding to the excitement: It became clear not one, but two prairie falcons were regularly hanging out on the stump.

"It just kind of escalated from there," Funk said. "It was like a part-time job escorting people around to find this stump." 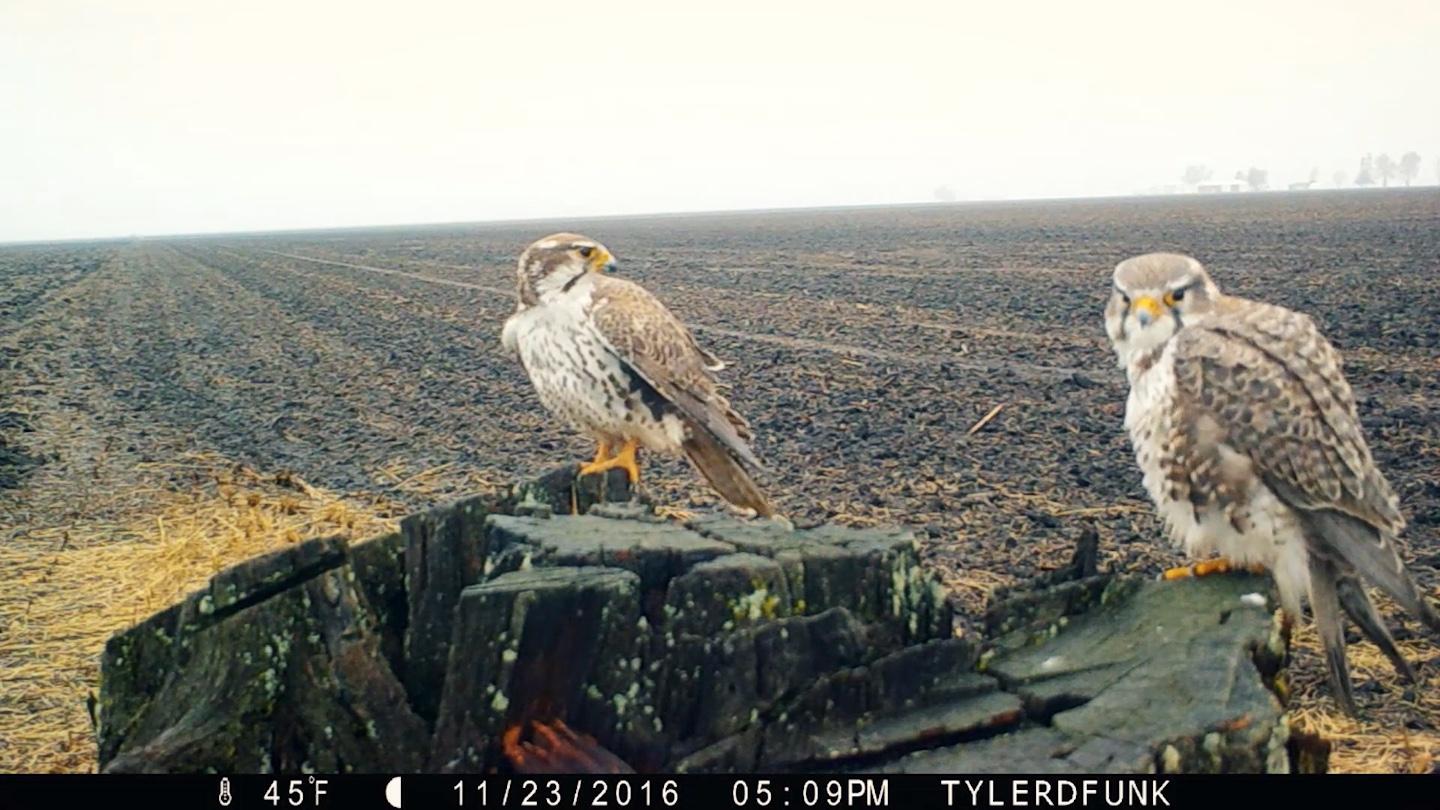 The falcons keep coming back to Coles County and the stump, which was dubbed "magic" in a callout to Chicago's "Magic Hedge" birding hotspot at Montrose Beach.

Barring a DNA test, the birds are presumed, but not proven, to be the same individuals returning year after year. Why they ventured so far east remains a mystery, but their repeat appearance is easier to explain, Funk said, pointing to research that indicates the species are extremely loyal to their wintering sites.

Over time, Funk has become familiar with the birds' routine, noting the way the raptors use the stump for stretching and preening in the morning — he calls it their "pre-flight checklist" — before heading out to hunt.

To better study the falcons' behavior on a daily basis, Funk had the idea to set up a trail camera trained on the stump, something that required permission from the farm's owner. Turns out, not even magic stumps are exempt from the rules governing private property.

Funk and his fellow birders have always staked out a position on the side of the road, using binoculars and scopes to view the falcons and the stump from a distance. On one of those excursions, he caught the farmer at work and cautiously made his approach.

The farmer OK'd the camera — "I think he thinks it's neat, maybe a little dorky," said Funk — and that's when things got even more interesting.

"You get this look at the birds when they're so comfortable. They're just relaxed — they don't know the camera's there," said Bob Dolgan, a Chicago birder. "You have the only endemic falcon to western North America, they're here in Illinois and we've got great images of them. All sorts of interesting things happen."

Dolgan, a budding filmmaker who first turned his lens on Chicago's piping plover pair Monty and Rose, sensed a story ripe for the telling. Or several stories.

"This whole thing really captured my imagination," he said.

The trail cam provided the raw material for an unscripted narrative: The prairie hawks harassed by aggressive and irascible harrier hawks, which were in turn chased off by pint-sized merlin falcons, punching above their weight.

"They're all raptors, they're all top of the food chain. They all have different modes of hunting," Dolgan said. "To get it on film is important."

Then, literally playing a supporting role, there's the stump itself, a remnant of the countless osage orange trees once planted as property line markers. "I found an amazing aerial image from 1930," Dolgan said. "You can see the old line of trees."

The question is why the stump is so attractive not only to the wayward prairie falcons and their fellow raptors, but also mink, mice, coyotes and opossum. The diversity of wildlife within a square mile of the stump is uncommonly rich.

Dolgan's theory is that the farms sits at a geographical juncture, with the stump almost exactly at the southernmost point of where the last glacier extended into Illinois.

"Everything north is very flat and to the south is rolling hills. The stump is up against a forested area, with wide open space to hunt," he said. "So (wildlife) are finding what they need." 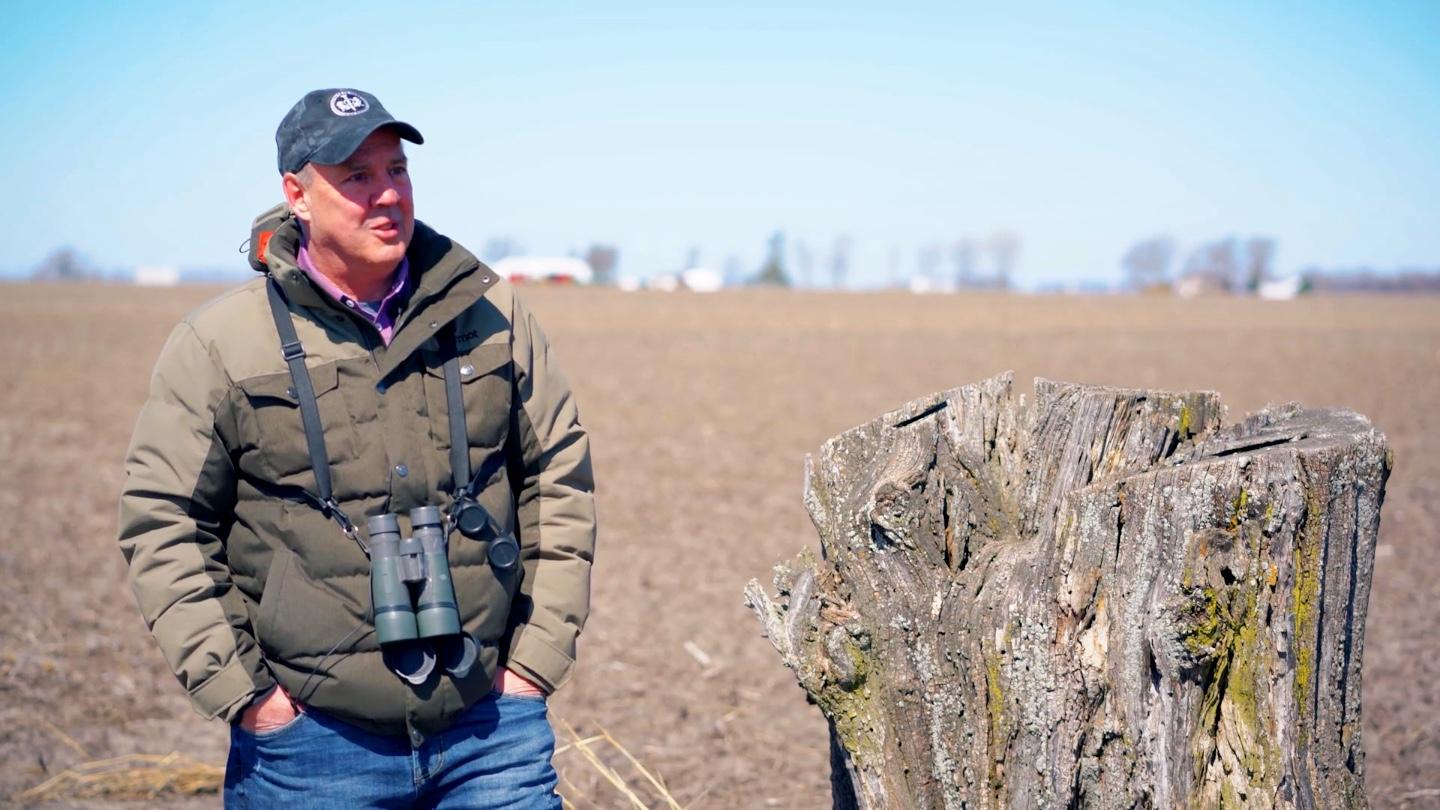 As Dolgan began weaving the different strands of the tale together, a third theme emerged: "It became a story of the friendship of the three birders ... of the joy of birding."

Raptors cover long distances and tracking them is a challenge, one that Funk, Mott and Bradley embraced to the point of obsession. "The guys are driving around, texting each other, heading out in single-digit temperatures," Dolgan said. "You're looking at tops of telephone poles, tree tops. Definitely the experience brought them closer together. That was a ton of fun to feature in the film."

Though birders are likely to be the film's most rapt audience, there's a broader message about our collective perception of nature to be gleaned from "The Magic Stump."

It would be easy to drive past the stump and never give it a second glance, but here's three guys who did stop, and look at what they found, Dolgan said.

"It's about looking at what's around you through a different lens," he said. "We don't have the dramatic vistas, but here it's taking these smaller parcels and enjoying them for what they are, if you open yourself to the experience."

It's a lesson Midwesterners like Dolgan, who grew up outside of Cleveland, need to be reminded of on occasion.

"There was a day when I was at the stump at dawn. It was silent and the stars were still out — it was kind of other-worldly and eerie. You feel like the only person on the face of the earth," he said. "This stump, those birds and that field is looking at this land differently."