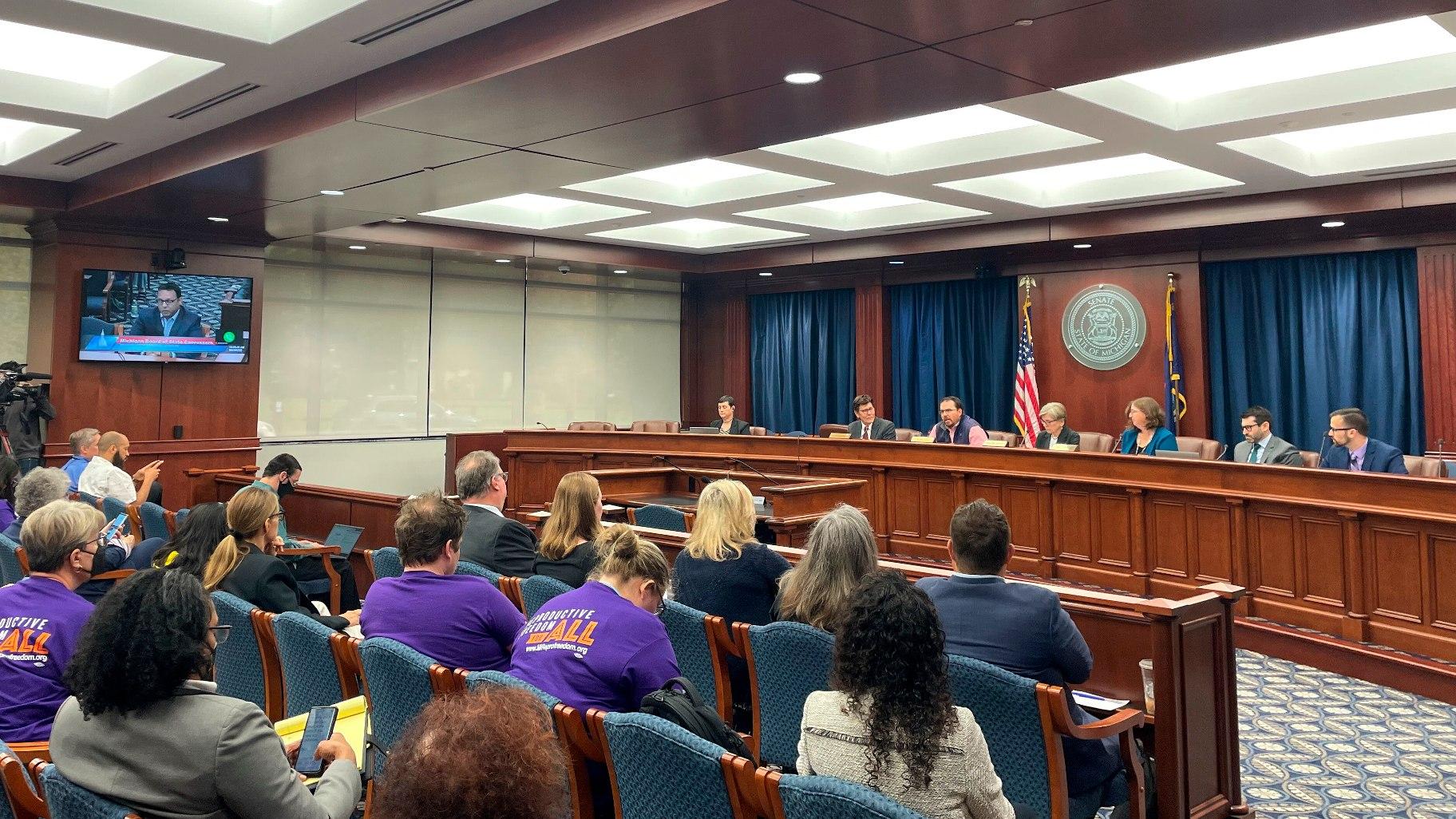 Reproductive Freedom for All leaders and supporters await the Michigan Board of Canvassers vote to send their initiative to the November ballot during a Friday, Sept. 9, 2022, meeting in Lansing, Mich. (Joey Cappelletti / Report for America via AP)

LANSING, Mich. (AP) — A Michigan election board placed an abortion-rights proposal on the fall ballot Friday, obeying an order from the state’s highest court and closing a record-breaking petition drive to try to amend the state constitution.

The amendment would affirm the right to make pregnancy-related decisions without interference in Michigan, including abortion and other reproductive services such as birth control.

The Michigan Supreme Court a day earlier ordered the Board of State Canvassers to put it on the Nov. 8 ballot. The board, comprised of two Democrats and two Republicans, had killed the proposal in a tie vote last week, with GOP members siding with abortion opponents who said the petition had improper or no spacing between certain words.

Chief Justice Bridget McCormack derisively called it a “game of gotcha gone very bad.” She said the words were legible and in correct order.

People cheered and applauded when the board voted 4-0 Friday to add it to the ballot.

“We’ve gotten that clarity,” said Republican board member Tony Daunt, who didn’t address McCormack’s criticism. “There was never any doubt in my mind that once the court spoke what we were going to do.”

The other GOP member, Richard Houskamp, denied any partisanship in rejecting the proposal on Aug. 31.

There are political implications beyond the ballot question.

Democrats say the U.S. Supreme Court’s decision to overturn Roe v. Wade is mobilizing voters and will help Democratic candidates this fall, when top races including governor, secretary of state and attorney general are on the Michigan ballot. They point to conservative Kansas, where voters overwhelmingly defeated a measure that would have allowed the Republican-controlled Legislature to tighten restrictions or ban the procedure outright.

In Michigan, abortion-rights supporters had submitted more than 750,000 signatures, easily clearing the minimum threshold and setting a record for a ballot initiative.

Addressing the board before the vote, volunteers Elizabeth Buckner and Beata Lamparski said they collected more than 5,400 signatures in 38 counties, including signatures from people who oppose abortion but believe voters have a right to decide the issue.

“We collected when it was so cold that our fingers barely worked and when it was so hot that we could barely stand. ... We did our job. Now I’m asking you to do your job,” Lamparski said.

Abortion has remained legal in Michigan even after the fall of Roe. A 1931 law that makes it a crime to perform most abortions was suspended by a judge last spring and declared unconstitutional this week.

But that decision can be appealed. If voters approve the constitutional amendment guaranteeing abortion rights, any legal fight would be moot.

A poll published this week by The Detroit News and WDIV-TV showed abortion and women’s rights as the top issue motivating Michigan residents to vote in November, ahead of inflation, education and the economy. The poll showed a majority of likely voters supporting the amendment to protect abortion rights.