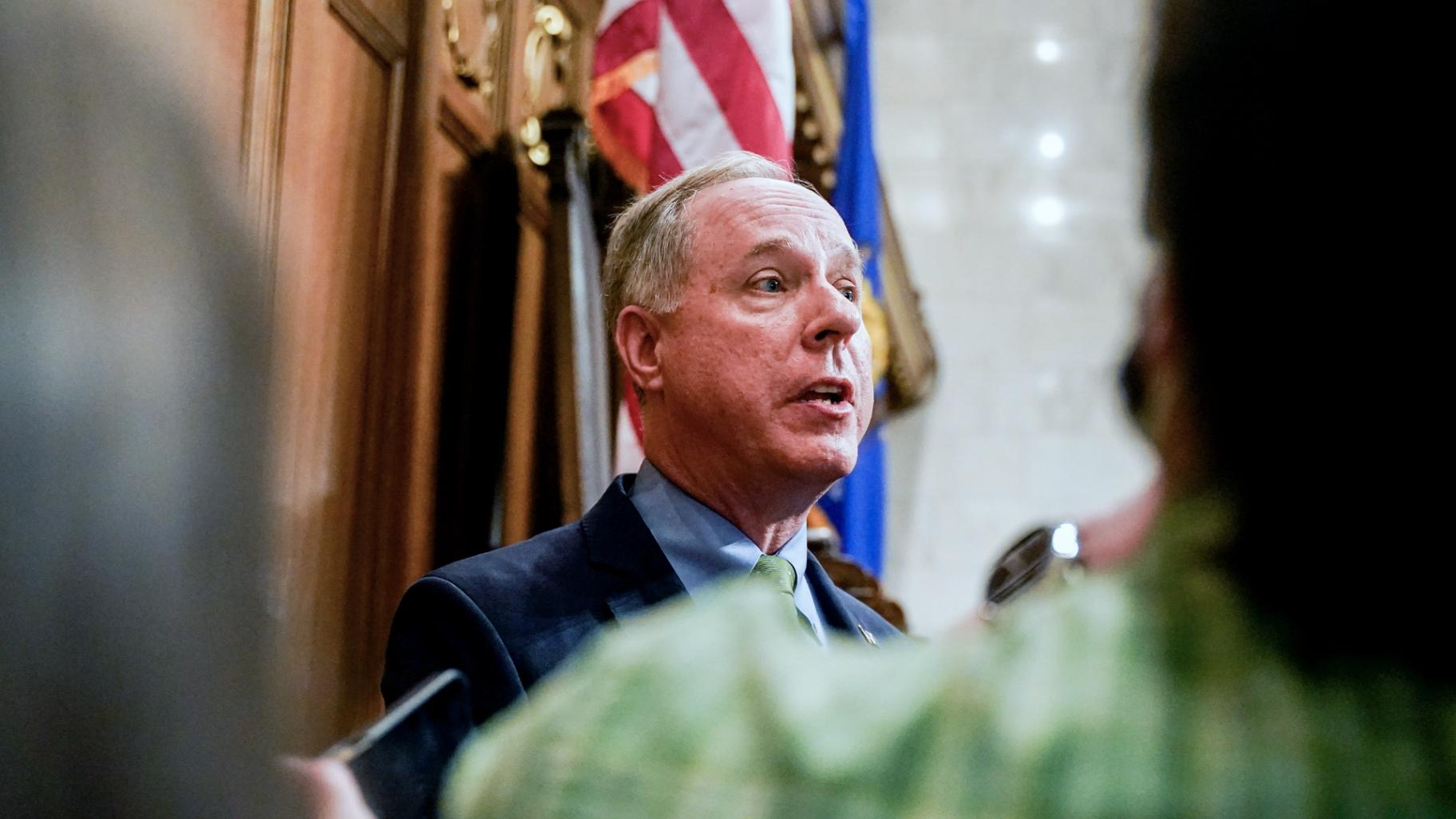 Wisconsin Assembly Speaker Robin Vos talks to the media after Gov. Tony Evers addressed a joint session of the Legislature in the Assembly chambers during the Governor’s State of the State speech at the state Capitol, Feb. 15, 2022, in Madison, Wis. (AP Photo / Andy Manis, File)

The challenger’s argument: Vos should do more to respond to former President Donald Trump's unfounded allegations of fraud in the 2020 election.

Primary challengers like the one facing Vos next Tuesday have been successfully targeting incumbent state lawmakers across the country, and Republicans are taking the brunt of it.

With more than half the state legislative primaries concluded, Republican incumbents this year have been losing at nearly twice the average rate of the past decade, according to data compiled for The Associated Press by the election tracking organization Ballotpedia. The primary loss rate for Democratic state lawmakers is similar to previous elections.

The Republican losses continued to mount Tuesday, as Trump-endorsed candidates ousted incumbent state senators in Arizona and Michigan and a conservative challenger beat the assistant majority leader of the Missouri Senate. Though not technically an incumbent, Arizona House Speaker Rusty Bowers also lost a bid for state Senate after being criticized for refusing to help Trump’s efforts to overturn the 2020 election.

In many cases, Republican lawmakers are being defeated by challengers portraying themselves as more conservative on election integrity, transgender policies, school instruction and other hot-button issues.

“We have a far-right faction that is very dissatisfied with what’s happening on the left. So if you are not rabidly a fanatic that just punches every button, then you’re going to have an issue,” said Arkansas state Rep. Craig Christiansen, who lost in a Republican primary earlier this year.

Though Christiansen considers himself “very conservative,” he drew multiple challengers and failed to advance to a runoff. That came after he voted against overriding Republican Gov. Asa Hutchinson’s veto of legislation making Arkansas the first state banning gender-confirming treatments for those younger than 18. Christiansen said he considered the legislation unconstitutional, because it lacked an exception for youths already undergoing such treatments.

Vos, who has served as Wisconsin Assembly speaker since 2013, has taken sharp criticism for not pursuing a resolution decertifying Democrat Joe Biden’s victory in the state. Trump endorsed his Republican challenger, Adam Steen, saying that “Vos refused to do anything to right the wrongs that were done” in the 2020 election.

Steen said he decided to challenge Vos because he failed to pass legislation outlawing absentee ballot drop boxes ahead of the 2020 election and hasn’t pushed for tougher consequences for voter fraud, among other things.

“Conservatism as a whole has been lethargic,” Steen said. “We lack vision, and I think that vision is coming back.”

Vos said Steen is running on hyperbole. He said Gov. Tony Evers, a Democrat, poses the real obstacle to conservatives. Evers, for example, vetoed Republican bills that would have made it harder to vote absentee.

“If we don’t get a Republican governor, (Steen) would have less success than I had,” Vos said.

Vos is one of nine GOP Wisconsin lawmakers facing primaries. Though the challengers face an uphill fight, they could push the already conservative Legislature even further right if they notch a few victories. That would mark a significant shift in a state that plays a crucial role in national elections.

Idaho voters have led the way in ousting Republican incumbents, defeating 18 GOP lawmakers — or 30% of those who sought reelection — even while choosing GOP Gov. Brad Little over a Trump-backed challenger who claimed he wasn't conservative enough. The losers included three lawmakers representing Kootenai County in northern Idaho, where a local Republican committee recommended conservative challengers against some incumbents after a lengthy vetting process.

“People have kind of had it, and they’re willing to get up and vote,” said Brent Regan, chair of the Kootenai County Republican Central Committee.

Even in some Democratic-dominated states, Republican primary voters have ousted incumbents deemed not conservative enough.

Illinois state Rep. David Welter, one of nine Republican lawmakers booted from the chamber in February for ignoring COVID-19 protocols to wear masks, lost his primary in June to a challenger who claimed Welter wasn't Republican enough. Challenger Jed Davis criticized Welter's votes for the Equal Rights Amendment and a construction bill containing a gas tax hike, among other things.

Davis also derided Welter’s connections to U.S. Rep. Adam Kinzinger of Illinois, who became a GOP outcast after voting to impeach Trump and participating in the Democratic-led House panel investigating the Jan. 6, 2021, attack on the U.S. Capitol. Welter once worked for Kinzinger’s campaign and received $32,500 in contributions since 2021 from committees associated with Kinzinger.

“People pegged me as more of a moderate,” Welter said. “I’m now going to be replaced by somebody who is really, really far to the extreme on the right.”

Welter believes redistricting after the 2020 census also played a role in his defeat by shifting the voters he represented.

In states where partisan officials controlled redistricting, such as Illinois, the maps enacted for the 2022 elections often contained “more and more extreme partisan gerrymanders,” according to a recent analysis by political scientists and data experts.

When legislative districts tilt further right or left, incumbents are more likely to face challengers, and candidates who take more extreme positions are more likely to win, according to an analysis in a forthcoming book by Saint Louis University political scientist Steven Rogers.

Wisconsin’s state legislative districts had some of the largest pro-Republican tilts among all states during the past decade and underwent only minor changes before this year’s election.

Most of the challengers there are likely to lose, said University of Wisconsin-La Crosse political scientist Anthony Chergosky. But they still could leave their mark by forcing incumbents further right to please the GOP base that votes in primaries.