INDIANAPOLIS (AP) — Thousands of people arguing the abortion issue surrounded the Indiana Statehouse and filled its corridors Monday as state lawmakers began consideration of a Republican proposal to ban nearly all abortions in the state and Vice President Kamala Harris denounced the effort during a meeting with Democratic legislators.

Harris said during a trip to Indianapolis that the abortion ban proposal reflects a health care crisis in the country. Despite the bill’s abortion ban language, anti-abortion activists lined up before a legislative committee to argue that the bill wasn’t strict enough and lacked enforcement teeth.

Indiana is one of the first Republican-run state legislatures to debate tighter abortion laws following the U.S. Supreme Court decision last month overturning Roe v. Wade. The Supreme Court ruling is expected to lead to abortion bans in roughly half the states.

“Maybe some people need to actually learn how a woman’s body works,” Harris said Monday, eliciting murmurs and laughs from the Democratic legislators. “The parameters that are being proposed mean that for the vast majority of women, by the time she realizes she is pregnant, she will effectively be prohibited from having access to reproductive health care that will allow her to choose what happens to her body.”

Confrontations erupted periodically between anti-abortion and abortion-rights demonstrators around the Indiana Statehouse. One person carrying a message on cardboard — “Forced Birth Is Violence” — followed a man, who carried a fake red fetus in a plastic bag over his shoulder, and tried to obscure his sign that read “Save Our Babies.”

Some people had virulent arguments encircled by other demonstrators

“You think you should dictate my life and my kids’ lives. That’s what you’re saying,” Kait Schultz, who wore a dark gray “Pregnant and Pissed” shirt, shouted to Christopher Monaghan.

“You don’t want to have a conversation,” Monaghan replied as they spoke over each other. He held a vertical sign that read “Babies Lives Matter.” 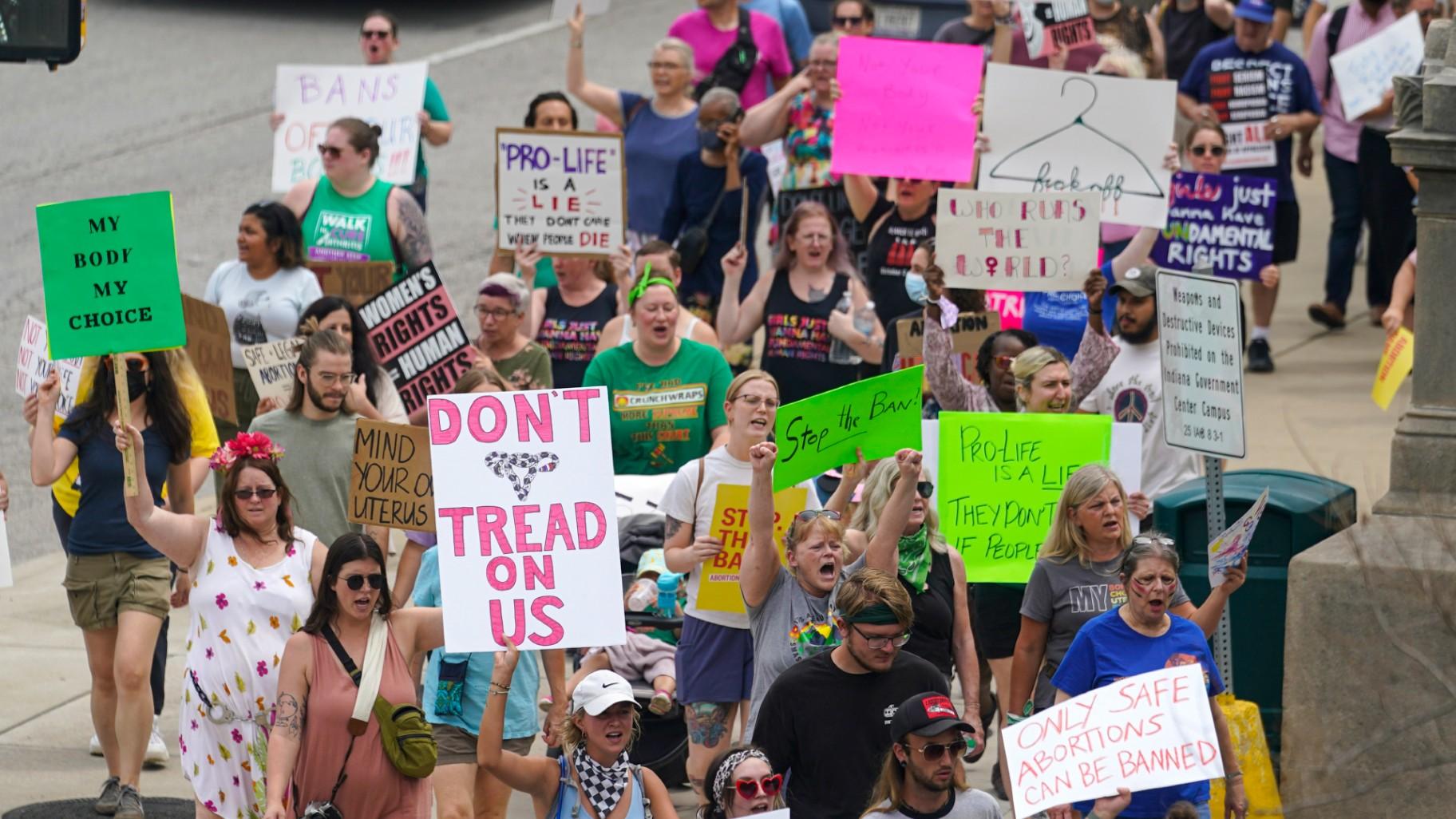 Elsewhere Monday, Lawmakers in West Virginia’s Republican majority hurried to advance legislation that would criminalize abortion with few exceptions. A bill introduced Monday makes providing an abortion a felony carrying up to 10 years in prison. It provides exceptions only in cases where there is an ectopic pregnancy, a “nonmedically viable fetus” or a medical emergency.

In his announcement, Justice asked legislators to “clarify and modernize” the state abortion laws in the wake of the Supreme Court ruling. A week ago, a Charleston judge blocked enforcement of the state’s 150-year-old abortion ban, saying the recent laws enacted by the West Virginia Legislature “hopelessly conflict with the criminal abortion ban.”

In Tennessee, meanwhile, the attorney general’s office said it’s still unknown when the state’s anti-abortion “trigger ban” will go into effect, but some state lawmakers are raising alarm that the ban has no exceptions for victims of rape or incest.

Tennessee has been limiting abortion as early as six weeks into pregnancy — when most women don’t know they’re pregnant — ever since the U.S. Supreme Court’s abortion decision last month. Republican Gov. Bill Lee refused last week to answer questions from reporters on he supported tweaking the trigger law, particularly sidestepping on whether he supported exempting children who were raped and then became pregnant.

In Wyoming, a lawsuit filed Monday by a Casper women’s health clinic and others seeks to block the state’s new abortion ban just before it’s scheduled to take effect. The lawsuit claims the new law violates the state constitution with restrictions that will discourage potentially lifesaving pregnancy healthcare in Wyoming, forcing pregnant women to go to other states for necessary procedures.

Indiana’s Republican Senate leaders proposed a bill last week that would prohibit abortions from the time an egg is implanted in a woman’s uterus with limited exceptions — in cases of rape, incest and to protect the life of the mother. The proposal followed the political firestorm over a 10-year-old rape victim who traveled to the state from neighboring Ohio to end her pregnancy.

“She is a baby,” Democratic Rep. Cherrish Pryor of Indianapolis, one of the lawmakers at the meeting with Harris, said of the child. “Why should we force babies to have babies?”

The case of the Ohio girl gained wide attention when an Indianapolis doctor said the child had to go to Indiana because Ohio banned abortions at the first detectable “fetal heartbeat” after the Supreme Court’s abortion decision.

The ultimate fate of the Indiana abortion bill in the Republican-dominated Legislature is uncertain, as leaders of Indiana Right to Life, the state’s most prominent anti-abortion group, are decrying the Senate proposal as weak and lacking enforcement provisions.

Republican Senate leaders said the bill would not add new criminal penalties against doctors involved with abortions, but they would face possibly having their medical licenses revoked for breaking the law.

Numerous anti-abortion activists argued against including the exceptions allowing abortions in cases of rape and incest.

“I don’t believe children should be murdered based on their circumstance of conception,” Emma Duell of Noblesville told the Senate committee. “What happened the night they were conceived, something they have no control over should not affect whether they are protected from abortion violence or not.”

Republican Sen. Sue Glick, the abortion ban bill’s sponsor, said she expected amendments would be considered tightening the exceptions before the Senate’s anticipated vote on the proposal later this week.

Representatives of several physician groups raised concerns about the Indiana proposal possibly being questioned and prosecuted over their medical decisions.

Ariel Ream of Indianapolis said she was undergoing fertility treatments and worried that the abortion ban could leave her health threatened if she were to have a miscarriage and face bleeding.

“When am I hemorrhaging enough to be able to get care?” Ream said. “We don’t know if you go to the ER that doctor’s going to be scared enough to put their license on the line for me.”