Mayor Lori Lightfoot dropped deep into the pocket and launched a Hail Mary pass on Monday to keep the Chicago Bears at Soldier Field by unveiling plans to put a dome over the lakefront stadium while expanding its seating capacity — funded, in part, by Chicago taxpayers.

Lightfoot unveiled three options to renovate Soldier Field, ranging in price from $900 million to $2.2 billion. The mayor, who is running for a second term, declined to say how much public funding she was prepared to spend to prevent the Bears from leaving the city and moving to Arlington Heights.

Team officials announced in September the storied franchise had reached an agreement to buy the former Arlington International Racecourse property for $197.2 million. After Lightfoot unveiled her administration’s plans for the stadium, a team spokesperson gave no indication Bears officials had any intention of rethinking their plan to head for Arlington Heights and the city’s northwest suburbs.

Lightfoot vowed to make Soldier Field a “year-round destination.” The first proposal would put a dome over the stadium, the second would prepare the stadium for a dome while the third would be tailored for soccer, she said.

“We are doing what we believe is making a compelling case for the Chicago Bears to stay in Chicago,” Lightfoot said. “They want a tier one stadium environment to maximize revenues — and we agree. And we are going to keep making the case to the Bears, the NFL and the public that a revitalized Solider Field makes the most economic sense for that storied franchise.” 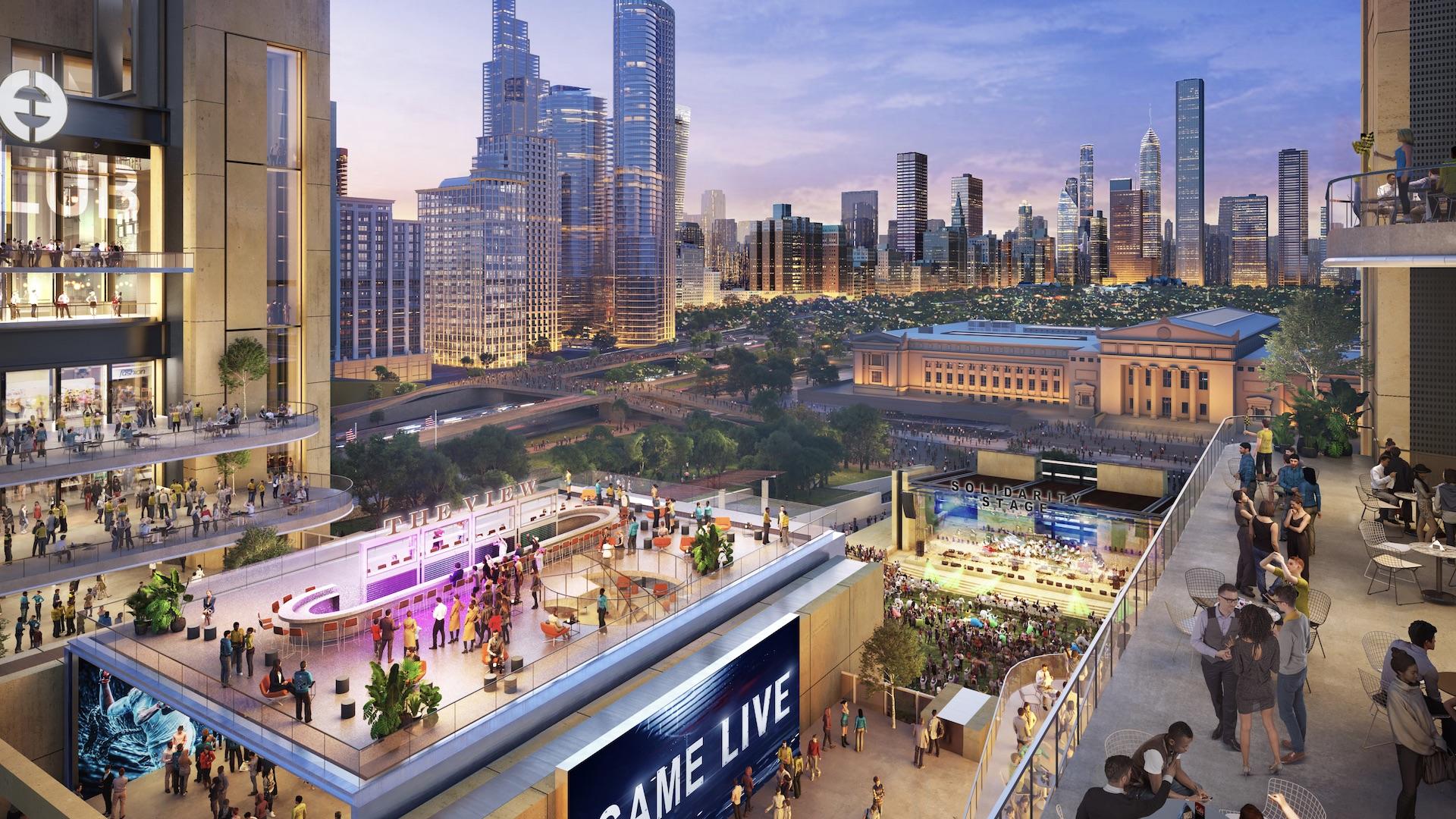 The city’s proposal would expand the stadium’s seating capacity from 61,500 seats up to 70,000 “total seats including additional fan activation areas” and add seven suites, according to the mayor’s office. The plan would also make it easier to get to Soldier Field via public transportation with shuttles and trams.

But while Lightfoot attempted to woo the Bears back to their home of nearly 51 years, she left no doubt her administration was prepared to confront a future without the football team. Lightfoot said the city had already begun negotiations with other potential tenants of the stadium, which is operated by the Chicago Park District. The team’s lease expires in 2033.

Lightfoot’s blitz defense of the home of the city’s once mighty but more recently mediocre football team could also help her divert responsibility if the team eventually defects to the suburbs. The team is set to close on its deal in Arlington Heights just as she faces voters in February.

“Whether the Bears stay, and I hope they do, but even if they don’t, we’re going to generate a massive amount of revenue and financial impact for our city,” Lightfoot said.

The mayor declined to offer a timeline on when plans for a renovated Soldier Field would be finalized and how much those plans would cost Chicago taxpayers. The plans suggest inking a naming rights deal that could bring in tens of millions of dollars, while keeping the Soldier Field name in some form to continue to pay tribute to Chicago’s veterans.

Solider Field opened in 1924, and was last renovated in 2003 under a plan approved by former Mayor Richard M. Daley after the last time the Bears threatened to leave the city. That project was funded with $660 million in bonds that are being paid off with taxes paid by city hotels.

In February, approximately $415 million of that debt — which is not scheduled to be retired until 2023 — remained on the books of the Illinois Sports Facilities Authority, according to a report in the online publication Bond Buyer. 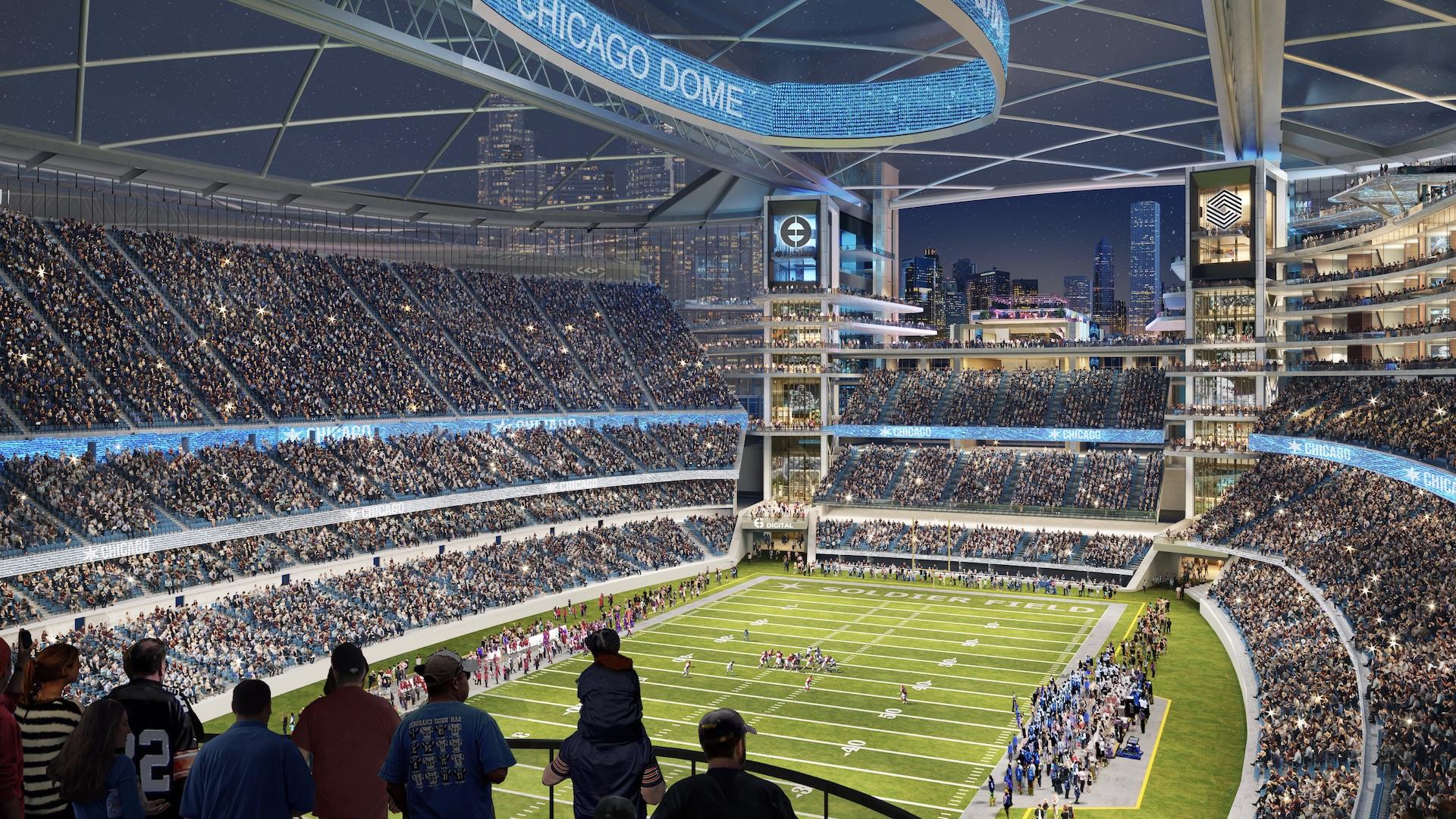 Lightfoot declined to respond to a question about the wisdom of launching a new taxpayer-funded renovation of Solider Field when the last one has yet to be paid off, saying only that any deal would be “smart” and must win the support of the public.

“We will make a very compelling case that any investment made of precious tax dollars will have a substantial return on that investment that makes sense for the taxpayers,” Lightfoot said.

Lightfoot’s announcement came nearly three weeks after a working group released its plan for the future of the Museum Campus, which the city sees as an essential destination for tourists and a hub for residents.

If Lightfoot moves forward with plans to build a dome over Solider Field, it could invite a legal challenge over the city’s Lakefront Protection Ordinance, which does not allow “further private development be permitted east of Lake Shore Drive.”

Watchdog group Friends of the Parks used that ordinance to sue the city when former Mayor Rahm Emanuel proposed building the Lucas Museum in what is now a parking lot near Soldier Field. After the group won an initial round in court, Star Wars creator George Lucas dropped his plans in 2016 and built the museum in Los Angeles.

Juanita Irizarry, executive director of Friends of the Parks, was a member of the working group that re-envisioned the Museum Campus — but she says she was not invited to weigh in on the future of the stadium.

“Because we were not privy to any renderings, engineering specifications, or other details beyond what is printed in the [mayor’s] report, we cannot be sure whether what the mayor is now trying to sell will pass muster against legal limitations to building on Chicago’s protected lakefront,” Irizarry said in a statement. “But we had heard rumblings that some members of the working group were studying ways to get around the Lakefront Protection Ordinance.”

Irizarry said it may make sense to renovate the stadium’s interior, but during the meetings of the working group she “reminded people about our willingness to sue.”

“As to significant changes to the footprint of the building or a dome, we will be studying legal options,” Irizarry said.

However, there is no indication that Bears officials will even attempt to haul in Lightfoot’s pitch, with a team spokesperson referring reporters to a July 7 statement that said the team was legally prohibited from negotiating over plans to revitalize Solider Field.

“The only potential project the Chicago Bears are exploring for a new stadium development is Arlington Park,” according to the statement.

Lightfoot appeared undaunted by that cool reception, and warned that the team’s fan base may not be willing to travel 27 miles northwest of the city along the Kennedy Expressway to Arlington Heights. Team officials would be “foolish” not to consider the city’s plan, which offers the answer to the team’s problems, Lightfoot said.

“I feel very confident that, hopefully, the Bears will see there is an overwhelmingly compelling financial case for them to stay in Chicago, particularly given the delta between making the investment here at this stadium and what the costs are, in today’s dollars, on building a brand new stadium from scratch,” she said. “It is not even a close call, particularly when you think about the challenges of getting financing done in this state.”

Lightfoot even suggested that another NFL team may be interested in moving to Soldier Field. However, NFL regulations would give the Bears leadership the right to veto another team’s plan to move into its territory. 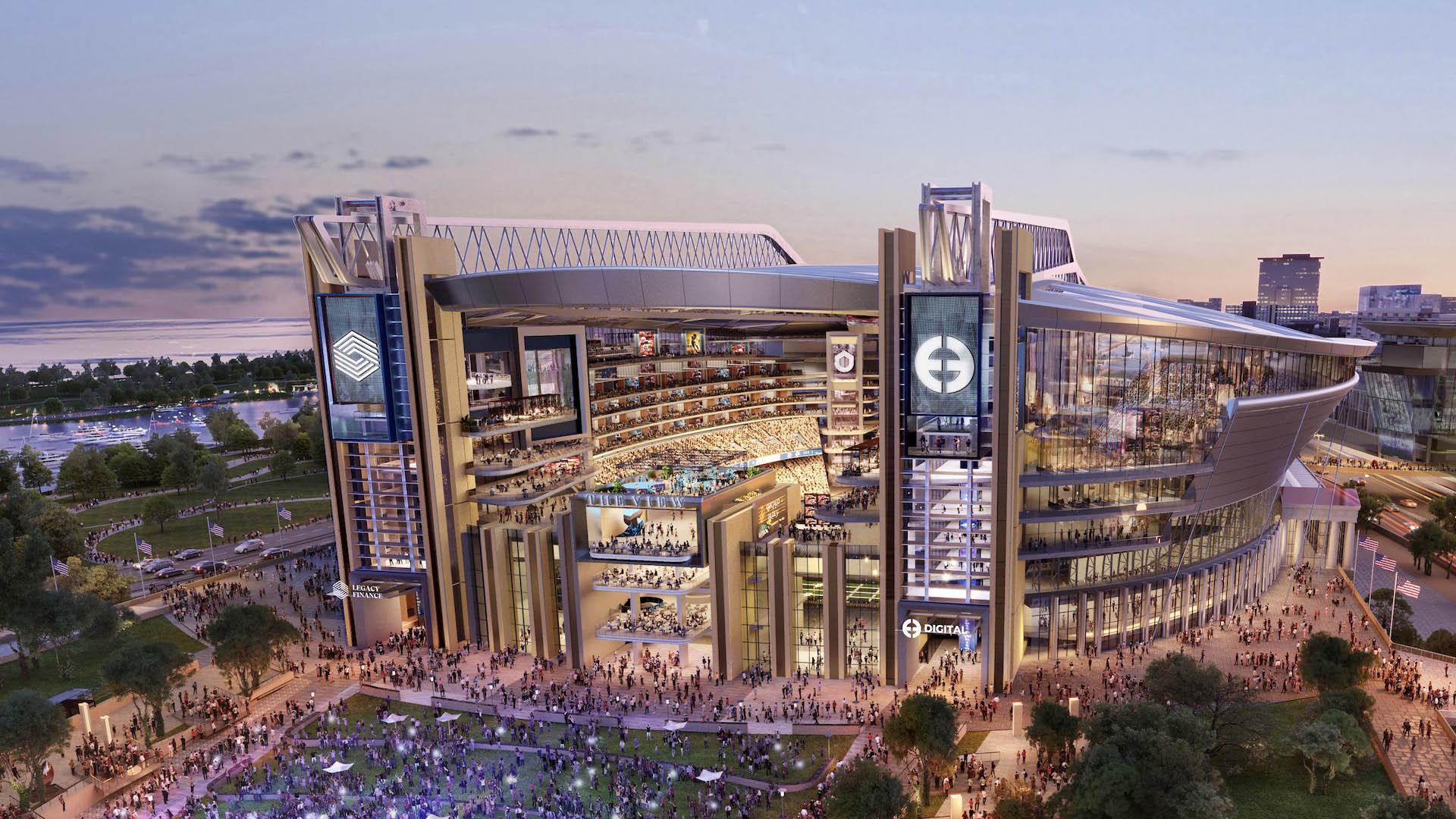