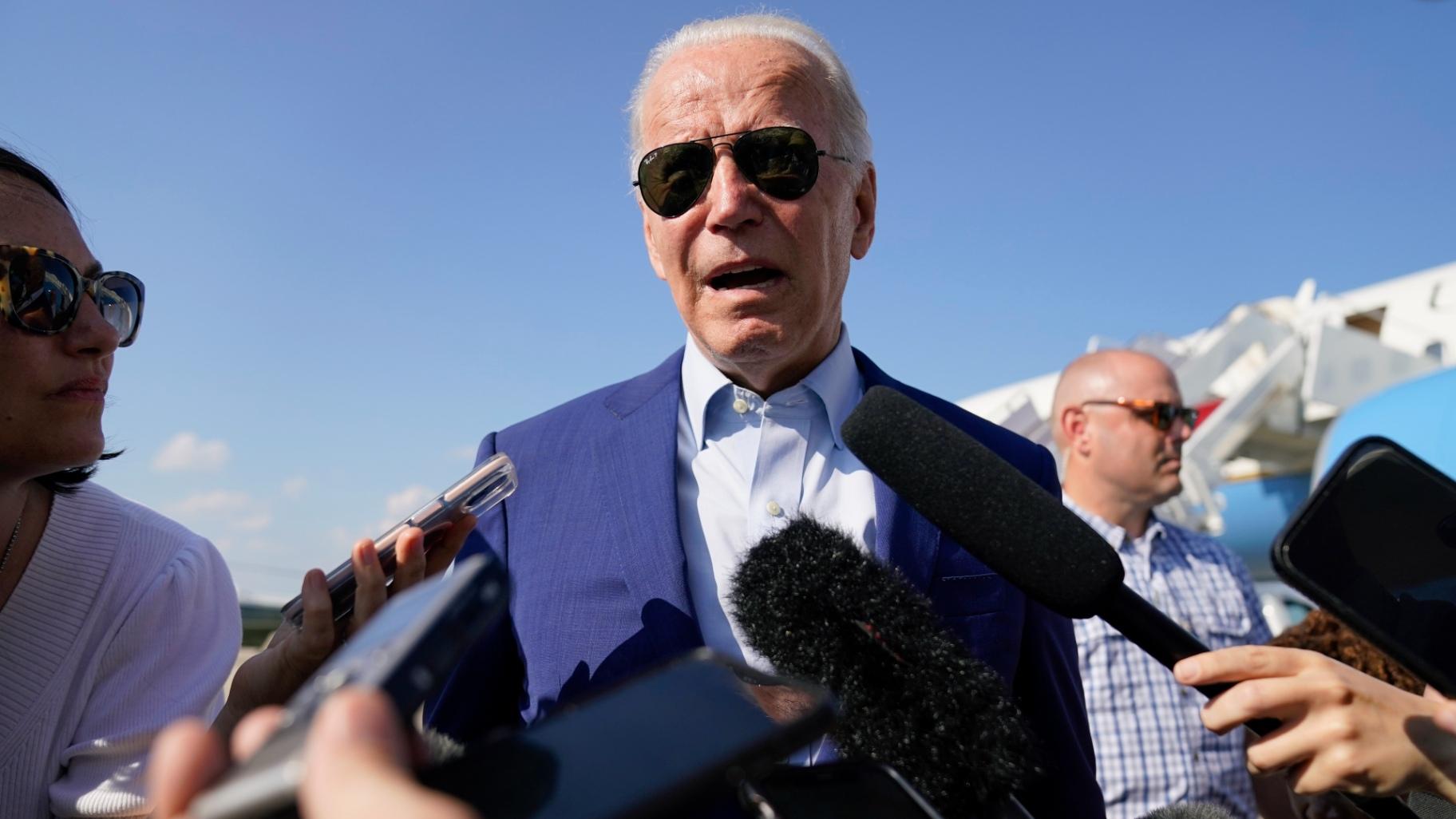 WASHINGTON (AP) — President Joe Biden tested positive for COVID-19 on Thursday and is experiencing “very mild symptoms,” the White House said, as new variants of the highly contagious virus are challenging the nation’s efforts to resume normalcy after two and a half years of pandemic disruptions.

The White House released a letter from Biden’s physician, Dr. Kevin O’Connor, that said the president has a runny nose and “fatigue, with an occasional dry cough, which started yesterday evening.”

Biden, 79, is fully vaccinated, after getting two doses of the Pfizer coronavirus vaccine shortly before taking office, a first booster shot in September and an additional dose March 30.

O’Connor wrote in his letter about the president’s treatment plan: “I anticipate that he will respond favorably” to Paxlovid “as most maximally protected patients do.”

Jean-Pierre said Biden had last tested negative on Tuesday, and he will stay isolated until he tests negative again. Biden had planned to visit Pennsylvania on Thursday to talk about his crime prevention plans and attend a Democratic fundraiser, and then spend a long weekend in Delaware. His appearances and travel are canceled.

First lady Jill Biden spoke to reporters as she arrived at a school in Detroit on Thursday, telling them she had just gotten off the phone with her husband.

The first lady, who was wearing a mask, said she tested negative earlier in the day. She will keep her full schedule in Michigan and Georgia on Thursday, though she will be following guidance from the Centers for Disease Control and Prevention on masking and distancing, said Michael LaRosa, her spokesperson.

The president spent much of last week in Israel and Saudi Arabia. White House officials told reporters that Biden planned to minimize contact during the trip, yet as soon as he exited Air Force One on Wednesday July 13 the president was fist-bumping, handshaking and even seen in the occasional hug.

Biden had a minimal public schedule after returning from Saudi Arabia late on Saturday night, attending church the next day and appearing at a White House visit by Ukraine’s first lady Olena Zelenska on Tuesday. The president traveled to Massachusetts on Wednesday to promote efforts to combat climate change.

Up to this point, Biden’s ability to avoid the virus seemed to defy the odds, even with the testing procedures in place for those expected to be in close contact with him. Prior waves of the virus swept through Washington’s political class, infecting Vice President Kamala Harris, Cabinet members, White House staffers and lawmakers. Biden has increasingly stepped up his travel schedule and resumed holding large indoor events where not everyone is tested.

A White House official said Harris tested negative for COVID-19. She was last with the president on Tuesday and spoke with him on the phone Thursday morning. Harris plans to remain masked on the guidance of the White House medical team.

House Speaker Nancy Pelosi said she hoped that Biden’s positive test for the virus would cause more Americans to get vaccinated and boosted because “none of us is immune from it, including the president of the United States, and we really have to be careful.”

Top White House officials in recent months have been matter-of-fact about the likelihood of the president getting COVID, a measure of how engrained the virus has become in society — and of its diminished threat for those who are up to date on their vaccinations and with access to treatments.

When administered within five days of symptoms appearing, Paxlovid, produced by drugmaker Pfizer, has been proven to bring about a 90% reduction in hospitalizations and deaths among patients most likely to get severe disease.

In an April 30 speech to more than 2,600 attendees at the White House Correspondents’ Association dinner, Biden acknowledged the risks of attending large events, but said it was worthwhile to attend.

“I know there are questions about whether we should gather here tonight because of COVID,” he said. “Well, we’re here to show the country that we’re getting through this pandemic.”

Biden is far from the first world leader — and not the first U.S. president — to get the coronavirus, which has infected British Prime Minister Boris Johnson, French President Emmanuel Macron and more than a dozen other leaders and high-ranking officials globally.

When Biden’s predecessor, President Donald Trump, contracted the disease in October 2020, it was a far different time. Vaccines were not available and treatment options were limited and less advanced. After being diagnosed with COVID-19 at the White House, Trump was given an experimental antibody treatment and steroids after his blood oxygen levels fell dangerously low. He was hospitalized at Walter Reed National Military Medical Center for three days

After more than two years and over a million deaths in the U.S., the virus is still killing an average of 353 people a day in the U.S., according to the Centers for Disease Control and Prevention. The unvaccinated are at far greater risk, more than two times more likely to test positive and nine times more likely to die from the virus than those who have received at least a primary dose of the vaccines, according to the public health agency.

The highly transmissible omicron variant is the dominant strain in the U.S., but scientists say it poses a lower risk for severe illness to those who are up to date on their vaccinations. Omicron’s BA.5 sub-strain, believed to be even more contagious, now makes up more than 65% of U.S. cases.

The coronavirus pandemic helped put Biden in the White House, as he pledged to handle COVID-19 better than his predecessor. After initial months of success surging the nation’s supply and availability of vaccines, the virus became a morass for the Democrat in the first year of his presidency, as he struggled to boost the country’s vaccination rate and to stay ahead of the unpredictable disease.

As cases sharply declined earlier this year, Biden highlighted his administration’s efforts to end the pandemic and help the nation regain a sense of normalcy. He said in his March 1 State of the Union address, “It’s time for Americans to get back to work and fill our great downtowns again.”

The White House has sought to go above and beyond public health guidelines to protect the president, with all visitors and staff, required to attest to their vaccination status or submit to daily tests. Additionally, people expected to be in close proximity to Biden are tested daily.

Still, Biden has increasingly demonstrated a willingness to participate in larger, indoor events in recent months — riskier activities for contracting the virus — and many have had people not wearing masks. White House officials say Biden was intent on showing he can fulfill his presidential responsibilities without fear of the virus, believing he was well protected against severe outcomes.