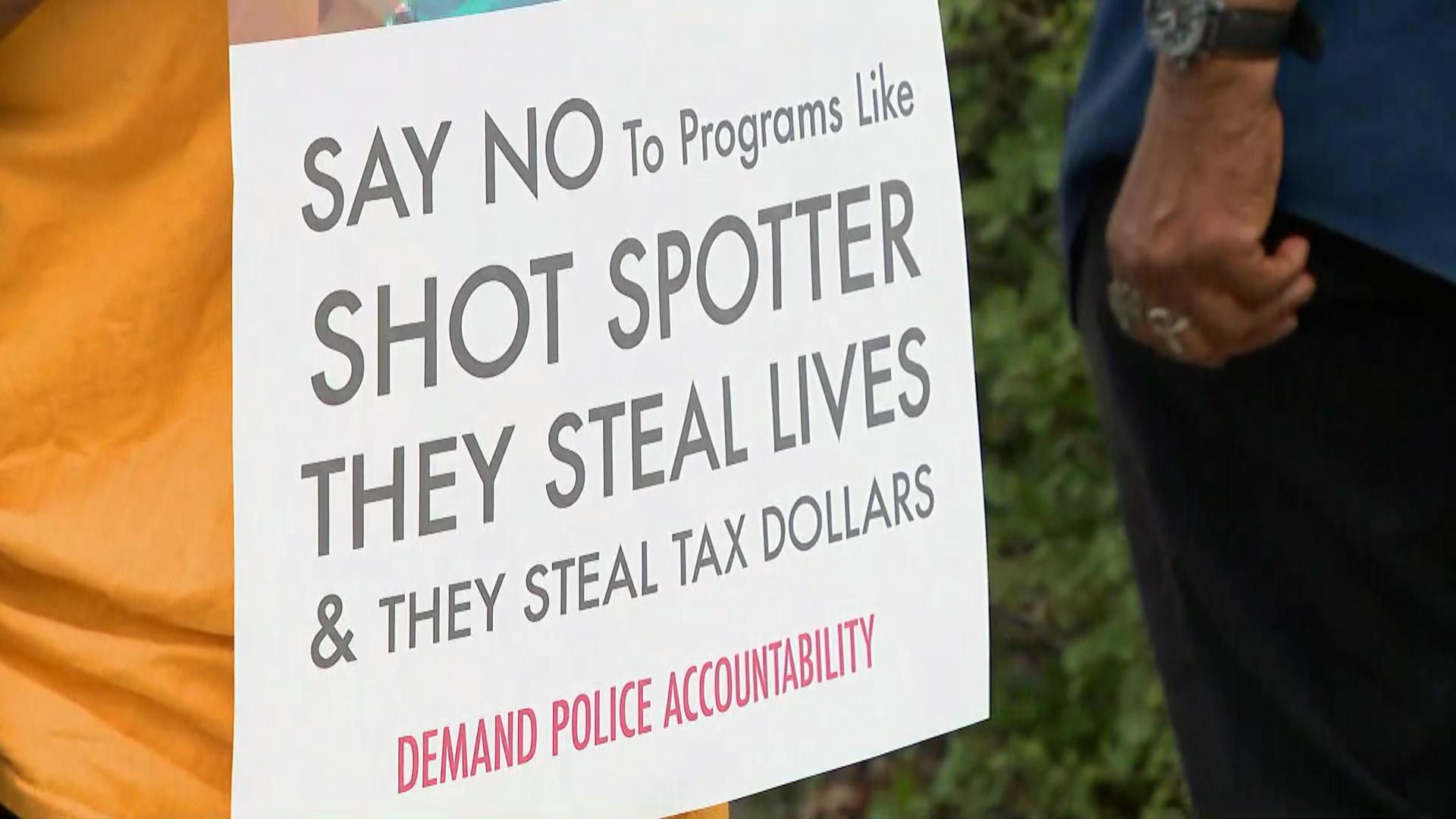 Activists called on Chicago to drop its contract with ShotSpotter during a protest on Aug. 19, 2021. (WTTW News)

Chicago’s continued use of ShotSpotter technology has resulted in “grave and systematic” rights violations for local residents, including two men who were falsely accused of crimes based on unfounded alerts, a new lawsuit alleges.

Attorneys with Northwestern University’s MacArthur Justice Center on Thursday filed a federal lawsuit against the city of Chicago, Police Superintendent David Brown and several officers, seeking to end the city’s use of the “unconstitutional and discriminatory” ShotSpotter technology, which attempts to identify gunfire and direct law enforcement to its location.

“The city’s reliance on ShotSpotter results in a misallocation of municipal resources to the detriment of the people who live under ShotSpotter’s footprint,” attorneys wrote in a 103-page complaint filed Thursday. “ShotSpotter inflates gunfire statistics, thereby providing false justification for oppressive police tactics in neighborhoods under its surveillance — all of which are already overpoliced.”

The city’s Law Department on Thursday said it had not yet been served with the complaint. Though it was not named as a defendant in the lawsuit, ShotSpotter defended its technology in a statement to WTTW News, saying it has a “97% aggregate accuracy rate for real-time detections across all customers that has been independently verified by Edgeworth Analytics.”

The Associated Press first reported on the lawsuit, which was filed on behalf of Michael Williams and Daniel Ortiz, two men who were allegedly falsely arrested, in part, due to ShotSpotter alerts.

Williams, 65, was accused of murder and spent 11 months in Cook County Jail because officers “intentionally and improperly” relied on a ShotSpotter alert, the suit states.

According to the complaint, Williams was driving in Chicago in May 2020, when 25-year-old Safarian Herring flagged him down for a ride. Williams picked him up, but during the ride, Herring was fatally shot through the open window of Williams’ vehicle.

Weeks later, when police wanted to question him, he voluntarily went with them, the complaint states, but he was arrested for the shooting because a “faulty” ShotSpotter alert reported that the fatal shot had been fired from inside Williams’ vehicle.

Still, Williams spent nearly a year in jail, where he contracted COVID-19 twice, according to the complaint, before Cook County prosecutors dropped the ShotSpotter evidence and dismissed the charges against him.

In Ortiz’s case, he was allegedly standing outside a laundromat on Chicago’s Northwest Side in April 2021 when he was arrested by two police officers. According to the complaint, the officers were responding to a ShotSpotter alert in the area and immediately detained Ortiz — even though there had been no gunshot and no other evidence to corroborate the alert.

Ortiz was jailed for one night, but charges were dismissed the next day.

“CPD’s illegal stop of Mr. Ortiz is not unique,” the complaint states, “it is emblematic of a systematic pattern of illegal ShotSpotter stops in the City of Chicago.”

Local activists have called on Chicago to dump ShotSpotter, claiming it is unreliable and can lead to police being sent into communities on “high alert” for false alarms.

Previous reporting from the Associated Press identified “a number of serious flaws” in the ShotSpotter technology, alleging it can miss live gunfire right under its microphones, or misclassify the sounds of fireworks or cars backfiring as gunshots.

The complaint states Chicago spends $9 million on the technology each year — which is disproportionately deployed in South and West side communities — even though a report from the city’s Inspector General in 2021 found that police reported finding an actual gun-related incident in just 9.1% of ShotSpotter alerts.

“Put differently,” the complaint states, “nearly 91% of ShotSpotter alerts turned up no reported evidence of a gun-related crime.”