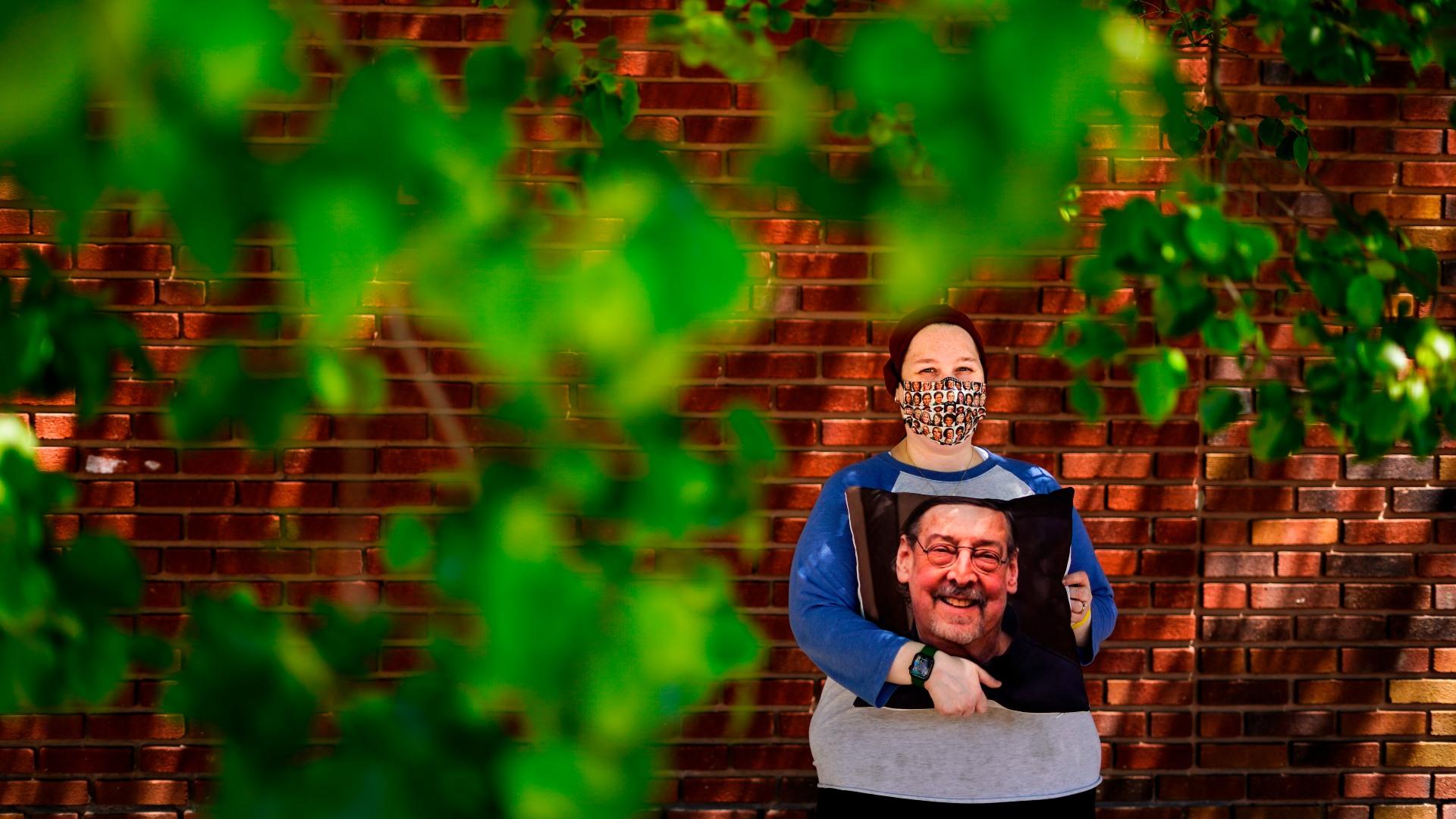 Sara Atkins poses for a photo, in Wynnewood, Pa., Tuesday, May 10, 2022, while holding a pillow with an image of her father Andy Rotman-Zaid, who died of COVID-19 in December 2020. She channels her grief into fighting for global vaccination and better access to health care to honor her father. (AP Photo / Matt Rourke)

The U.S. death toll from COVID-19 hit 1 million on Monday, a once-unimaginable figure that only hints at the multitudes of loved ones and friends staggered by grief and frustration.

The confirmed number of dead is equivalent to a 9/11 attack every day for 336 days. It is roughly equal to how many Americans died in the Civil War and World War II combined. It’s as if Boston and Pittsburgh were wiped out.

“It is hard to imagine a million people plucked from this earth,” said Jennifer Nuzzo, who leads a new pandemic center at the Brown University School of Public Health in Providence, Rhode Island. “It’s still happening and we are letting it happen.”

Some of those left behind say they cannot return to normal. They replay their loved ones’ voicemail messages. Or watch old videos to see them dance. When other people say they are done with the virus, they bristle with anger or ache in silence.

Three out of every four deaths were people 65 and older. More men died than women. White people made up most of the deaths overall. But Black, Hispanic and Native American people have been roughly twice as likely to die from COVID-19 as their white counterparts.

Most deaths happened in urban areas, but rural places — where opposition to masks and vaccinations tends to run high — paid a heavy price at times.

The death toll less than 2 1/2 years into the outbreak is based on death certificate data compiled by the Centers for Disease Control and Prevention’s National Center for Health Statistics. But the real number of lives lost to COVID-19, either directly or indirectly, as a result the disruption of the health care system in the world’s richest country, is believed to be far higher.

The U.S. has the highest reported COVID-19 death toll of any country, though health experts have long suspected that the real number of deaths in places such as India, Brazil and Russia are higher than the official figures.

The milestone comes more than three months after the U.S. reached 900,000 dead. The pace has slowed since a harrowing winter surge fueled by the omicron variant.

The largest bell at Washington National Cathedral in the nation’s capital tolled 1,000 times a week ago, once for every 1,000 deaths. President Joe Biden on Thursday ordered flags lowered to half-staff and called each life “an irreplaceable loss.”

“As a nation, we must not grow numb to such sorrow,” he said in a statement. “To heal, we must remember.”

More than half the deaths occurred since vaccines became available in December of 2020. Two-thirds of Americans are fully vaccinated, and nearly half of them have had at least one booster dose. But demand for the vaccine has plummeted, and the campaign to put shots in arms has been plagued by misinformation, distrust and political polarization.

Unvaccinated people have a 10 times greater risk of dying of COVID-19 than the fully vaccinated, according to the CDC.

“To me, that is what is just so particularly heartbreaking,” Nuzzo said. Vaccines are safe and greatly reduce the likelihood of severe illness, she said. They “largely take the possibility of death off the table.”

Angelina Proia, 36, of New York, lost her father to COVID-19 in April 2020. She runs a support group for grieving families on Facebook and has seen it divided over vaccinations. She has booted people from the group for spreading misinformation.

Sara Atkins, 42, of Wynnewood, Pennsylvania, channels her grief into fighting for global vaccination and better access to health care to honor her father, Andy Rotman-Zaid, who died of COVID-19 in December 2020.

“My father gave me marching orders to end it and make sure it doesn’t happen again,” Atkins said of the pandemic. “He told me, ‘Politicize the hell out of my death if I die of this.’”

Julie Wallace and her husband, Lewis Dunlap, had cellphone numbers one digit apart. She continues paying to keep his number. She calls it just to hear his voice.

“It’s just so important to hear that sometimes,” she said. “It gives you a little bit of reassurance while also tearing your heart out.”

Some have offered solace in poetry. In Philadelphia, poet and social worker Trapeta Mayson, created a 24-hour poetry hotline called Healing Verse. Traffic to the Academy of American Poets’ poets.org website rose during the pandemic.

Brian Sonia-Wallace, poet laureate of West Hollywood, California, has traveled the country writing poems for hire. He imagines a memorial of a million poems, written by people who don’t normally write poetry. They would talk to those who are grieving and listen for points of connection.

“What we need as a nation is empathy,” said Tanya Alves, 35, of Weston, Florida, who lost her 24-year-old sister to COVID-19 in October. “Over two years into the pandemic, with all the cases and lives lost, we should be more compassionate and respectful when talking about COVID. Thousands of families changed forever. This virus is not just a cold.”