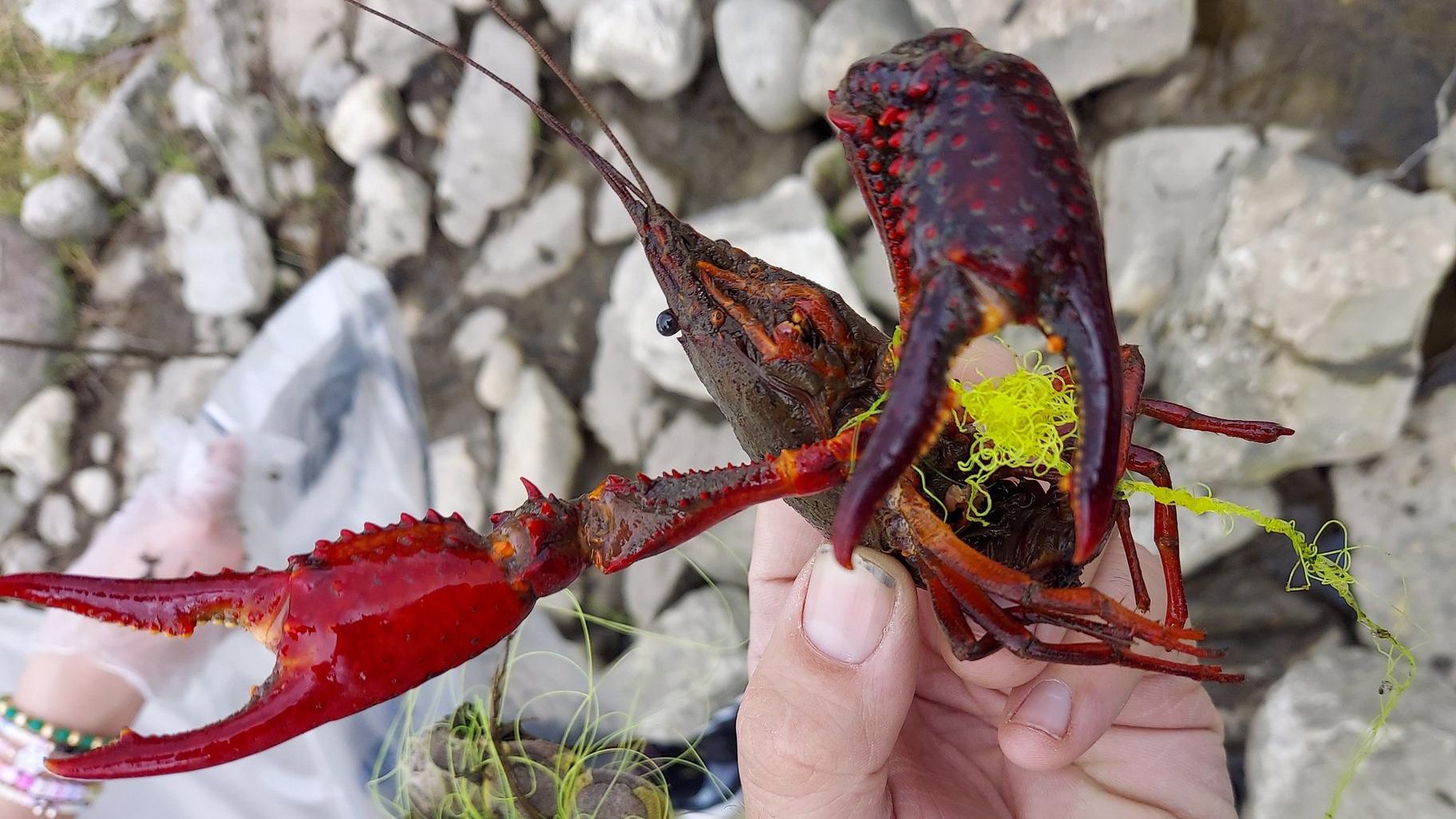 Red swamp crayfish pulled from the Chicago River during May 15 cleanup. (Twitter / @Bates-Jefferys)

A record-setting 2,000 volunteers turned up at 77 sites on Saturday for the 30th annual Chicago River Day cleanup, picking up untold pounds of trash.

“There’s been so much interest in the health of the river, people came out of the woodwork,” said Margaret Frisbie, executive director of Friends of the Chicago River, organizer of the event. “I think it’s tied to a new realization that we have to take care of our natural resources.”

Thanks in no small part to the advocacy of organizations like Friends of the River, gone are the days when the waterway was treated as a dump and volunteers would fish out tires and shopping carts during the yearly cleanup. While an abandoned bike and flat screen TV were among the weekend’s curiosities, such big ticket items have become the exception, not the rule. Much of the garbage now is linked to food waste, be it wrappers, cans or other containers, Frisbie said. 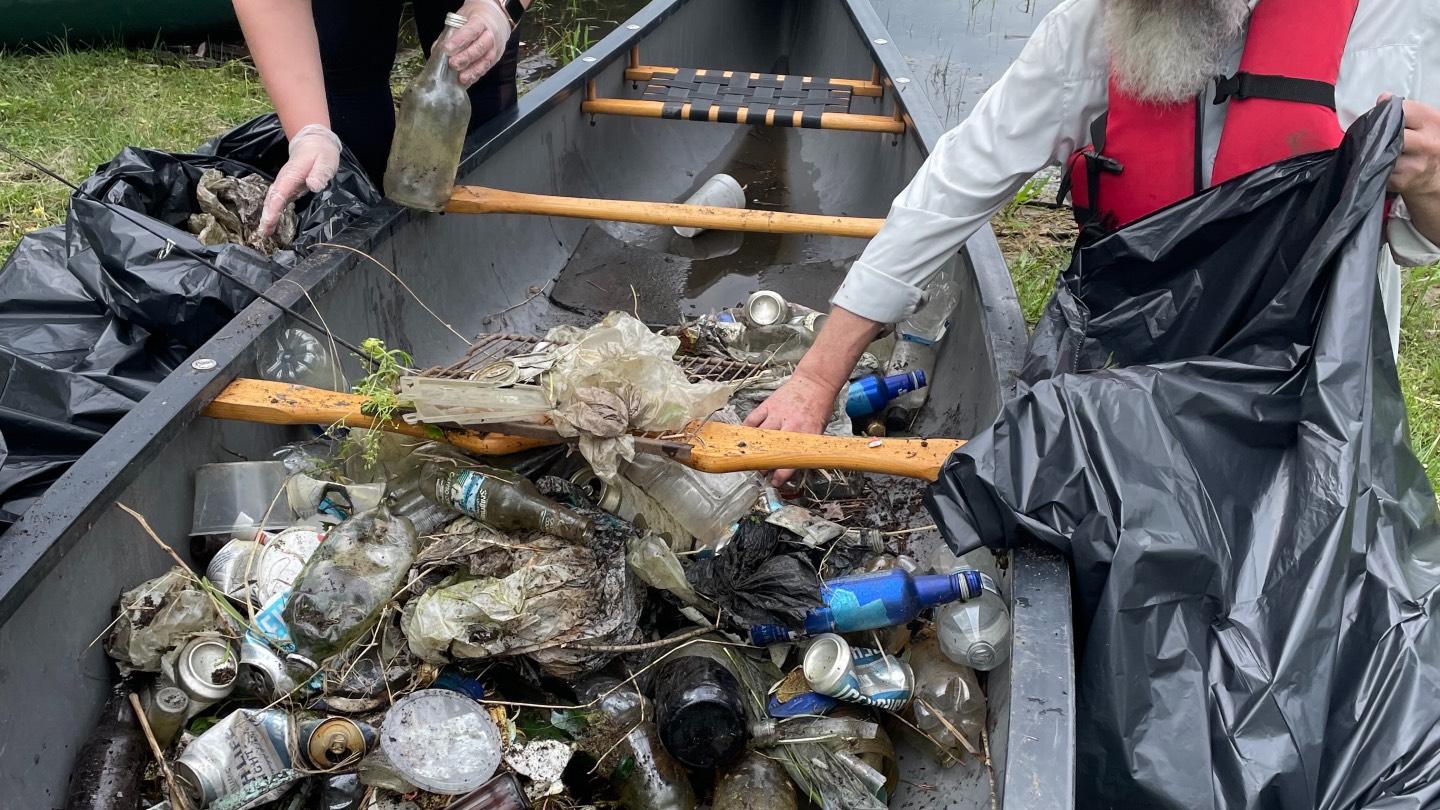 But an unusual haul by the crew assigned to River Park, located where the North Branch and North Branch Channel converge, highlights an issue that, as the amount of litter lessens, is becoming a growing concern for conservationists.

The volunteers who pulled this crayfish from the water celebrated as they freed it from a tangle of fishing line.

River Day got 2 claws up (way up once we removed the fishing line) at River Park. pic.twitter.com/xtORNs3r4U

The red swamp crayfish, aka Louisiana crawfish, might be popular on menus, but it doesn’t belong in the Chicago River.

Reuben Keller, assistant professor of environmental science at Loyola University Chicago, is leading a team that, since 2015, has been working to if not eradicate then at least reduce the red swamp population in the river.

The stretch of the channel from River Park north, all the way up to Wilmette in some cases, is thickest with the crayfish, possibly because of warmer water temperatures, Keller told WTTW News.

“We have set a couple hundred traps around River Park. We’re pulling out thousands per year,” he said.

There’s a reason the red swamp is the most cultivated species of crayfish. “It grows very, very quickly and it’s difficult to kill,” Keller explained. “It’s very tolerant of poor water quality. You can put it in a big bag and as long as it stays wet, you can ship it around the world.”

Though Keller’s research lab is still in the early phases of studying the red swamp’s impact on the Chicago River, its damage elsewhere is well documented, he said.

Unlike other crayfish, the red swamp are burrowers, a process that’s destructive in rice paddies and can undermine levees and earthen dams. The worry in Chicago would be that, in large enough numbers, the burrowing crayfish could destabilize the river’s banks — banks that in some sections have just been restored after years of work and much expense.

The crayfish also are voracious eaters, chowing on near shore plants — the kind of vegetation small fish like for hiding holes — and preying on slow moving creatures like snails.

“It’s a safe assumption they have an impact on the food web,” said Keller.

How red swamp crayfish entered the Chicago River system is anyone’s guess. Ballast water is a common culprit elsewhere when it comes to this globally opportunistic species, but it’s “pretty unlikely” to have been the case in Chicago, Keller said.

More plausible explanations: The crayfish were being used as bait and wriggled away, or they could have been leftovers carelessly cast into the water (see above, re: food waste). There are infested ponds in Michigan, Keller said, where a nearby golf course not coincidentally used to host annual crayfish boils.

Another theory is that the crayfish were unwittingly released after outlasting their usefulness as classroom pets. Keller witnessed this first-hand at his own daughter’s Evanston school, where, given his unique expertise, he was able to intervene.

“I talked to the teacher — yes, I’m ‘that’ parent — and said, ‘This is what you do at the end, you put it in the freezer,’” Keller recalled. The crayfish can’t withstand the cold temperatures and shut down, he explained.

But when push came to shove, the teacher lost her nerve and called Keller in at the end of the school year to fetch the crayfish and do the deed himself. After “so many negotiations” with his daughter, the crayfish were iced.

“From that experience, you can see where you’ve got dozens of other classrooms where teachers say, ‘Who wants to take one home?’ And then they get released,” he said.

Educating the public and preventing further spread is critical to containing the red swamp crayfish, he said. It might be in the North Shore Channel now, but it can’t get anywhere else without help, and that means making sure people don’t catch them, use them as bait in other rivers or ponds, or otherwise dump them.

Anyone spotting red swamp crayfish in the river — especially south of their stronghold in the North Branch Channel — should contact the Illinois Department of Natural Resources.

For Frisbie, whether battling invasive crayfish or litter, the work is the same: Continuously increasing the health of the Chicago River and its banks in support of native wildlife and habitat.

On Monday, she spoke with WTTW News from a canoe in Skokie Lagoons, surrounded by turtles and her count of great blue heron sightings up to 15. That’s the vision conservationists have for the entire Chicago River system.

“It’s a real shift in understanding,” she said, and one that advocates will continue to press with officials.

The latest challenge is Mayor Lori Lightfoot’s casino pick — the proposed Bally’s site directly on the Chicago River. Shedd Aquarium’s “wild mile” of floating habitat is nearby and an elusive river otter has been spotted in the vicinity.

“It should be the greenest casino in the world,” Frisbie argued.