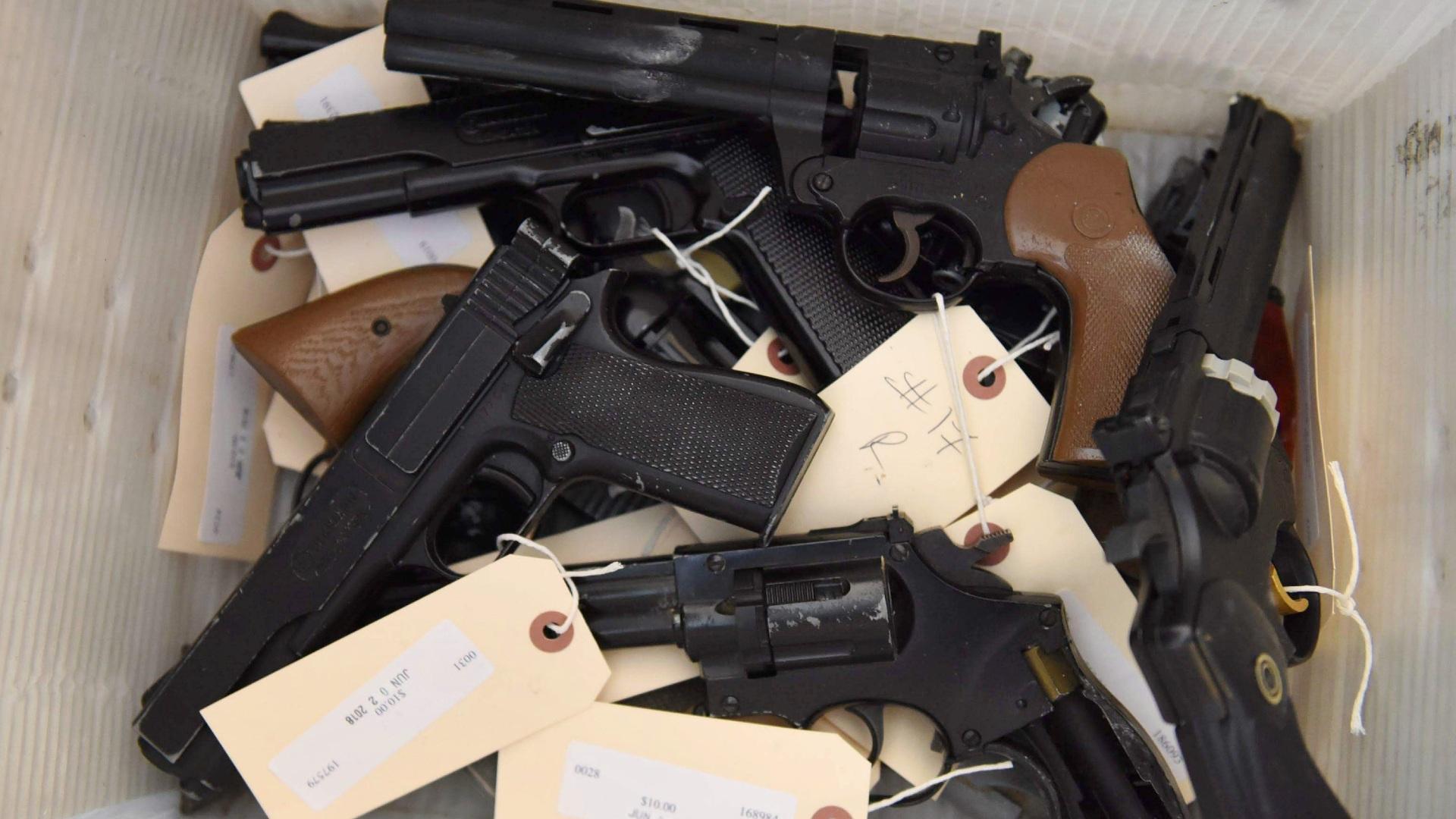 Chicago Mayor Lori Lightfoot said the gun buyback program would get “guns out of the hands of dangerous people.” (Chicago Police Department / AP)

(CNN) -- Chicago officials launched a fundraising campaign to support the city’s largest ever gun buyback program, with the goal of raising $1 million to entice people to turn in guns during two large events this year.

Mayor Lori Lightfoot called it a “bold new initiative” and said it would get “guns out of the hands of dangerous people.” Chicago and other cities have been running these programs for decades, often trading gift cards of $100 or so for guns and some lesser amount for replica guns.

Chicago officials annually take in hundreds of guns through buyback programs. But decades of research shows such programs don’t reduce gun violence, in large part because they don’t result in guns being taken from people who aren’t supposed to have them. One recent study found “no evidence that (gun buyback programs) reduce suicides or homicides where a firearm was involved.”

These types of programs are common in cities across America, and Chicago’s goal is ambitious compared to other programs. Long Beach, California, police took in 280 guns at an event in September. More than 250 were turned in at an event last summer in Desoto, Texas. Police in Albany, Georgia, collected 40 this way last spring.

“It’s good theater. But it’s not helping deal with gangs and drug dealers and everyone else using the guns,” said Joseph Giacalone, retired NYPD sergeant and current professor at John Jay College.

“These things are dog-and-pony shows ... Look, a million dollars to do all this stuff, it’s not going to help violence in Chicago or anywhere else one iota. It’s feel-good, it’s to make it look like politicians are going to do something, but it means absolutely nothing.”

‘An additive benefit shouldn’t be discounted’

Chicago records more murders each year than any other city in America (despite New York and Los Angeles both having significantly more people), and recorded more than 800 homicides in 2021 for the first time in 25 years, and its police department also takes more guns through enforcement than any other city. Violent crime is likely to play a role in the next mayoral election – already one challenger has cited public safety as the most important issue.

In announcing the program, the Chicago Mayor’s Office said it “will empower residents with the necessary tools to build a safer city for us all” by “getting guns out of the hands of dangerous people.”

And when the goal is community engagement or awareness – when the goal isn’t violent crime reduction – the programs can have some benefit. Notably, taking guns out of homes where the owner doesn’t want them and giving people an incentive to take them out of circulation.

“The gun turn-in really is a way for people to have a solid connection to the city. They know (the gun is) deadly, know they’re contributing, that’s showing love for their city,” said Glen Brooks, director of the Chicago Police Department’s Office of Community Policing. “It really is. The people who choose to do that, that’s what it is. They don’t want to ... be that person who contributes (to violence) unintentionally.”

A study from last year looked at the National Incident Based Reporting System and the National Vital Statistics System in a search for evidence of the efficacy of gun buyback programs. The study found “no evidence” that the programs reduce gun suicides or homicides. The “results suggest that (gun buyback programs) have been an inefficient use of taxpayers’ dollars,” and it’s possible that “alternative firearm-related policies, such as safe storage laws or stricter background checks, would be more effective at deterring gun violence.”

One of that study’s authors, D. Mark Anderson, said a central question was whether these programs had any effect on gun violence.

“Might some type of program matter that we could think of? Maybe,” he told CNN. “But as implemented in the U.S.? I don’t think they’ve mattered.”

One of the benefits of the programs, Brooks said, was giving residents a safe way to dispose of “one of the most durable products out there.” Guns outlast nearly every consumer good, he said.

“It has an additive benefit that shouldn’t be discounted or looked down upon because an academic study says this won’t reduce crime by ‘x’ percentage points,” Brooks said. “But we know for an absolute fact that guns are used in suicides, in homicides, and of course shootings. Those things, taking that weapon out of a place it’s unwanted and unused, giving people a responsible method for disposing of it, have a benefit.”