Aurora Mayor Richard Irvin, a GOP gubernatorial hopeful, is facing criticism over campaign contributions that he and funds tied to him have received from businesses that were awarded tens of millions in city contracts and incentives.

WTTW News previously reported that Scientel Solutions, a company that received $3.2 million in city tech and security contracts, as well as approval to build a communications tower, donated more than $135,000 through both the company and employees to funds connected to Irvin and his former law partner, Brittany Pedersen.

Pedersen is running as a Democrat for a Kane County Circuit Court judge position.

A WTTW News review of public records has also found that Aurora taxpayers are on the hook for tens of millions in tax incentives to two other development companies that have donated thousands to Irvin and political funds connected to him. While not illegal, good government advocates say accepting campaign donations from those who also benefit from city contracts and approvals can sow distrust in public officials.

When asked about the specific development projects and campaign donations, Irvin’s campaign responded with a written statement.

“Under Mayor Irvin’s tenure, Aurora has seen more economic development than any time in the city’s recent history, and his proven record of revitalizing Aurora is in stark contrast to J.B. Pritzker who has driven thousands of families and businesses out of Illinois with his high-tax, pro-criminal agenda,” the campaign statement reads.

Pedersen did not respond to multiple calls and messages seeking comment on the campaign donations.

Alisa Kaplan, executive director of the nonpartisan research and advocacy organization Reform for Illinois, said weak campaign finance laws in Illinois allow public officials to collect donations from businesses they make policy decisions about and can affect how residents view their local governments.

“This is the problem with weak campaign finance laws, and with a system where many elected officials depend on big donations to run their campaigns,” Kaplan said in an email. “Constituents can end up wondering if these decisions were made in their best interest or to boost officials’ campaign accounts. That can lead to a serious loss of trust in your government.” 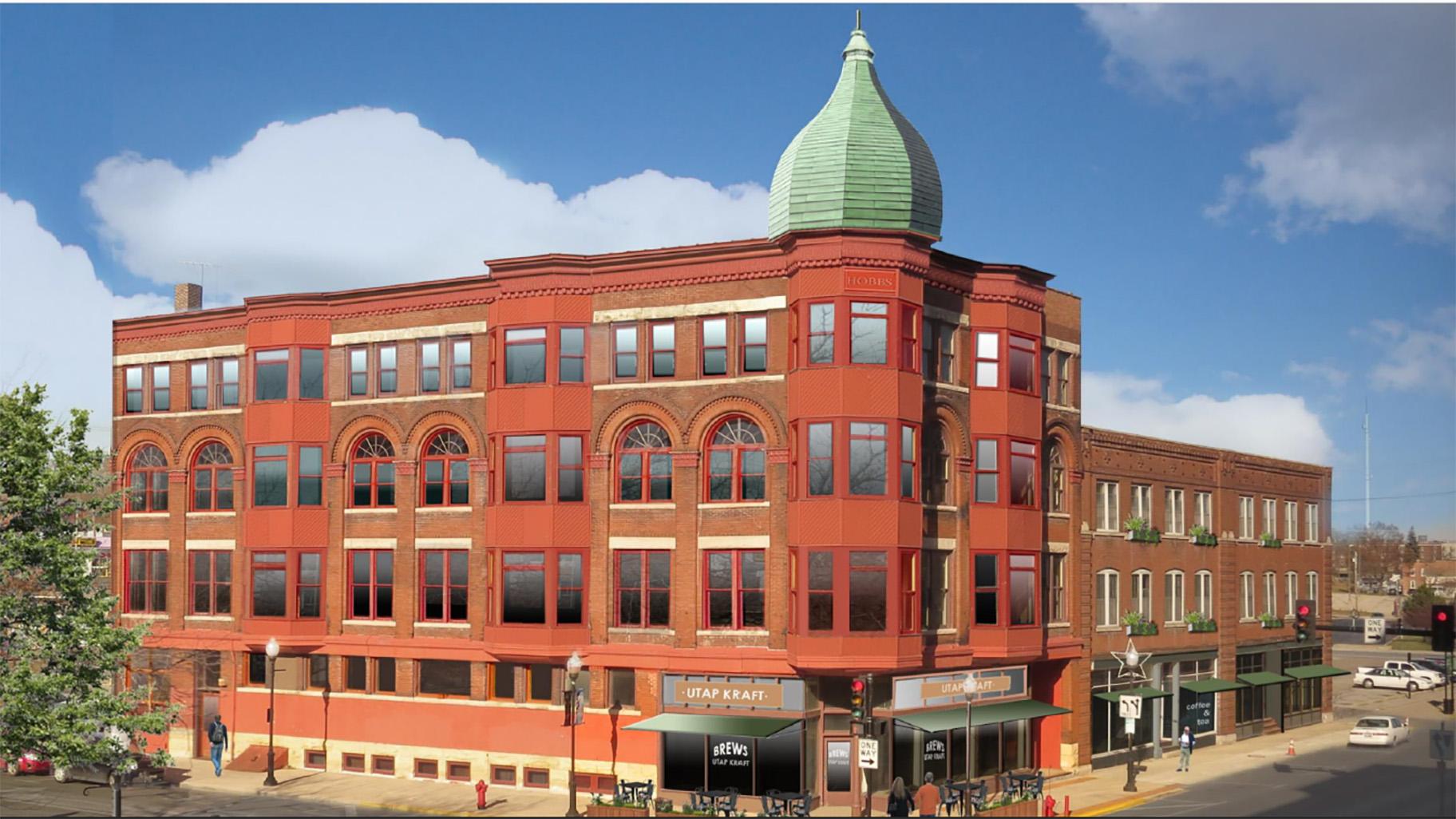 The Hobbs Building in Aurora, pictured in a rendering after development, had long sat vacant on a parcel of land one block away from the Fox River before the city reached a deal with developers. (City of Aurora)

Aurora public records and Illinois campaign disclosures show a firm that received more than $3 million in public aid, plus the promise of future tax revenue to redevelop a historic downtown building, donated more than $74,000 to political funds connected to Irvin. The money came via the company, its owners and their other businesses.

The Hobbs Building had long sat vacant on a parcel of land one block away from the Fox River and near the popular Paramount Theatre and Hollywood Casino. Irvin cheered the project as the capstone to a redevelopment effort that involved several vacant downtown buildings.

In September 2019, the Aurora City Council approved an agreement giving the $300,000 building away to a company called JH Real Estate Partners at no cost. The firm, owned by business partners Harish Ananthapadmanabhan and Jay Punukollu, also owns the two buildings next door.

The agreement calls for a $13 million overhaul of the three buildings, creating 31 market-rate apartments and first-floor commercial space.

In addition, the city gave JH Partners a $1.5 million grant and a $1.5 million bridge loan, which Aurora paid for with a line of credit. The city also created a small Tax Increment Financing district that will disburse up to 80% of the new tax revenue generated within the district over a 23-year period to the company to pay for redevelopment costs.

In presenting the deal to council members, city officials said the incentives were needed to make the overhaul financially feasible for the developer, which has been involved in several other real estate projects in downtown Aurora.

In March 2021, the company also donated $12,000 to the Build R Future PAC, controlled by Irvin’s mayoral campaign manager Dennis Cook. That was one month after the Aurora City Council agreed to adjust the timeline for redeveloping the buildings.

Ananthapadmanabhan and other businesses he controls have also contributed $24,000 to Build R Future, $7,250 to Irvin’s campaign, and $9,000 to Pedersen’s campaign.

Punukollu and another business he controls have given $12,000 to Build R Future and $7,500 to Pedersen’s fund.

Build R Future has deposited $50,000 from its own coffers into Pedersen’s judicial campaign, records show.

Ananthapadmanabhan and Punukollu told WTTW News via email that their donations to Irvin and the PAC were not connected to the redevelopment agreement.

“Richard Irvin has been pro-business and has been very supportive in the overall development in Downtown Aurora,” they wrote. “The economic development team that he put together, when he took … office are problem solvers and look for creative solutions instead of nay saying. Also, the crime-rate in downtown Aurora has dwindled dramatically from where it used to be. … These were the main reasons for us to continue supporting Richard Irvin.”

The two say they met Brittany Pedersen ahead of her first judicial campaign in 2020 and were impressed.

“Being a young, female minority candidate for Judge, she is already running against all odds, and being part of the minority community ourselves, we want to support her wholeheartedly,” they wrote

Pedersen was listed as “Not Recommended” for the office in a 2020 scorecard from the Illinois State Bar Association.

Public and campaign records, as well as previous reports reviewed by WTTW News, show that another developer that donated $25,000 to Irvin’s mayoral campaign stands to receive more than $25 million in Aurora city incentives.

In May 2021, Irvin cut the ribbon on the second phase of Pacifica Square, a massive 360,000-square-foot retail development on the city’s east side that officials say is the largest Asian-American themed shopping mall in the country.

It is anchored by a large Asian grocery store called Park To Shop, and is billed as a “one-stop Lifestyle Center that combines shopping, dining, entertainment, leisure, business, and service.”

The mall is part of an Aurora company called The Windfall Group, LLC, owned by Naperville-based developer Eddie Ni.

In October 2020, the Aurora Beacon-News reported that Pacifica Square received an initial round of tax incentives worth as much as $15 million over several years, mainly through sales tax rebates generated from a tax surcharge on business occupants in the mall.

Later that month, public records show that council members approved a $2 million increase in tax incentives for Pacifica Square due to the success of the initial phase of the mall. 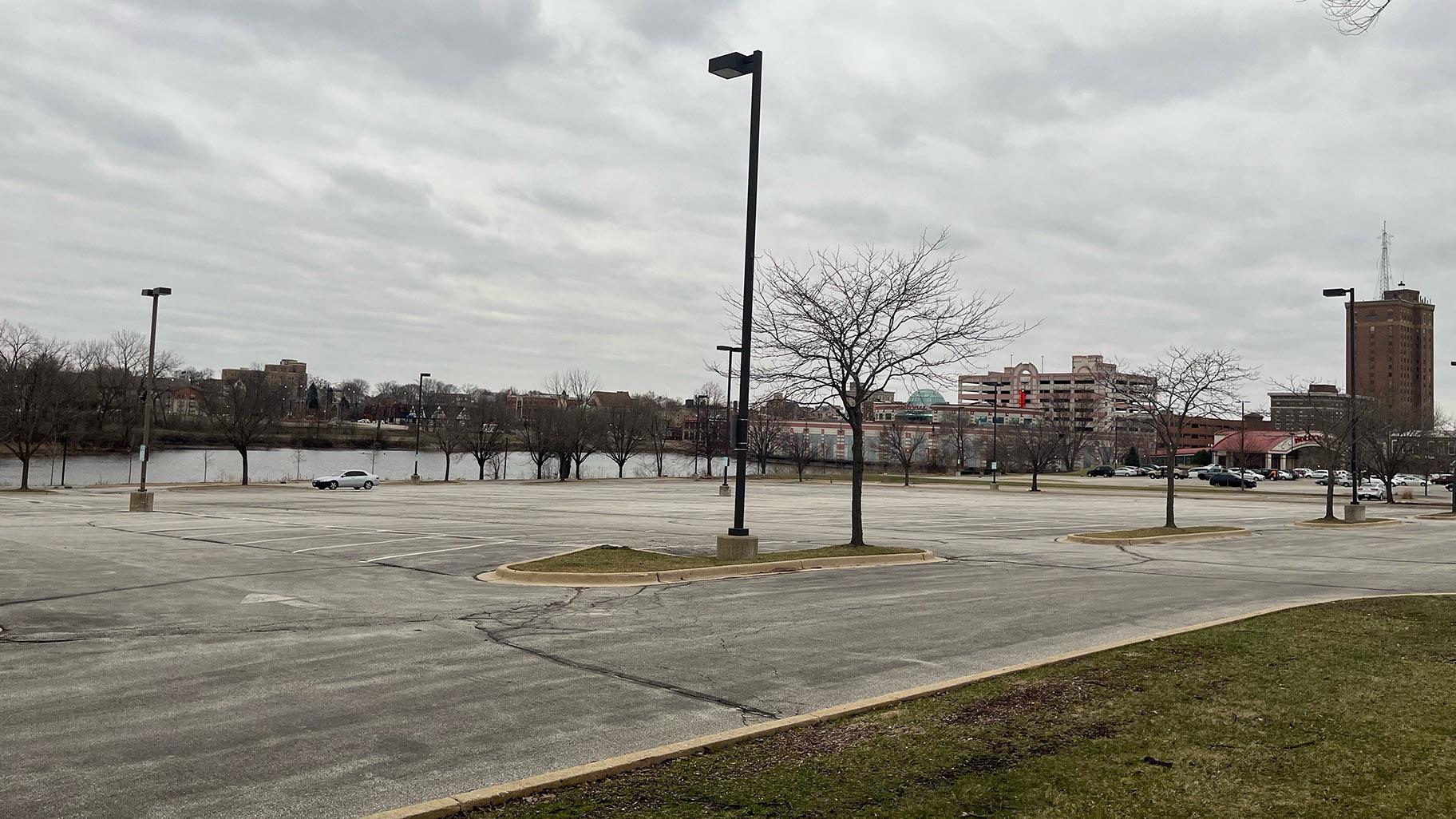 The city of Aurora struck a deal with Windfall to develop a three-acre lot into 160 apartment and townhouse units north of downtown. (Paris Schutz / WTTW News)

This February, Aurora’s City Council struck an agreement with Windfall to redevelop a three-acre, city-owned parking lot into 160 apartment and townhouse units on the west bank of the Fox River just north of downtown.

The city recently built a pedestrian and bicycle bridge on the property, connecting it to an outdoor band shell and Aurora’s main commuter train station on the east side of the river. As part of the agreement, the city donated the land, worth $2 million, to Windfall.

On top of that, the city gave Windfall a $6.6 million forgivable loan and up to $500,000 in reimbursements for pre-construction costs. The agreement called for Windfall to invest $54 million of its own money into the project.

The ordinance noted the need for public aid, due to “blighting factors in the Riverfront Area,” and that “it is necessary to incur extraordinary costs in order to redevelop the riverfront area,” even though a city manager told council members that the land had received significant interest from developers.

“I think they’re doing the right thing,” Eddie Ni told WTTW News. “If you don’t have the right incentives, nobody would do business here.”

The Chicago Sun-Times previously reported Ni is the developer referenced in a sweeping indictment of former Illinois House Speaker Mike Madigan. Ni and Windfall reportedly agreed to hire Mike Madigan’s property tax law firm in exchange for Madigan pushing legislation to transfer a parcel of state-owned land in Chinatown that Ni wanted to develop.  The Sun-Times reported that Irvin’s current running mate for lieutenant governor, state Rep. Avery Bourne, amended legislation to include the transfer of land, but the deal never happened.

Public campaign records show that since 2018, Irvin’s mayoral political fund has received $25,000 in donations connected to Windfall, $3,500 of which came from Pacifica Square, $12,000 from a company listed with the same owners and same address called Pacific Square (without the “a”), and $9,500 from company owner Eddie Ni and real estate director Judy Ni.

Eddie Ni said there was no connection between the donations and awarded incentives.

“We donated small amounts over many years,” Ni said. “Everybody does that, both in and outside of Aurora.”

Irvin is the handpicked gubernatorial candidate of the state’s wealthiest resident, Citadel founder Ken Griffin. Griffin has deposited $20 million in Irvin’s campaign and has vowed that Irvin would clean up the corruption pervasive in state government.

“Richard knows the importance of ending wasteful spending and reducing oppressively high taxes. Illinois taxpayers are tired of sending their hard-earned money to Springfield to be burned in the furnace of waste and corruption. J.B. Pritzker — beholden to his cronies and political base — is unwilling to address either issue,” Griffin said in a statement when he announced his support.

Irvin’s GOP rivals have been quick to slam his record of receiving campaign donations from firms doing business with Aurora.

On Tuesday, businessman Gary Rabine said that Irvin “turns out to be more like Mike Madigan than the reformer this state badly needs.”

State Sen. Darren Bailey said, “Career Democrat Richard Irvin’s pay to play approach as Mayor of Aurora is one of the many red flags surrounding his campaign.”

Venture Capitalist Jesse Sullivan said that he believes Illinoisans are “sick and tired of career politicians on both sides of the aisle who use public office to benefit themselves and their friends.”

Attorney Paul Schimpf, also running in the GOP primary for governor, did not return a request for comment.

Kaplan, of Reform for Illinois, also notes that Illinois election law views campaign donations from corporate entities differently than some other states.

“In Illinois, corporations can donate directly to candidates — this is not true in the federal government or in 22 other states,” Kaplan said in an email.