According to his campaign website, GOP gubernatorial candidate Richard Irvin has vowed to “fight tooth and nail to bring honest and good government back to Illinois.” But his own record as Aurora mayor raises questions about how political donations flowed from companies that were awarded municipal contracts and benefits.

A review of state campaign filings and Aurora public records shows that a company that donated more than $135,000 to political funds connected to Irvin also received millions in city contracts. That same company was also the beneficiary of legislation pushed by Irvin that could prove lucrative. It follows a pattern of Aurora businesses donating to Irvin and receiving tens of millions in public aid and tax incentives, as first outlined in a 2018 story from the Aurora Beacon-News.

Scientel Solutions is an Aurora-based telecommunications company that bills itself as a “technology integrator,” and has contracted with municipal governments to specialize “in networking, drone defense, security and smart city solutions.”

One of those municipal governments is the city of Aurora itself, which has awarded more than $3.2 million in tech and security contracts to Scientel during Irvin’s tenure, according to Aurora public records. One of the contracts was for “Network Infrastructure Managed Services of city-wide network infrastructure,” at a cost of $1.8 million. The other was a three-year, $1.3 million contract to maintain city security cameras.

An examination of state campaign filings shows that Irvin’s mayoral political committee has received at least $67,000 in combined contributions from Scientel, the company’s CEO Nelson Santos, his wife, and from company employees.

Scientel also routed $68,500 in additional donations to a political action committee connected to Irvin called “Build R Future.” The PAC was formed in February 2019 and is run by Dennis Cook, who also served as campaign manager for Irvin’s 2017 and 2021 mayoral bids. Nearly all of the PAC’s expenditures were to a political consulting firm that Cook runs called Strive Strategies.

Cook would not consent to an interview, but in a written statement said that Build R Future “was created to help promote candidates in DuPage, Kane and Kendall counties.”

Public records show that Build R Future has contributed $50,000 to the campaign of Irvin’s former private practice law partner Brittany Pedersen, a criminal defense attorney who is running as a Democrat for Kane County Circuit Court judge. Scientel has also contributed $10,000 to Pedersen’s judicial campaign, and Santos has contributed an additional $4,000. In 2020, the Illinois State Bar Association rated her as “not recommended” for the office. 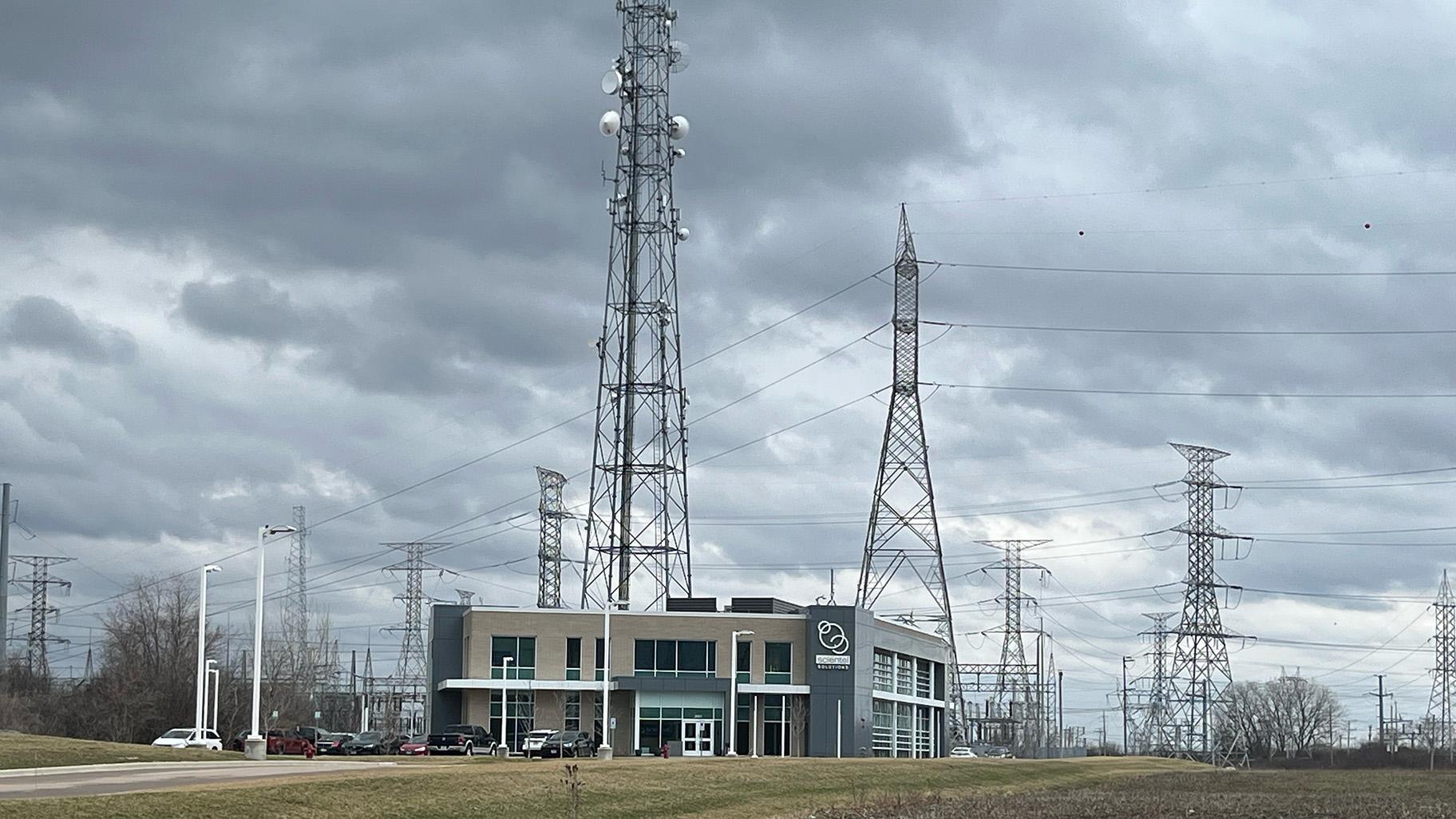 Scientel Solutions, pictured in March 2022, relocated to Aurora after plans for its tower were approved in 2018. (WTTW News)

In his role as mayor, Irvin pushed for Scientel’s relocation from Lombard to a vacant parcel of land on Aurora’s far-east side, and to allow for a 195-foot communications tower to be built on its property. Aurora’s City Council initially voted 7-3 against a special use permit for the tower in November 2017.

Council members feared it would impede the function of another communications tower across the street, owned by a company called CyrusOne. That tower is connected to a data center that houses the electronic trading platform for the Chicago-based CME Group, the largest derivatives exchange in the country.

Three months later in January 2018, and after convincing from Irvin, the council reversed course and approved the project in a 7-5 vote. Campaign records show that Irvin received a $10,000 donation from Scientel in April of that year. CyrusOne later sued both the Aurora City Council and Scientel, alleging Scientel’s new tower would interfere with the function of its own tower. The lawsuit was settled in 2019 but the terms have not been disclosed.

Santos, Scientel’s CEO, declined an interview with WTTW News, but in a response to written questions wrote that the company’s political support of Irvin had nothing to do with the tower approval or the contracts.

“All of Scientel’s contracts went through a competitive bid process managed by a third party in which third party made the recommendations to City Staff who then selected Scientel as the prime. These decisions are generally made on the basis of the applicant’s experience and pricing,” the statement reads.

Santos wrote that the company has contributed to Democrats and Republicans, as well as various charitable causes, and has provided financial support to Irvin because of his “vision for Aurora.”

In 2018, Irvin told the Aurora Beacon-News that he never speaks to companies about campaign donations, and that the City Council’s change of heart on the communications tower came down to “education.”

A former Aurora council member who supported the project both times said Irvin strong-armed council members to change their votes.

“The mayor called us in one at a time and said ‘We need to make this happen,’” said former Aurora Ald. Judd Lofchie, who represented Scientel’s district and ran a failed campaign for mayor in 2021 to unseat Irvin.

“His tactics are intimidating. He feels he doesn’t need to give us a reason why,” Lofchie said. “If you’re not on board, you’re told you’re not a team player.

Clayton Muhammed, a spokesperson for the city of Aurora, said Scientel has had a positive relationship with the city.

“Over the past four years, Scientel Solutions has been a stalwart corporate citizen in Aurora, funding community organizations that focus on mitigating homelessness and supporting veterans in both Aurora and Naperville,” Muhammed said. 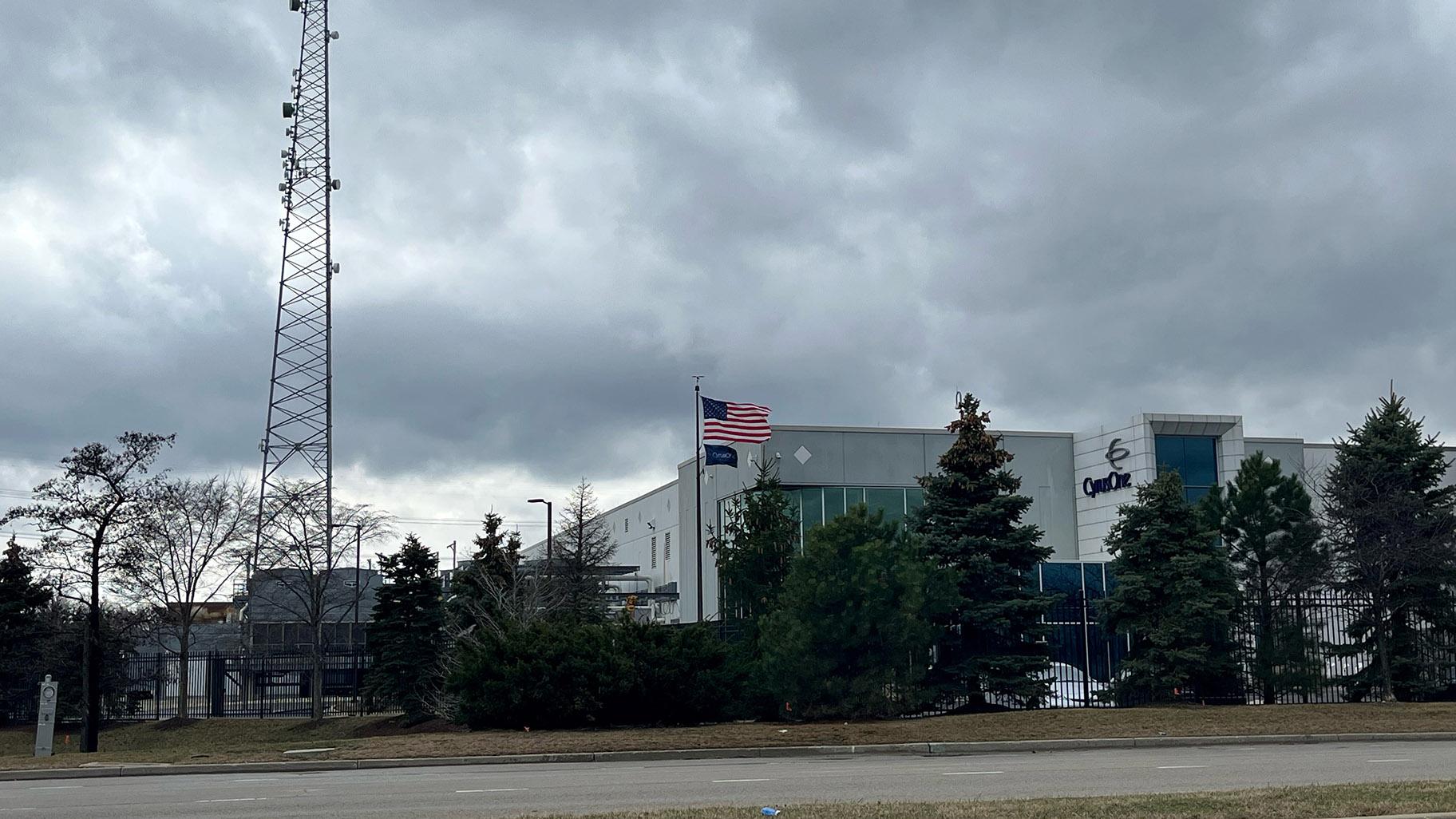 CyrusOne’s tower in Aurora is connected to a data center that houses the electronic trading platform for the Chicago-based CME Group. (Paris Schutz / WTTW)

Scientel’s communications tower has drawn intrigue in the financial world because of its reported use in the lucrative and murky world of high frequency trading. That’s where big trading companies rely on computer algorithms to conduct a large volume of transactions in fractions of a second, and benefit from technology that allows them to do it faster than other traders.

One industry insider, who works at a competing firm and asked not to be named, likened it to cutting in line in front of everyone else.

A trader can essentially transmit information from the CME exchange, located hundreds of feet away, via Scientel’s antenna to markets on the East Coast, and do it a millionth of a second faster than traders using conventional broadband or fiber optic cable.

But who’s getting rich off of Scientel’s tower? A 2019 Bloomberg article speculated it was Citadel Securities, the trading firm owned by the main benefactor of Irvin’s campaign for governor, Ken Griffin.

When asked in a written question if it was accurate that Citadel Securities was utilizing Scientel’s tower for high frequency trading, Santos wrote back, “that is not accurate,” going on to say that the company does not disclose all of the tower’s uses. Santos would not return follow up calls asking him to clarify his answers.

CyrusOne and the CME Group did not return repeated calls and messages seeking comment.

Griffin has publicly supported Irvin’s bid for governor to unseat incumbent Democratic Gov. J.B. Pritzker. He has leaned in on Irvin’s perceived record on criminal justice, and is betting on Irvin to clean up Illinois’ history of corruption.

“Richard knows the importance of ending wasteful spending and reducing oppressively high taxes. Illinois taxpayers are tired of sending their hard-earned money to Springfield to be burned in the furnace of waste and corruption. J.B. Pritzker — beholden to his cronies and political base — is unwilling to address either issue,” Griffin said in a statement when he announced his support.

Irvin has said he had never met Ken Griffin until the race for governor. Griffin told the Better Government Association in February that Irvin had first appeared on his radar “months ago.”

Lofchie says that Irvin’s record of accepting big campaign donations from companies that got city benefits has crossed ethical lines.

“Whether it’s legal or not is one thing, but it just doesn’t look good for Aurora,” Lofchie said.

Note: This story was updated to add comment from Citadel Securities.