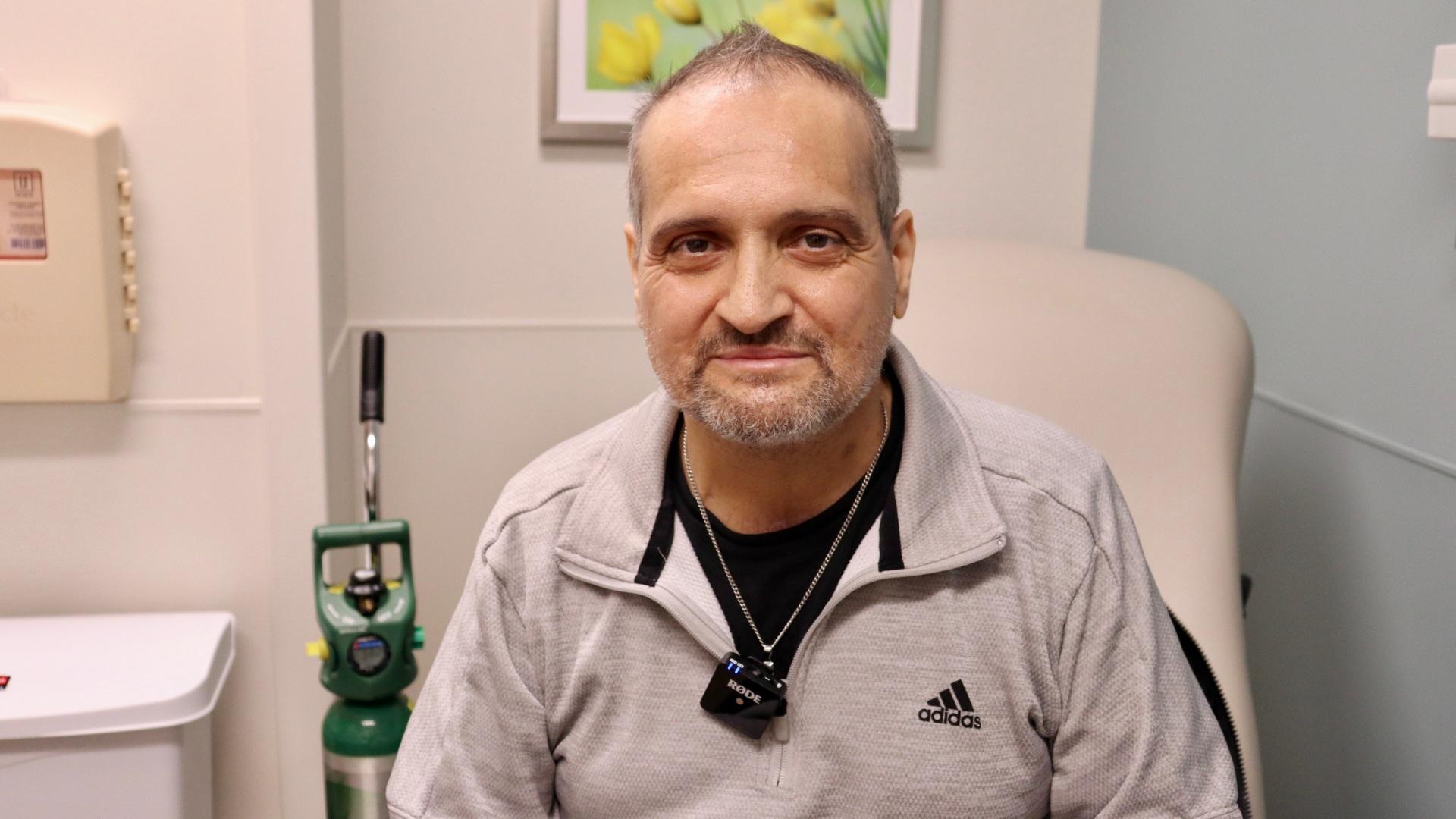 Six months ago, Chicagoan Albert Khoury underwent a double lung transplant to treat stage 4 lung cancer at Northwestern Medicine. It was the first time such a procedure was performed there on a patient with what was deemed to be terminal lung cancer. Khoury, 54, is now doing well and has no signs of cancer.

“Lung transplantation for lung cancer is an uncommon procedure with few cases reported today,” said Dr. Ankit Bharat, chief of thoracic surgery at Northwestern Medicine. “It’s not something performed in patients like Albert.”

In early 2020, Khoury was working as a cement finisher for the Chicago Department of Transportation when he began experiencing back pain, chills and coughing up mucus mixed with blood. Khoury thought it was COVID-19, but he was diagnosed with stage 1 lung cancer.

His treatment was delayed due to the pandemic and by July 2020, he was diagnosed with stage 2 lung cancer. Khoury’s cancer progressed to stage 4 despite treatments, and he was offered hospice care.

After seeing a news report about Northwestern Medicine performing a double lung transplant in a COVID-19 patient, Khoury’s sister encouraged him to make an appointment to see if lung transplantation could be an option.

He met with Dr. Young Chae, a medical oncologist with Lurie Cancer Center at Northwestern Medicine.

“He was drowning with cancer cells inside his lungs,” said Chae, who wanted to try other treatment options first because lung transplantation isn’t the standard of care.

But Khoury’s health continued to decline, and he ended up in the intensive care unit on a ventilator with pneumonia and sepsis.

“By the time (Albert’s) in the ICU, his lungs are packed with cancer cells and mucus,” said Chae. “There were no more medical treatments available for him at that time because he was so sick. His life expectancy at that time was days, not even weeks. I would say he was really getting to his last moment.”

With Khoury’s oxygen levels dropping daily, Chae wondered if a lung transplant was an option even though cancer is considered a contraindication for transplantation.

“I ran into Dr. Bharat and I explained the situation. His team did a transplant evaluation and because the tumor was localized to Albert’s chest and not spreading (which is rare for stage 4 lung cancer) he was eligible for a transplant,” Chae said. 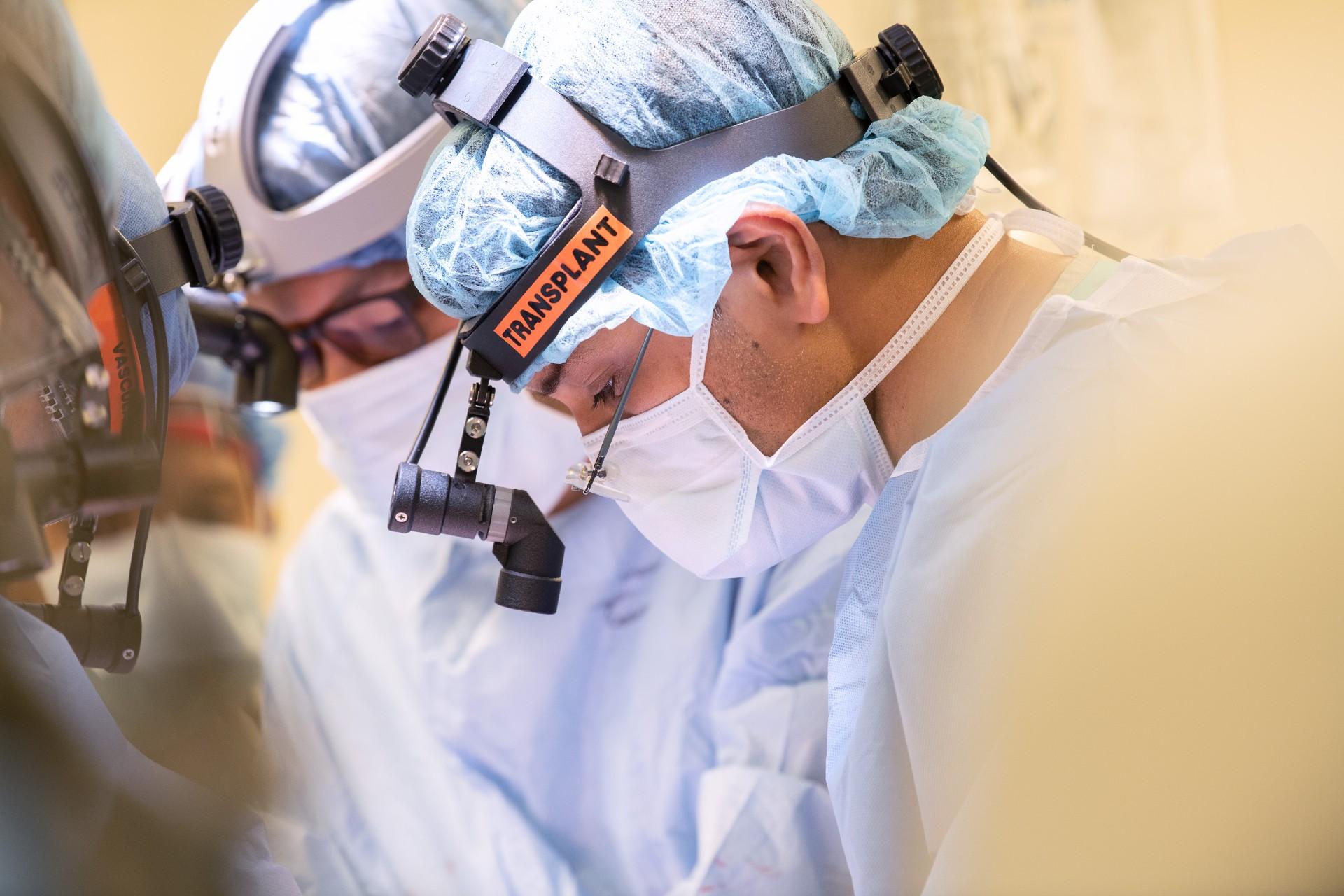 After two weeks on the transplant list, Khoury underwent a seven-hour double lung transplant surgery on Sept. 25, 2021. During the operation, surgeons had to be extremely careful to not let trillions of cancer cells from the lungs spill into Khoury’s chest cavity or into his bloodstream.

Performing lung transplants for COVID-19 helped prepare surgeons for Khoury’s case because surgeons must prevent the infection in the lungs from spreading into the bloodstream, according to Bharat. “The lessons learned with COVID-19 transplants allowed us to take on this meticulous operation.”

Still, clinicians were concerned about the possibility of Khoury’s cancer returning.

“One of the biggest fears of performing a transplant on anyone who has cancer is the risk of recurrence after transplant,” Bharat said. “All transplant patients require medications to control their immune systems, which has an immune-suppressive effect. The concern is that if you suppress someone’s immune system and they have lingering cancer cells in the body, those will flare up very quickly.”

But Khoury’s cancer hasn’t returned. “We were able to remove it all and it feels surreal to see his follow-up scans that are clean,” said Chae.

As for Khoury, he’s grateful for his medical team.

“They’re my guardian angels. They didn’t give up on me when I came to them,” Khoury said. “I want to tell other patients don’t give up. Don’t give up. Stay strong. Don’t let this cancer destroy you.”

Because the outcome was so successful, Bharat and Chae are developing a new set of protocols for treating lung cancer patients at Northwestern Medicine. They’re in the process of starting a clinical registry to track the progress of such patients over time.

“(This) provides new hope for lung cancer patients at Northwestern Medicine,” Bharat said. “We see a number of patients each year with the same type of cancer and we had to lose them each year. Despite everything we do they just die. I think it’ll be very impactful.”

But they caution the treatment isn’t a panacea.

“Lung cancer is still best treated … by targeted therapy and surgery in combination with radiation treatments,” Bharat said, adding lung transplantation could be an option for patients who fail first-line treatments as well as customized and personalized treatments for cancer.

As for Khoury, he plans to make the most out of life.

“Every day I see a sunrise, I’m the happiest guy in the world,” he said, adding he plans to go to dinner with his family to celebrate his six-month surgery anniversary. “I’m 54. I’ve got to enjoy life now – it’s the biggest chance I have. … Life is special.”