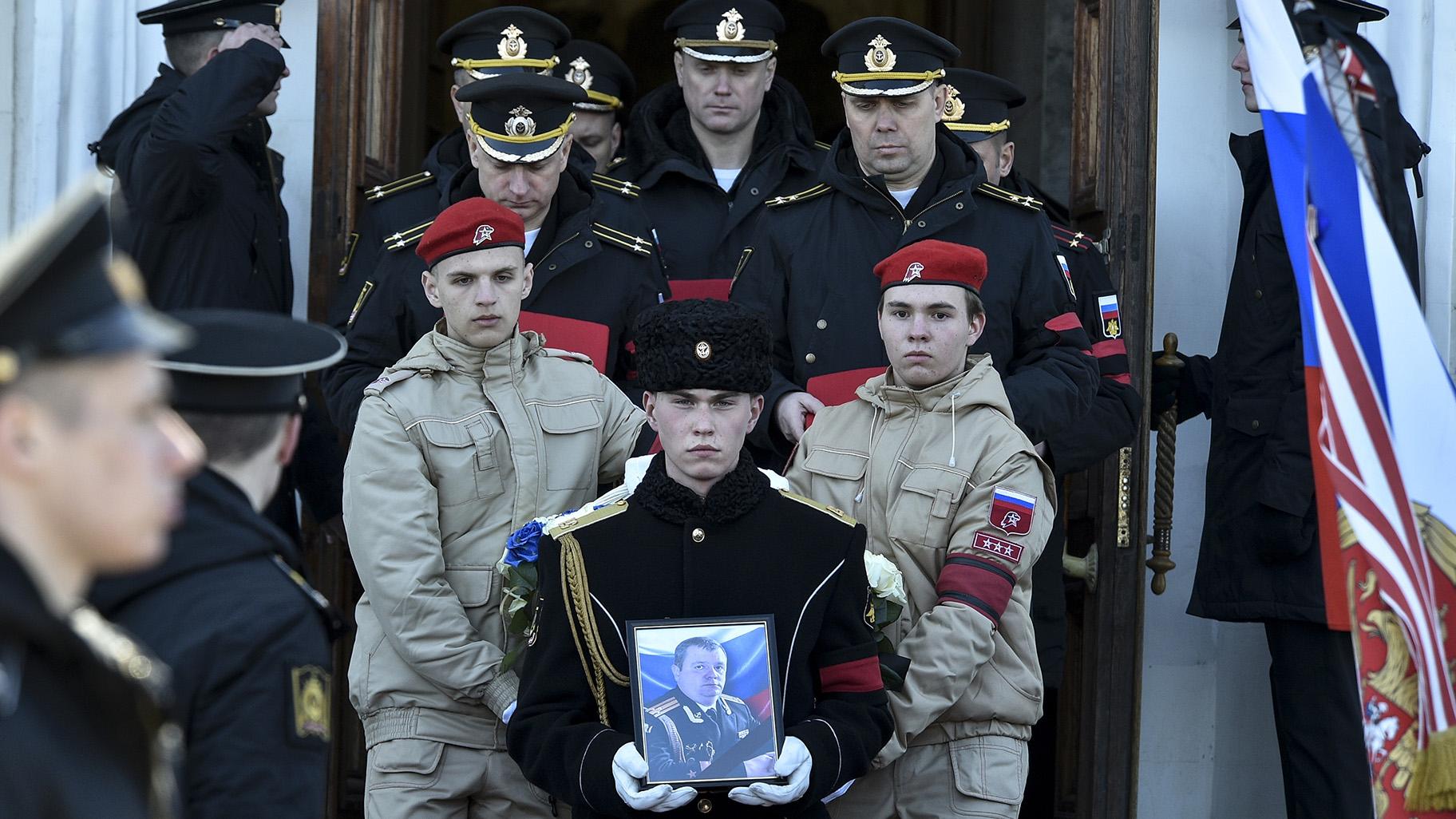 A serviceman carries the photo of Capt. Andrei Paliy, a deputy commander of Russia's Black Sea Fleet, during a farewell ceremony in Sevastopol, Crimea, Wednesday, March 23, 2022. Paliy was killed in action during fighting with Ukrainian forces in the Sea of Azov port of Mariupol. (AP Photo)

KYIV, Ukraine (AP) — NATO estimated on Wednesday that 7,000 to 15,000 Russian soldiers have been killed in four weeks of war in Ukraine, where fierce fighting by the country’s fast-moving defenders has denied Moscow the lightning victory it sought.

By way of comparison, Russia lost about 15,000 troops over 10 years in Afghanistan.

A senior NATO military official said the alliance’s estimate was based on information from Ukrainian authorities, what Russia has released — intentionally or not — and intelligence gathered from open sources. The official spoke on condition of anonymity under ground rules set by NATO.

When Russia unleashed its invasion Feb. 24 in Europe’s biggest offensive since World War II, a swift toppling of Ukraine’s government seemed likely. But with Wednesday marking four full weeks of fighting, Moscow is bogged down in a grinding military campaign.

With its ground forces slowed or stopped by hit-and-run Ukrainian units armed with Western-supplied weapons, Russian President Vladimir Putin’s troops are bombarding targets from afar, falling back on the tactics they used in reducing cities to rubble in Syria and Chechnya.

As U.S. President Joe Biden left for Europe to meet with key allies about new sanctions against Moscow and more military aid to Ukraine, he warned there is a “real threat” Russia could use chemical weapons.

The U.S. government has also determined that Russian troops have committed war crimes in Ukraine, and it will work to prosecute the offenders, Secretary of State Antony Blinken said. He cited evidence of indiscriminate or deliberate attacks against civilians and the destruction of apartment buildings, schools, hospitals, shopping centers and other sites.

Addressing Japan’s parliament, Ukrainian President Volodymyr Zelenskyy said thousands of his people have been killed, including at least 121 children.

“Our people cannot even adequately bury their murdered relatives, friends and neighbors. They have to be buried right in the yards of destroyed buildings, next to the roads,” he said.

Still, major Russian objectives remain unfulfilled. The capital, Kyiv, has been bombarded repeatedly but is not even encircled.

Near-constant shelling and gunfire shook the city Wednesday, with plumes of black smoke rising from the western outskirts, where the two sides battled for control of multiple suburbs. Mayor Vitali Klitschko said at least 264 civilians have been killed in the capital since the war broke out.

In the south, the encircled port city of Mariupol has seen the worst devastation of the war, enduring weeks of bombardment and, now, street-by-street fighting. But Ukrainian forces have prevented its fall, thwarting an apparent bid by Moscow to fully secure a land bridge from Russia to Crimea, seized from Ukraine in 2014.

Zelenskyy said 100,000 civilians remain in a city that had 430,000 people before the war. Efforts to get desperately needed food and other supplies to those trapped have often failed.

In their last update, over a week ago, Mariupol officials said at least 2,300 people had died, but the true toll is probably much higher. Airstrikes in the past week destroyed a theater and an art school where civilians were sheltering.

In the besieged northern city of Chernihiv, Russian forces bombed and destroyed a bridge that was used for aid deliveries and civilian evacuations, regional governor Viacheslav Chaus said.

Kateryna Mytkevich, who arrived in Poland after fleeing Chernihiv, wiped away tears as she spoke about what she had seen. The city is without gas, electricity or running water, said Mytkevich, 39, and entire neighborhoods have been destroyed.

“I don’t understand why we have such a curse,” she said.

Despite plenty of evidence to the contrary, Kremlin spokesman Dmitry Peskov insisted the military operation is going “strictly in accordance” with plans.

The most recent figure for Ukraine’s military losses came from Zelenskyy on March 12, when he said that about 1,300 Ukrainian servicemen had been killed in action.

The NATO official said 30,000 to 40,000 Russian soldiers are estimated to have been killed or wounded.

Russia has released very little information on its casualties, saying March 2 that nearly 500 soldiers had been killed and almost 1,600 wounded.

The figures from NATO represent the alliance’s first public estimate of Russian casualties since the war began. The U.S. government has largely declined to provide estimates of Russian or Ukrainian casualties, saying available information is of questionable reliability.

With casualties mounting and quick victory no longer in sight, Russia is having to work to suppress dissent and shore up morale.

It has arrested thousands of antiwar protesters and cracked down on the media. Also, under a law passed Wednesday, troops in Ukraine will get the same benefits as veterans of previous wars, including tax breaks, discounts on utilities and preferential access to medical treatment.

In an apparent reflection of growing divisions in Russia’s top echelons, Anatoly Chubais has resigned, Peskov told the Interfax news agency. Chubais, the architect of Russia’s post-Soviet privatization campaign, had served in a variety of top posts over three decades. His latest role was as Putin’s envoy to international organizations.

Peskov would not say if Chubais had left the country.

Western officials say Putin’s forces are facing serious shortages of food, fuel and cold weather gear, with soldiers suffering frostbite, while Ukraine’s defenders have been going more on the offensive.

Still, Russia’s far stronger, bigger military has many Western experts warning against overconfidence in Ukraine’s long-term odds. The Kremlin’s practice in past wars has been to grind down resistance by flattening cities, killing countless civilians and sending millions fleeing.

Talks to end the fighting have continued by video. Zelenskyy said negotiations with Russia are going “step by step, but they are going forward.”

With no peace, those not yet fighting prepared to do so.

“Everything’s a bestseller these days,” said Zakhar Sluzhalyy, owner of a gun shop in the western city of Lviv.

“We’re defending our land,” he said. “We’re fighting for our freedom and that of the rest of Europe.” 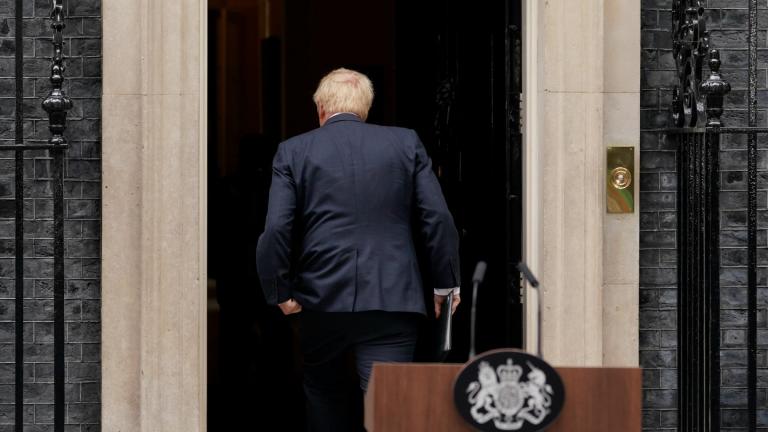