Video: Olga Kamenchuk, an associate research professor at Northwestern University's Institute for Policy Research joins “Chicago Tonight” to discuss how Russians are reacting to their country's invasion of Ukraine and the role state-run media is playing.  (Produced by Evan Garcia)

(CNN) — A Russian state television journalist who protested the invasion of Ukraine during a live news broadcast was found guilty Tuesday of organizing an “unauthorized public event.”

A district court in Moscow said in a statement that Marina Ovsyannikova, an editor at Channel One, had been found guilty of the “administrative offense” and had been fined 30,000 rubles, or $280.

Ovsyannikova was pictured in court earlier with one of her lawyers, Anton Gashinsky.

Dmitry Zakhvatov, a lawyer who had formerly been representing Ovsyannikova, told CNN that the administrative charge was based solely on a video statement that she recorded prior to appearing with an anti-war poster on Channel One.

Taking a courageous stance against Russian President Vladimir Putin and his government, Ovsyannikova on Monday protested on air, standing behind a news anchor with a sign that said: “NO WAR.”

The Kremlin on Tuesday described Ovsyannikova's actions as “hooliganism,” a criminal offense in Russia.

Russian state news agency Tass reported that law enforcement officials had begun a preliminary investigation into the “public dissemination of deliberately false information about the use of the Russian Armed Forces.”

The brave protest has been played repeatedly throughout the day on international television and has captured the attention of political leaders.

“France strongly condemns any imprisonment of a journalist as well as any manipulation and obviously we are going to launch diplomatic steps aimed at offering protection either at the embassy or an asylum protection to your colleague,” Macron told reporters at a Ukrainian refugee center in France.

Macron also said he would raise the issue directly with Putin during their next call. 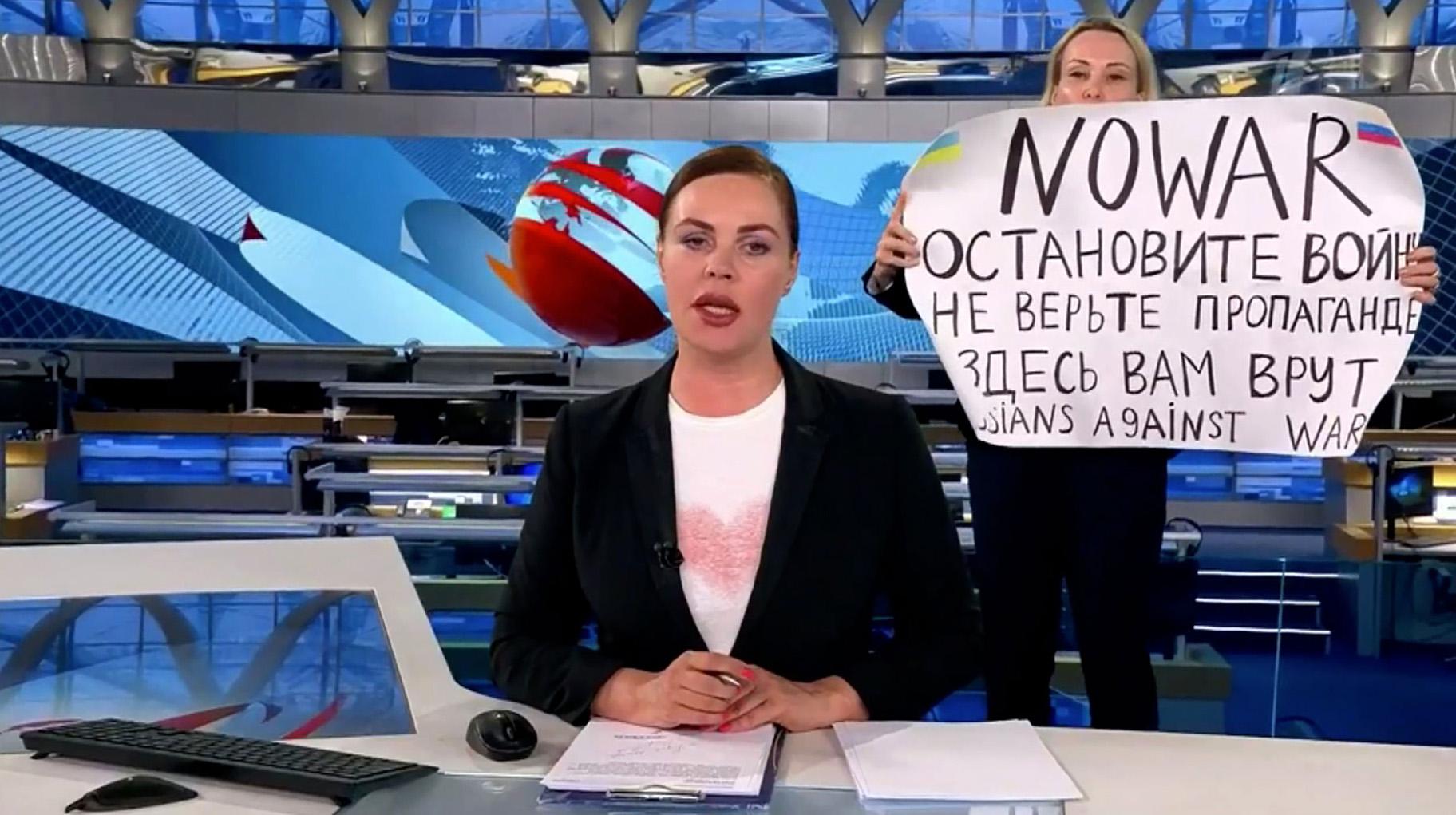 Marina Ovsyannikova protested the Russian war in Ukraine during a live news broadcast on Channel One March 14, 2022. (CNN)

Putin earlier this month signed a censorship bill that criminalizes “fake” information about the invasion of Ukraine, with a penalty of up to 15 years in prison for anyone convicted, according to the Committee to Protect Journalists.

Russia has cracked down on local media outlets over the war in Ukraine and many have curtailed their coverage as a result. International networks such as CNN, ABC News, CBS News and others have stopped broadcasting from Russia. And independent Russian news outlet TV Rain, also known as Dozhd, shut down altogether. Its editor and staff, along with other independent journalists, have left the country.

They've since reportedly been joined by a presenter for the pro-Kremlin NTV channel. State news agency RIA Novosti reported Tuesday that Lilia Gildeeva “no longer works” for NTV.

The Telegram channel for popular Russian blogger Ilya Varlamov reported Gildeeva said in an interview that she had resigned and left the country.

“At first I left [the country], I was afraid that they wouldn't just let me go, then I submitted my resignation,” Varlamov quoted her as saying.

In her video, Ovsyannikova blamed Putin for the war.

“What is happening now in Ukraine is a crime, and Russia is the aggressor country, and the responsibility for this aggression lies on the conscience of only one person. This man is Vladimir Putin,” Ovsyannikova says in the video, noting that her father is Ukrainian, and her mother is Russian.

“Unfortunately, for the past few years, I have been working on Channel One and doing Kremlin propaganda, and now I am very ashamed of it,” she says in the video. “It's a shame that I allowed to speak lies from the TV screens, ashamed that I allowed to zombify Russian people.”

“I am ashamed that we kept silent in 2014, when all this was just beginning,” she says, a reference to Russia's annexation of Crimea.