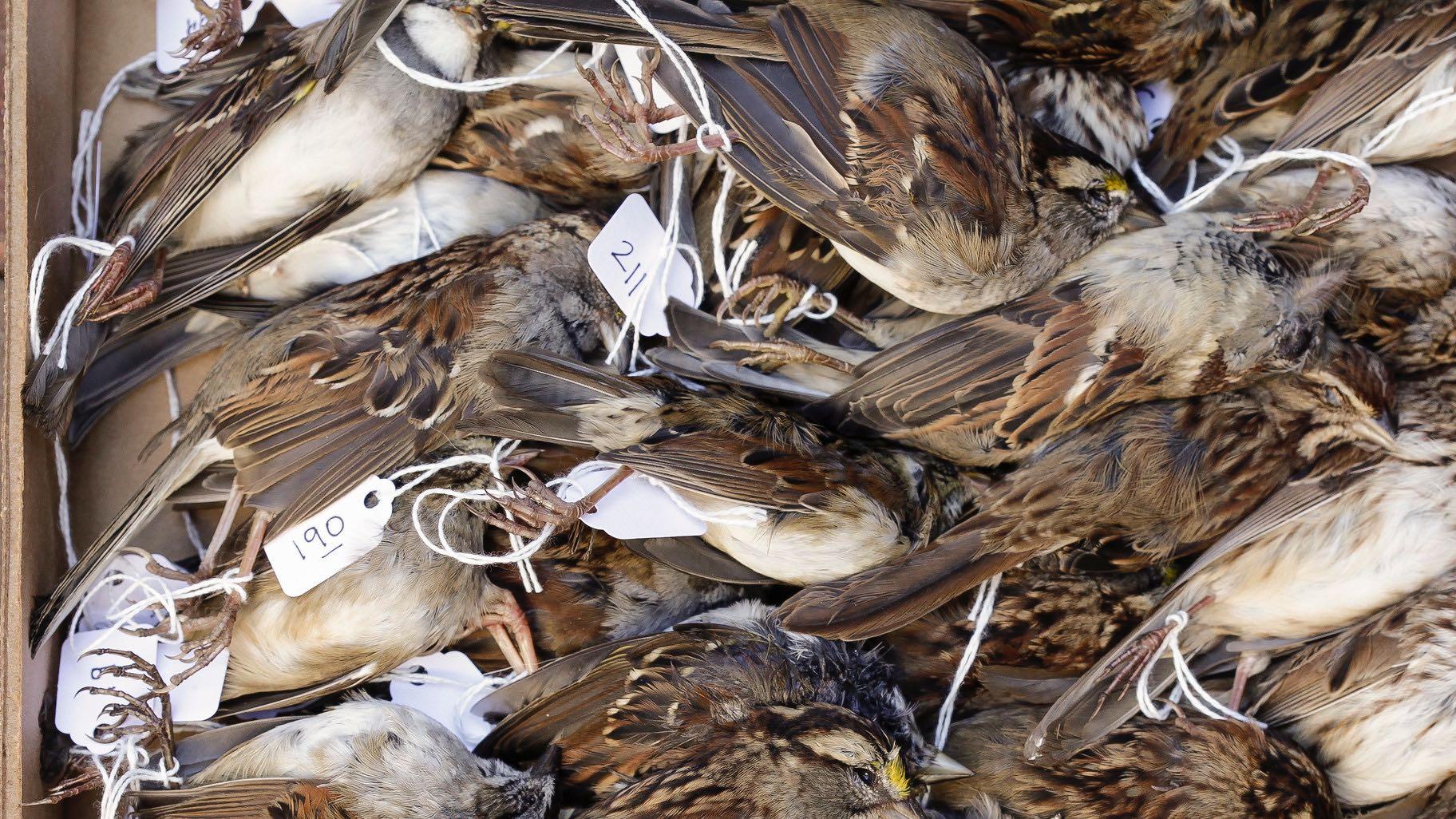 Dead sparrows collected following collisions in Washington, D.C., which, unlike Chicago, isn't situated in a migratory flyway and there are no buildings taller than 10 stories high. (USGS Bee Inventory and Monitoring Lab)

The NCAA’s March Madness bracket-style competition has been co-opted for just about anything and everything, from a competition to determine the ultimate craft beer to Freighter Frenzy, a tournament that pits Great Lakes freighters against one another in celebration of the annual reopening of the Soo Locks.

Chicagoan Robyn Detterline has borrowed the format for a concept that has far higher stakes than Duke vs. North Carolina or pilsner vs. stout. Her matches, which play out on Twitter, determine which birds will survive migration through Chicago.

Detterline is a volunteer with Chicago Bird Collision Monitors and editor of the Chicago Ornithological Society’s magazine The Chicago Birder. She came up with the tourney, March Chicago Collision Bird Migration Madness, as a way to raise awareness not only about the hazards birds face as they pass through Chicago, but the obstacles and threats year-round avian residents encounter as well.

Will the swamp sparrow survive an encounter with an off-leash dog that’s flushed the bird from its hiding spot in Columbus Park? Will a gray-cheeked thrush make it to her breeding ground in Manitoba or will a disorienting pit stop in Hyde Park be the end of her?

Though the narratives Detterline spins for each matchup are fictional, they draw in part on her experiences as a collision monitor.

“A common misconception people have is that window collisions only happen at skyscrapers downtown, but in actuality, the majority of window collisions happen at private residences,” she said. “So through the scenarios I am trying to provide a variety of places and dangers birds face, so people understand that this is a widespread problem that hits closer to home than they think.”

In a Q&A with WTTW News, Detterline talked about her inspiration for the tournament and what she hopes to accomplish.

WTTW News: When did you realize how serious the issue was regarding collisions in Chicago?

Detterline: I have been a volunteer for the Chicago Bird Collision Monitors for about five years. I monitor a route downtown one morning a week in the spring and fall. It’s interesting because years ago I worked in one of the buildings that is now on my monitoring route, but in that time I had never noticed any dead or injured birds. Now, I walk the same route and find dead or injured birds regularly. Once you are aware of the problem and start to look, it’s hard to miss.

WTTW News: What gave you the idea to do a bird collision March Madness?

Detterline: I recently finished reading “Solid Air” by Daniel Klem Jr., who has been researching bird window collisions since the 1970s. In his book he talks about how the research about bird collisions is extensive, the problem is immense and irrefutably detrimental for bird populations, yet for some reason it is has not, in a sense, captured the public’s imagination. Most environmental issues do not elicit action by the powers that be until knowledge of it reaches the general public and a critical mass of citizens demand action. Consider, for example, how “Silent Spring” in the 1960s crossed into the mainstream and sparked, among other things, the banning of DDT. Or how a video of a turtle with a straw stuck up his nose went viral, and suddenly restaurants across the country are banning plastic straws.

So my thought behind the Collision Bird Migration Madness was to think of a new way to bring knowledge of this problem to the public. The hope is that, while I don’t have a huge Twitter following, some of my followers will play along and share some of the tweets, and perhaps a person or two (or hopefully more!) will wonder what this weird bird bracket thing is all about and will take the time to read through some of the threads, learn a little about bird collisions, and care a little more about making the world safer for our feathered friends.

WTTW News: How did you choose the birds included in the bracket?

Detterline: I chose bird species who are known window collision victims in this area. Migratory birds, which only pass through during migration, make up a large part of the bracket, but all birds are susceptible to window collisions, and so there are also summer breeders, winter residents and year-round residents on the list. There are even pigeons and house sparrows on the list, which most people think don’t hit windows. But they do. 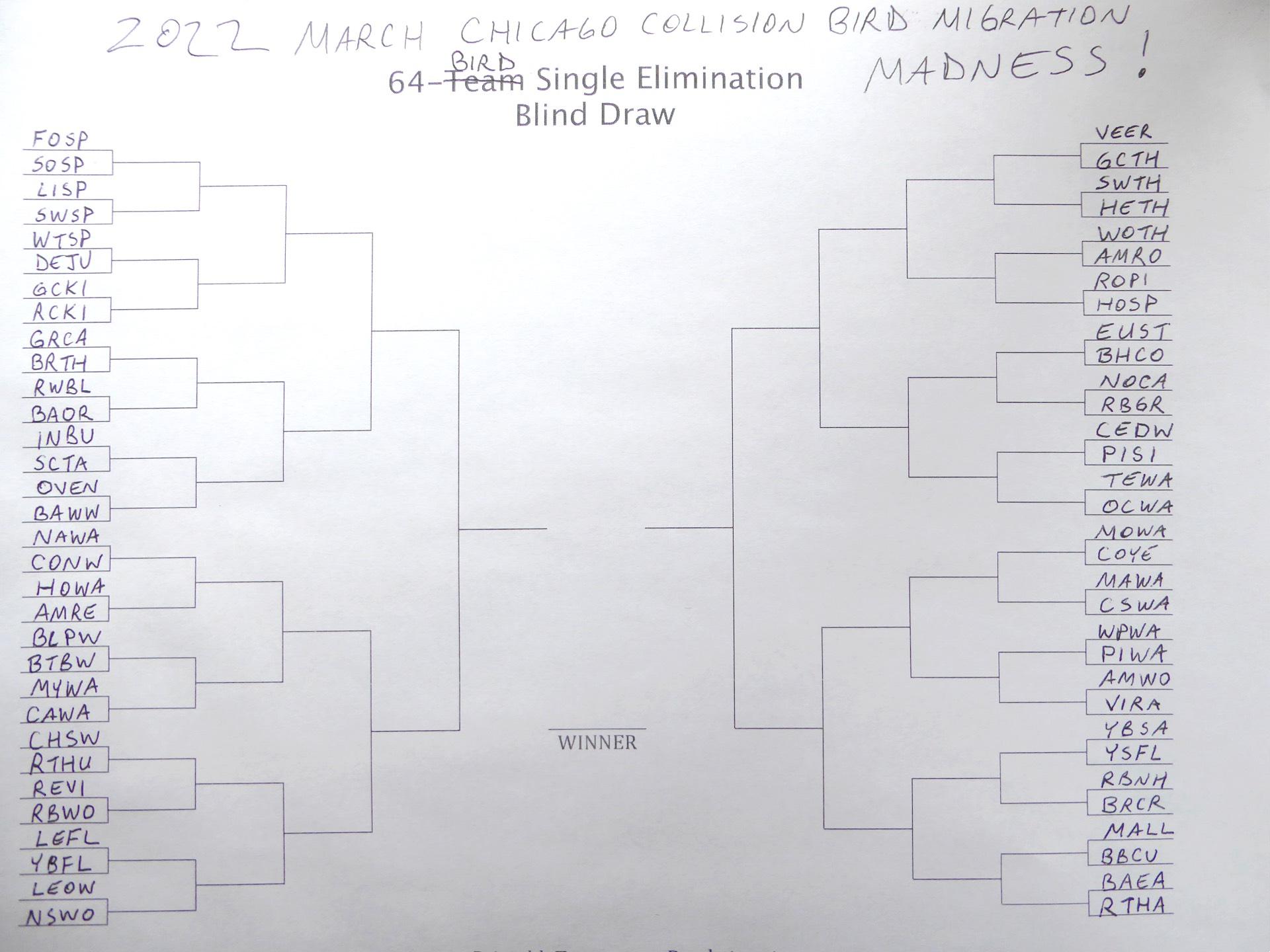 WTTW News: How important was it for you to present each bird as an individual creature?

Detterline: Going back to the idea that those of us working to mitigate bird collisions need to find ways to appeal to the general public, I thought that writing a narrative for each bird, personalizing where they came from and the specific hazard they now face, would be more effective at generating empathy then just putting a poll up on Twitter and saying, “Vote for your favorite bird!”

Birds have their own lives, they have things to do, and they have places to go. I like to mention how many offspring these collision victims could potentially have during breeding season to get people thinking about the generations of birds that have been and will be lost when a breeding bird dies in a window collision before they ever reach their breeding grounds.

The hope is that by giving collision birds a story and an individuality, people will feel more responsibility in protecting them.

WTTW News: How do you determine match-up winners?

Detterline: The winner of each matchup is determined by the votes on the Twitter poll. Some people just vote for their favorite bird, and some read through the narratives and really think about which bird has a better chance of avoiding the hazard they are faced with. In actuality, I set up the situations so that each bird has an equal chance of collision. I think the randomness of the voting establishing the winner reflects the randomness of which birds hit windows in real life. It could be a matter of which way a bird is facing when a person walks down the street that determines whether a bird will fly into a window or into a tree.

The winner of each matchup overcomes his or her particular challenge at that moment. But, of course, he’ll face another hazard in the next round, because for birds, navigating our city means facing one hazard after another.

I hope to turn the loser of each matchup into a teachable moment regarding what should and should not be done when a bird strikes a window, and also what can be done to prevent collisions. Most of the losers will be successfully rehabbed in the end, because I don’t want to make the game entirely depressing. But I will randomly choose a handful of birds that will not survive their collisions. It will be tough, but I think it’s important to reflect reality, and the reality is that most birds do not survive window collisions. That’s why it’s so important to make more people aware of this issue so that we can work together to prevent it.