Snowy Owls Are Rock Stars, But the ‘Paparazzi’ Treatment Has Some Debating Whether To Share Their Locations 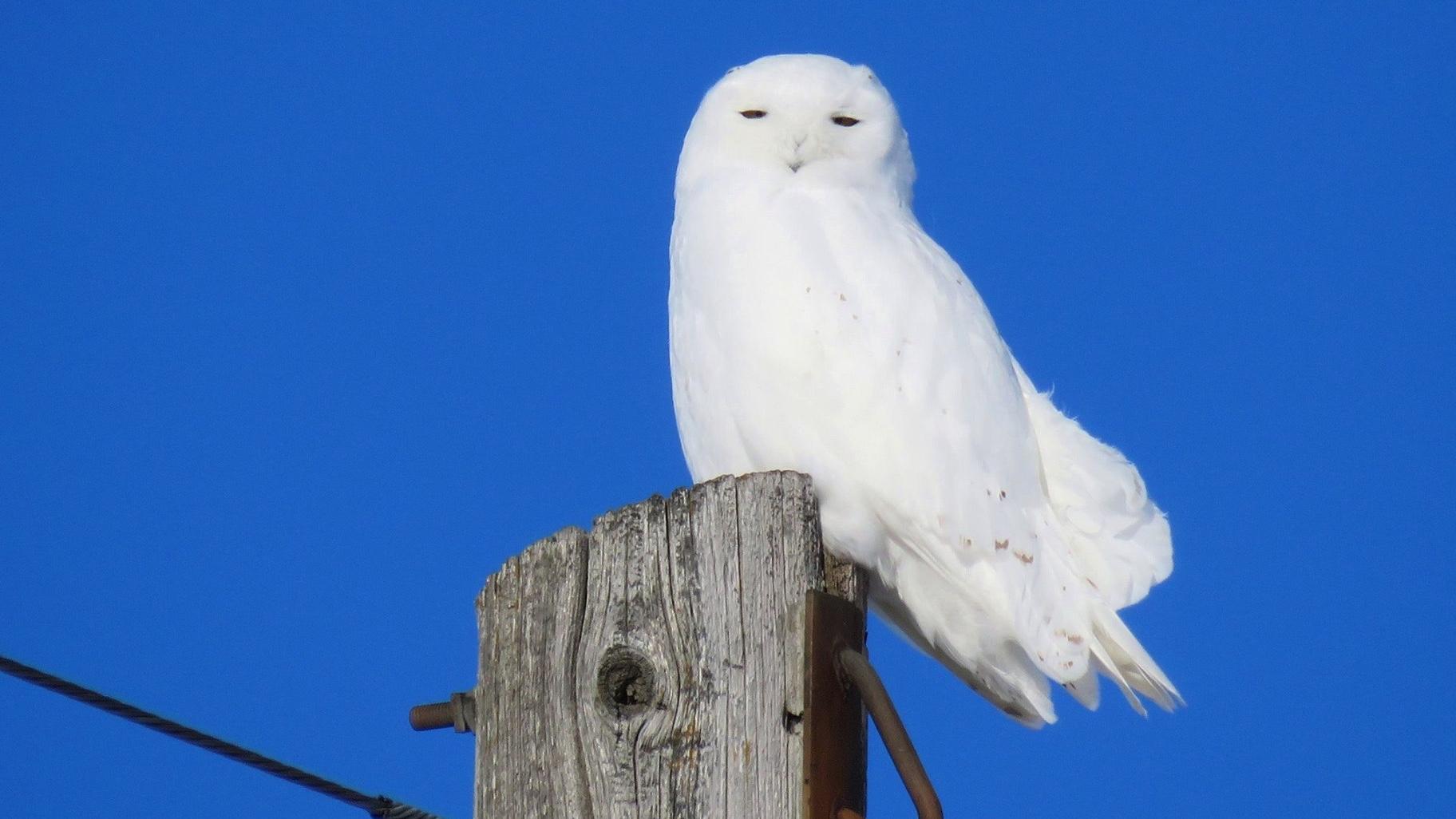 Snowy owls like to perch on fence posts and telephone poles. (U.S. Fish and Wildlife Service)

As improbable as it may seem, for some bird species heading south for the winter means a trip to Chicago.

Two of those visitors — the snowy owl and the long-eared owl — elicit the sort of reaction usually reserved for rock stars, treatment that includes the intrusion of cameras into their personal space.

So many people have encroached on the roosting site of a group of long-eared owls in a northern Cook County forest preserve, officials have set out “do not disturb” signs to discourage overly aggressive behavior.

“At times we’ve had some of our police officers and staff from the Department of Resource Management on site as well,” said Carl Vogel, spokesman for the forest preserves.

“I think most people really want to respect and protect the owls as much as they want to get a glimpse,” but some have gone too far, he said, including a few who tried to climb the tree where the owls were roosting.

This recent incident at the forest preserve, in which the owls were flushed from their roost, has reignited an ongoing debate within the birding community regarding whether or not owl locations should be shared publicly.

The issue, it should be noted, isn’t limited to Chicago. Rangers at Acadia National Park in Maine have had to remind visitors to “enjoy snowy owls at a distance.” Nor are owls the only birds in need of a “do not disturb” sign. The locations of bald eagle nests, for example, are usually a closely guarded secret.

On one side of the argument are those in favor of creating a big tent. Owls are so charismatic, the thinking goes, a sighting could be the spark that inspires someone to take up the hobby of birding and spend more time in nature. Why not encourage that?

At the opposite end of the spectrum are the folks who prefer a policy best described as “keep them secret, keep them safe.” This camp supports barring owl photos and locations from large public forums in order to protect the birds from curiosity seekers.

And then there’s the middle ground, which is where most people stand, said Edward Warden, president of the Chicago Ornithological Society.

“There’s various shades of gray. It gets really tricky,” he said. “The challenge comes in, who are you to tell someone, ‘Don’t go near that snowy owl?’” 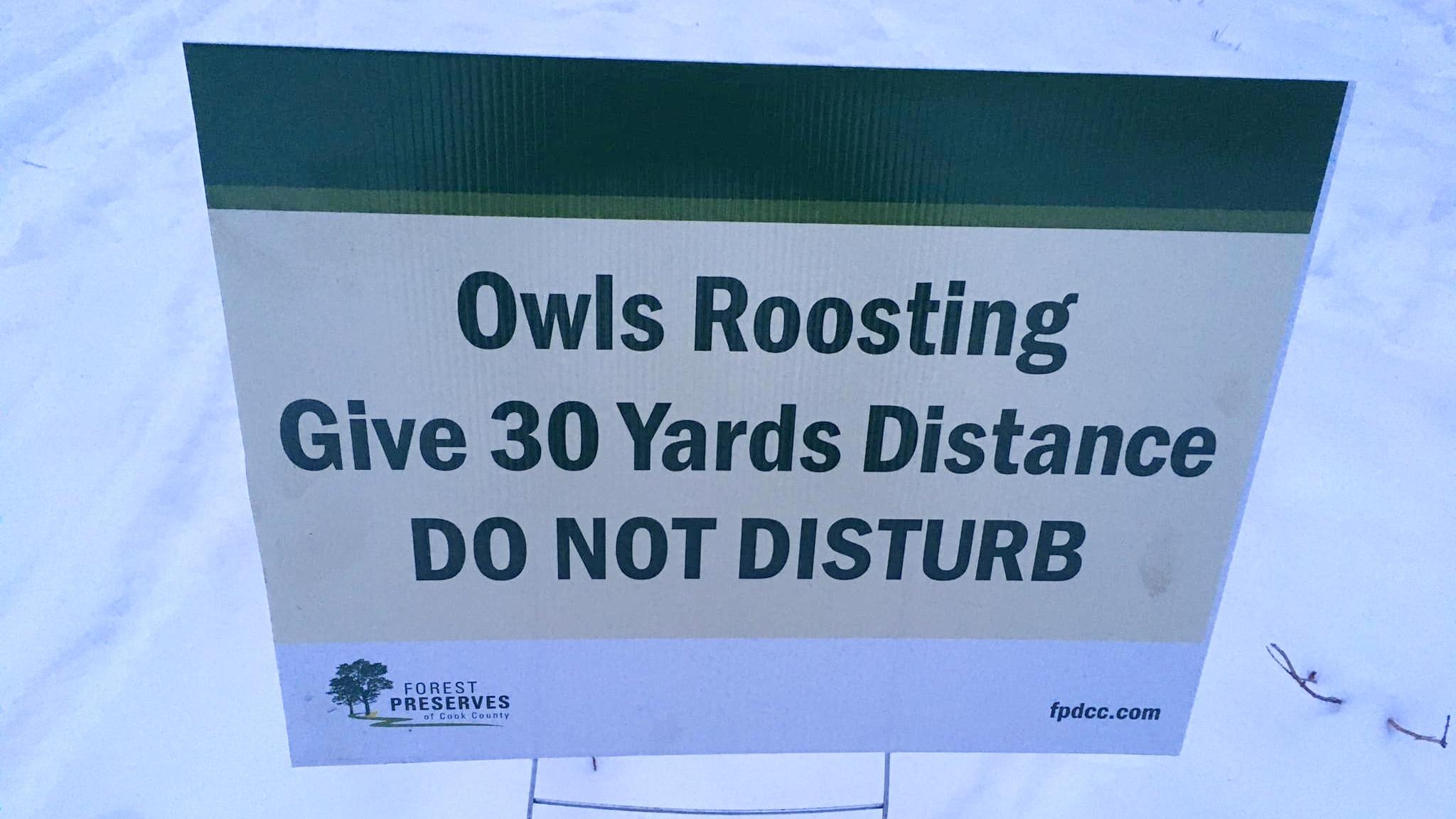 The Cook County Forest Preserve District has had to put out signs discouraging overly aggressive behavior from humans. (Facebook)

Whatever the reason, people have a fascination with owls.

“They just excite people of every rank, birdwatcher or not. There’s something about owls that make them absolutely insanely cool and irresistible to people,” Warden said. That goes for the region’s year-round owls like the great horned and eastern screech, but “snowy owls are that feeling on steroids,” he said.

With their white plumage (adult males that is, juveniles and females have flecks or bands of brown), yellow eyes, powerful movements and large size, snowy owls are something to behold.

These Arctic dwellers are known to irregularly dip down into Canada and the northern U.S. between November and March, searching for treeless areas that mirror the barren tundra of their breeding grounds, places like shorelines, open fields and even airports.

Because they tend to sit in the open or opt for highly visible perches like fence posts, telephone poles or grain elevators, snowy owls aren’t necessarily hard to spot if a person knows where to look. But that’s assuming it’s a snowy owl year to start with — their presence outside the Arctic is never predictable. Some years loads of them arrive in Chicago; this is known as an “irruption,” which scientists think happens following wildly successful breeding seasons, when there are more fledglings that spread out in search of food. Other years relatively few snowy owls turn up, and some years there are none at all. This variability is one of the reasons a snowy owl sighting carries such a “once in a lifetime” sense of excitement.

Cvetas remembers one year, he and his wife were shopping in the Loop and checking out Macy’s window display during the holidays when he got a tip about a snowy owl. Even his wife, who isn’t a birding enthusiast, said, “Let’s go!” 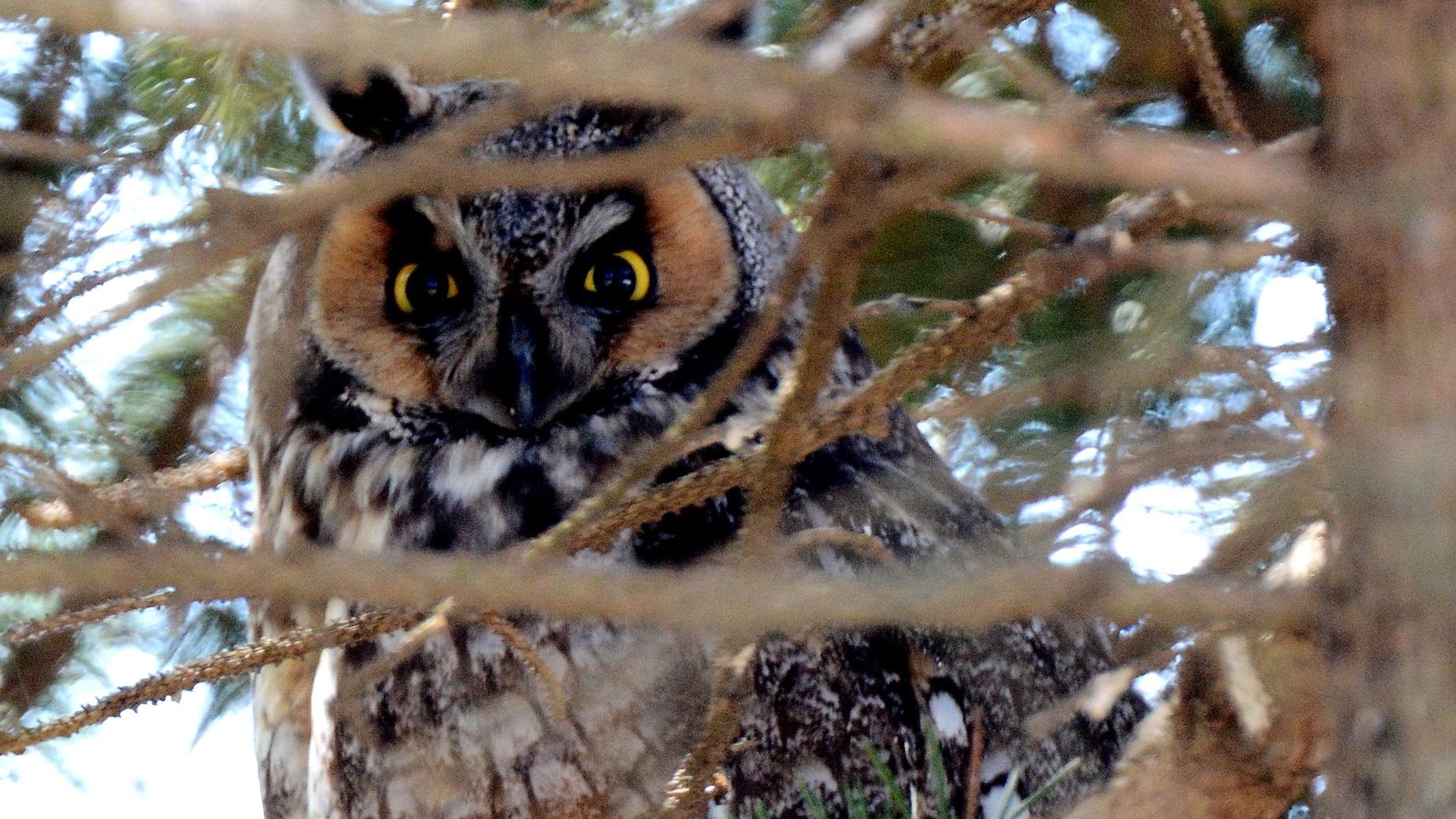 Long-eared owls are intriguing in a different way. They are plenty charming, to be sure, with ears like exclamation points and a face that suggests a state of perpetual surprise. But a big part of the long-eared’s allure is its reputation for being “secretive” and “superbly camouflaged,” to quote the Cornell Lab of Ornithology.

The birds are normally extremely difficult to detect amidst the dense foliage in which they take cover. But at their wintering locations, long-eared owls have a habit of roosting in large numbers, which makes them easier to find and also has the added benefit of rewarding birders with a view of not just one but several of this elusive species.

“That’s pretty thrilling,” said Cvetas. “I’ve been birding for 15 years, and I can count the number of roosts I’ve seen on one hand.”

Here’s where, as Warden put it, things get tricky.

Fifteen or 20 years ago, a birder may have spotted a snowy or long-eared owl, watched it for a while through a pair of binoculars, and then headed home with a cool story to tell, on the off chance anyone wanted to hear it.

Today, everyone’s got a camera in their pocket and the same scenario plays out far differently.

Someone snaps a picture of a snowy owl, posts it to social media — there are more than 160,000 photos on Instagram with the hashtag “snowy owl” — and the attention becomes magnified.

“All these photos go up, and a bunch more people want to know, ‘Where are they? Why can’t you tell me, you elitist birder guy?’” said Jeff Skrentny, a Chicago Ornithological Society board member.

It’s classic FOMO syndrome. But what are people afraid of missing out on? Is the interest in the bird or the photo op? And what’s the photo for? Is it to record a special personal moment or is it to collect an experience in order to boast about it? Does intention even matter? And who gets to be the gatekeeper?

There aren’t simple answers for birders, who are wrestling just like everyone else with unexpected side effects of technology and social media.

Guidelines from organizations such as the American Birding Association are helpful, but open to interpretation. The association’s code of ethics, for example, says to “share bird observations freely, provided such reporting would not violate other sections of this code,” presumably referring to cautions about approaching active nests or exposing birds to stress.

The International Owl Center is more explicit in its advice: “It is all too easy for these birds to be mobbed by photographers and other observers if locations are shared, especially on social media and birding websites. Although there is absolutely value in showing an owl to people who have never had the pleasure of seeing a wild owl, think very carefully about if the owl you have found is at risk of being loved so much it is functionally harassed by the public.”

“Each of us has to make those decisions. We need to be inviting, but we have to keep the birds safe,” Skrentny said.

For some, that might mean posting a photo to a private account with few followers. Or posting the image in a broader forum, but not revealing the owl’s location, or only referencing the county or even just the state. That can backfire by coming across as smugly playing cagey or even as “self-aggrandizing,” Cvetas said. Like, look what I got to see but you didn’t.

Others will only share an owl’s location with close friends, a trusted circle of birders or newcomers who’ve made it clear they’re serious about birds.

If there’s consensus to be had, it’s that respect for the owls is paramount, along with an understanding of their behavior. Find a book like “Guide to Owl Watching,” learn the signs, follow cues, said Skrentny.

For example, a roosting owl is a resting owl, trying to get some sleep. “They don’t want to fly during the day,” he said.

But to get the “perfect” photo of an owl in flight, some unscrupulous people will go so far as to scare the birds, play recordings of bird sounds or set out live bait to lure owls from their roost or perch. “That’s the darker side,” Warden said.

The danger to the owl is that it winds up expending precious energy it needs to conserve for hunting at night. Or worse, flushing an owl, particularly a smaller long-eared, makes it subject to predation.

“I’ve seen these things happen. It’s not hearsay, it’s real,” said Skrentny. “Even a four-pound snowy owl can get taken down by peregrines (falcons) working together.”

After the long-eared owls were flushed in the forest preserve, Skrentny, who’s an administrator of the Chicago Ornithological Society’s Facebook page, asked people to remove their owl photos, and stated the group wouldn’t publish such images going forward. It was a decision publicly praised in the post’s comments, Skrentny said, but privately there were some objections.

He defended his stance: “Our feed was just filled with these owl photos. We can’t be part of the problem.” 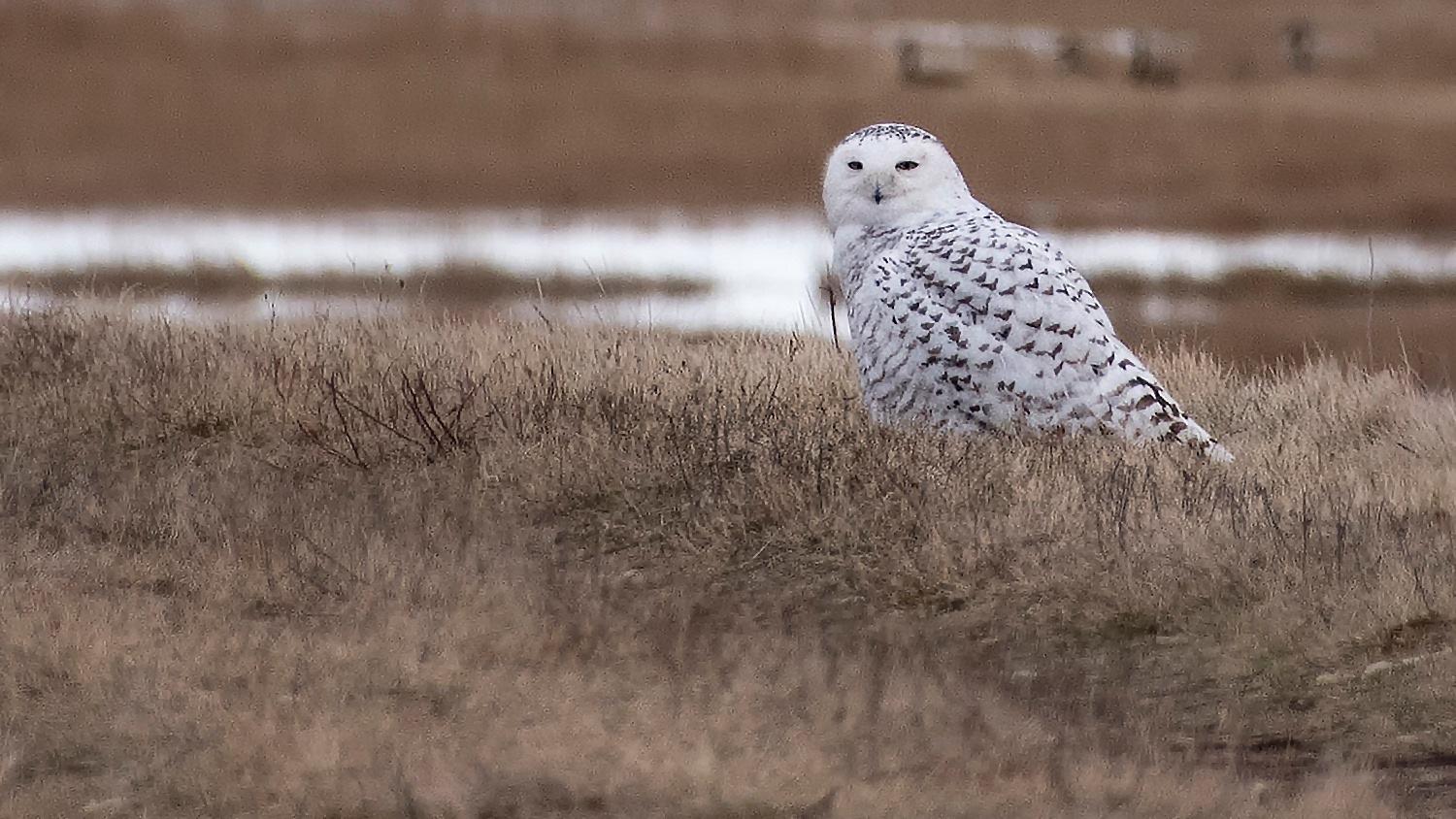 A few years ago, a pair of rare, endangered birds turned up on Chicago’s lakefront, the first sign of a breeding pair in decades. Those in the know debated whether to broadcast the information or keep it to themselves, fearing, for all of the reasons mentioned above, that harm might come to the birds if word spread. Would people flock to the site and stress the birds? Would they scare them away? Flush them? Trample them? Try to trap them?

In the end, the decision was made to share the news of the arrival of the piping plovers we all now know as Monty and Rose.

“The result was this massive community that rallied around the birds and people got to experience this incredible thing,” said Warden. “For the most part, that was a net gain.”

When it comes to visiting owls, there’s no simple solution like the roping off of a stretch of beach like what’s done for Monty and Rose. All of which means the debate over how to treat these guests isn’t likely to come to a definitive conclusion.