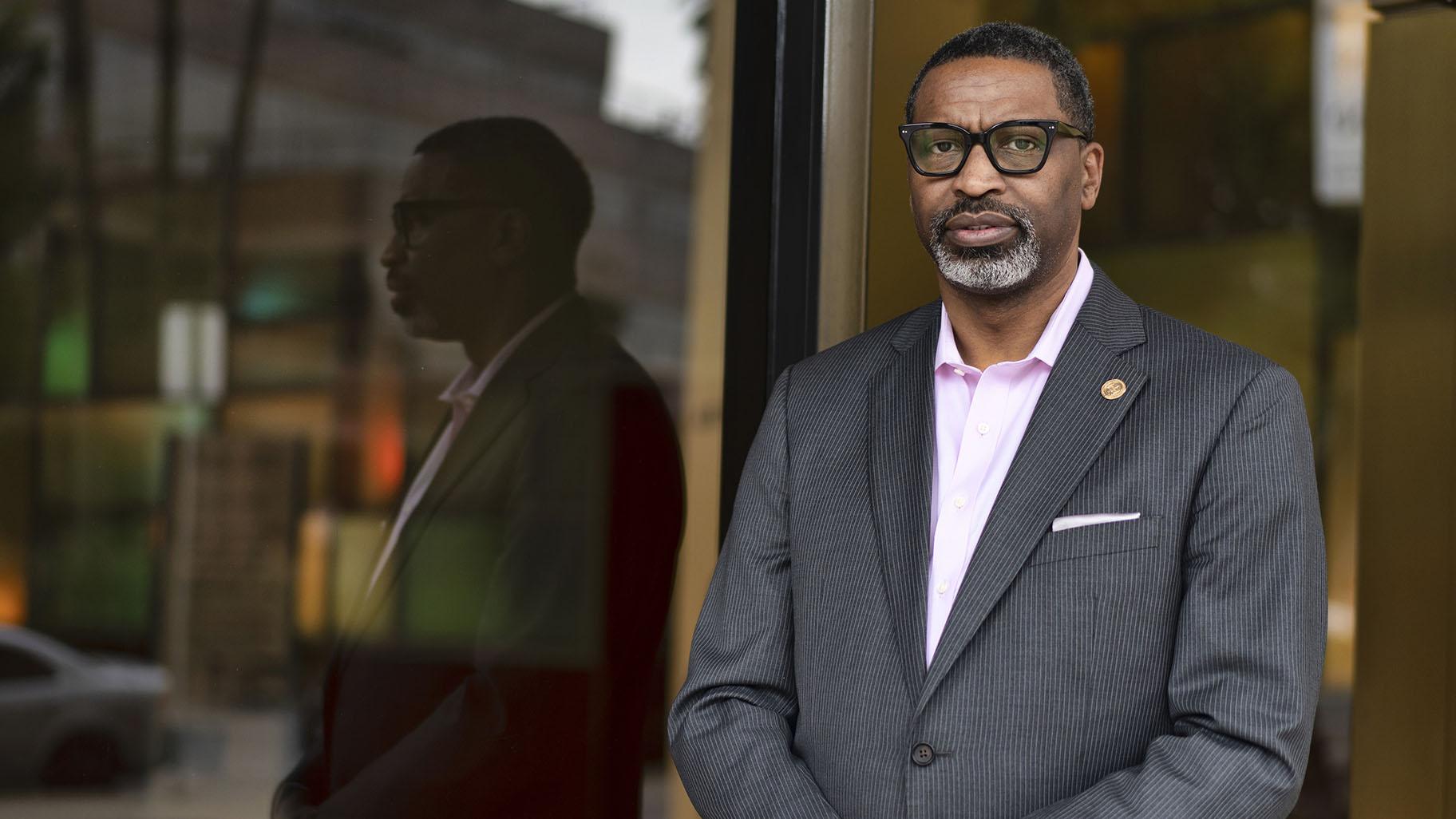 NAACP President Derrick Johnson poses for a photo on Saturday, Jan. 15, 2022, in Los Angeles. The NAACP, the nation’s oldest civil rights organization, will soon celebrate its 113th birthday, which its leaderships said comes as it undergoes a restructuring to reflect a membership and leadership that is trending younger. (AP Photo / Richard Vogel)

As the NAACP turns 113, look for its voice to grow louder on issues like climate change, the student debt crisis and the ongoing response to the coronavirus pandemic — while keeping voting rights and criminal justice reform at the forefront of its priorities.

The nation’s oldest civil rights organization’s birthday next month comes as it undergoes a restructuring to reflect a membership and leadership that is trending younger, to people in their mid-30s. As a result, it is adding endeavors like producing TV streaming content for CBS.

The hope is that younger Americans see the NAACP has modernized beyond being grandma and grandpa's go-to civil rights hub, good for much more than voter-registration drives and the star-studded Image Awards.

“We had to reinvigorate the organization,” national president Derrick Johnson, 53, told The Associated Press.

“The changes that we have seen are absolutely necessary for the organization to exist for the next 112 or 113 years,” he added. “But more importantly, we are more targeted in our work and are driven by outcomes as opposed to output.”

The NAACP’s legacy includes the legal desegregation of schools and workplaces, crusades against lynching and racial terrorism, and pursuit of socioeconomic advancement for Black Americans. It commands the respect of U.S. presidents and Capitol Hill powerbrokers, confers with U.N. diplomats on global issues and trains future leaders through its network of thousands of state and local branches.

But in periods of NAACP history when it found itself embroiled in financial hardship and internal power struggles, the group appeared ineffective or even irrelevant. Past critics have said the NAACP was insular, too concerned with corporate funding, and not nearly nimble or progressive enough for the times.

“The best of the NAACP is when it fought for change, not as payback for Black people voting for a candidate, but because the change was demanded by the promises of the constitution, the demands of human rights and the sound morality of our deepest religious traditions,” said the Rev. William Barber II, who led the North Carolina NAACP from 2006 to 2017 before resigning to become co-chair of the Poor People’s Campaign.

“Right now, the NAACP should be leaning to its better history,” Barber told the AP.

A revamped “brain trust” within its leadership is helping to better meet the needs of its membership, said NAACP chief strategy officer Yumeka Rushing. During a December national staff retreat, roughly half of those in attendance had come onboard in the prior 12 months.

“There is not another organization like us, in terms of the footprint that we have around the country,” Rushing said. “The restructuring happened at a time when the country needed us the most, to stand up and speak to the issues.”

Johnson said there is no issue more important to the NAACP than the fight to enhance voter protections. With the Senate missing this week's Martin Luther King Jr. Day deadline to pass Democrat-backed legislation, the NAACP president issued a grave warning to lawmakers of both parties.

“Anything short of protecting the right to vote is a death sentence for democracy. The fight is far from over,” Johnson said after a Wednesday night Senate vote.

Johnson told the AP the organization’s strategy on voting rights isn’t just about preserving Black voters’ influence in national elections. Following the release of 2020 census data, the NAACP has filed lawsuits against state redistricting plans in Texas, Georgia and Illinois that would limit voters’ choices in elections.

“It’s more about having a true representative democracy,” he said.

Until about a decade ago, it had been easier to find bipartisan support for voter protection measures. In a 2006 speech to the NAACP’s national convention in Washington, former Republican President George W. Bush affirmed his support for Congress’ reauthorization of the landmark Voting Rights Act of 1965.

“President (Lyndon) Johnson called the right to vote the lifeblood of our democracy,” Bush said. “That was true then, and it remains true today.”

Paris Dennard, a spokesman for the Republican National Committee, said the NAACP and the GOP have historically been aligned on several civil rights issues, including criminal justice reform, election integrity and financial support for historically Black colleges and universities.

“The NAACP is supposed to be nonpartisan, so we’re always seeking areas of alignment on a host of issues,” Dennard said. 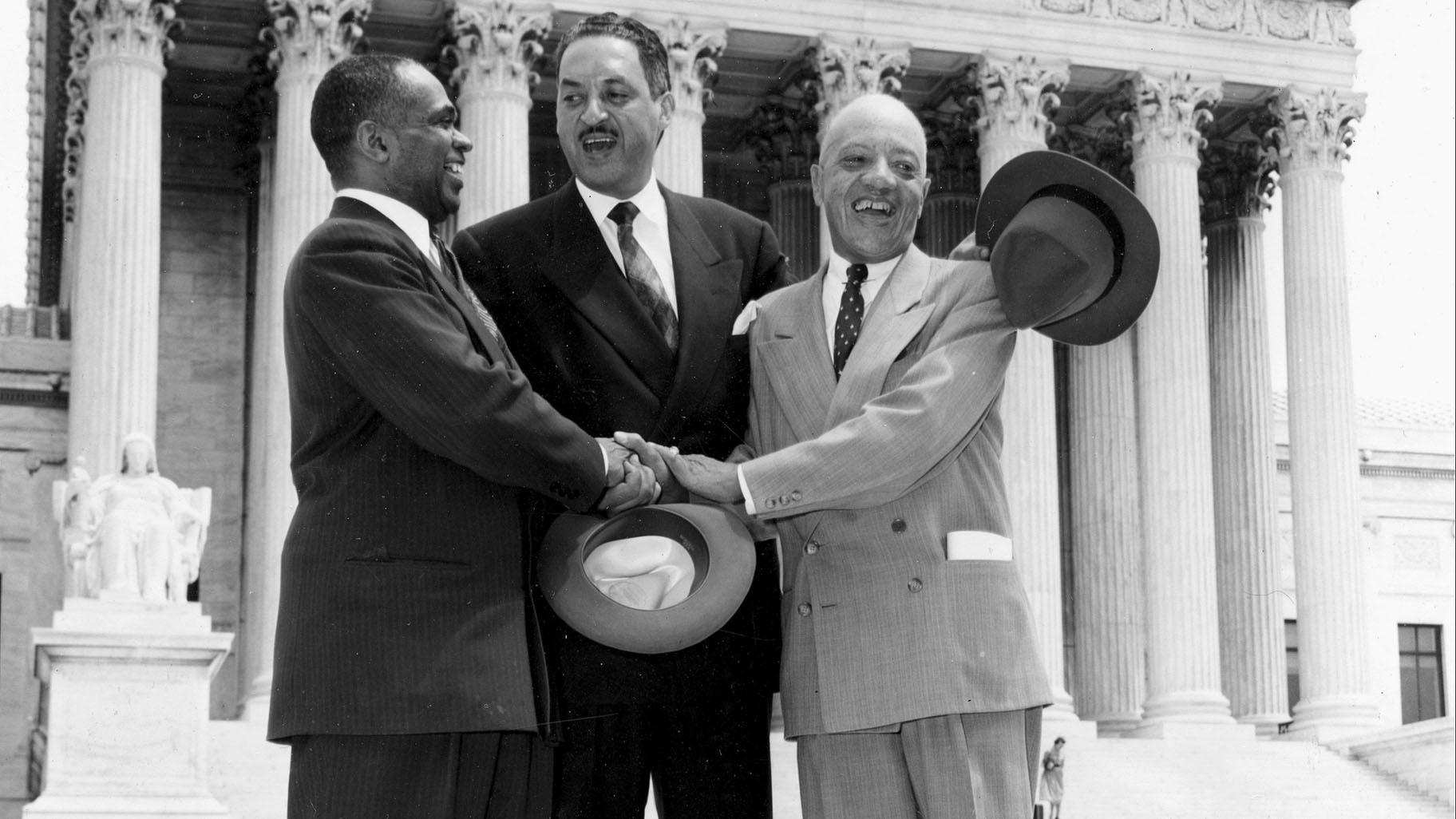 George E.C. Hayes, from left, Thurgood Marshall and James M. Nabrit join hands as they pose outside the Supreme Court in Washington on May 17, 1954. The three lawyers led the fight for abolition of segregation in public schools before the Supreme Court, which ruled that segregation is unconstitutional. (AP Photo, File)

Founded on Feb. 12, 1909, the National Association for the Advancement of Colored People was formed as the nation struggled to build a post-abolition multiracial democracy amid violence against Black people. Its white founders, a group of activists and journalists that included Henry Moskowitz, Mary White Ovington and William English Walling, joined with like-minded Black activists — W. E. B. Du Bois, Mary Church Terrell and Ida B. Wells, the noted journalist who investigated lynching in America.

The NAACP Legal Defense and Educational Fund, founded as a part of the NAACP in 1940, litigated the landmark Supreme Court case Brown v. Board of Education mandating the desegregation of public schools in 1954, as well as a case permitting affirmative action in college admissions decades later. In 1957, the NAACP LDF became a separate entity.

Today, the NAACP has more than 2,200 branches, including in colleges and prisons, and 2.2 million members. Even amid the rise in popularity of the Black Lives Matter movement, youth membership jumped significantly from 12,000 in 2019 to more than 17,000 by the end of 2020, according to Wisdom Cole, the NAACP’s youth and college division director.

“The NAACP continues to be the preeminent civil rights organization in the country,” said Randal Maurice Jelks, professor of African and African-American studies at the University of Kansas. “It set up a bureaucracy to be able to handle the ongoing, critical changes that we face.”

When other organizations have burned out, the NAACP is well positioned to endure, Jelks said. “And that is to the credit of its initial organizers.”

The NAACP operates two c3 nonprofits and two c4 nonprofits, as well as a for-profit arm. Its Hollywood bureau pursues representation and equity issues across the entertainment industry, while its legislative and policy bureau in Washington lobbies lawmakers on NAACP priorities. A full service law firm, staffed with seven attorneys, works with a network of lawyers across the country, allowing the organization to litigate between 30 and 50 cases at any given time.

With tens of millions of dollars in assets across its entities as of 2020, Johnson said the NAACP’s finances are healthier than at any time in its existence.

Johnson said his involvement with the NAACP began in 1990. Until his 2017 appointment as president and CEO, he volunteered in his home state of Mississippi in a number of capacities, including as state conference president.

His elevation to leadership has not been without challenges. In 2020, a former North Carolina NAACP official filed a $15 million lawsuit against the national organization after she accused her boss of sexual harassment and NAACP leadership of inaction.

Johnson told the AP he has grown as a leader by relying on the wisdom of the organization's elders and the counsel of its young people.

“I have been able to apply lessons learned, good and bad,” Johnson said. "As I navigate in this moment, I see the relationships built over time are now coming full circle.”

He has fans within the Biden administration. President Joe Biden and Vice President Kamala Harris are longstanding NAACP members who “work closely with the organization to advance their shared commitment to equal rights,” a White House official said.

“If he doesn’t have a seat at the table, he brings one,” Fudge told the AP. “He makes himself relevant by going to the tables where he may not have been invited.” 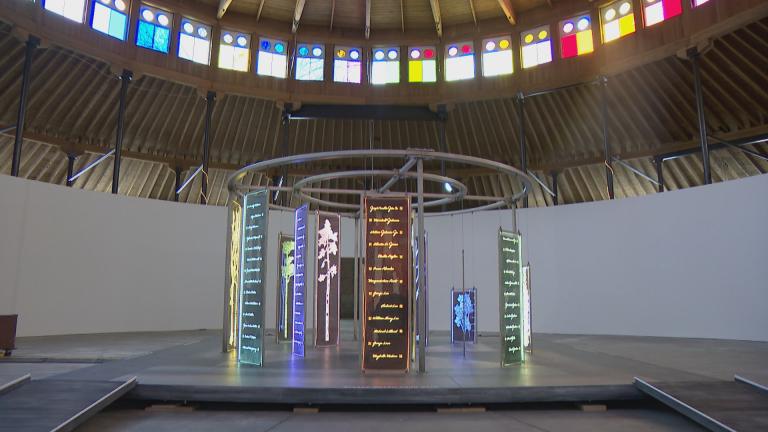