Discovery is central to the work of an artist who seeks and finds all kinds of things on the shores of Lake Michigan. John Soss makes artwork out of seemingly nothing, sifting the sand for debris left by people and nature.

Marc Vitali: He creates compelling compositions that document a place, suggest an idea, or make a visual pun. For John Soss, it always starts with a visit to the beach. We met at Foster Beach on a windy, 35 degree December morning.

John Soss, artist: Two parts of my mind are working when I’m walking along the beach, one of which is, yeah, I am searching for stuff and my eyes are kind of tuned in to what’s on the ground, different shapes and colors.

But I also do find it a meditative thing. I like to sort of work things out in my head, think about current events, what happened yesterday, what might happen today, maybe just workout some of the messy stuff that happens in life. 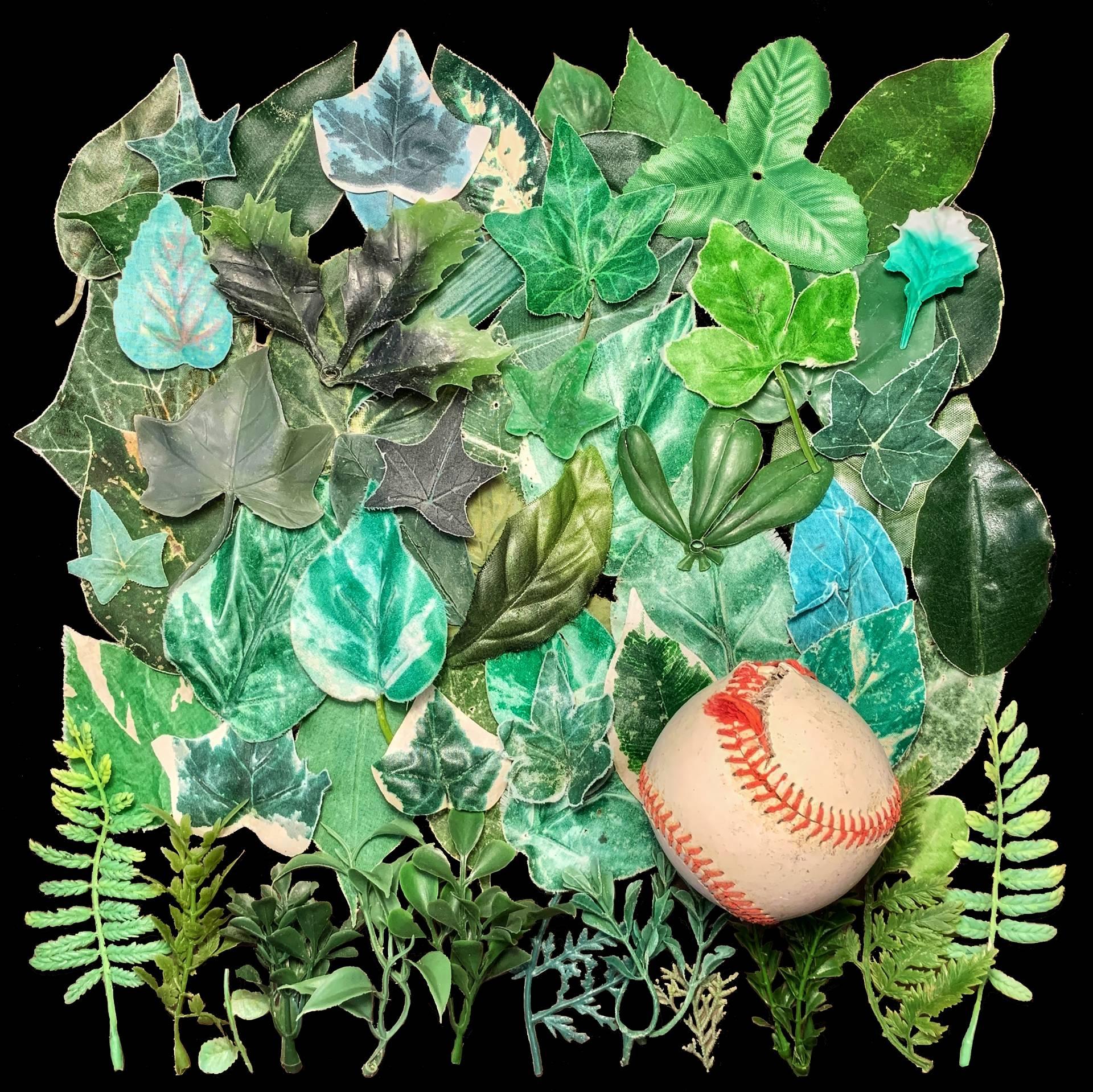 Vitali: Soss carefully arranges the things he finds. He photographs the assemblage with his iPhone. And he prints the pictures on recycled aluminum. He hunts for his unexpected treasures year-round.

Soss: There are times when I feel like I’m really in the elements. There’s heavy winds and big waves and sometimes the sand blows across the surface of the ground and ya know gets right at you. So I kind of like the experience of being in all the seasons and feeling what that feels like to be out there, you know? You can’t feel that in your neighborhood or your house.

Vitali: The project started nearly 10 years ago, when he shared his photos with family. Then he got noticed on social media and now he has his second show at The Dime, artist Tony Fitzpatrick’s gallery. 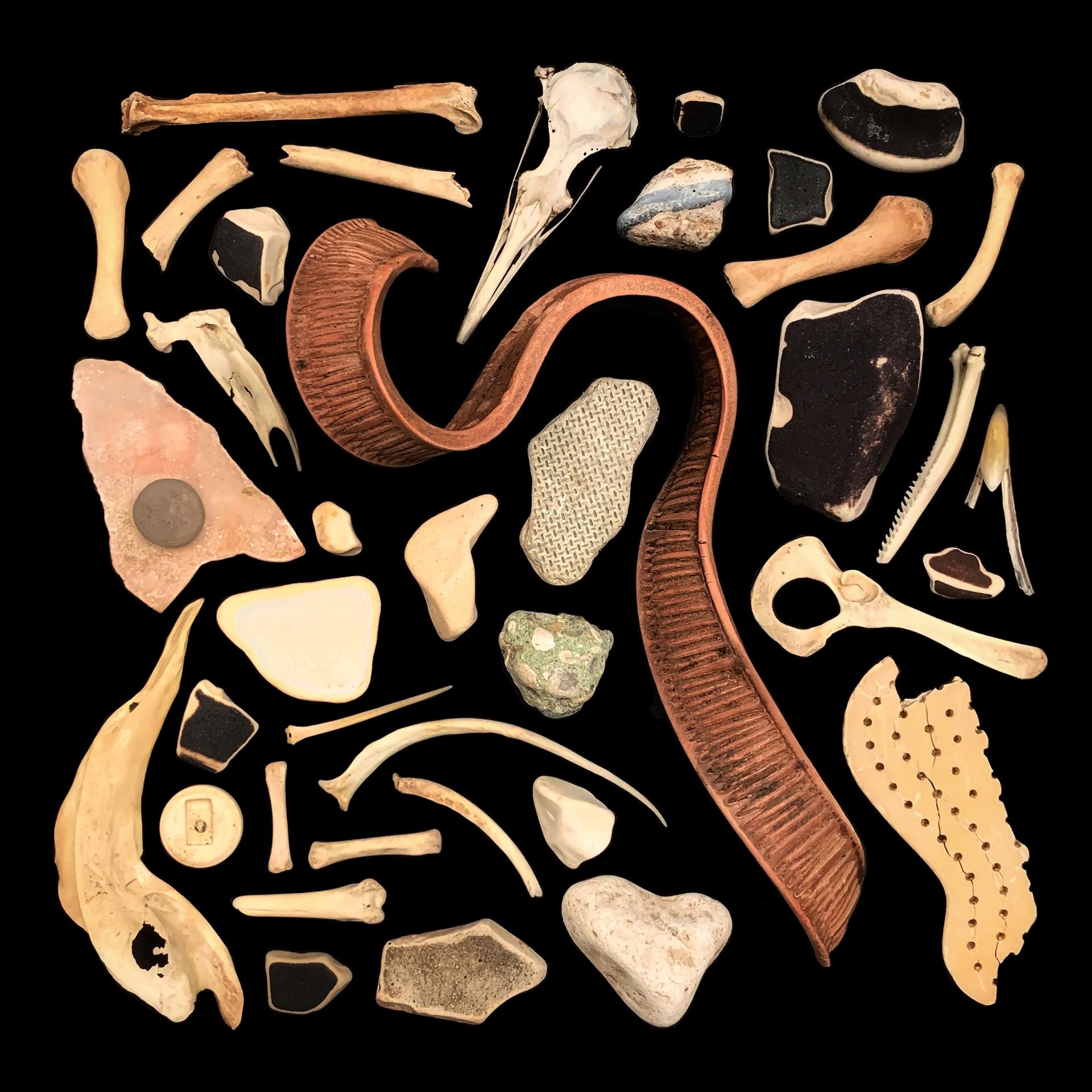 Tony Fitzpatrick, artist: It took me a few years to convince John Soss that he’s an actually an artist, you know? It’s this ongoing artistic dialogue between him and that lake, and it tells us a lot about “We the People,” tells us a lot about what we keep, what we revere, what we discard.

Vitali: Every walk along the lakefront yields material for the next artful display of stuff that might include fireworks or children’s toys or something more ominous. 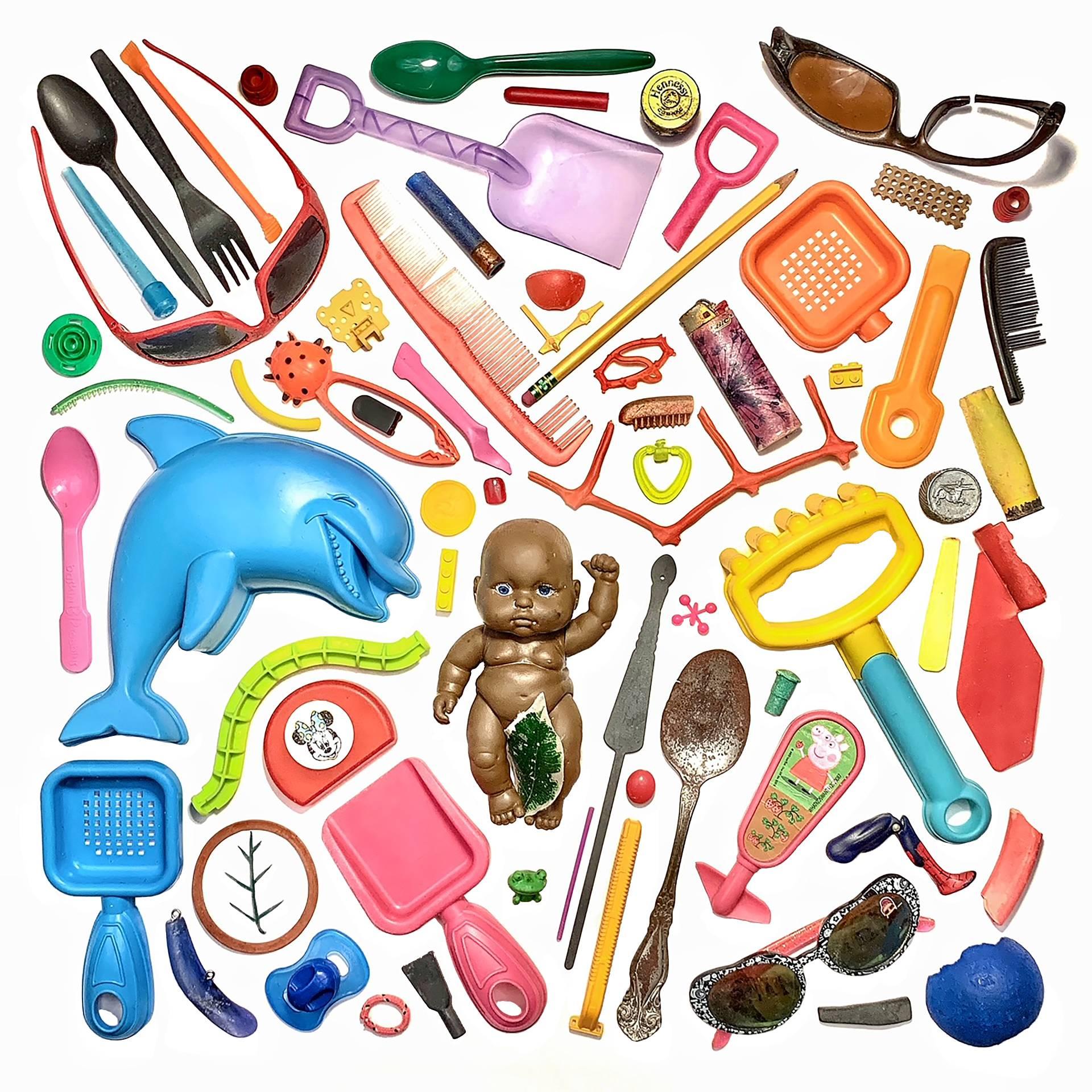 Soss: When I get home, I’m looking at things on my work table, as I put them together it’s as if I am putting a puzzle back together based on all the things that I found. So I do try to fit things into place alongside of each other, you know a curved piece by a curved piece, a straight edge by something else that compliments it.  And the goal is to try to make it all fit within a square, based on what I found that day.

I also like the fact that a lot of those things, if you’re talking about driftwood or peach pits or walnuts or bird feathers, they all were once something that was alive. And now they’ve just been left on the beach and so I like the idea of giving them life again by putting them back together in what maybe is an attractive photograph.

Vitali: Soss is relatively new to making art but he frequently works with artists – recording artists. He works for Jam Productions, the Chicago-based concert promoter.

Soss: I don’t want people to think that I’m some lonely old man who walks around and picks up litter off the beach. I’m very much engaged when I’m on the beach, you know. I’m looking for things and thinking about things and I’ve got maybe some music in my earbuds and there’s a meditative quality to it. I get a lot out of it. It’s a pretty great ritual.

The exhibition is called “On the Beach.” It’s at the art gallery called “The Dime” in Humboldt Park.