A NASA mission to deflect an asteroid – it’s been the premise for more than one Hollywood movie – but next month NASA launches its DART mission that aims to do it for real.

Below, an edited interview with Hammergren.

NASA’S DART Mission – the DART stands for Double Asteroid Redirection Test – sounds like a Hollywood movie. Explain what NASA intends to do here.

Hammergren: The DART mission aims to literally go to an asteroid, smash into it, and change its course a very little bit. It’s not a great big mission. It’s not a great big spacecraft, so it’s not going to completely change this asteroid’s orbit, but it’s going to alter its trajectory. And specifically when I say it, this is a binary asteroid, it’s an asteroid with its own moon and this mission is going to smash into the moon of the asteroid and change its course around its parent asteroid by just a little bit. But by a measurable amount.

In terms of the purpose of this, is this simply just to demonstrate that NASA can actually change the course of an asteroid, should it need to?

Hammergren: That’s really kind of the big symbolic goal. But the scientific goal is to measure first of all what the response of the asteroid is to the impact because this technique – smashing a spacecraft into an asteroid – really is our best shot at changing the course of any kind of hypothetical, potentially hazardous asteroid. So, by actually testing it, seeing what the response of the asteroid is ... how much momentum is transferred to the asteroid – all of this is really kind of unknown. We can model it but putting it into practice is going to be essential before we have to do this if one is coming our way.

And this will only have a small impact on the asteroid’s orbit. Will that be enough in the event we really need to avoid an asteroid collision with Earth?

Hammergren: Small changes do add up over time. If we just change the speed of the asteroid by even something as low as maybe even a few millimeters a second, then that adds up over time. That’s a change in velocity. So you just multiply that by the time period – by the lead time you might have before an upcoming impact – all you have to do is get the asteroid to miss the Earth by a few thousand miles. If you have enough time, you can do that with the tiniest push.

Sticking with asteroids, NASA is also set to launch its Lucy spacecraft to Jupiter’s Trojan asteroids. What makes this mission special?

Hammergren: The Lucy mission’s targets are the Trojan asteroids. These are asteroids that share Jupiter’s orbit and most of them are so-called primitive asteroids that appear to be made of materials that have been stuck in a deep freeze far away from the formation of the solar system. So we believe that they are a repository of the conditions and the materials that the original solar system was formed of. By looking at them up close, we should get an evolutionary history of the small bodies of the solar system.

The key point is that we have been learning over the past several decades is that the history of the solar system is far more complex than we previously imagined. And we are still just really gaining insights into the restructuring and the reordering of the solar system – of the planets – that went on in the very early history of formation. We have strong reasons to believe that the giant planets – Jupiter, Saturn, Uranus and Neptune – all changed their positions in the early times after their formation that they continued to evolve, they continued to change their positions. And because these giant planets have immense gravities and they’d be traveling through these swarms of asteroids and comets, all of that has a great effect on the history of the inner planets, including the Earth of course, and potentially previously habitable planets like Mars and Venus. 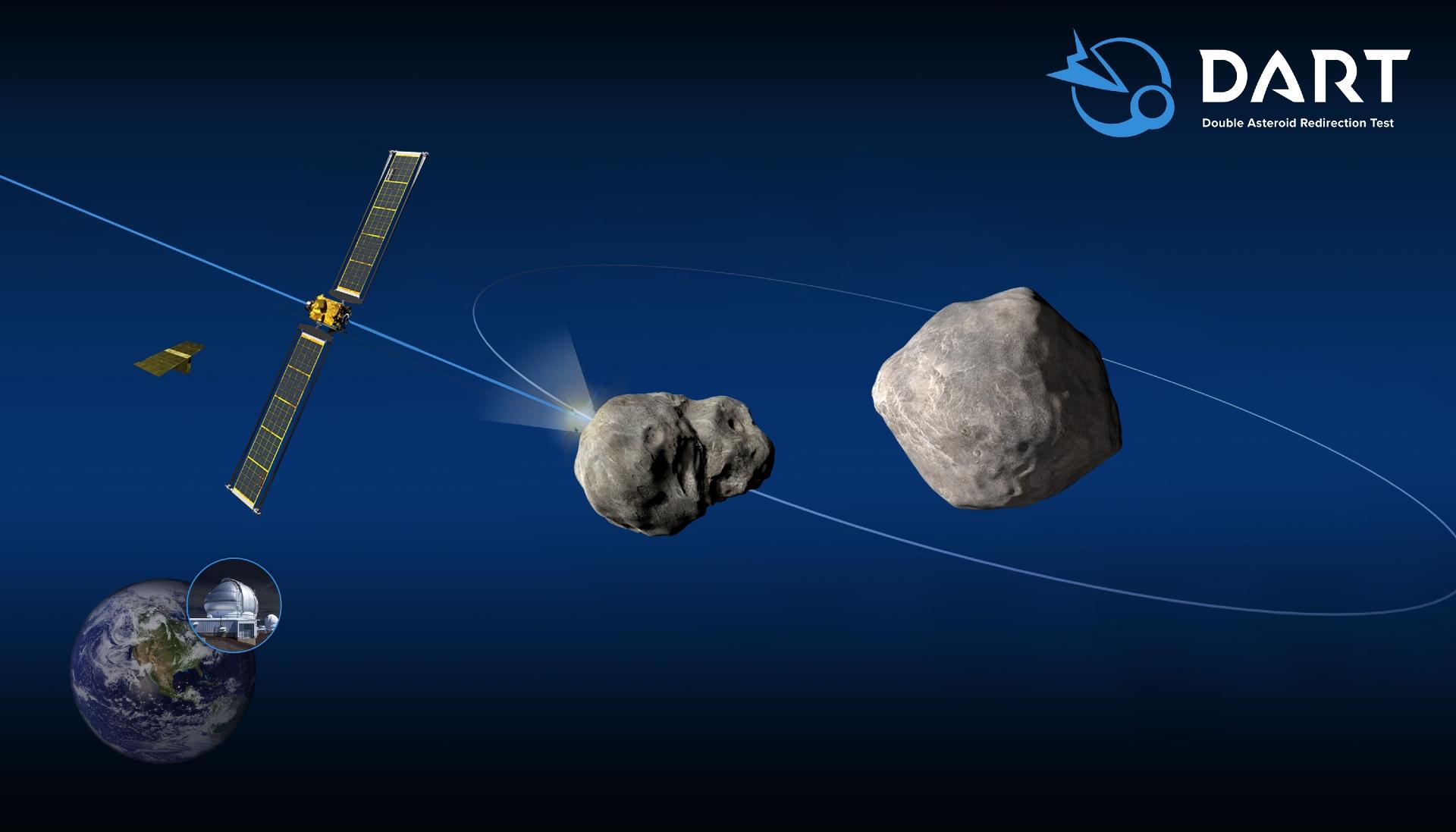 Schematic of the DART mission shows the impact on the moonlet of asteroid (65803) Didymos. Post-impact observations from Earth-based optical telescopes and planetary radar would, in turn, measure the change in the moonlet’s orbit about the parent body. (Credit: NASA / Johns Hopkins Applied Physics Lab)

Perseverance’s mission to Mars is learning more about the Jezero Crater that the Mars rover is exploring and its past history. What have we learned?

Does that ultimately mean we are in the right place to look for evidence of ancient life?

Hammergren: Well yes. We will have no idea until they actually find something, but it does look like especially in the lower layers of the rock there that there were relatively slow, steady waters hanging around in the lake for long periods of time. And that kind of gentle sedimentation is where we would expect to find traces of organics if not fossils.

And this is basically just by studying the geology of the rocks and seeing the sedimentary layers and then also finding these random boulders that could have only been carried there by a flash flood event. Right?

Hammergren: Absolutely. The layers of the rock strata … are literally like pages of a book. And they are laid down sequentially. And then you can have flash floods come in and deposit big boulder and large rocks. And by looking at how big those rocks are, and knowing from studies here on Earth, we can figure out how massive those floods were. How swift was the water that ran through that river. It’s really just geology. It’s a plain old regular geology that we have here on Earth applied to a setting on Mars. It’s wonderful.