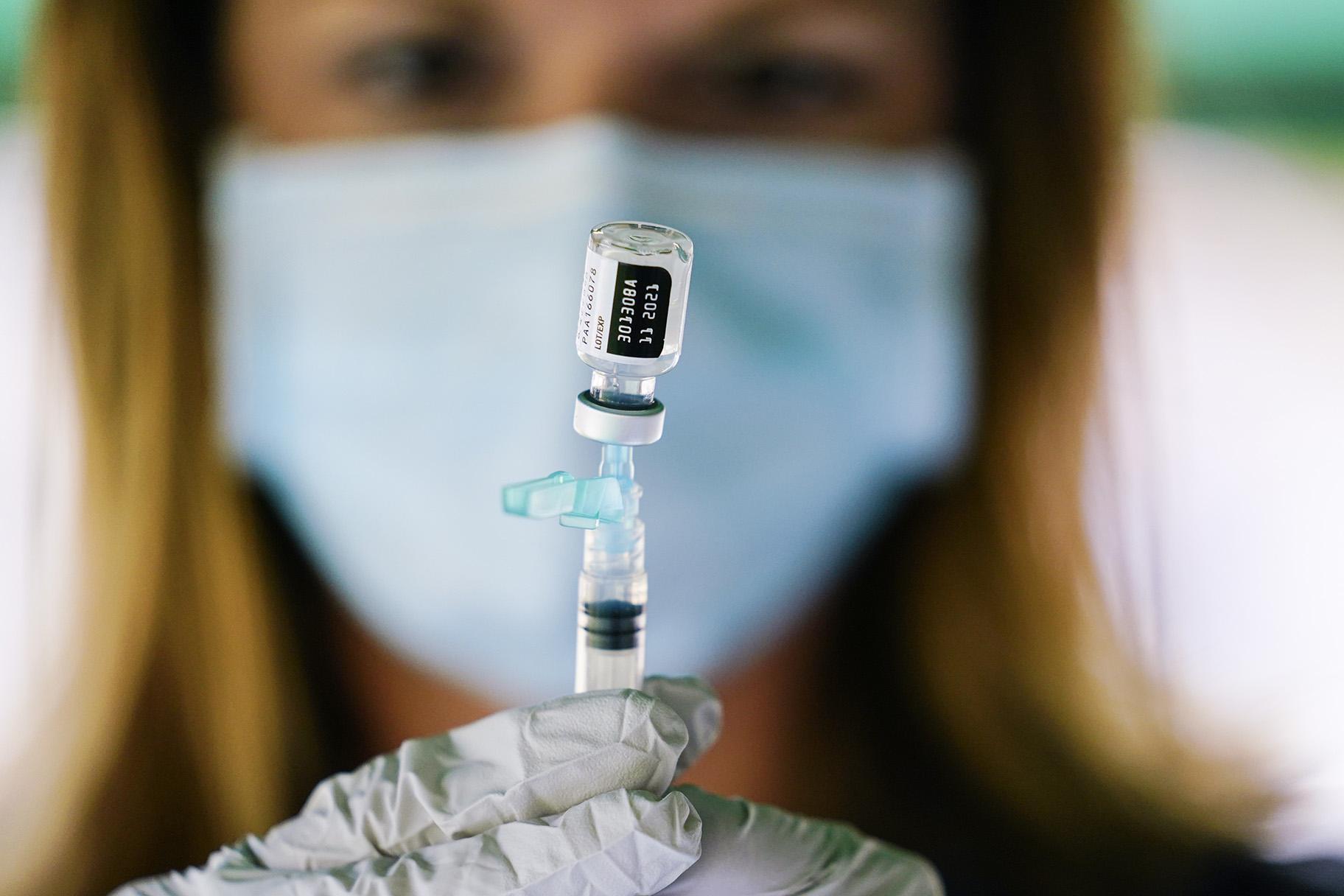 In this Sept. 14, 2021, file photo, a syringe is prepared with the Pfizer COVID-19 vaccine at a clinic at the Reading Area Community College in Reading, Pa. (AP Photo / Matt Rourke, File)

COVID-19 deaths and cases in the U.S. have climbed back to where they were over the winter, wiping out months of progress and potentially bolstering President Joe Biden’s argument for his sweeping new vaccination requirements.

The cases — driven by the delta variant combined with resistance among some Americans to getting vaccinated — are concentrated mostly in the South.

While one-time hot spots like Florida and Louisiana are improving, infection rates are soaring in Kentucky, Georgia and Tennessee, fueled by children now back in school, loose mask restrictions and low vaccination levels.

The dire situation in some hospitals is starting to sound like January’s infection peak: Surgeries canceled in hospitals in Washington state and Utah. Severe staff shortages in Kentucky and Alabama. A lack of beds in Tennessee. Intensive care units at or over capacity in Texas.

The deteriorating picture nine months into the nation’s vaccination drive has angered and frustrated medical professionals who see the heartbreak as preventable. The vast majority of the dead and the hospitalized have been unvaccinated. That has proved to be a hard lesson for some families.

“The problem now is we have been trying to educate based on science, but I think most of the education that is happening now is based on tragedy, personal tragedy,” said Dr. Ryan Stanton, an emergency room physician in Lexington, Kentucky.

In Kentucky, 70% of the state’s hospitals — 66 of 96 — are reporting critical staff shortages, the highest level yet during the pandemic, the governor said.

“Our hospitals are at the brink of collapse in many communities,” said Dr. Steven Stack, Kentucky’s public health commissioner.

The U.S. is averaging over 1,800 COVID-19 deaths and 170,000 new cases per day, the highest levels respectively since early March and late January. And both figures have been on the rise over the past two weeks.

The nation is dispensing about 900,000 shots of the vaccine per day, well below the peak of 3.4 million a day in mid-April. On Friday, a Food and Drug Administration advisory panel will meet to discuss whether the U.S. should begin dispensing booster shots of the Pfizer vaccine to shore up people’s protection.

On a positive note, the number of people now in the hospital with COVID-19 appears to be leveling off or even declining at around 90,000, or about where things stood in February.

The outbreak in the U.S. topped out in January at an average of about 3,400 deaths and a quarter-million cases per day. That was just weeks into the nation’s vaccination drive. A precipitous drop followed, extending into the spring before creeping back up with the rise of the more contagious delta variant.

Last week, the president ordered all employers with more than 100 workers to require vaccinations or weekly tests, a measure affecting about 80 million Americans. And the roughly 17 million workers at health facilities that receive federal Medicare or Medicaid also will have to be fully vaccinated.

“We read about and hear about and we see the stories of hospitalized people, people on their deathbeds among the unvaccinated over the past few weeks,” Biden said in announcing the rules. “This is a pandemic of the unvaccinated.”

The requirements have met with resistance and threats of lawsuits from Republicans.

Stanton , the ER doctor in Kentucky, said he has admitted families where the delta variant has swept through generations, especially if the older members are unvaccinated.

“Now in Kentucky, one-third of new cases are under age 18,” he said. Some children brought it home from summer camp and spread it to the rest of the family, and now, “between day care and schools and school activities, and friends getting together, there are just so many exposures.”

In Alabama, hundreds of COVID-19 patients fill intensive care units, and hospital staff in one facility contacted 43 other hospitals in three states to find a specialty cardiac ICU bed for Ray Martin DeMonia. It wasn’t fast enough. The 73-year-old died Sept. 1. And his family made a plea in his obituary.

“In honor of Ray, please get vaccinated if you have not, in an effort to free up resources for non-COVID related emergencies,” his obituary read.

In Hidalgo County, Texas, along the Mexican border, about 50 patients were in the hospital with COVID-19 on a given day in July. By early August, the number had soared to over 600.

“Back in July we were almost celebrating. Little did we know,” said Ivan Melendez, public health authority for Hidalgo County. The situation has improved somewhat, with just under 300 people hospitalized for COVID-19 on Monday, but ICUs are still above 90% capacity, Melendez said.

“We have not turned the corner,” Melendez said. “Double digits of people, double digits are dying every day.”

The biggest surge over the summer occurred in states that had low vaccination rates, particularly in the South, where many people rely on air conditioning and are breathing recirculated air, said Linsey Marr, a professor of civil and environmental engineering at Virginia Tech.

Heading into colder months, states farther north with low vaccination rates, especially in the Midwest, are likely to see upticks.

“We’re cresting the peak right now, but I don’t think it’s going to come all the way back down,” Marr said. “I think it’s going to kind of stay at the simmering level as it works its way through the unvaccinated population in the other states. And it’ll work its way north because in the wintertime, people are heating and then you get that same issue of recirculating the air indoors.”

Vaccination rates are not as low in some of the Northern states, but “there’s still a lot of unvaccinated people out there. Delta is going to find them,” Marr said.

And vaccinated people are still not in the clear. Shri Amarnath said her father got sick during a business trip to Georgia just before his Aug. 31 retirement and had to miss his last day of work and retirement festivities.

After he had been symptom-free for 48 hours, the family left for a lake house in Tennessee. Everyone was vaccinated. But Amarnath’s mother started feeling sick during the trip and has now tested positive.

Everyone else is quarantining and planning to get tested or retested, said Amaranth, who lives in Indianapolis.

“Everyone is kind of like on alert, waiting to see who’s next,” she said.