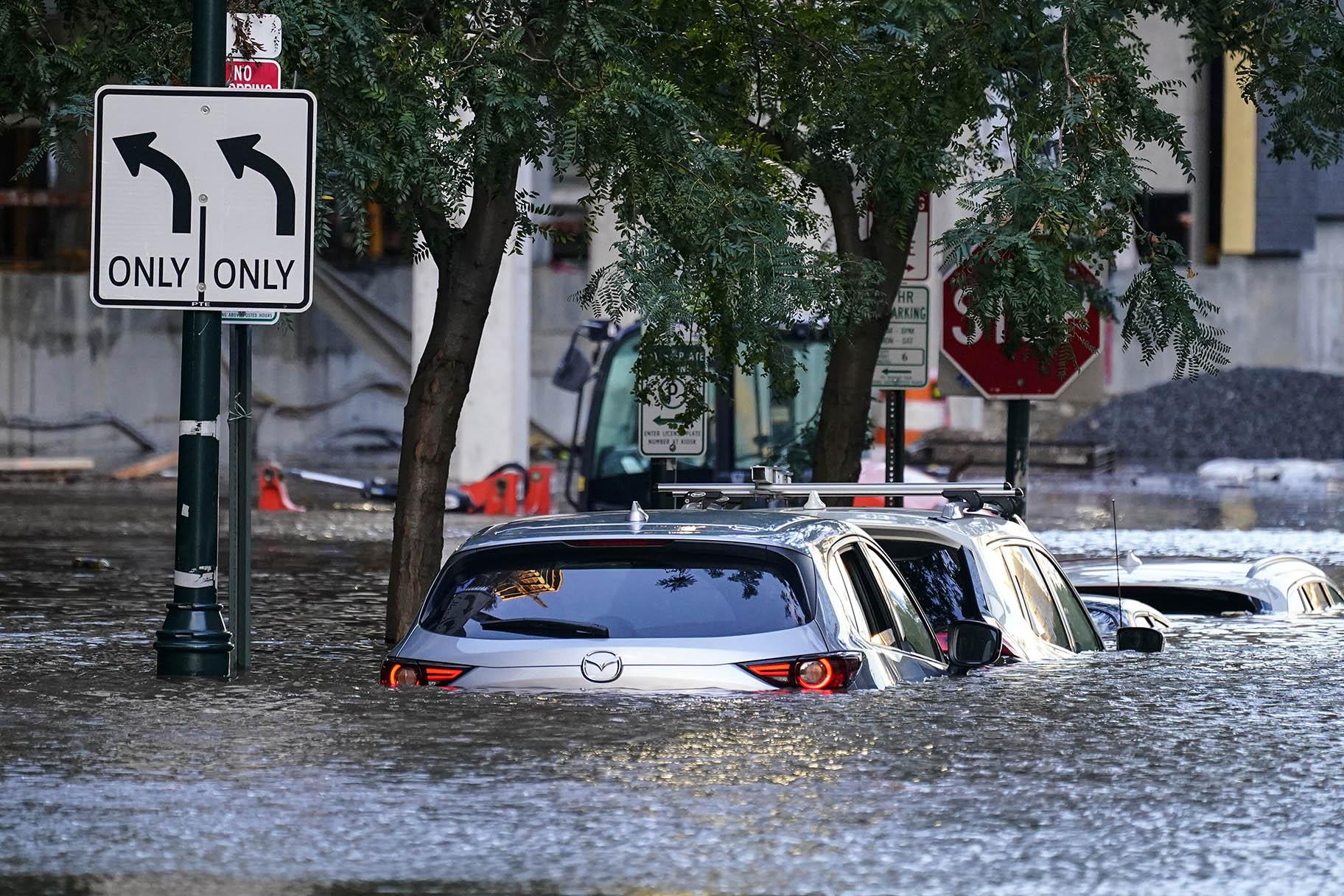 Vehicles are under water during flooding in Philadelphia, Thursday, Sept. 2, 2021 in the aftermath of downpours and high winds from the remnants of Hurricane Ida that hit the area. (AP Photo / Matt Rourke)

NEW YORK (AP) — A stunned U.S. East Coast woke up Thursday to a rising death toll, surging rivers and destruction after the remnants of Hurricane Ida walloped the region with record-breaking rain, filling low-lying apartments with water and turning roads into car-swallowing canals.

In a region that had been warned about potentially deadly flash flooding but hadn’t braced for such a blow from the no-longer-hurricane, the storm killed at least 22 people from Maryland to New York on Wednesday night and Thursday morning.

Nine people died in New York City, police said, one of them in a car and eight in flooded basement apartments that often serve as relatively affordable homes for low-income people. Officials said at least eight died in New Jersey and three in Pennsylvania’s suburban Montgomery County; one was killed by a falling tree, one drowned in a car and another in a home. An on-duty state trooper in Connecticut was swept away in his cruiser and later taken to a hospital, state police and local authorities said.

In New York City, Deborah Torres said water rapidly filled her first-floor Queens apartment to her knees as her landlord frantically urged her neighbors below to get out, she said. But the water was rushing in so strongly that she surmised they weren’t able to open the door. 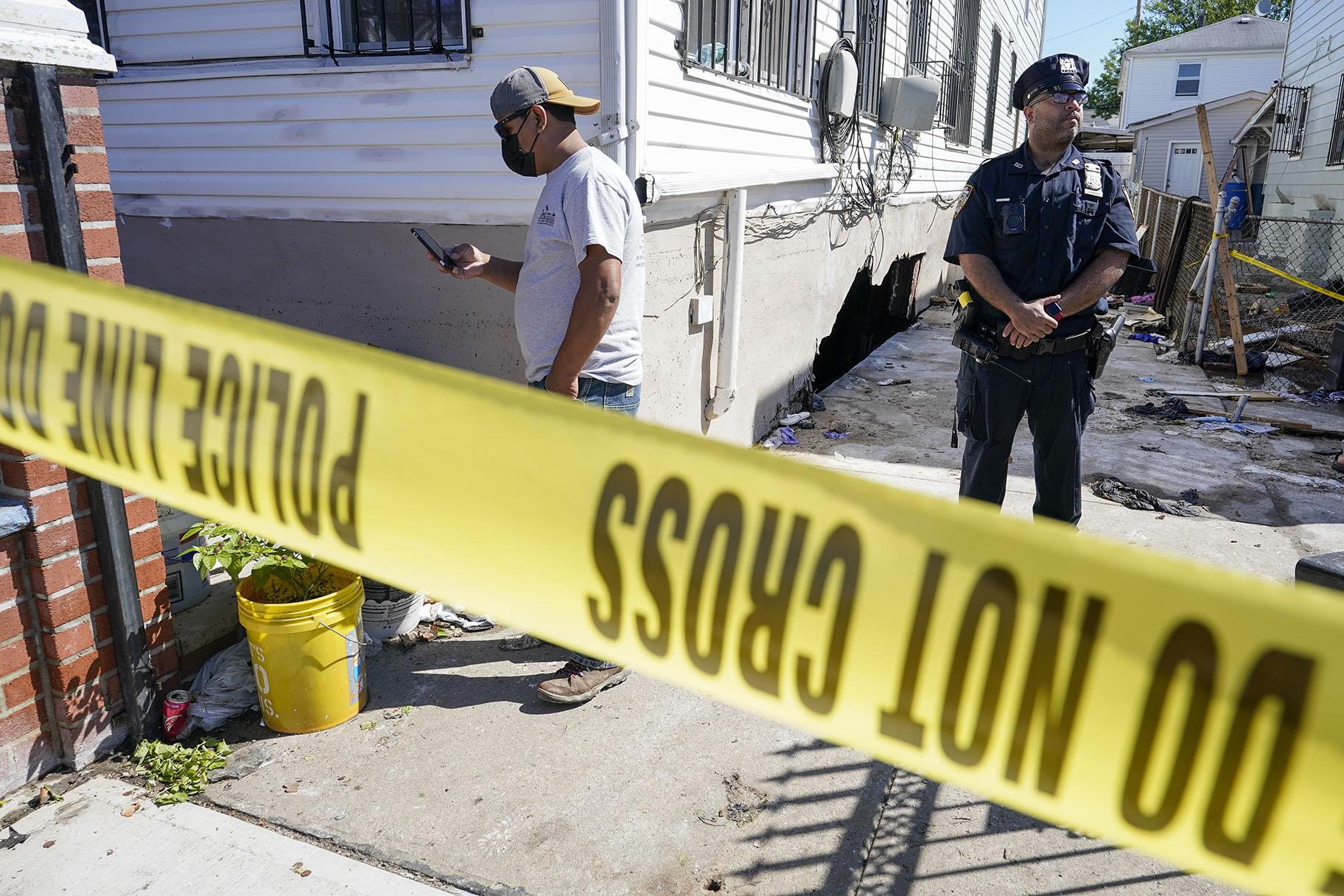 A police officer stands guard as a man survey the damage to home where people died after their basement apartment flooded in the Jamaica neighborhood of the Queens borough of New York, Thursday, Sept. 2, 2021, in New York. (AP Photo / Mary Altaffer)

“I have no words,” she said. “How can something like this happen? And the worst is that there’s a family downstairs with a baby, and they couldn’t get out.”

The remnants of Ida lost most of the storm’s winds but kept its soggy core, then merged with a more traditional storm front and dropped an onslaught of rain on the Interstate 95 corridor, meteorologists said. The situation has followed hurricanes before, but experts said it was slightly exacerbated by climate change — warmer air holds more rain — and the urban setting, where expansive pavement prevents water from seeping into the ground.

The National Hurricane Center had warned since Tuesday of the potential for “significant and life-threatening flash flooding” and moderate and major river flooding in the mid-Atlantic region and New England.

“We did not know that between 8:50 and 9:50 p.m. last night, that the heavens would literally open up and bring Niagara Falls level of water to the streets of New York,” said Hochul, a Democrat who became governor last week after former Gov. Andrew Cuomo resigned.

De Blasio said he’d gotten a forecast Wednesday of 3 to 6 inches (7.5 to 15 cm) of rain over the course of the day. The city’s Central Park ended up getting 3.15 inches (about 9 centimeters) just in one hour of the deluge, surpassing the previous recorded high of 1.94 inches (about 5 centimeters) in one hour during Tropical Storm Henri  on Aug. 21.

Water cascaded into subway tunnels, trapping at least 17 trains and forcing the cancelation of service throughout the night and early morning. Videos online showed riders standing on seats in cars filled with water. All riders were evacuated safely, officials said.

The FDR Drive in Manhattan and the Bronx River Parkway were under water during the storm. Garbage bobbed in the water rushing down streets. Some subway and rail service had resumed Thursday morning.

The ferocious storm also spawned tornadoes, including one that ripped apart homes and toppled silos in Mullica Hill, New Jersey, south of Philadelphia.

Record flooding along the Schuylkill River in Pennsylvania inundated homes and commercial buildings, swamped highways, submerged cars and disrupted rail service in the Philadelphia area. In a tweet, city officials predicted “historic flooding” on Thursday as river levels continue to rise. The riverside community of Manayunk remained largely under water.

The rain in the region ended by daybreak Thursday as rescuers searched for more stranded people and braced for potentially finding more bodies.

Heavy winds and drenching rains punched a hole in the roof of a U.S. Postal Service building in New Jersey. Rain rushed through a terminal at Newark International Airport Wednesday and threatened to overrun a dam in Pennsylvania. Meteorologists warned that rivers likely won’t crest for a few more days, raising the possibility of more widespread flooding.

Rescues took place all over New York City as its 8.8 million people saw much worse flooding than from Henri, which was followed by two weeks of wild and sometimes deadly weather across the nation. Wildfires are threatening Lake Tahoe, Tropical Storm Henri struck the Northeast and Ida struck Louisiana as the fifth-strongest storm to ever hit the U.S. mainland, leaving 1 million people without power, maybe for weeks.

Amtrak service was canceled between Philadelphia and Boston.

At least 220,000 customers were without power in the region at one point, with most of the outages in New Jersey and Pennsylvania.

Southern New England awoke Thursday to inundated roads, commuter delays and an ongoing flash flood warning. Some students at Yale University in New Haven, Connecticut were forced to relocate from their dorms. In Plainville, Connecticut, authorities said they used boats to rescue 18 people from a flooded neighborhood.

A section of Route 24 in southeastern Massachusetts was shut down because of water on the highway. In Portsmouth, Rhode Island, a road crumbled under the onslaught of rain.

Parts of Johnstown, Pennsylvania, where 2,200 people died after an infamous dam failure in 1889, were evacuated for a time Wednesday after  water reached dangerous levels at a dam near the city. An official said later Wednesday that the water levels near the dam were receding.

In Frederick County, Maryland, first responders used a boat to rescue 10 children and a driver from a school bus caught in rising flood waters. The county’s school superintendent faced criticism for not dismissing students early. He apologized, saying the decision to remain open led to “stress and anxiety for many,” The Frederick News-Post reported.

The Atlantic hurricane season is far from over. Larry became a hurricane Thursday morning, forecast to rapidly intensify into a potentially catastrophic Category 4 storm by Sunday. The National Hurricane Center in Miami said it’s moving west but remains far from any coast. 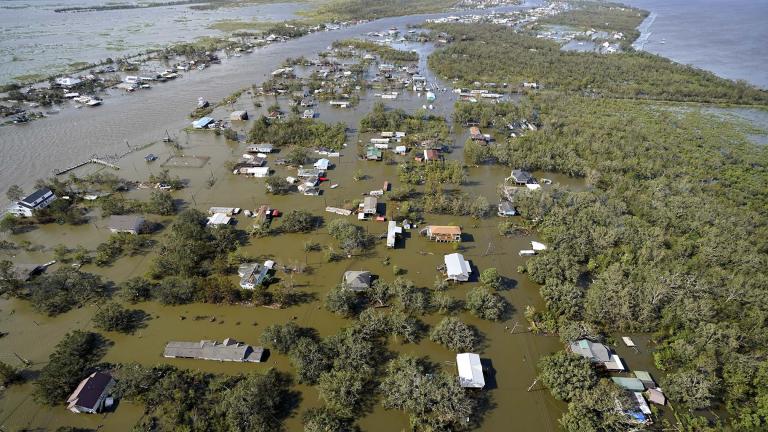 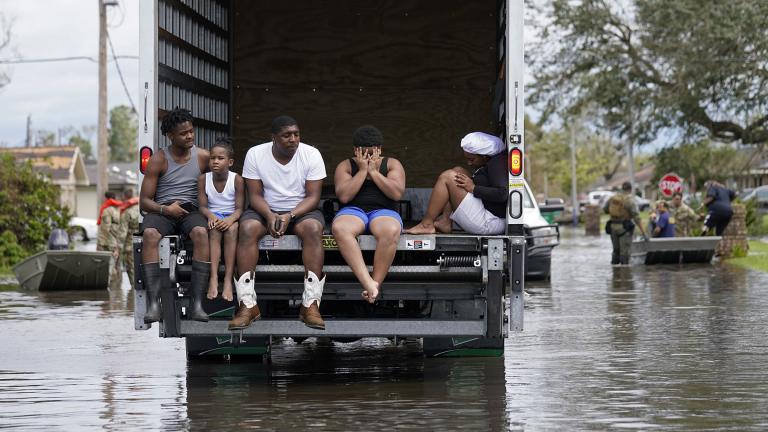 The Dog Days Are Over, With Drier Air and Cooler Temps Forecast This Week