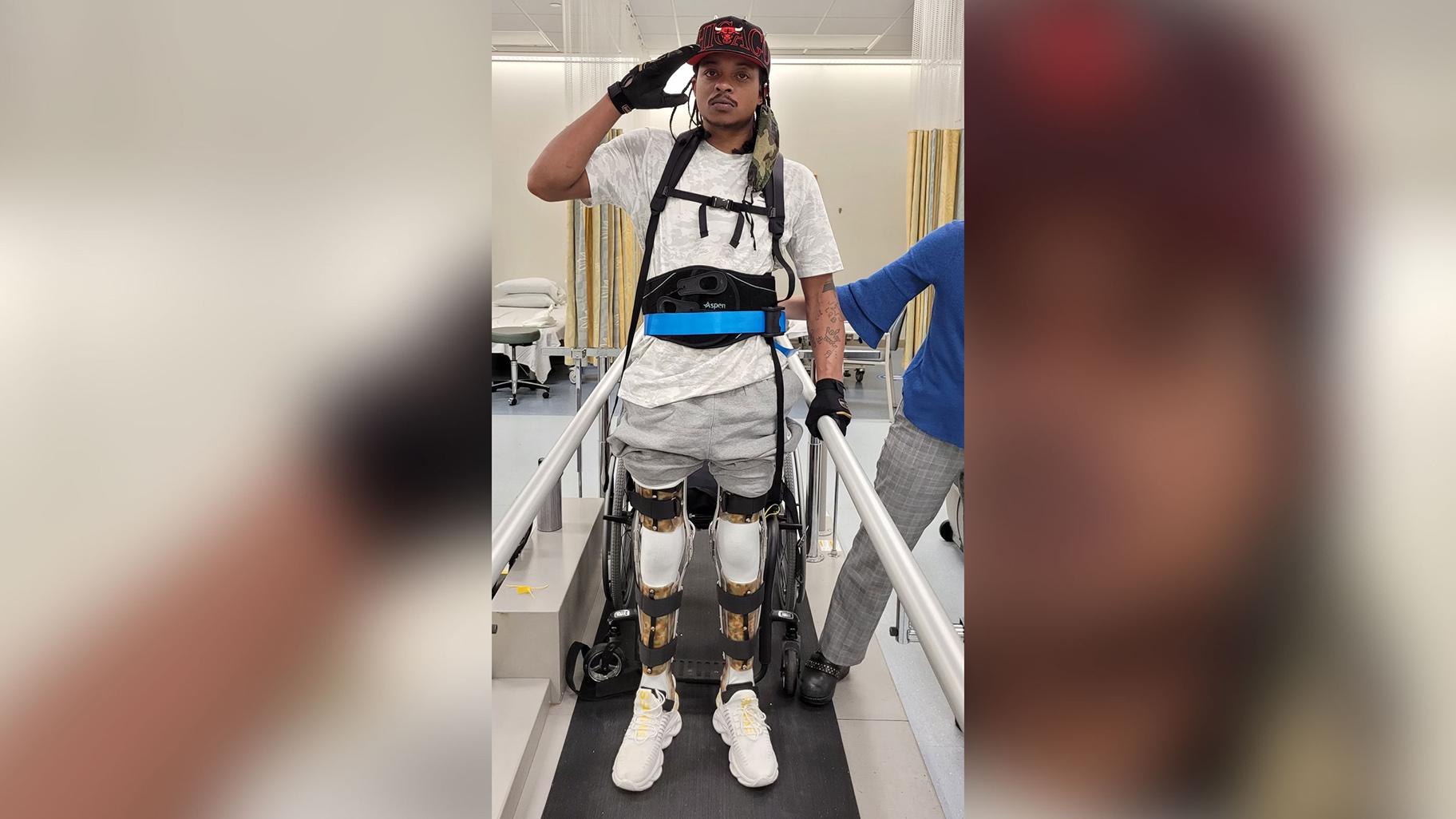 (CNN) — During the Fourth of July weekend, Jacob Blake says he called 911 over what he later realized was an anxiety attack.

The fireworks triggered what he felt had been a crescendo of pain over a difficult and turbulent year, particularly when it came to gun violence. Blake was in the Chicago area that weekend with family.

He says the anxious episode “was the most painful experience” since he was shot seven times in his side on Aug. 23, 2020 by Kenosha Police Officer Rusten Sheskey after he and two other officers responded to a call for a domestic incident.

A year later, Blake tells CNN that he didn’t want to call 911 during the holiday, but he had no other option.

“Before we even got to the 4th of July, the weekend was bloody already, Blake says. “I was watching all of my people dying.”

A year ago, Blake watched from his Wisconsin hospital bed as his story — his barely lived experience — played on a nearby TV.

“It made the pain worse,” Blake tells CNN.

Since then, he estimated he’s watched himself get shot roughly 300 times.

Blake’s shooting came toward the end of last summer, which started with the killing of George Floyd and the nationwide protests that followed.

Coming in and out of consciousness while initially handcuffed to the bed around that time, Blake remembers seeing the hundreds that took to the streets in his name.

Many of the nights of demonstrations in Kenosha, Wisconsin, and other parts of the US, ended in clashes with police, violence, and even extensive fires.

“I didn’t agree with what they were doing, but I understood,” says Blake, as he recalls what happened after Rodney King was brutally beaten by the Los Angeles Police Department in 1991.

Blake even remembers talking about Floyd, and the aftermath of his murder, in the weeks leading up to his own shooting. Floyd was killed by former Minneapolis Police Officer Derek Chauvin in May 2020, nearly four months to the day before Blake was shot.

‘I don’t have the physical strength to be upset’

A year later, he feels nothing is different in terms of policing and the general divisiveness of the world, but he’s determined to change that.

“Yeah, I’m here, and yeah I’m about to be walking, but I really don’t feel like I have survived because it could happen to me again,” Blake says. “I have not survived until something has changed.”

Today Blake is proud to even be able to stand, much less walk.

Blake tells CNN he was able to take a few steps during his son’s birthday celebration on August 23 this year, an effort that came on the other side of months of physical rehabilitation.

“At one point it felt like someone was sliding my legs through a woodchipper,” he says, even as he pointed to improvements. “It’s been progress every two weeks…it made it easier for me to be like I’m healing.”

The healing process, however, has had to come on multiple fronts, both physically and mentally.

“I’m still going through a lot of pain,” Blake says. “Last week I was up for three days straight, slept for a whole day.”

It takes a toll on his day-to-day life, one that he told CNN is driven by his Christian faith, but also one where his physical body and his daily mindset are traumatically intertwined.

“When I fall into depression, which I have, it makes my body hurt,” Blake says. “I don’t have the physical strength to be upset.”

Coping with the ‘band-aid effect’

Few residents of Kenosha ever expected their hometown to join the list of American cities whose names have become buzzwords for police shootings and unrest.

The city of about 100,000 people is midway between Chicago and Milwaukee.

“You ride through Kenosha you still see the remnants of that tragedy every day,” says Ardis Mosley, 72, who was born and raised in Kenosha and works as a parent teacher liaison for the Kenosha Unified School District.

Mosley tells CNN, however, she felt much of the momentum around August 2020 seems to have dwindled, or at the very least slowed, and that it fell victim to a familiar “band-aid effect” that “will never work.”

“It’s like Halloween, you put on a costume, and then after the day or in the morning you’re back to yourself,” Mosley says. “It’s not fair to say the total population has moved on because they haven’t…the movement is active but it’s just not as visible.”

Wisconsin Gov. Tony Evers called on the Wisconsin National Guard to respond in Kenosha in the days after Blake was shot, as part of a difficult year “especially for the Kenosha community,” and especially for Blake.

“While we are grateful Jacob survived his injuries, we also know Jacob, his kids, and his family have and will face challenges they never imagined having to endure,” Evers wrote in a statement this week.

No charges for the responding officers

An investigative report released in January offered an up-close look at Blake’s shooting.

“It is my decision now that no Kenosha law enforcement officer will be charged with any criminal offense based on the facts and laws,” Kenosha County District Attorney Michael Gravely said, a little over four months after Officer Sheskey shot Blake.

In part because Blake was armed with a knife and that in the moment before Officer Sheskey opened fire, “Jacob Blake twisted his body, moving his right hand with the knife towards Officer Sheskey,” Gravely cited from his lengthy report.

Laquisha Booker, the mother of Blake’s children, initially called police that day telling dispatchers Blake had taken the keys to her rental car and would not return it. According to the Kenosha County District Attorney’s report, she feared Blake “was going to take her vehicle and crash it.”

Blake’s shooting was not captured on body camera video since the Kenosha Police Department did not wear them at the time. However, after the city council voted unanimously in support of adding body worn cameras this month, the department is anticipated to begin using them in the field as early as October.

According to a Kenosha Police spokesperson, they are purchasing 189 body-worn cameras.

Meanwhile, the Kenosha County Sheriff’s Office told CNN all of its deputies and supervisors have been outfitted with body cameras and “they’ve been great.”

Despite never being charged at the state level, the US Attorney’s Office representing the Eastern District of Wisconsin announced in January 2021 their federal civil rights investigation into the shooting of Blake is ongoing, conducted in part by the FBI, and overseen by prosecutors from the U.S. Attorney’s Office and the U.S. Department of Justice’s Civil Rights Division.

A spokesperson would not comment to CNN on the status of the investigation.

When Kenosha Police initially responded in August 2020, Blake had a warrant for his arrest from a prior incident where he was charged with domestic violence offenses and sexual assault, according to the Kenosha County District Attorney’s Office.

Blake has since pleaded guilty to two misdemeanor counts of disorderly conduct, stemming from the domestic violence related charges, while the other charges were dismissed. He was sentenced to two years of probation on each count, to be served concurrently, court records show.

This week also marks the anniversary of Kyle Rittenhouse allegedly killing Anthony Huber and Joseph Rosenbaum on the outskirts of protests on August 25, while wounding a third person, Gaige Grosskreutz.

Rittenhouse now faces two felony charges of murder in their deaths and a felony attempted murder in Grosskreutz’s wounding with an expected trial date of November 1.

Blake vividly remembers when that happened.

“That was like a kick right in the you know what,” Blake tells CNN. “I was angry, I was furious, and I felt like I had every right to be.”

“For the reasons they said they shot me, they had every reason to shoot him, but they didn’t,” Blake adds. “Honestly if his skin color was different, and I’m not prejudiced or a racist, he probably would have been labeled a terrorist.”

Rittenhouse was later arrested and released on $2 million bail, where he remains at an undisclosed location awaiting trial.

Hoping for change, one painstaking step at a time

Blake is cynical about the progress made in policing, community, and the general hatred over the past year in the aftermath of Breonna Taylor and Floyd killings along with his own shooting. But he’s not without hope.

It’s why he’s among the co-founders of Edifye, a non-profit created after the nearby Milwaukee Bucks refused to leave their tunnel before an NBA game in the summer of 2020 in protest of the Blake’s shooting. The group works to raise money for communal bail and legal funds, organize community events, combat modern redlining, and more in part through partnerships with professional athletes.

“I don’t want to just sit back cooling out, I just want to help these kids,” Blake says. He is especially motivated after the conviction of Chauvin, the former Minneapolis Police Officer serving a 22.5-year sentence for murdering Floyd.

“That hurt everybody, I’m worried about my children, what future do they have in this?” Blake says. “This man traumatized the world by killing a man in slow motion.”

“It’s absurd the hate that’s in the world,” he says.