The sound of a neighborhood barber shop – friendly chatter, clippers buzzing and scissors snapping – is unmistakable. But folks getting a trim at Del Pueblo Barbers & Records are also hearing the soundtrack of a Midwestern Mexican childhood – from vintage rancheras to Chicago house.

“I remember there was a bar on Racine when I was a little boy and a lot of people from Texas are in Chicago. So the big Texas sound of like, Little Joe and the Family and Flaco Jimenez and things that, what they call cantina music,” recalls barber and Del Pueblo co-owner Jonathan Guzmán. “I just remember getting my aunt to tell me, ‘Go tell your uncles that dinner is ready,’ and I already knew where to go get them because they were all sitting down at the bar.”

He says those sounds were just part of growing up Chicano in Chicago.

“There’s a Chicago Midwestern Mexican, which stands alone and we’re one of a kind. We maintain our identity, but when we speak English, we sound like we’re from the West Side. When we dress, we got the Sox hat. You know, we’re very Chicago, very American, very urban. I would put Chicago Mexican culture up against any Texas or California Mexican culture,” Jonathan said.

His skill in the tonsorial arts also stems from his childhood.

“I started cutting hair out of necessity. We didn’t have the money to go to a shop every two weeks and get a haircut so my mom had hair clippers and shears, she would cut my hair, but she would cut my hair in a way I didn’t want it. So I learned to cut my own hair. And then my friends in the neighborhood who were also in the same situation decided that I was going to be the guy who would cut their hair.” 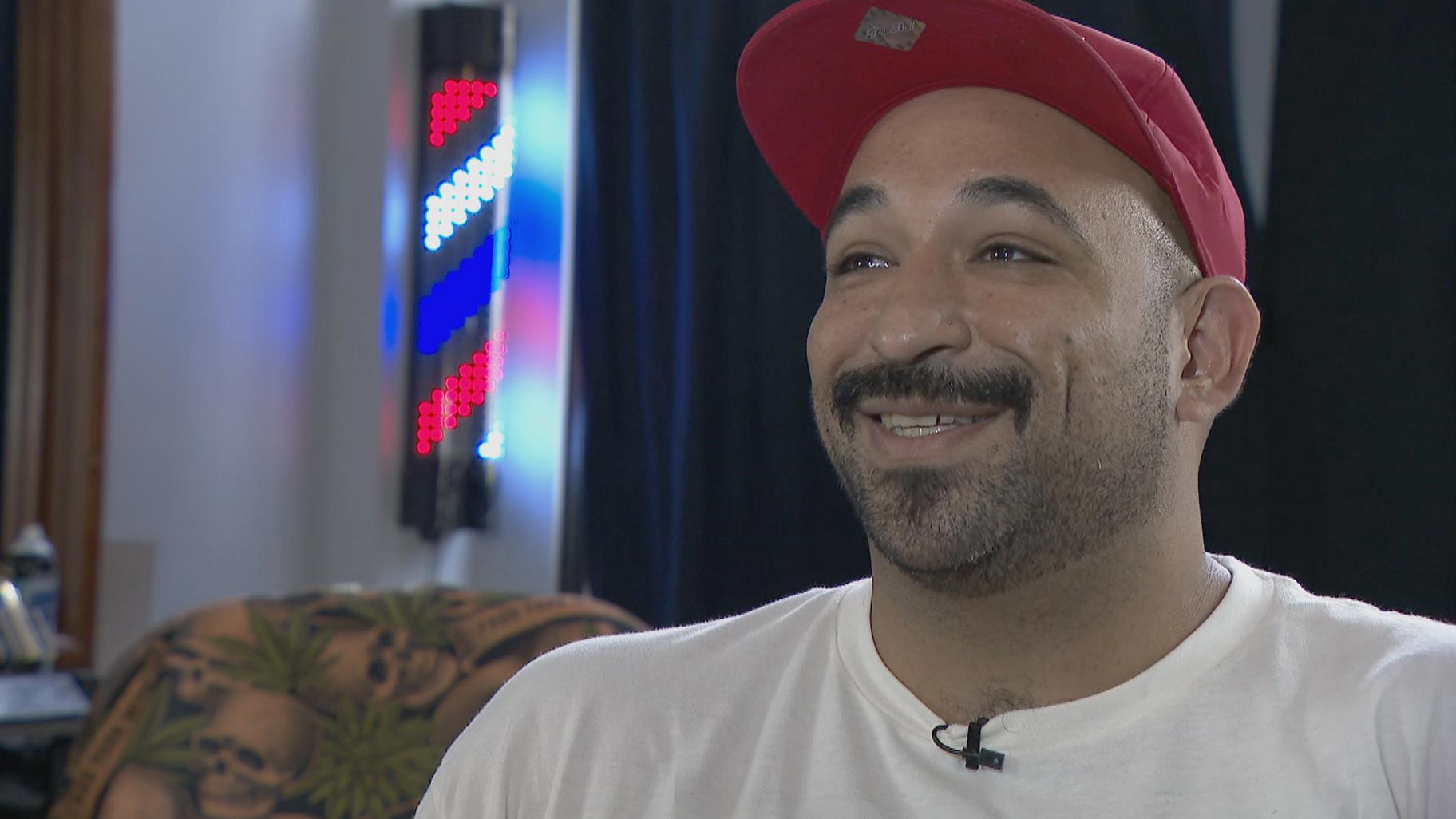 “There’s a Chicago Midwestern Mexican, which stands alone and we’re one of a kind. We maintain our identity, but when we speak English, we sound like we’re from the West Side,” said Del Pueblo co-owner Jonathan Guzmán. (WTTW News)

When the opportunity arose to open a shop in the heart of Little Village in July 2020, Jonathan, and his business partner Leo Guzmán (no relation) jumped at the chance to create a place where the Midwestern Mexican would feel right at home.

“We do things a little different, I’ve noticed here, than other cities,” says Leo Guzmán. “We’re very proud of who we are in Chicago. And I think that’s what community is all about, right, is making other people feel like you’re one of them, you know? And I definitely feel that here. I might not look 110% Mexican. They call me guero for a reason, but definitely, you know, it feels like home.”

All around the shop are sounds and signifiers of Chicago Chicanos – from the locally-made art and merchandise for sale to the vinyl records they sell and play on an in-store turntable. Leo Guzmán, who also DJs, manages the music collection.

“Our collection basically is made up of Latin American music. We try to focus on norteñas, mariachi, rancheras, tropical music from cumbias to salsas,” Leo said. “We have music from Tigres del Norte, Broncos Reynosa, where they mention Chicago, they mention certain streets, they mention Little Village. And that’s really what I like, I like to tell a story through music. And a lot of music that we try to play here is also new, we try to promote new bands.”

As for the art and merchandise on display, Jonathan Guzmán says he wanted to keep his shop as homegrown as possible.

“I don’t want to sell brands that have nothing to do with me,” Jonathan said. “Everything is done locally from the beginning to the end, except probably for the actual making of the t-shirts, which are probably made in China – I’m sorry. Everything else is done here, and it’s providing income for everybody.” 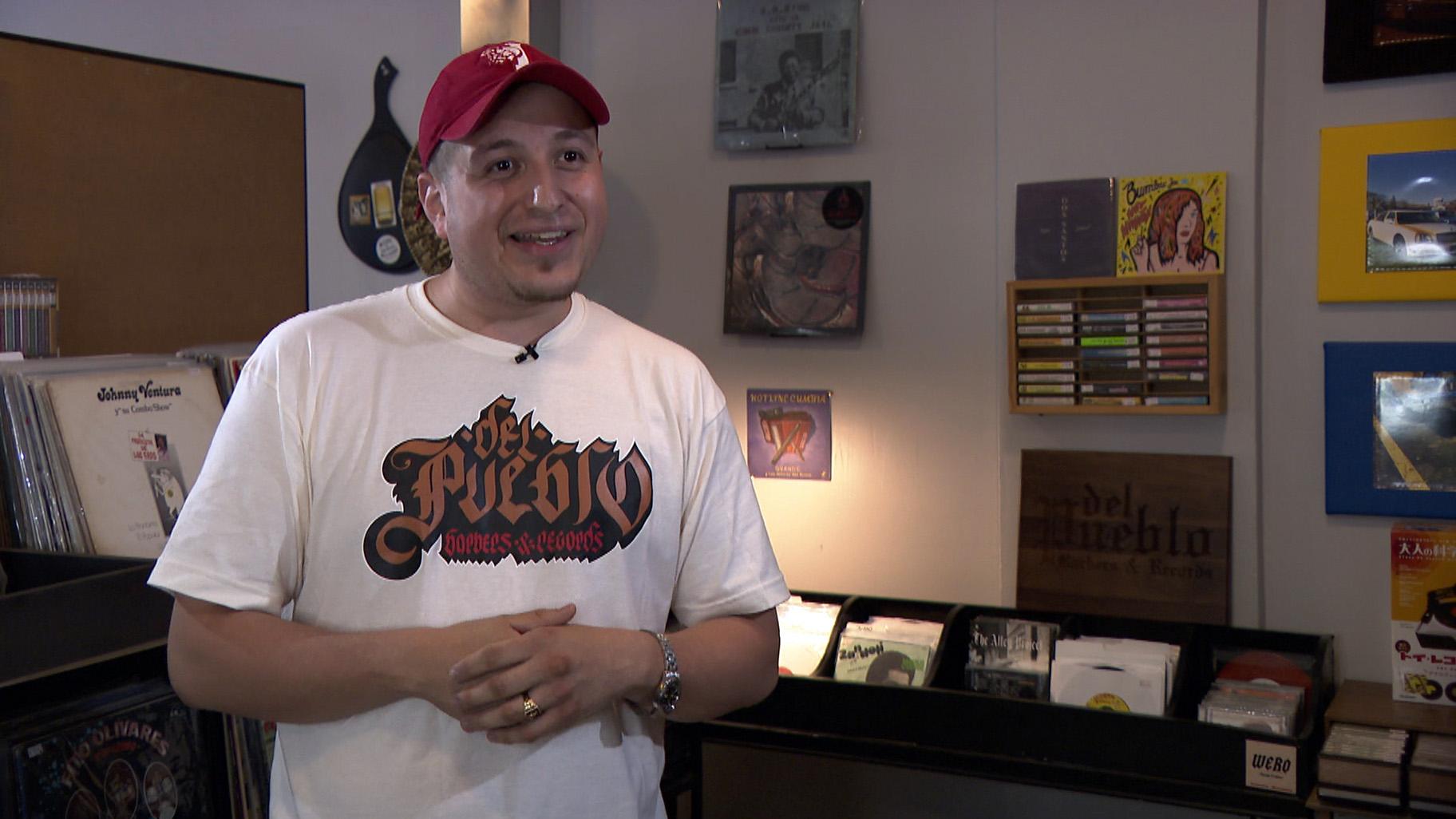 “We have music from Tigres del Norte, Broncos Reynosa, where they mention Chicago, they mention certain streets, they mention Little Village. And that’s really what I like, I like to tell a story through music,” said Del Pueblo co-owner Leo Guzmán.

Jonathan and Leo say they’re hoping Del Pueblo can be a place for Chicagoans – Chicano or not – to celebrate the unique blend of cultures that is Little Village and preserve it for future generations.

“It’s a safe space for you to come by and socialize and get creative, ultimately,” says Leo Guzmán. “I encourage everybody to come by, share their music with us too, because that’s ultimately what the space is for, to keep that culture flowing, and keep the next generation interested.”